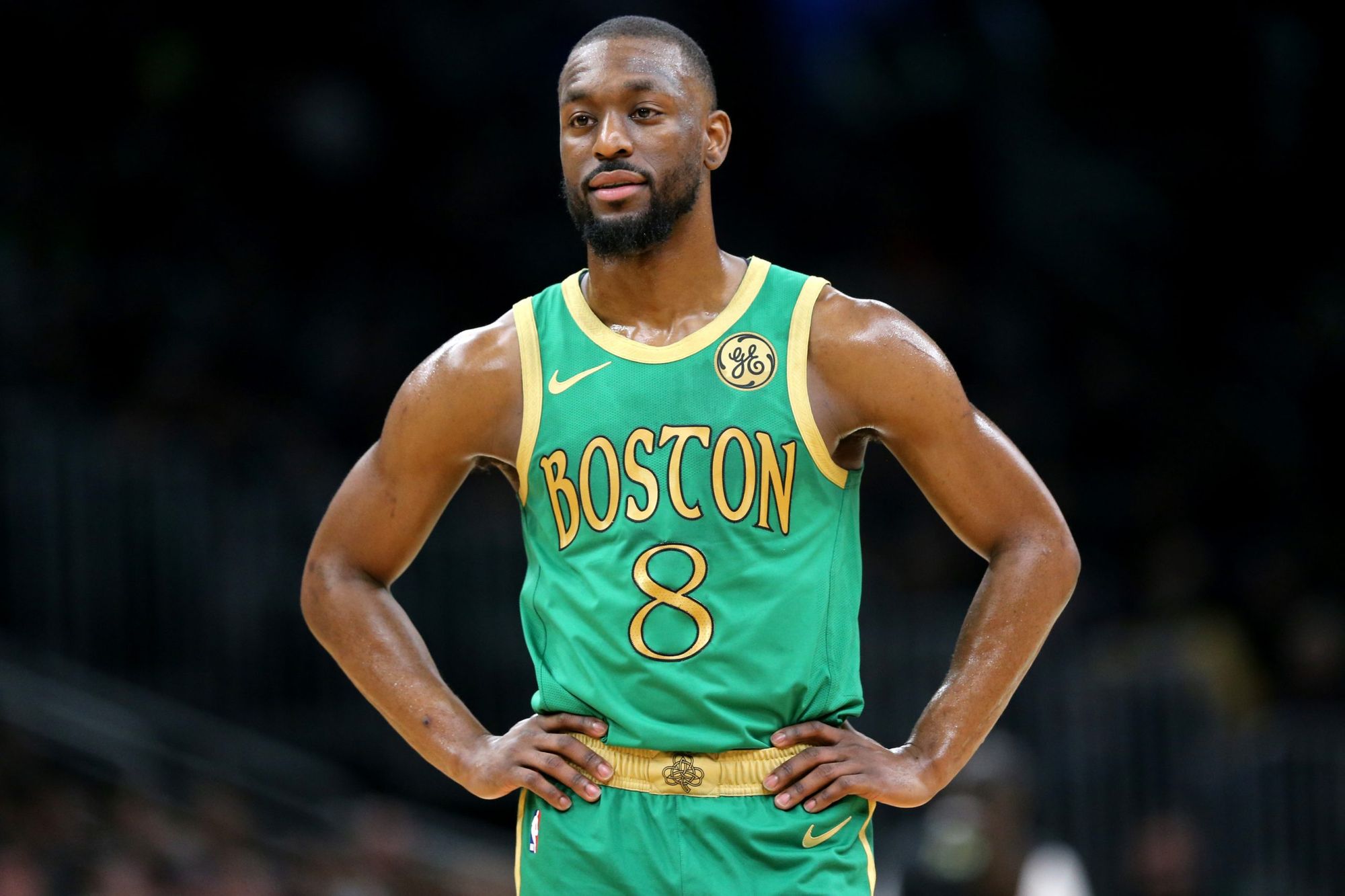 The Boston Celtics will be shorthanded to start the 2020-21 NBA season as they will be playing without starting point guard Kemba Walker. According to Tim Bontemps of ESPN, Walker will be out with a knee injury until at least January after the All-Star point guard underwent procedure this offseason.

The team announced that Walker, who is coming off his first season in Boston, underwent a stem cell procedure to treat his knee injury and will have a 12-week strengthening program. Walker has been dealing with knee injury for some time already, and there are concerns about the lingering issue. Ainge admitted that he cannot tell at this point if it will still be a long-term problem, but it will likely be all clear after the upcoming season.

"I think this year will tell us a lot more," Ainge said in a news conference. "He saw some specialists over the last six or eight weeks, and they all came to the same conclusion, and I think that gave Kemba a great peace of mind as he went to different, really good doctors in our country and got the same opinions. He's on a program, and he seems to be in a very good, happy spot."

Walker signed a four-year, $140.8 million contract with the Celtics last year after spending the first eight seasons of his career with the Charlotte Hornets. The 30-year-old point guard replaced Kyrie Irving, who opted to leave the Celtics and sign with the Brooklyn Nets in last year's free-agency period.

The former UConn standout had a solid first season in Boston stats-wise, as he posted 20.4 points to go along with 4.8 assists and 3.9 rebounds per game. However, he was slowed down by knee issues after the All-Star break and before the season was halted by the pandemic.

The four-time NBA All-Star returned during the NBA Restart inside the bubble in Orlando and showed signs of progress in the postseason. Walker looked healthy early in the playoffs but looked out of rhythm after a hard fall in their second-round matchup against the Toronto Raptors. Ainge said that they might have committed a mistake in making him return in the bubble, which is why they are determined to take a cautious approach this time.

"Maybe we didn't do him justice by bringing him back too fast into the bubble, being  hurt and finding some urgency to get him ready during the regular season," Ainge said. "We don't want to make that mistake, if it even was a mistake, this time. I'm not blaming anybody. It's not a perfect science. It's guesswork, and we're trying to do the best with the information that we have and get him as strong and healthy as he can be."

Without Walker, the Celtics will have to rely on veteran playmaker Jeff Teague, who signed a one-year deal worth $2.56 million this offseason. The 32-year-old point guard split the previous season with the Minnesota Timberwolves and the Atlanta Hawks, posting 10.9 points and 5.2 assists per game.

Teague, who will be playing in his 12th season in the league, is no longer one of the top point guards in the league but could play a big role for the Celtics early in the season. According to Jay King of The Athletic, Teague gives the Celtics some insurance policy just in case Walker misses a lot of time next season due to his lingering knee issues. The veteran point guard could also be an excellent presence inside the locker room.

"He can take on a bigger role if Walker needs to miss time, then guide the second unit once Walker’s ready for a full slate of minutes," King said of Walker. "For Boston, having that security blanket could be a big deal. The rapid offseason was bad news for Walker, who could have used more time off to strengthen his knee. The Celtics have already indicated they plan to exercise caution with the All-Star during training camp and beyond."

The Celtics could also ask Marcus Smart to play point guard if Teague fails to live up to expectation. King said that while Teague can still help with his playmaking abilities and experience, several people expressed concerns about his vulnerability. Sources told King that Teague commits a lot of mistakes on both ends of the floor that usually leaves the coaching staff frustrated.

Brooklyn Nets superstar Kevin Durant sounded very eager to return to action after missing the entire 2019-20 NBA season. Durant had to sit out the entire year after sustaining a torn Achilles tendon during Game 6 of the 2019 NBA Finals between the Golden State Warriors and the Toronto Raptors. The former NBA Most Valuable Player revealed that his road to recovery was not too easy.

Durant said that he has been through a lot of injuries and surgeries earlier in his career, but the Achilles tear and the rehab after the surgery is by far the hardest experience for him. He said that he had to start from scratch, as he had to learn how to walk, run, and jump again. The two-time NBA champion pointed out that Achilles tear is very complex because a player has to build it back up being one of the strongest ligaments in the body.

"Learning how to walk again, not walking and getting assistance in everything you do those first 3-4 months was tough. I’ve been through surgeries and injuries before, but the longest recovery I had was three months," Durant said via Basketball News. "The first days of the Achilles was three months long. Couldn’t walk or run, had to  use a scooter, so I think those milestones, and learning how to walk, run and jump             again, that’s underestimated."

The 32-year-old superstar has already participated in recent team workouts, saying that he is feeling good after the long layoff. The former Texas standout added that he had offseason workouts with other NBA players like John Wall, where he did not hold back. He pointed out that he is not worried about his previous injury, saying that he will go as hard as he can in his first season with the Nets.

Following the disastrous end of his stint with the Warriors, the Nets showed commitment to Durant despite knowing that he will be out at least for one season. Brooklyn signed the former second-overall pick to a four-year, $164.25 million, including a player option before the 2022-23 NBA season. Durant will look to pick up from where he left off before the injury, as he posted 26.0 points on top of 6.4 rebounds and 5.9 assists for the Warriors.

Nets guard Landry Shamet, who was recently traded to Brooklyn from the Los Angeles Clippers, liked what he saw from Durant and Irving. Irving also missed the majority of last season due to a right shoulder injury. Shamet said that only Durant and Irving can tell their exact status after the injuries, but based on what he saw, both superstars are ready to roll for the upcoming season.

"They looked great. KD looks great. Kyrie looks great," Shamet said via New York Daily News. "I’m not them though so I don’t know where they’re at or what more is left, if they’re there all the way recovered from the injury. But from the outside looking in, they look really good."

But while Durant signs is showing signs of his old form in recent workouts, Nets head coach Steve Nash said that they are not planning to throw him into the fire immediately. Nash, who will be making his coaching debut in the upcoming season, said that there is no load management or minutes restriction plan for Durant. However, the rookie coach said that they will be very careful.

"We have to be very careful with him and his adaptation process back into the game," Nash said via CBS Sports. "Kevin's done everything you could've ever asked to put himself in this position. He is truly a gift for all of us with not only his talent but his love for the game and the joy he brings in the building every day. Perhaps we have to protect him from himself in a way because he brings so much joy and passion to the sport."

Nash said that Durant is so eager and hungry for action, but he echoed the superstar's statement, pointing out that an Achilles tear is one of the toughest injuries to recover from. The upcoming season will be shortened from the regular 82 games to 72 games, but he still thinks that Durant will not be able to play all games in the regular season.

It might be a different story, though, when they reach the playoffs, as the former NBA Most Valuable Player said that his main goal in his first season as coach is to compete for a championship immediately. His transition to coaching is expected to be seamless as well with veteran coach Mike D'Antoni and former Nets interim coach Jacque Vaughn assisting him in the upcoming season.