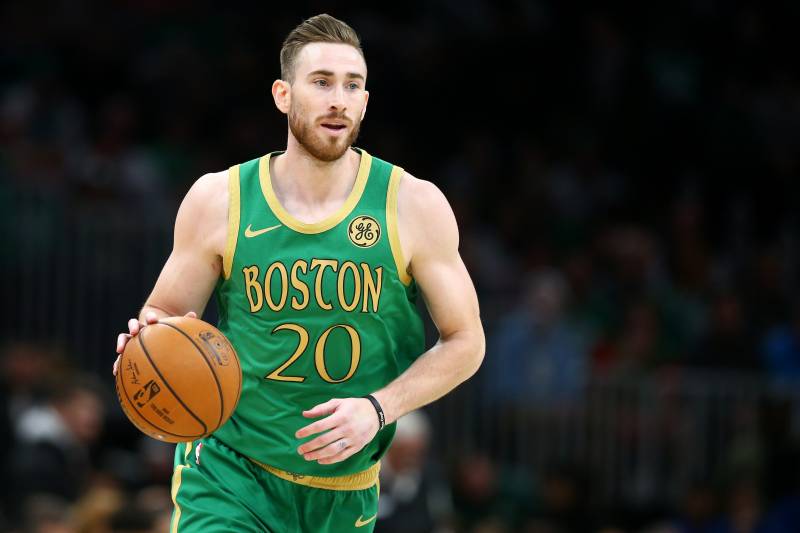 The Boston Celtics camp received an exciting news as all-around forward Gordon Hayward is set to return to basketball activities. MassLive.com’s John Karalis reported that the 29-year old former All-Star could return as early as Monday when the Celtics go up against the Cleveland Cavaliers.

When Hayward broke his left hand in a match-up against the San Antonio Spurs a month ago, the team’s medical staff initially plotted a six-week recovery period for him. Fortunately, his hand healed faster and he even participate in his first full practice with the squad after sustaining the injury.

While this is indeed an exciting development for the veteran forward and the team, Hayward reiterated that his hand isn’t fully a hundred percent healed just yet.

“I’m still guarding and it’s going to be like that for a little while... part of that is getting out there and playing and getting over it mentally. It’s almost like playing through the pain, the tissues that I have in my hand, those are a lot slower to recover, so those are going to be sore a little bit. Motion and strength is going to take a little  while to get back.”

Of course, this is not the first time that Hayward has gone through the rigors of recovering from an injury. He had that horrible ankle injury in his first game with the Celtics in 2017, forcing him to sit out that season. He came back healthy last year, but he was not in his usual aggressive self anymore.

However, Hayward has returned to form this season, displaying the all-around game that earned him an All-Star appearance while still playing for the Utah Jazz. He is norming impressive numbers of 18.9 points, 7.1 rebounds and 4.1 assists per contest, while shooting a spectacular 43% clip from beyond the arc. His much-improved production this year was highlighted by a brilliant showing of 39 points, 7 boards and 8 dimes in a win over the Cavaliers.

Celtics head coach Brad Stevens is still uncertain on whether his versatile gunner can make his comeback on Monday. But Stevens says that the positive takeaway is that Hayward can already do everything when he went through his first full practice since the injury.

“We didn’t obviously do much, but he got through everything. We didn’t go any live segments with players. We worked in small groups, but nothing 5-on-5 … [We’ll] see  how it feels and then go from there with whatever they’ve got planned for him.”

The Celtics are currently sitting on an impressive 16-5 record to start the season, good for the second seed in the Eastern Conference. In the absence of Hayward’s scoring and playmaking, the team’s young duo of Jayson Tatum and Jaylen Brown have been playing the best basketball of their young careers. Newly-acquired star point guard Kemba Walker has been very consistent, while defensive ace Marcus Smart has provided the spark on both ends of the floor.

Two-time Most Valuable Player Stephen Curry has just went through a second surgery on his broken left hand, as reported by The Athletic’s Shams Charania.

“Warriors’ Stephen Curry has undergone a second surgery on his broken left hand to remove pins from first procedure, league sources tell @TheAthleticNBA @Stadium. Curry is still on track to be re-evaluated in February.”

It is a crucial step towards a full recovery for the Warriors superstar guard, who sustained the injury in a match against the Phoenix Suns during the team’s fourth game of the season. It was a tough setback for Curry and squad as his backcourt partner Klay Thompson is still recovering from a Torn ACL injury he suffered in last year’s Finals.

With Curry and Thompson sitting out, the Warriors have been racking up the losses this season. They have only won five of their 24 games this year, as the team has also went through a string of games with all-around star Draymond Green and recently-acquired All-Star guard D’Angelo Russell also hounded with injuries.

There’s no doubt that a shot at the playoffs is already far down the road for the Dubs. Curry said that he is still focused on returning at some point this season, although that should be after the All-Star Weekend already. Klay also doesn’t have a clear timetable for a return, prompting speculations that the Splash Brothers may have to sit out the rest of the season.

In an interview with NBC Sports’ Monte Poole, Curry said that this has been his first major injury in a long while. He has gone through consecutive ankle injuries earlier in his career, a difficult hurdle that he has successfully overcome. However, the three-time NBA champion still finds it difficult to be sitting out there and not being able to help his teammates on the court.

“It’s just hardest on your competitive spirit. When you get around basketball and get around the locker room with the guys, that’s the part I miss the most. And I love to play.

Three months is -- and I’d only played three-and-a-half games -- just weird. It’s unfamiliar territory. I’m enjoying the downtime, because it was unheard of, in my   experience, in the middle of a season. It’s just weird.”

But then again, the rest could also be a welcome sight for Curry. He and the Warriors have gone to five straight trips to the championship, and the grind of the playoffs could be taking its toll on the 31-year old point guard. It’s completely understandable that the Warriors organization are taking a cautious approach on their franchise player’s recovery. Shutting him down for the rest of the year may even be a logical plan. The Warriors are on pace on securing a Top 5 pick in the draft, although team owner Joe Lacob emphasized that the team will never tank for a prized rookie prospect. The likes of LaMelo Ball, R.J. Hampton, Cole Anthony and James Wiseman are among the top projected names in next year’s draft.

Already hounded with injuries on their roster, the Blazers suffered another one during a Friday game against the Los Angeles Lakers. Scoring swingman Rodney Hood has sustained a Torn Achilles injury and should be out for the rest of the season. Blazers star point guard Damian Lillard expressed his remorse on his teammate’s unfortunate setback, as per Nick Friedell of the ESPN.

"It's tough, man. You hate to see injuries in the league, period. You hate to see one of  your teammates go down to an injury like that, especially a starter and somebody that was really a good person having a great season, fitting in really well with our team, a big part of what we do. You feel for him personally more than anything. Just sad to see that happen to him."

The 6-foot-8 lefty scorer is norming averages of 11.0 points and 3.4 rebounds, while shooting a very high 49% clip from three-point territory. Since his excellent showing during the Blazers’ cinderella run last playoffs, Hood has secured a consistent starting role on the team.

Carmelo Anthony, who was recently signed by the Blazers to shore up their depleted squad, couldn’t hide his sadness on what happened to his teammate.

"Sad, sad. Unfortunate. You forget all about the actual game and realize how wins and losses really don't even mean anything at this particular moment. It puts a lot of things in perspective to lose a guy like that. ... He was playing at an all-time high level, having a career start to this season. And just snapping a finger [his] season is gone right now, so we shouldn't even be talking about basketball right now."

In 21 games this year, Hood has averaged 29.5 minutes per game, just trailing Lillard and CJ McCollum in that department. With Hood out of the line-up, expect Blazers head coach Terry Stotts to give more minutes to Kent Bazemore, Mario Hezonja and even rookie forward Nassir Little.