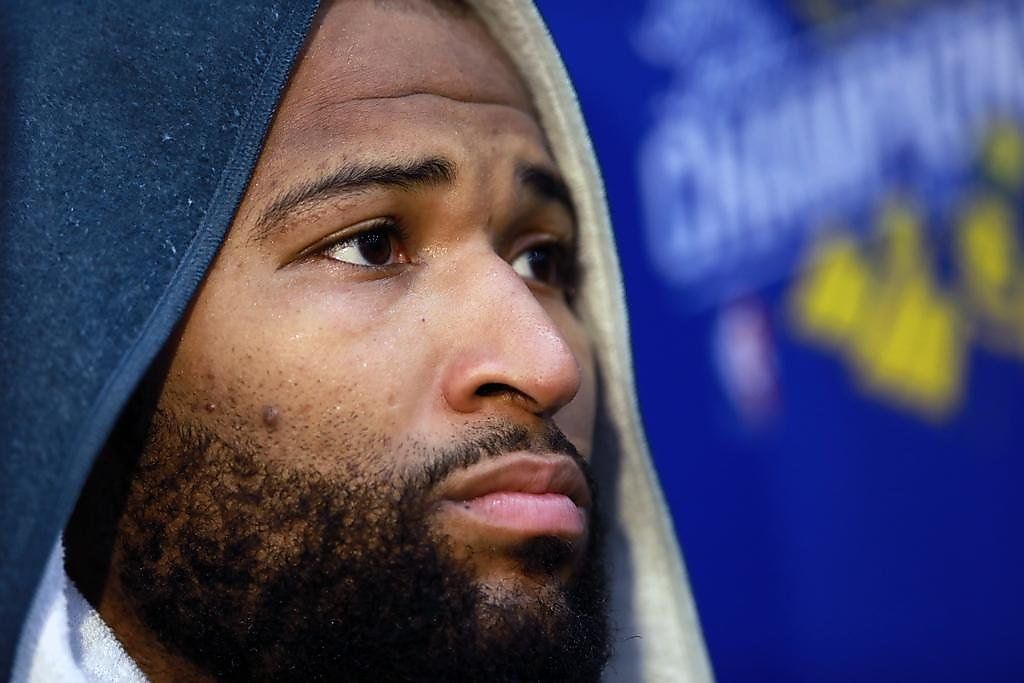 A very positive news has surfaced for Warriors fans as starting center DeMarcus Cousins has practiced with the team last Thursday, marking the first time he participated in a full practice since sustaining a torn left quad injury. Logan Murdock of NBC Sports reported this interesting development, including a statement from Cousins himself.

“I feel good. A lot better than I was. I’m able to get up and down the court more. I’m able to play a little competition basketball."

Since returning to the court after recovering from an Achilles injury he suffered while still playing for the New Orleans Pelicans last year, Cousins has shown tremendous progress with his all-around game and has developed a unique chemistry with the Warriors’ bevy of superstars. The 28-year old big man posted averages of 16.3 points, 8.2 rebounds and 3.6 assists in the regular season. But his chance to help the defending champs this playoffs was hampered when he sustained a non-contact injury during Game 2 of their first-round match-up against the Los Angeles Clippers. Cousins has not played since then.

While non-contact injuries often take a longer recovery period, the Warriors camp surprised the league by announcing that Cousins could return if the team goes on a deep postseason run. Even Cousins, who thought that he could not play for the rest of the playoffs, was surprised by the team’s medical team assessment.

“Initially, I thought it was worse than what it was. There was obviously a panic, but once the doctors came out and I realized what it was, I gathered myself from a  couple  of days of frustration, anger, sadness and all of the above. I told myself to get back to work and do it all over again. That’s what I did, and that’s what I’ll continue to do.”

Of course, this is not something new for the four-time All-Star as he has waited a very long time to finally make a difference on the basketball court. Having Cousins back in the active roster would definitely give a boost to the banged-up Warriors, who have also announced that Kevin Durant will not play for the first two games of the Finals series against the Toronto Raptors, and maybe longer than that.

While Cousins’ case has been more optimistic, the recovery of Kevin Durant from a strained right calf is taking longer than expected. Here’s the Warriors’ official statement on Durant’s progress, per the team’s official website.

“Durant, who has not yet been cleared to begin on-court activities, continues to make good progress with his rehabilitation. At this point, it is unlikely that he will play at  the beginning of the 2019 NBA Finals, but it’s hopeful that he could return at some point during the series.”

Similar to how Cousins torn his quad, Durant also incurred a non-contact injury that initially looked like a devastating Achilles tear. But KD was fortunate enough to get away from a major setback, and was only diagnosed with a strained right calf.

It’s really painful for Durant to be sidelined as he was in scoring tear this postseason. He was norming stellar numbers of 34.2 points, 5.2 rebounds, and 4.9 assists, including an excellent 42% clip from beyond the arc. Durant established himself as this playoffs’ best performer, but the calf injury came in the least opportune time.

Still, the Warriors have been successful despite the KD injury, beating James Harden and the Houston Rockets in the last two games of the series and besting out Damian Lillard and the Portland Trail Blazers in the Western Conference Finals. Some pundits believe that the Warriors play a smoother offense without Durant, but Stephen Curry immediately put a stop on that nonsense, per Ky Carlin of the Warriors Wire.

“Nobody can be happy when people are playing well, that’s the part to me that’s the most surprising. If KD is playing well it’s all ‘oh they’re playing a different style and it’s not as fun to watch’ or it’s he’s out and we’re winning games and it’s ‘are we better or more fun’ or whatever the question is. We hear it all the time. We’re a great team, because everybody who puts on a uniform goes out and competes at a high level. There’s a little bit of sacrifice, but at the end of the day, it’s all about winning.”

With the Raptors holding the home court advantage in this series, Toronto has a golden chance to turn back the Warriors in Games 1 and 2. If that happens, the series will be longer, setting the stage for a potential KD return this postseason. The Warriors are still more unbeatable when Durant is healthy, nobody should dispute that fact.

Andre Iguodala, who did not play during the Warriors’ series-clincher with the Blazers due to a left calf injury, reportedly did not participate during the team’s practice according to Mark Medina of The Mercury News. Also heating up around social media platforms is Iggy’s comments on his injury, hinting that he could retire from the game soon.

“Just a lot of minutes and overuse. I’m old. It just flared up real quick, but we have a good training staff. When you’ve been playing for five long seasons, it’s bound to come up. … My career is almost over, anyway. So I don’t really care.”

The 35-year old defensive ace has been instrumental for the defending champs this postseason, putting up decent numbers of 10.1 points, 4.3 rebounds, 3.9 assists and 1.2 steals per game, while playing his usual role of defending the opponents’ best defender. Not really known for his perimeter shooting, Iguodala is also torching opponents with an outstanding 37% clip from three-point territory.

Just like what he did best against the Blazers when he stripped the ball off Lillard in the closing possession of the Warriors’ Game 2 victory, the Warriors will need more of Iggy to defend Raptors superstar Kawhi Leonard.

Another piece of good news for the rejoicing Toronto basketball fans is that there’s a growing optimism around the team that defensive forward OG Anunoby could return and play against the Warriors in the NBA Finals. Ryan Wolstat of the Toronto Sun has the inside scoop on this exciting development.

“Per sources, the Raptors are quietly optimistic that they’ll get OG Anunoby back at some point vs. Warriors in the NBA Finals. They don’t know for sure, but spacing of  games should help. Also long breaks between most games helps Kawhi quite a bit.”

Anunoby has not played a game for the Raptors since April 12 due to an appendectomy procedure. Josh Lewenberg of TSN also saw the young forward working out pre-game before Game 6 started, marking the first time that Anunoby has publicly done a light workout. OG could be an interesting piece in the puzzle for the Raptors as he has the excellent ability to defend positions 1 to 5, a needed skill as Toronto will definitely employ a lot of defensive switches to defend the Warriors gunners.