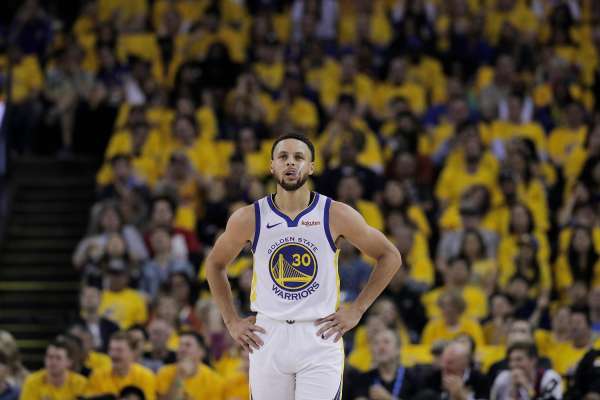 There were immediate clouds of concern after Curry sustained another non-contact ankle injury during a game against the New Orleans Pelicans a couple of nights ago, but it appears that the two-time MVP is good to go for the Warriors’ first-round match-up with the Los Angeles Clippers. Logan Murdock of NBC Sports reported about this exciting development for the Bay Area fans.

“When asked his ankle, Stephen Curry paused and put two thumbs up without saying a word. He’s a go for Game 1.”

Recurring ankle injuries have been the ghosts of Curry’s health throughout his career, a round of setbacks that hampered his progress in the early part of his NBA stint. In three appearances against the Clippers this season, Steph has averaged 32.3 points per game and will continue to be the biggest thorn for the Clippers in their playoff series.

It’s also a very positive sign that the Warriors are entering the playoffs with no major injuries on their roster. It should be expected that the defending champs will try to close out the Clippers as soon as possible, with an eye towards resting their stars before the second round of the playoffs begin.

The Celtics will be without defensive ace Marcus Smart when they welcome the Indiana Pacers to the TD Garden for the opening round of the 2019 NBA playoffs. Smart sustained a torn oblique injury during a recent game against the Orlando Magic, causing him to miss four to six weeks. He is expected to be available after the first two rounds of the postseason, should the Celtics figure everything out and make it to the East Conference Finals.

“According to reports, Smart has a partial avulsion of the oblique muscles which means the muscles have partially torn off the pelvic bone.This injury presents an especially difficult situation for basketball players who are constantly twisting and using their oblique muscles for agility.”

Luckily for the Celtics, the Pacers are also without injured superstar Victor Oladipo, cancelling out Smart’s absence. Brian Scalabrine, former Celtic and now analyst for NBC Sports Boston, emphasized on this belief.

“Probably not the first round. It will affect the game, it will affect the play, it will  affect their spirit, but I can’t see it actually affecting wins. If Victor Oladipo was playing we would have a real conversation. The guy is out. Indiana, they play hard. It goes really far in the regular season, but as far as in the playoffs you have to do  more than play hard because everyone is playing hard. Everyone is prepared.  Everyone is well coached.”

But Scalabrine was also quick to reiterate that a Smart-less Celtics will be more vulnerable against Giannis Antetokounmpo and the league-leading Milwaukee Bucks.

"I don’t think it will affects wins and losses this round. If you want to have this   conversation in two weeks before the Bucks, it will be a different conversation.”

Should Boston put away Indiana in the first round, and the Bucks take care of their assignment against the Detroit Pistons, the two powerhouse squads will meet in the East semi-finals. Milwaukee owns the regular season series against Boston, 2-1.

There’s still no sure answer as to whether All-Star forward Blake Griffin will play in Game 1 of the Pistons’ match-up against the Bucks this Sunday night. Griffin, who is still recovering from a sore left knee injury, did not play during Detroit’s playoff-clinching win over the New York Knicks in their last game of the regular season. Pistons head coach Dwane Casey told the media that his star forward is listed as day-to-day and remains questionable for Game 1, per Vince Ellis of the Detroit Free Press.

It’s an unfortunate setback for Griffin, who is arguably having the best season of his nine-year stay in the league. The former Slam Dunk Champ is posting stellar all-around numbers of 24.5 points, 7.5 rebounds and 5.4 assists per game this year, while also making his sixth trip to the All-Star game.

Still, Pistons sophomore guard Luke Kennard says that the team will continue fighting the odds against Milwaukee, via the team’s official page in NBA.com.

“Hopefully, he’s all good. Get some rest the next couple of days, but whoever is with  us we’re going to go out and compete. We have a good team. I really believe that. Hopefully, we can put together some really good basketball in the next week or so.”

With a strong possibility that they will be playing without the services of Griffin, the Pistons should get another excellent showing from their double-double machine, Andre Drummond, while pushing Kennard and point guard Reggie Jackson to carry the scoring mantle for them.

The Sixers will start their championship bid against D’Angelo Russell and the uprising Brooklyn Nets, but a key cog in their success remains questionable for Game 1 on Saturday. Embiid is still recuperating from a minor sore knee injury and has sat out five of the team’s previous seven games, including their last two assignments to finish the regular season.

The Cameroonian All-Star center says that the decision to play on Saturday will be based on his body “respond based on the pain level”, per Philly.com’s Marc Narducci.

“It is my decision because I am the one feeling the pain and I know my body. They  [the medical staff] are going to do whatever they can as far as getting me ready, but if my body doesn’t respond based on the pain level, there is really nothing you can do.”

Embiid was seen putting up shots during Friday’s team practice, but it appears that he didn’t do anything more than that. Joel played limited minutes during their third-to-the-last game against the Chicago Bulls, where he tallied 20 points, 10 rebounds, 5 assists and 3 blocks.

While the absence of Embiid will definitely put the Sixers in a disadvantage, it could also be a golden opportunity for Jimmy Butler and Tobias Harris to get their shots and rhythm going this early in the postseason.

The 2nd-seeded Raptors will be without a key rotational piece as sophomore forward OG Anunoby has sustained an acute appendicitis, forcing him to go through emergency appendectomy that will cost him some games in the upcoming playoffs. Here’s the official statement from the Raps’ official page in NBA.com.

“The Toronto Raptors announced Friday that forward OG Anunoby had an   emergency appendectomy after being diagnosed with acute appendicitis. The successful surgery was performed in Toronto on Thursday evening at Mount Sinai Hospital. There is no timeline for Anunoby’s return and his condition will be  updated as appropriate.”

After a promising rookie season, Anunoby has appeared to hit the sophomore slump as combo forward Pascal Siakam has overtaken him in the lineup and in playing minutes. Still, Toronto head coach Nick Nurse says that OG has been better in the previous contests, and it’s unfortunate for him to have this setback at the most important time of the NBA calendar, via Kevin Arnovitz of the ESPN.

"My first thought is what a bad break for him, just bizarre timing, and it doesn't even happen on the basketball court. He's had a difficult year, but in the past 10-12 days, I feel like he was in a really good space."

Anunoby is averaging 7.0 points, 2.9 rebounds and 0.7 steals per game this season. His absence, combined with the injured Patrick McCaw, will make the Raps’ perimeter depth thinner. Expect young small forward Norman Powell and veteran shooting guard Danny Green to have increased playing minutes against the Nets.