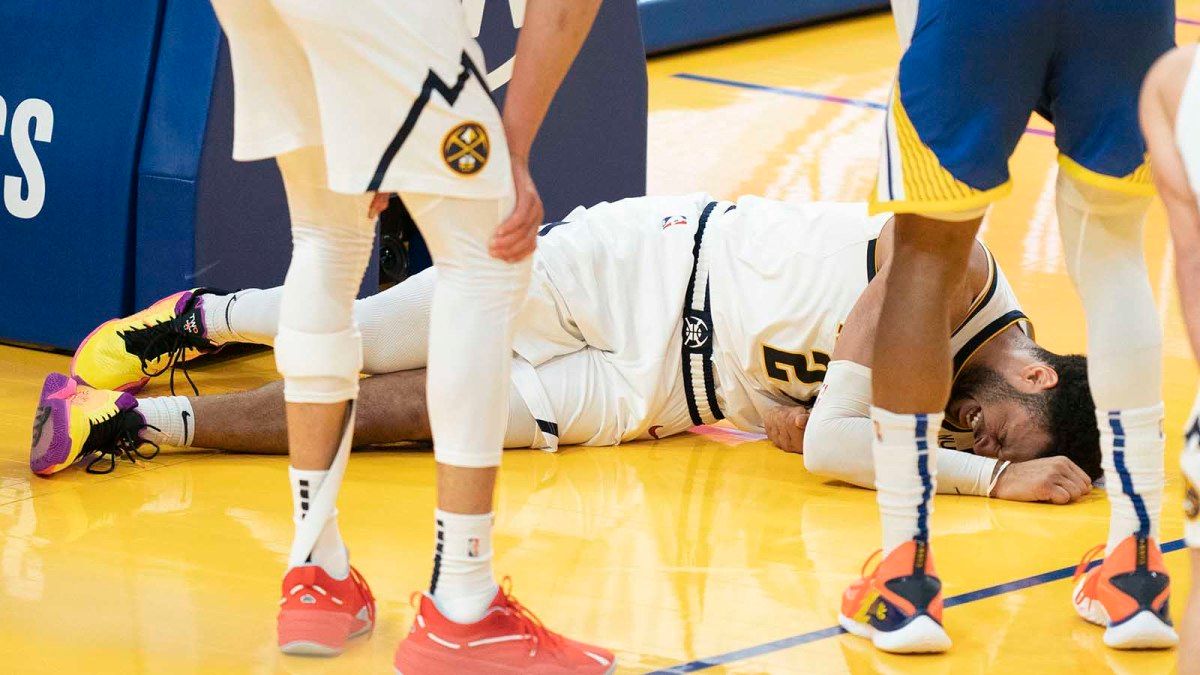 Denver Nuggets star point guard Jamal Murray had his fantastic 2020-21 NBA campaign cut short due to a Torn ACL injury he unfortunately suffered during the Nuggets’ recent 116-107 loss to Stephen Curry and the Golden State Warriors. Murray logged in 33 minutes in that game, pouring in an all-around stat line of 17 points, 4 rebounds, 4 assists, 3 steals and 1 block.

The injury happened when Murray went up for a lay-up down the lane, a normal play that we usually see from guards and wing players who like penetrating the defense for creative finishes around the rim. But Murray would immediately feel the pain in his knee as soon as he made a jump for the lay-up. The Nuggets star point guard never finished the play, and landed on the floor in an obvious heap of pain.

As soon as he clutched his knee, everyone knew what just happened. A knee injury coming from a non-contact situation almost always results to a Torn ACL injury, which takes a significant amount of time, even almost a year, to completely recover from. Murray did not need a wheelchair to take himself out of the court, but he greatly limped as he walked off.

It is indeed an unfortunate turn of events for the Nuggets, who have championship aspirations this year after losing to LeBron James and the Los Angeles Lakers in the Western Conference Finals last season. With superstar big man Nikola Jokic putting up an MVP-caliber performance this season, along with their recent acquisition of all-around combo forward Aaron Gordon, there is just no doubt that this Nuggets squad has what it takes to make a lot of noise in the more important games of the playoffs.

Sam Amick of The Athletic described Murray’s season-ending injury as “gut-wrenching.” Amick pointed out to the fact that Murray was recently playing out of his mind, and that his absence could result into a drastic downfall for the Nuggets in terms of its place in the hierarchy of the contenders in the Western Conference.

You don’t root for players in this business, but you do root for people. So when we heard that the worst fears were realized, that Murray was done for this season and the Nuggets’ championship chances had unofficially vanished as a result, it had everything to do with the strength and scope of the reaction. To put it bluntly, and not so eloquently, this sucks — for Murray, most of all.

After all the discussion about his struggles early this season, the chatter about the disappearance of “Bubble Jamal” that was known to get under his skin, he was playing at an elite level again at the perfect time. To wit: Since Feb. 12, Murray had  averaged 23.8 points while shooting 50.3 percent overall, 45.3 percent from 3-point range (on 7.3 attempts per game) and 94 percent from the line while averaging 5.2 assists and 4.2 rebounds to boot while the Nuggets went 18-8 in that span. And    now, with Denver (34-20) fourth in the West and sure to fall, the already-heavy burden will fall on MVP front-runner Nikola Jokic to lead the way as the Nuggets try to make the best of this brutal situation.

Murray, who is on his fifth year with the Nuggets, was putting up career-high averages of 21.2 points, 4.8 assists and 1.3 steals per game, along with his 4.0 rebounds. He is also producing career-best shooting percentages of a 47% overall clip from the field, including a stellar 40% clip from the three-point line.

So, this is really an unfortunate setback for the Nuggets, especially with Murray playing this good at this point of the season. Even with the acquisition of Gordon and the vast improvement of young budding forward Michael Porter Jr., Murray is still the second-best player in this Nuggets team. On top of that, the memorable scoring and shot-creating performances he put up in last year’s playoffs are indicators of just how much he can turn it up a notch when the stakes are higher in the NBA postseason.

But even if a lot of people have already written them off in terms of their chances of nabbing the championship this year, this Nuggets squad will fight and claw their way into contention. They are currently sporting an excellent record of 35 wins against 20 defeats, which is good for the 4th seed in the stacked Western Conference standings.

They also recently defeated Jimmy Butler and the Miami Heat in their first game without Murray’s services at the backcourt. Jokic led the way by compiling another triple-double stat line of 17 points, 11 assists and 10 rebounds as the Nuggets steamrolled on their way to a lopsided 123-106 victory over the reigning Eastern Conference champions. As per Alex Labidou of Nuggets.com, team head Michael Malone pointed out to the fact that he saw his players play with joy, something that is very hard to do, especially after news broke out that Murray will be sitting out the rest of the season.

The Nuggets ran an incredibly efficient offense Wednesday night, shooting 47.2 percent from three while also dishing out 33 assists to just 10 turnovers. More impressively, Denver’s transition defense only allowed seven points off those giveaways. A strong bounce-back for a team that had struggled in that area during  its two-game losing streak.

"I liked how we played tonight," Nuggets head coach Michael Malone said. "I just  felt like there was joy in how we played. We just had guys who looked like they were having fun and that was one of my challenges to our guys today, even before Jamal had gone down with that injury, I just felt like there was not a lot of joy in  Mudville, and you can't play like that; you can't coach like that and tonight, I felt like we got back to playing our brand of basketball, unselfish, playing for each other."

With Murray sitting out, the burden will now fall on the able shoulders of Jokic. The Serbian big man is currently putting up a magnificent season in which he is norming 26.0 points, 10.9 rebounds, 8.8 assists, 1.5 steals and 0.7 blocks per contest, including a brilliant 56% overall clip from the field, and a tremendous 41% clip from beyond the arc.

But aside from Jokic’s all-around brilliance, there is also the fact that Aaron Gordon has to step up in his first go-around as part of this Nuggets organization. The team made a move to acquire him by pulling off a trade deal with the Orlando Magic right before the trade deadline last March. With Gordon on board, the Nuggets are getting an athletic combo forward who can inflict damage on both ends of the floor.

Gordon, who is on his seventh year in the league, is putting up decent averages of 11.8 points, 4,8 rebounds, 2.6 assists, 0.8 steals and 0.7 blocks in the 10 games that he played for the Nuggets so far. His field goal shooting percentage has been superb at 57%, but his lowly 30% clip from the three-point line is a bit worrisome. Still, Gordon’s Swiss Knife services will be drastically needed by this Nuggets, especially with their star scorer sidelined for the rest of the 2020-21 NBA campaign.

As for the Nuggets, there is no doubt that their work is cut out in front of them. After their recent inspiring win against the Heat, they will then face John Wall and the Houston Rockets on Friday, followed by a home game against Ja Morant and the Memphis Grizzlies. The Nuggets will then embark on a tough two-game road trip that will feature difficult match-ups against All-Star point guard Damian Lillard and the Portland Trail Blazers, followed by a game against two-time Most Valuable Player Stephen Curry and the Golden State Warriors.