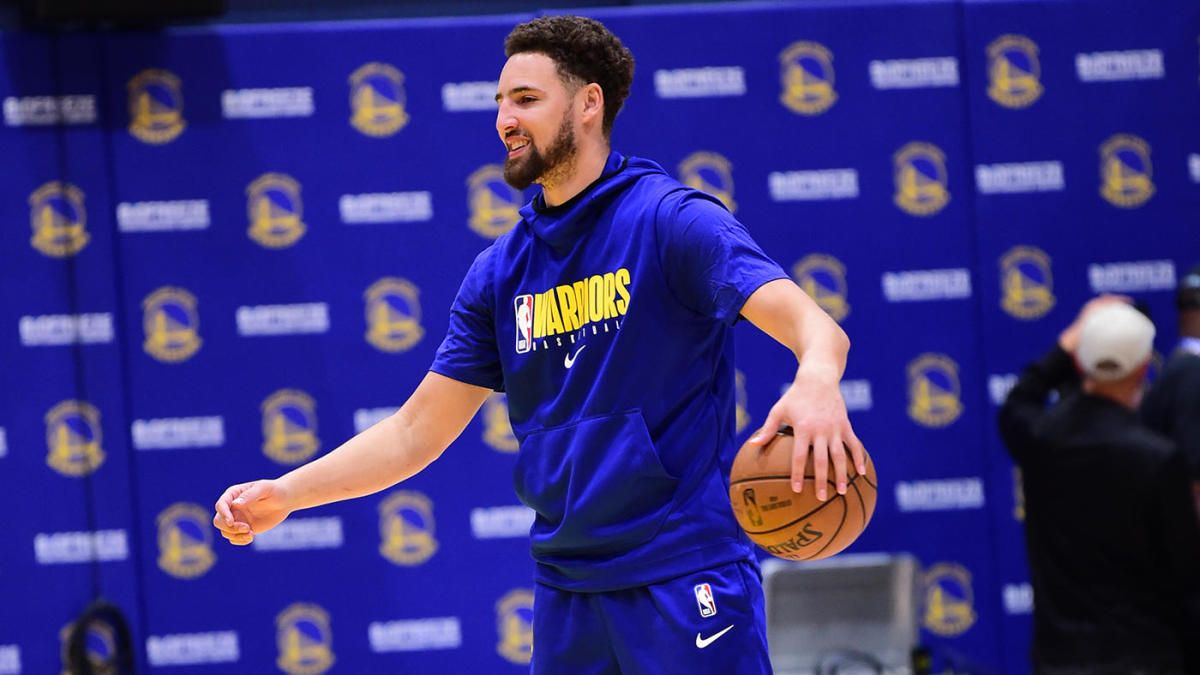 It has been quite a long while, but Golden State Warriors star shooting guard Klay Thompson has finally talked to the media about that unfortunate Torn ACL injury he sustained during the offseason.

Thompson, a five-time All-Star, was already coming off an injury-riddled season in 2020 when he sat out the full year to recover from the major Achilles injury he suffered during the Warriors’ 2019 NBA Finals series match-up against Kawhi Leonard and the Toronto Raptors. Klay was poised for a much-awaited return to the Warriors’ active line-up this season, but he unfortunately suffered a Torn ACL injury during a pick-up game in the offseason.

In a recent media session, Klay finally revealed that he sustained that ACL injury when he made a two-dribble pull-up jumper that he usually does each and every day. Thompson also revealed that he has finally taken off his walking boot, but he still sees lots of minutes restriction when he returns to the Warriors’ active line-up next season. (h/t Anthony Slater of The Athletic)

“I got my boot off,” Thompson said. “I’m walking. I’m doing calf raises. I’m in the HydroWorx. I’m not running yet, but I’m running on the treadmill underwater. That’s good for my psyche. From here, it’s only getting more intense and active.

I’ll be honest,” Thompson said. “I don’t expect to come back balls to the wall, 38 minutes a night, guarding the best player, running around 100 screens. I’m going to get to that point. I guarantee that. But I’ve talked to Rick Celebrini about it a lot. It might be 20 minutes to start the season. Eighteen minutes. Restriction. We’ll see where I’m at. This is usually a 12-month process with the Achilles and that’ll take me to mid-November.”

Thompson, who has spent his whole career with the Warriors, has compiled career averages of 19.5 points, 3.5 rebounds, 2.3 assists and 0.9 steals, while tallying a stellar 41% clip from the three-point line. There is no doubt that Klay has established himself as one of the best long range gunners that the NBA has seen, and his return to the Warriors roster will definitely bolster their chances of competing again for the championship next season.

The 6-foot-7 combo wing believes that Golden State will seriously compete for the championship again next year. After all, they still have their championship core intact, with the exception of Andre Iguodala who is now playing for the Miami Heat. Stephen Curry should be a Top 10 contender for the Most Valuable Player award if the Warriors book a coveted ticket to the playoffs, while Draymond Green is racking up one triple-double stat line after the other.

With prized rookie James Wiseman waiting around the corner, and Andrew Wiggins finally embracing a defensive-oriented role, the Warriors should be a scary team to face next season. Thompson said that the team is actually better than what their record of 20 wins against 19 defeats look right now. The Warriors are currently sitting on the 9th spot in the stacked Western Conference, just a full game below Luka Doncic and the 8th-seeded Dallas Mavericks.

Well, I anticipate us being right back in contention for a championship again. This year has been tough, obviously, with the pandemic and so many new players on the team. I love our group though. I think we have a great group. These guys come to work every day. They’re eager to be great players and we still have so much basketball left to play.

Although our record doesn’t reflect how good I think we are, I think we will still make a run here and finish with a solid record and make a push in the playoffs. I love the guys on our team, and I love James (Wiseman)’s ability. I think James is going to be a perennial All-Star one day. He doesn’t know how good he is yet. I mean, who does when they’re 19 years old, but he just has physical abilities and talent that you just can’t teach. James is going to hopefully extend this dynastic run for years to come, because he has that much ability in him.

One of the people who hurt the most right after news of the Klay Thompson injury broke out was Stephen Curry. Dubbed as the “Splash Brothers,” Curry and Thompson have successfully established himself as a deadly backcourt duo not just in the Western Conference, but in the whole league for years now.

This season, Curry is putting up excellent numbers of 29.3 points, 5.4 rebounds, 6.2 assists and 1.3 steals per contest, including a tremendous 40% clip from beyond the arc. That very efficient three-point shooting percentage is really an astounding work considering that with Thompson sitting out, the opposing teams’ defenders heavily gravitate towards Curry so as not to allow him to heat up.

As per Alex Didion of NBC Sports Bay Area, Steph’s father and former NBA player Dell Curry revealed how much devastated the Warriors guard was when he learned about Thompson’s injury. Dell also emphasized about the growing uncertainty of the team, and the heavy task that Steph was expected to fulfill with his backcourt partner sitting out the whole season.

“We could tell something was not right. He stopped golfing for a while  and he told us (to) play through. Steph took it hard, but we all took it hard. We’re all Warriors fans. We all felt his pain that day.

The uncertainty of what the team was going to be like was a big concern, his role, if it could be any bigger, was going to have to be bigger. You hate it when you lose a player like Klay, but I think that made him aware that he was really going to have to be ready when the season starts. Teams are throwing everything at him. Even last night (against the Heat), he’s seeing all 10 eyes of the opponent every single night.”

On top of the injury he sustained in the offseason, Klay also took the time to emphasize about all the unfortunate things that happened in 2020. With the COVID-19 pandemic happening that same year, along with the tragic deaths of Gigi and Kobe Bryant, Klay said that it was definitely a difficult year for him.

That same year, he was also recovering from the Achilles injury he sustained during the 2019 NBA Finals. He fully recovered from that setback heading into the offseason, but the ACL injury happened right when he was on the cusp of participating in the Warriors’ training camp.

Klay admitted that 2020 was the worst year of his life, and that it was great to be back with his teammates this season.

“It was just lonely. I think everybody was going through it. You took for granted your daily routines, whether it was getting breakfast in the morning or going to a movie at night. I had gym access down in the OC  (Orange County), which was real nice at Stan’s Headquarters. But the pandemic — I mean, 2020 was just such a year of reckoning, not only for the pandemic but for the social justice. We lost so many innocent people to violence, it was awful, Kobe going out and GiGi (Bryant), and on top of  that in the fall I tear my Achilles.

It was just probably the worst year of my life, guys. I lost my           grandmother. It feels good to be back here. I feel love when I’m back in the Warriors facility. My roots are here and the pandemic, it was not easy on anybody. Everyone had their own little trials and tribulations through 2020, but that was it for me was losing my Grandma Mary, tearing my Achilles and I mean, I still think about Kobe every single day. There’s not a day I don’t think about him and not being able to have that last convo with him, and just it was a tough year, guys, not only for me but I’m sure for all of you. I’m looking forward to the future, that’s for sure.”

The streaking Warriors will be facing LeBron James and the defending champs Los Angeles Lakers in their next assignment.