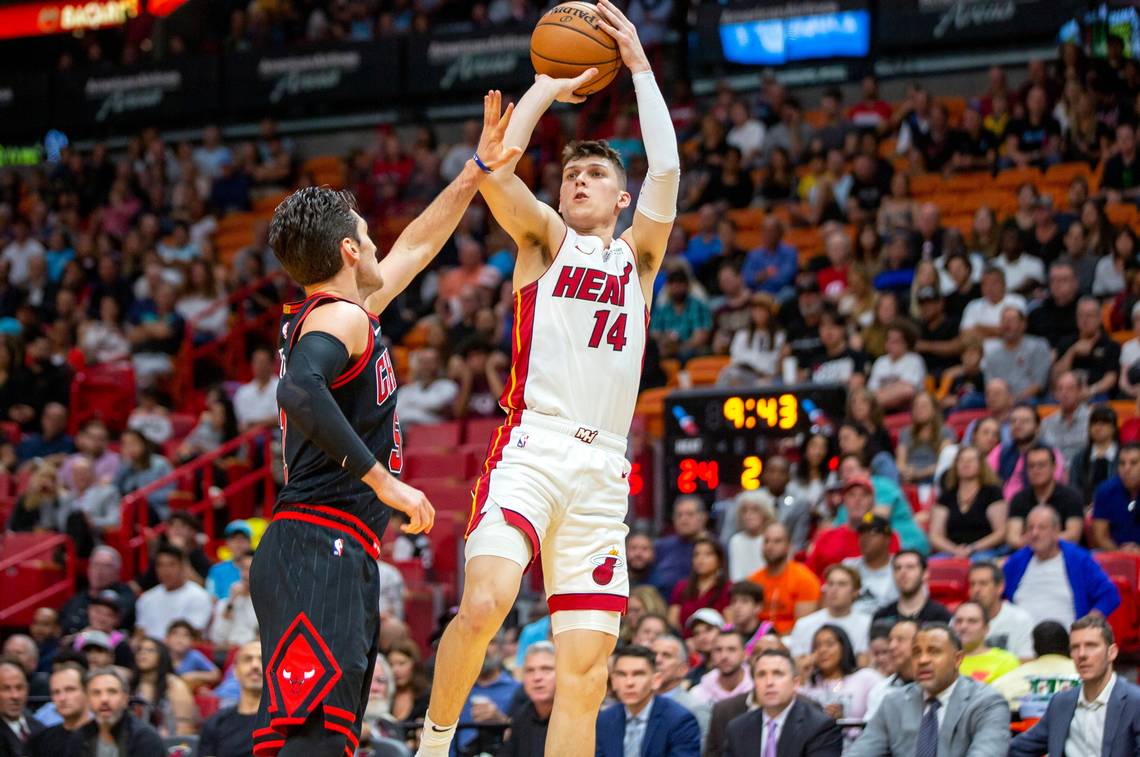 Heat rookie sensation Tyler Herro has been making a lot of splash in his first year in the league. A confident gunner with a sweet shooting stroke from the three-point line, Herro has earned a consistent role in head coach Erik Spoelstra’s rotation. However, his rookie year has been hit by injuries forcing him to miss 18 games this season. His latest setback was a foot injury which sidelined him for 15 straight games.

When he sustained that injury early in the month of February, there were reports saying that Herro himself feared that he could not play until the postseason. Anthony Chiang of the Miami Herald tweeted out this report.

“Tyler Herro said at first the thought was he would be out until the playoffs. But doctor appointment earlier this week went well and he’s hoping to get his boot off next week. He said it’s a foot injury.”

But the great thing about this is that Herro has finally returned to the court. After making it to his first full practice with the team since his injury last February 3, Herro has followed it up with an appearance against the Charlotte Hornets last March 11. He logged in seven minutes of play, made one shot and had a rebound and a steal. Although it was not the explosive return that Heat fans wanted to see, it was still a welcome sight for the 4th-ranked squad in the Eastern Conference.

The good problem that Spoelstra and his coaching staff will face is how to re-integrate Herro back to the rotation. Before the February trade deadline, the team acquired veteran perimeter players in Andre Iguodala and Jae Crowder. Both forwards have proved to be quality pieces for the Heat’s campaign, especially with their experience and defensive instincts.

But it’s not just Iguodala and Crowder who will crowd the minutes of the team’s perimeter players. Veteran star point guard Goran Dragic has accepted a sixth man role for the team, and has excelled in it. Dragic’s scoring and playmaking should make his minutes untouchable. But as per Ira Winderman of the South Florida Sun Sentinel, the veteran guard doesn’t see Herro’s return as a problem for the rotation.

“It means a lot. We know what he can do. He can score. He’s a great shooter, and he gives us that different depth.

We understand everybody needs to make some sacrifices this season. We know we're going to need every player on this roster. We'll see how Spo is going to sub us in and out with the rotation."

Indeed, Herro’s on-court production is an excellent contribution to Miami’s successful campaign this season. The rookie shooting guard is putting up stellar numbers of 12.9 points, 4.0 rebounds and 1.9 assists, including a tremendous 39% clip from beyond the arc. More than those numbers, Herro has been exerting outstanding efforts on the defensive end and has had his own share of heroic moments in crucial stretches of games.

Most importantly, Herro has been loved by his teammates. All-Star big man Bam Adebayo emphasized that the absence of the sweet-shooting rook has the team missing a “big component” in their game plan. The team’s main star, Jimmy Butler, has also created a close relationship with the young gunner. In an appearance on the J.J. Redick Podcast, Butler described how he has grown fond of Herro’s on and off-court personality.

“He is a lot like you in the sense of you’re like a black, white guy to me — like how you go about [stuff]. … Tyler is the exact same way: He can’t swim, which is stereotypical.  I was like, ‘Man,’ when I first met him. Even his mannerisms, the way he talks.

That’s why I like him; he doesn’t care. He is him no matter if he is in Miami,  Milwaukee. Anywhere in the world, Tyler is going to be Tyler. I knew that he was going to be good because, the way that he works, he works as though he has been in the league for so many years. With that being said, Coach Pat and Coach Spo were nailing that in his head. We don’t care if you’re the 13th pick, we don’t care that you  were one and done. You’re going to work and earn everything here and he has done    that.”

The pause on the NBA season should also give Herro more time to condition his body and have his foot fully-healed. The Heat is sporting a 41-24 record, and could still make a run for the third spot in the East that is currently owned by the Boston Celtics.

Former MVP point guard Derrick Rose has sustained an ankle injury that should take him a few weeks to recover from. Chris Haynes of Yahoo Sports reported that although the MRI results turned out to be negative, the 31-year old vet will still need some time to have his right ankle fully healthy.

The Pistons will be cautious in deciding when to let Rose play, but the 2010-11 league MVP is expected to make a full recovery and will be reassessed in a few weeks, sources said.”

Despite being relegated to the sixth man role this season, Rose has been the undisputed leader of this Pistons squad. He is averaging 18.1 points, 2.4 rebounds and 5.6 assists, and has been the team’s go-to-guy in the clutch. There were some expectations that the Pistons would also move him out after trading long-tenured star center Andre Drummond and buying out the contracts of Reggie Jackson and Markieff Morris. However, the team retained Rose and it remains to be seen if they will try to shop him in the offseason.

As for Rose’s ankle injury, Rod Beard of The Detroit News assured Pistons fans that it is not of a major setback.

“There was no update Monday on the severity of Derrick Rose’s ankle injury, but coach Dwane Casey said after Sunday’s loss that he wasn’t in a walking boot and that he was moving around the locker room, which was encouraging news. It’s another blow to a season that had promise during training camp, but has spiraled into the abyss.”

True enough, this has been a lost season for the Pistons. After making it to the playoffs last year, the Pistons were expected to climb a notch up in the East. Drummond and Blake Griffin have more time to build their chemistry on the frontcourt, while the addition of Rose has bolstered the team’s need of a proven operator and scorer in the backcourt. Morris could give them a lift with his 3-and-D arsenal, while the growth of shooting guard Luke Kennard could be something that will get them over the hump.

But the Pistons never gained any traction this season, and the season-ending surgery that Griffin went through ultimately drained their playoff hopes. With their season already heading towards a bottom-half finish, there were reports saying that the Pistons front office was ready to deal Rose in exchange for future lottery picks. Obviously, that plan did not produce anything, even a buy-out scenario that could have provided Rose with an opportunity to sign with a championship contender.

During the night that Rose hurt his ankle, another Pistons point guard went down with a knee injury. Recently-acquired guard Brandon Knight appeared to collide with Sacramento Kings forward Harrison Barnes, hurting his knee in the process. But as per NBA.com, Knight pointed out that it was just a minor injury while also expressing his remorse on losing the contribution of his injured backcourt partner.

One of our best players, a leader for us. He makes so much happen on the court for us, always getting in the paint. His presence on the floor is big time, so it definitely hurt not having him out there.”

With a lowly 20-46 win-loss slate this season, the Pistons have dropped to the 13thspot in the East. They are already eleven games below the last playoff spot in the conference, so their eyes are already set towards re-building the team in the summer.