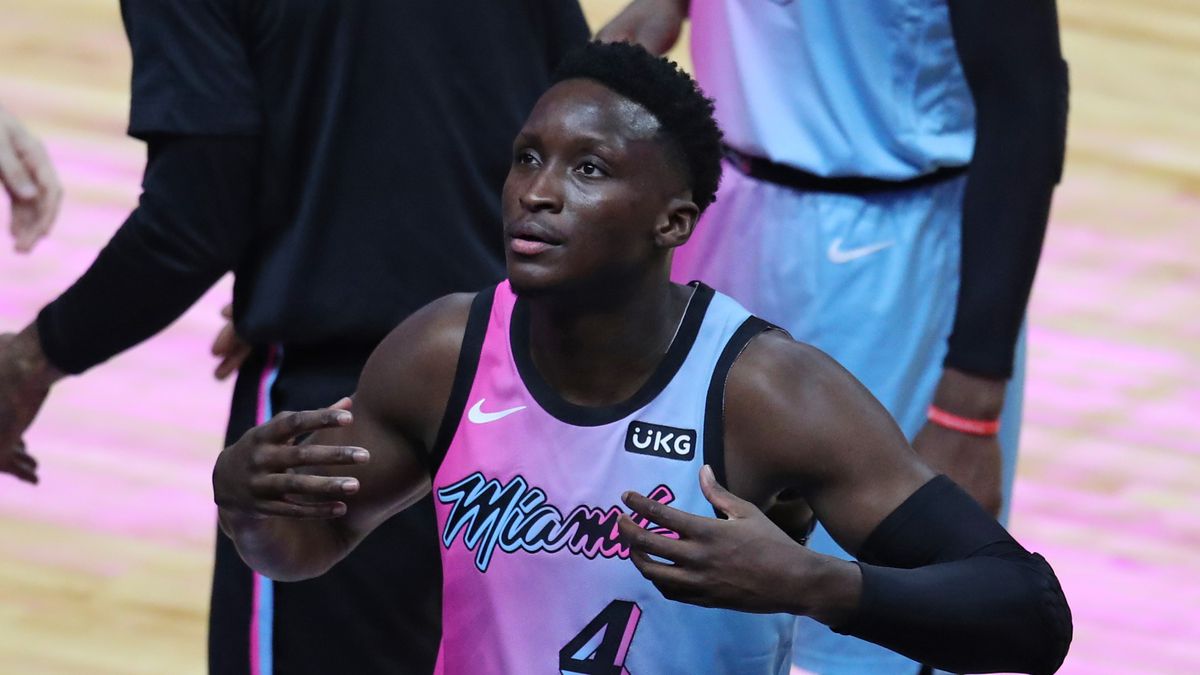 After undergoing a season-ending surgery to fix his right quad tendon, it has become known that Victor Oladipo’s estimated timetable for his return is set on November this year. Oladipo has played only four games for the Miami Heat, his third team in the NBA this season.

It is indeed a roller coaster of a season for the two-time All-Star shooting guard. After spending three seasons with the Indiana Pacers, the team traded him to the Houston Rockets in that powerhouse three-team trade that also involved stars James Harden and Caris LeVert, as well as young up-and-coming big man Jarrett Allen.

But Oladipo only played in 20 games for the Rockets before his name was again rumored to be in the trading block. Sure enough, Oladipo was on the move again as he was shipped to the Heat in a trade deadline day deal. The Heat has always been enamored in the possibility of acquiring Oladipo ever since the 2018-19 NBA season when he made it to his second consecutive All-Star appearance.

As per an article written by Senior NBA Insider Adrian Wojnarowski for the ESPN, orthopedic surgeon Dr. Jonathan Glashow laid out a detailed explanation on why he thinks that the Heat shooting guard could figure in full-contact basketball activities as early as the month of November 2021. Wojnarowski also included the fact that it was Glashow who performed the surgical procedure on Oladipo’s right quad.

Glashow reiterated that the surgery was successful as expected, and that it is progressing really well in terms of the healing of Oladipo’s quad.

Glashow performed the procedure on May 13, and he expressed surprise that Oladipo had even been able to play NBA basketball with the previous state of his tendon. Glashow did not perform the January 2019 procedure on Oladipo.

"I repaired the quad tendon and did it a little differently than [he had] it done before," Glashow told ESPN. "The quad wasn't really hooked up. It was torn, and I reattached it. I was amazed he was playing with what he had. I'm very optimistic that I could clear him in six months, by November. I think he's going to play really well again. [The surgery] went extremely well, and it's healing beautifully. I'm confident he'll play next year."

Oladipo, who just turned 31 years of age earlier this month, is on his eighth year in the league. Oladipo was the second overall pick in the 2013 NBA Draft, and played for the Orlando Magic in the first three years of his career. He became an immediate contributor on that team, evidenced by his all-around stat line of 13.8 points, 4.1 rebounds, 4.1 assists and 1.6 steals per contest during his rookie year with the Magic.

Oladipo would steadily improve his numbers every year, establishing himself as one of the best two-way stars in the league. However, it is also true that Oladipo’s name has been often bounced around in trades. After his third year in Orlando, Oladipo was traded to the Oklahoma City Thunder, where he joined forces with triple-double wonder Russell Westbrook.

But the star shooting guard only stayed one year in Oklahoma City as he joined the Pacers the next season. It was during his first year with the Pacers that Oladipo broke out of his shell. He normed career-highs of 23.1 points, 5.2 rebounds, 4.3 assists, 2.4 steals and 0.8 blocks per game. He led the league in steals that season, and was named as the Most Improved Player of the Year.

In that same season, Oladipo was also able to lead the Pacers to the playoffs. They went toe to toe with LeBron James and the Cleveland Cavaliers before losing in seven games in the first round. In that seven-game series, Oladipo produced a brilliant all-around stat line of 22.7 points, 8.3 rebounds, 6.0 assists and 2.4 steals per game.

In an article written by Halen O’Shaughnessy for The Ringer in 2017, she detailed out why Oladipo did not pan out as a full-blown star while playing alongside another heavy ball-handler in Westbrook. It was surely the case as Oladipo blossomed into an elite two-way star in Indiana, where he immediately assumed the important role of a main star and a primary option scorer.

Oladipo did not just accept the main star role, but he also improved his game in almost all facets.

Here, as second fiddle to Russell Westbrook, Dipo had little choice but to try his hand at spot-up shooting. The former went on to claim a record-high usage rate, while his counterpart left the isolation game behind. In its place were the most catch-and-shoot attempts of Oladipo’s career. He attacked the rim less than ever, released the majority of his shots after  two seconds or less of possession time, and used a greater percentage of his touches for 3-point attempts than Russ did. To the non-shooting shooting guard’s credit, there was improvement. Oladipo ended the season shooting 36 percent from deep and found rhythm with the corner 3s at 43.8 percent altogether. He was OKC’s second-leading scorer.

That mark is deceptive with an offense like the Thunder’s, and it’s more of an indictment on OKC’s lack of non-Westbrook scoring than it is praise for Oladipo. If last season was better than his 2015–16, it was only marginally so, and by the playoffs, his first, the implications of his stalled growth were evident: Not enough time with the ball had short-circuited Oladipo in all areas, even in spots he was talented. When resting Westbrook became unavoidable in the Rockets series, Donovan finally gave his 2-guard the rock. Dipo struggled to command attacks, had less success finishing drives both in the paint and at the rim than he did in the regular season, and, in three of the five games, did not make it to the line even once. He managed just 54 points total in the playoffs, on 24 percent deep shooting.

However, Oladipo’s career would spiral downward after his first two seasons in Indiana. He suffered a major injury during the 2018-19 NBA season, and it became apparent that he has not been as deadly and as effective as he was during his two All-Star seasons.

Now that he is in the Miami Heat camp, it is true that he will be tasked to help Jimmy Butler and Bam Adebayo put this squad at the top of the Eastern Conference. Even though they made it to the NBA Finals last year, it is true that the Heat still lags behind several East teams in terms of talent and roster depth.

With James Harden arriving in Brooklyn, combined with a healthy superstar pair of Kevin Durant and Kyrie Irving, the Nets are currently positioned to win the conference this season. Joel Embiid is turning in a MVP-caliber year for the Philadelphia 76ers, while reigning back-to-back Most Valuable Player Giannis Antetokounmpo is still putting up extraordinary stat lines filled with double-double performances on both the scoring and the rebounding department.

So Oladipo is in a situation where he can help his team, and his team can help him. As per Zach Harperof The Athletic, he says that the winning culture and system in the Heat organization could help bring out the best in Oladipo, and also help him get back on track to returning to his deadly and masterful form as an All-Star.

The Heat constantly tout their program for training and getting guys to top physical condition. They were a body health rehab center of sorts for role players looking for a revival for years. They had some good success  with role players during the past decade too. Their hopes in this buy-low rental of Oladipo (that maybe turns into him re-signing) is that they can have him back to the Oladipo of old once they get to the postseason. Pairing even a decent version of Oladipo with Goran Dragic, Jimmy Butler and Bam Adebayo gives them so much potential if you believe Oladipo can get back to his old explosiveness.

It also means less pressure and emphasis on the second-year exploits of  Tyler Herro, who has struggled immensely since turning his hype train up to 11 during the 2020 NBA playoffs. At worst, they lost a stretch big man and full control over their 2022 first-round pick in exchange for the chance to revive Oladipo. At best, they brought an All-Star-level player on both ends of the floor into the mix. Even if it’s somewhere in the middle, this is a very good move for Miami.

The Heat, who are currently in the thick of their first-round playoff match-up against Giannis Antetokounmpo and the Milwaukee Bucks, will not be able to field in Oladipo for the rest of the postseason. It is definitely a heart-breaking turn of events, especially with how big of a boost Oladipo could have been on both ends of the floor.

In the four games that Oladipo played for the Heat, he was able to produce a decent stat line of 12.0 points, 3.5 rebounds, 3.5 assists and 1.8 steals per game for his new team.