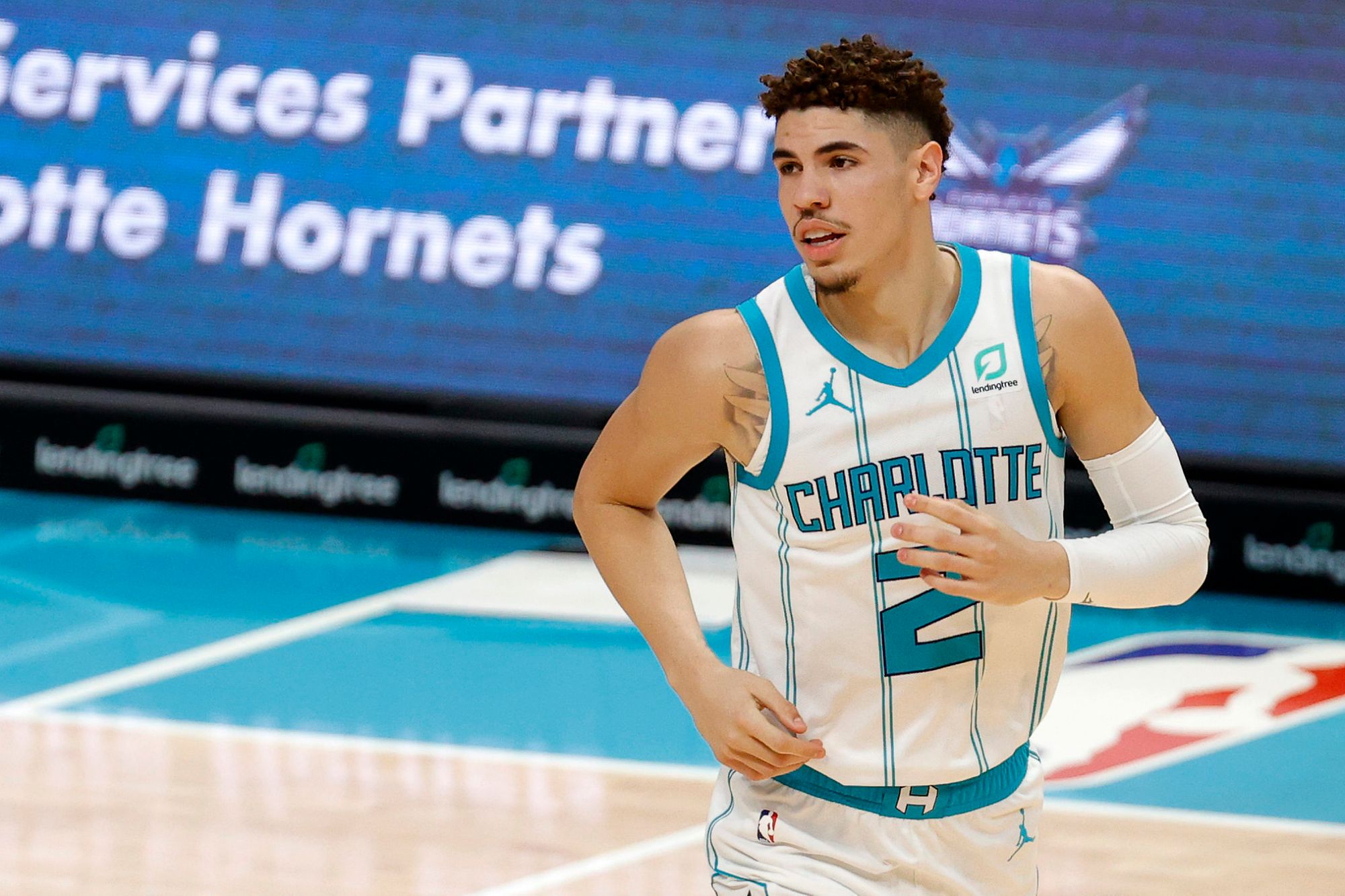 With the Charlotte Hornets entering the last important stretch of the 2020-21 NBA regular season, it is indeed a heavy sigh of relief that their impressive rookie point guard LaMelo Ball has finally returned to the court. Ball has missed the Hornets’ last 21 games, but it is without a doubt that he has not missed a single step in his return to action.

In his first game back against the rebuilding Detroit Pistons, Ball put up an excellent all-around stat line of 11 points, 7 rebounds, 8 assists, 1 steal and 2 blocks. He missed three of his four attempts from beyond the arc and committed a total of five turnovers. But Ball’s versatility and playmaking brilliance were in full display, and it would not be a surprise if he still wins the Rookie of the Year award this season even though he has already missed a significant amount of games this year.

That impressive performance in just his first game back earned his coach’s heap of praises. Hornets head coach James Borrego, who is on his third year with the team, emphasized that Ball is still deserving of the top rookie plum. As per Dave McMenamin of ESPN, Borrego also said that having LaMelo back was a “breath of fresh air.”

"Maybe we should be teaching the Melo underhand flip. He's the only guy I know [who can do that]. Maybe [Manu] Ginobili would have thrown that, as well. I've seen Manu throw some crazy stuff out there. I put Melo in that same Manu category. You never know how someone is going to respond off that [much] time off. If there is a guy that can maybe come back and not miss a beat, it's Melo. He just has that instinct, that feel.  That didn't quite surprise me.

It was a breath of fresh air just to have that jolt back in the gym for us. They love playing with Melo. You could feel it. The first quarter, the second quarter, it just naturally came back to us. LaMelo is deserving of that [award]. I'm glad and I'm thankful that he gets a chance to continue that season in the stretch run. ... So, I'm thrilled for him. But us as an organization, this is a wonderful time for Melo to be center stage of this thing."

Ball, who was picked third overall by the Hornets during the 2020 NBA Draft, is currently putting up an impressive all-around stat line of 15.8 points, 5.9 rebounds, 6.2 assists and 1.6 steals per contest. He is doing all these with a high level of efficiency. Ball is only logging in 28.6 minutes per game, including decent shooting percentages of a 45% overall clip from the field, and a 37% clip from the three-point line.

On top of that, Ball has also showed that he has already overcome his long-range shooting woes, which was the facet of his game that draft scouts and experts pointed to as his weakness. But Ball is showing a high level of confidence in his three-point shooting, and he is averaging 2.0 triples per contest.

Aside from his drastic improvement from long range, it is without a doubt that LaMelo is exceeding expectations, especially in the offensive end of the floor. In just his first year in the league, Ball is already establishing himself as one of the best, most accurate and most creative passers in the NBA. That is truly an exceptional feat, especially considering the fact that there is a lot of excellent point guards right now.

To be honest, this is not surprising at all. Even before he applied for the 2020 NBA Draft, people already knew that Ball is a very confident player. Ball then took his unique talents to Australia where he played for Illawarra Hawks in the NBL. Ball did not just earn his paycheck by playing there, but it is also very obvious that he has learned how to be disciplined and be more calculated with his movements on both ends of the floor.

There is a tremendous aura of brilliance and magic that encapsulates Ball’s unique skill set, and that is present every time he is on the court. As per Eric Koreenof The Athletic, he describes LaMelo as an “exception to the rule.” He detailed out how special of a player Ball is, mentioning the Hornets rookie point guard’s high level of win shares this season.

Ball is special. From the start of the game, you couldn’t take your eyes off him. The Hornets hit 21 3s, including 11 in the first quarter, tying a league record, and Ball was involved in so many of them. He was responsible for putting the Raptors on their heels, pushing the pace even after made Raptors buckets. He had a pair of offensive rebounds that led to Hornets 3-pointers. He caught a ball in the corner, did a spin with impeccable footwork, before nailing a shot. He finished with 23 points, nine rebounds and six assists.

It is important to remember Ball is the exception, not the rule. Ball came into the game with 2.5 win shares on the season. Sacramento’s Tyrese Haliburton was second at 2.2. No other player picked in the 2020 draft is over two. Of the teams succeeding right now, very few are doing so on the strength of rookies. There have been fun contributors around the edges, such as Immanuel Quickley in New York or Desmond Bane and    Xavier Tillman in Memphis, but that’s about it when it comes to     competitive teams. Not all rookie classes are the same — this coming year’s draft is supposed to be better, especially at the top, than last year’s — and rookies are generally not chosen for how they will fit in right away. There is plenty to like from the top of this past draft, from Anthony Edwards and James Wiseman on down.

As for the Hornets as a whole, there is still a lot of work left to do. They are currently sporting a decent record of 31 wins against 33 defeats, which is good for the 8th spot in the Eastern Conference standings. They need to hold on to that spot if they want to enter the play-in tournament after the regular season ends.

Ball and the Hornets cannot afford to be complacent in their next set of games, especially given the fact that the current teams positioned for a potential play-in ticket have almost identical records. Directly behind the Hornets are the 9th-seeded Indiana Pacers, who are sporting a record of 30 wins against 33 defeats. The Washington Wizards are also closing in as they have been on an impressive streak that improved their record to 29 wins against 35 defeats.

But it is also true that the Hornets have been really good this season. Even though they do not have a clear-cut star on their roster, Borrego has done an admirable job of putting all the pieces together and making the best out of them. Dan Devine of The Ringer wrote a column about the Hornets, detailing out how Borrego has utilized his players’ unique skill sets, and how players like Miles Bridges, Malik Monk and P.J. Washington are thriving on their special roles in Charlotte.

There’s more: Monk’s up-and-down ride, Miles Bridges and P.J.    Washington rejecting their tweener labels, Graham’s struggles to author an encore to last season’s rise, and center Cody Zeller’s annual bouts with injury. LaMelo Ball may look like a star now, but a year and a half ago, few knew what to make of a virality-seeking missile on a meandering and circuitous path around the basketball globe, with disappearing defensive interest and a jumper shaky enough to register on the Richter scale. Everywhere you look, there’s a flaw waiting to be flipped into fuel; everywhere you look, there’s a player who might be able to give you more than you’d think, if only you’d look at them with a fresh set of eyes.

Put them all together and a Charlotte club that many projected to rank among the league’s worst before this pandemic-warped season has notched wins over the pre-Harden-trade Nets, the full-strength Bucks, the Heat with Jimmy Butler back, and the Warriors (thanks in part to Draymond Green momentarily taking leave of his senses). On Wednesday, they added Phoenix to the list, scoring a 124-121 road win against the  fourth-seeded, two-All-Star Suns.

After their recent double-digit loss at the hands of Jimmy Butler and the Miami Heat, the Hornets will travel to Detroit to face Jerami Grant and the Pistons. After that game against the Pistons, the Hornets will then go back to Charlotte to host a five-game home stand that will feature games against Nikola Vucevic and the Chicago Bulls, Cole Anthony and the Orlando Magic, Zion Williamson and the New Orleans Pelicans, Nikola Jokic and the Denver Nuggets, and Kawhi Leonard and the Los Angeles Clippers.

After those five tough home games, the Hornets will then go back to the road to face Julius Randle and the New York Knicks, followed by a tough match-up against Russell Westbrook and the Washington Wizards.