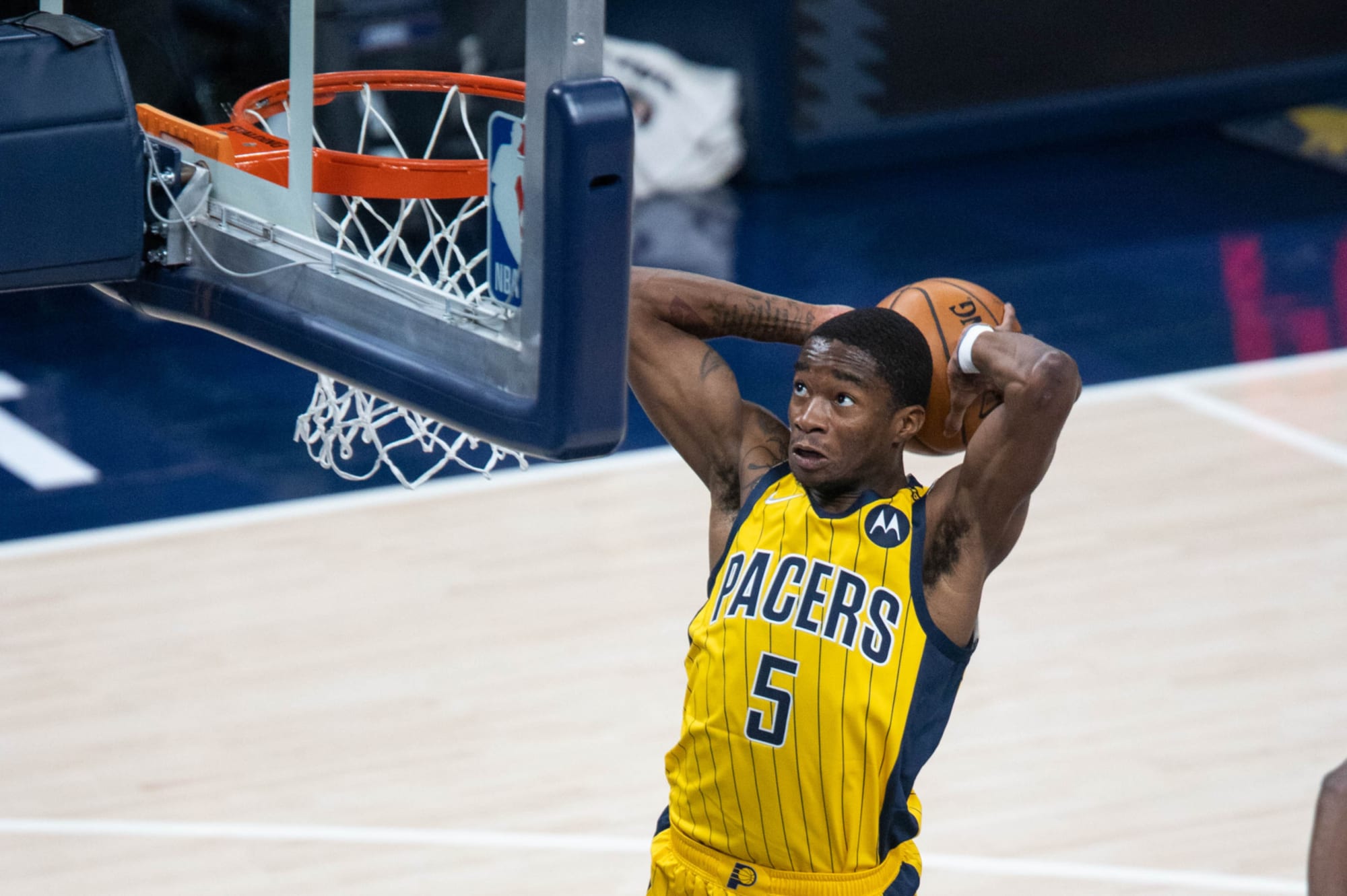 Indiana Pacers’ young talented shooting guard Edmond Sumner has sustained an Achilles injury that will surely keep him out of the upcoming 2021-22 NBA season. As per an update released by the team’s official Twitter account, they said that Sumner suffered the unfortunate torn left Achilles injury during an offseason workout on Thursday.

This is indeed very frustrating for Sumner, who is coming off a decent season in which he put up 7.5 points, 1.8 rebounds, 0.9 assists, and 0.6 steals per contest. While it is true that these are not eye-popping numbers, it is also a fact that he started 24 games for the Pacers last season, an indicator of the level of trust that he has earned within the team and its coaching staff. Sumner is entering his fifth year in the league, so it is very disappointing that the Achilles injury will strip him of more opportunities to improve and hone his overall skill set.

Sumner, who will turn 26 years this age this December, was selected by the New Orleans Pelicans in the second round of the 2017 NBA Draft. The Pelicans then shipped him right away to the Pacers in exchange for cash considerations, then he signed a two-way deal to start off his rookie year. The 6-foot-4 shooting guard struggled to get minutes in his first three years in the league, but he was able to show a little bit of what he can do when he was given a chance last season.

Sumner’s opportunity last season rose when the team traded away their star Victor Oladipo. The Pacers received an excellent scorer in Caris LeVert, but the 6-foot-6 combo wing was injured when he arrived at Indiana so he was not able to play right away. As what Zach Harper of The Athletic points out, the Pacers had to endure a lot of setbacks last season, including injuries to their key players and the difficult transition and adjustment of having a new head coach in Nate Bjorkgren.

Chaos, injuries and a lot of meandering through the Eastern          Conference. After replacing Nate McMillan with Nate Bjorkgren as the coach, the new man on the sidelines quickly fell out of favor with the players and his own coaching staff. As the Pacers fought injuries, health and safety protocols — and some internal chemistry issues — Bjorkgren  was pretty much on the bad side of too many people by the middle of  the season. Players didn’t believe in him. Some assistant coaches and support personnel didn’t rock with him anymore. And the Pacers kept finding themselves trying to dig their way out of a hole they were partially digging themselves.

T.J. Warren missed the majority of the season with a foot injury after playing just four games. Victor Oladipo looked nothing like himself in the brief period before he was thrown into the four-team James Harden deal. Caris LeVert joined the team and wasn’t allowed to play  for a long time because of a cancerous mass discovered on his kidney. Myles Turner missed 25 games, Malcolm Brogdon missed 16 games, and Domantas Sabonis missed 10 games. The Pacers limped through much of the season before demolishing Charlotte in the Play-In Tournament opening game. After that, they fell to the Wizards, missing the playoffs for the first time since 2015. Shortly after the end of the season, they fired Bjorkgren and started looking for a new coach.

This upcoming season, the Pacers will have another new head coach in Rick Carlisle. Carlisle, who parted ways with the Dallas Mavericks in the offseason, was hired by the Pacers front office after they fired Bjorkgren. It was reported that Bjorkgren apparently lost the trust of his players, which could be on the main reasons why the Pacers management had to make that very difficult personnel decision.

Having said that, it is also true that Carlisle will inject a much-needed presence and experience in the Pacers’ locker room. In fact, this is not the first time that Carlisle will be coaching for this team. After his stints as assistant coach for the New Jersey Nets and the Portland Trail Blazers, Carlisle fulfilled the same role for the Pacers from 1997 to 2000. He then accepted a head coach role for the Detroit Pistons for the following couple of years before going back to Indiana to be their head coach from the 2003-04 NBA season up to the 2006-07 NBA season.

Carlisle, who will turn 61 years of age this October, comes in with a lot of playoff experience and wins. After his first stint as head coach of the Pacers, Carlisle then took his expertise and knowledge of the game to the Dallas Mavericks where he achieved a lot of playoff success, including the Larry O’Brien championship trophy when they beat LeBron James, Dwyane Wade, Chris Bosh and the Miami Heat during the 2011 NBA Finals.

When Carlisle looks at the team he is inheriting, he is reminded less of those Pacers teams he coached 15 years ago and more of the two teams he led in Detroit in his first head coaching gig. Those teams didn’t necessarily have household names in the starting lineup, but they played together and raised the level of each player on the floor with  them. Domantas Sabonis and Malcolm Brogdon are two promising young stars, but not on the level of some of the other heavyweights in  the league. Carlisle calls Myles Turner the best rim protector in the league. Warren and LeVert can be potent scorers. But Carlisle is here to inject some grit.

“We’ve got to lay this out in a way that makes sense to these guys,” he said. “I’ve got to sell them on making sacrifices and having each other’s back and doing the hard things.” It didn’t take long at his introductory zoom meeting for Carlisle to start saying “we” when referencing the steps the Pacers need to take to re-establish themselves in the league. He caught himself while saying it, almost marveling that he was actually back in a place that means so much to him and his family. Not long ago, he was pulling himself out of Dallas amid a chaotic scene above him in the Mavericks front office.

Along with Carlisle, the other new key names on the Pacers’ bench are veteran combo forward Torrey Craig, and rookie shooting guard Chris Duarte. The Pacers front office did not do much movement in terms of their roster, but they were able to retain their core that includes LeVert, All-Star big man Domantas Sabonis, all-around point guard Malcolm Brogdon, scoring small forward T.J. Warren, and defensive and sweet-shooting big man Myles Turner.