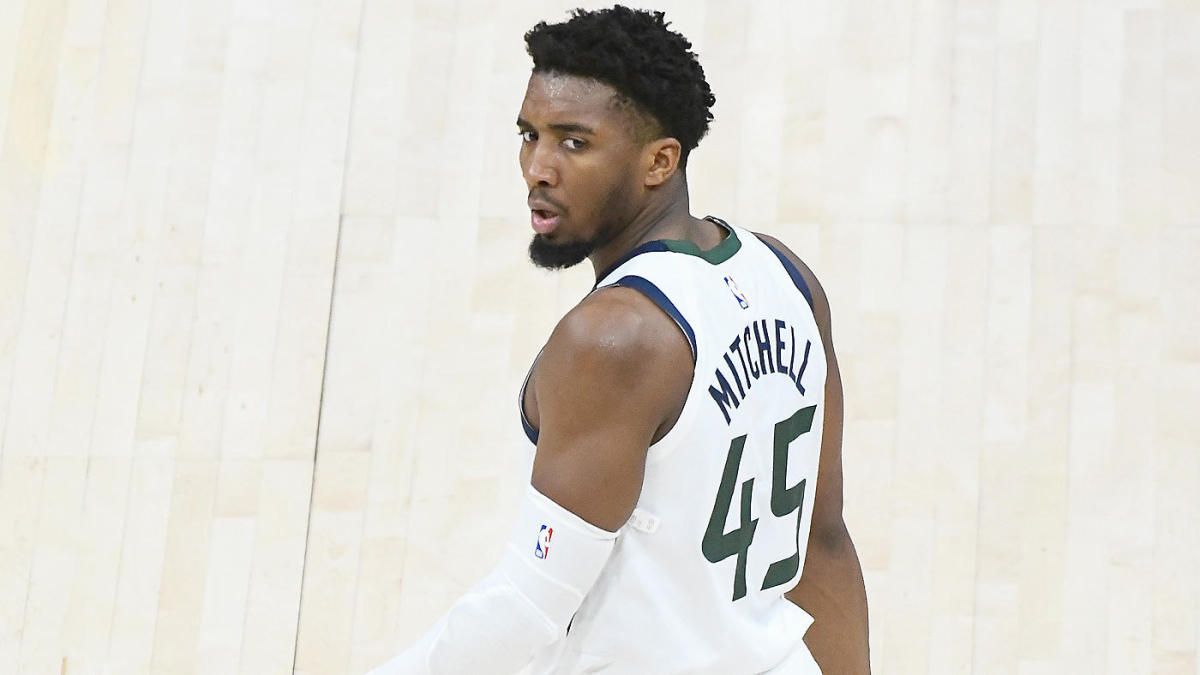 Do not look now, but it has become apparent that Utah Jazz star shooting guard Donovan Mitchell is ready and healthy for the 2021 NBA Playoffs. Mitchell suffered an ankle injury during an April 16 game against the Indiana Pacers. He only logged in a total of 21 minutes in that win, finishing with a stat line of 22 points, 4 rebounds and 2 assists.

Mitchell then missed the Jazz’ last 16 regular season games, and then sat out Game 1 of their first-round playoff series against Ja Morant and the Memphis Grizzlies. The Jazz lost that game on a three-point decider, but then they received the good news that Mitchell will be listed as available to play in the next game.

Sure enough, Mitchell quickly made an impact in his first game coming off the unfortunate ankle injury. The two-time All-Star shooting guard poured in 25 points, 2 rebounds and 1 steals, including an excellent 5-10 clip from the three-point line.

As per Nick Friedell of the ESPN, Mitchell said that he certainly felt good the whole game. While it is true that he was still thinking of his injury in the first couple of possessions, Mitchell pointed out that he just had to trust all the hardwork and patience that he put in during his recovery process from the ankle injury.

"I feel good," Mitchell said after the game, which tied the series 1-1."I've put myself in kind of treacherous situations to come back and be ready for playoff intensity. I felt better than I anticipated, and as a whole, I think the biggest thing as a team is we did a lot of good things tonight ... so it made my job easier. I didn't have to come in and just do everything. I was able to find my spots and attack. And kind of just do what I do. And my teammates made it really easy for me.

I'm not going to sugarcoat that," Mitchell said of the mental aspect of  the injury. "There's definitely a thought. You haven't been in this position in five weeks. And just kind of going out there and everything you've been doing has been controlled. It's been controlled throughout the workouts, so to kind of go out there in the middle of the playoffs and then try and compete, I think there's definitely a bit of nerves. ... It's just basketball, but jumping off the foot for the first time hat hard, landing, cutting those are the things you definitely think about, but once you get through the first two, it's like 'All right, I'm good.' You trust it, and I was fine."

Mitchell and the Jazz would go on to defeat the Grizzlies in Game 2 of their first-round playoff match-up. It is definitely true that Mitchell received ample support from his incredible teammates in this game. Fellow All-Star Rudy Gobert delivered an all-around performance of 21 points, 13 rebounds, 3 assists and 4 blocks. Mike Conley also had his own double-double outing of 20 points and 15 assists, while Jordan Clarkson and Joe Ingles accumulated a total of 30 points off the bench.

The Jazz’ offense looked quite lethargic in Game 1, but that was not the case in Game 2. Of course, it is no coincidence that Mitchell’s presence gave the team a boost on their performance on that end of the floor. The 6-foot-3 spitfire gunner only played 25 minutes, but every second that he was on the court was pure bliss.

Utah’s dominance was on full display, and even had a 22-point lead at one point. The team’s second unit was again clicking on all fronts as they outscored the Grizzlies’ bench, 43-14. The Jazz’ defense also forced the Grizzlies to commit turnovers, and the team pounced on it by totalling 21 points off turnovers.

Still, it was Mitchell’s return that certainly inspired the Jazz to bring their A-game in Game 2 of their first-round playoff match-up against the Grizzlies. Jazz head coach Quin Snyder, who is currently positioned to possibly win the Coach of the Year award this season, emphasized that Mitchell did not force a lot of shots early on, which is a usual tendency for a player who is coming off a long injury layoff.

Instead, Snyder said that Mitchell was patient and that he let the game come to him. Prior to Game 2, Mitchell was quoted as saying that he was obviously upset that the Jazz medical team and coaching staff advised him to sit out the first game of the series to stay in the cautious side of his situation with the ankle injury. That only means that Mitchell could have played if given the green light, and that explains why he was frustrated, especially with the Jazz losing that game.

So, the fact that Mitchell kept his composure and patience in Game 2 certainly speaks about his high level of maturity as a player and as a leader of this Jazz squad.

Mitchell's performance came just a couple of days after he acknowledged being "frustrated and upset" after being a late scratch prior to Game 1. Following all the intrigue surrounding his absence and a surprising Game 1 loss to Ja Morant and the upstart Grizzlies, Mitchell's teammates and coaches knew the 24-year-old changed the game quickly.

"Any time you've been out for a significant period of time, I think  there's a tendency to try to really put a stamp on the game," Jazz coach Quin Snyder said. "And I thought he really let the game come to him. He was patient. He got a few catch-and-shoot 3s early where he got good looks, got off the ball and kind of made a simple play. And then I think as the game went on, you saw him attacking the basket, but he really played within himself. I thought he just made the right   play and obviously it was good to have him back. It certainly changes our team."

But of course, there is still a lot of work cut out for the Jazz. Even though they came up with the best record in the entirety of the league in the regular season, the playoffs is always a different beast to tame. In the past couple of years, Mitchell and the Jazz have bounced out of the playoffs in the first round. So it is very understandable that people will doubt the Jazz until they manage to forge a deeper postseason run this time around.

On the other hand, it is also true that the Jazz has reached greater heights this season. They are not just good on defense anymore. They are also excellent on the offensive end of the floor. Aside from Mitchell and Gobert’s star power, Conley has proven that he has now adapted to the system that Snyder has put forth in this team.

Still, it seems like it all boils down to how far Mitchell can take them, especially during the playoffs when the stakes are higher. As per Zach Kram of The Ringer, Mitchell’s return bolsters the Jazz’ array of offensive schemes, and spells doom to the Grizzlies’ defensive strategies.

If Utah advances to the second round, Mitchell won’t be the best    scorer on the court against either the Mavericks, with Luka Doncic, or the Clippers, with Kawhi Leonard and Paul George. But Mitchell offers a singular scoring dynamic for this Utah roster. The nine-man rotation features five creators, all with different skill sets: Mitchell, Mike Conley, Joe Ingles, Bojan Bogdanovic, and Jordan Clarkson. Unique among that group are Mitchell’s one-on-one ability and shotmaking panache— crucial skills at the end of close playoff games. Mitchell had by far the team’s highest usage rate in clutch situations this season.

Mitchell’s return also yields ripple effects that make all his teammates’ roles simpler. Ingles can shift out of the starting lineup to bolster the bench unit. Conley, with 15 assists Wednesday, can shift into more of a distribution role rather than a scoring role. Bogdanovic and Clarkson can more precisely pick their spots on offense. And that’s to say nothing of the difficult choices Mitchell thrusts on the opponent, which must slot its best perimeter defender on Mitchell, worsening its defense on all of Utah’s other options.

The Game 3 of the Jazz-Grizzlies first round playoff series is scheduled on May 29, Saturday. It will be a tough battle to come out on top of for Mitchell and the Jazz. They cannot forget that Memphis Grizzlies’ young and talented star point guard Ja Morant is coming off an incredible Game 2 performance in which he scored 47 points, grabbed four rebounds, and dished out seven assists.

Game 3 of this Western Conference first round playoff series will be played at the FedEx Forum, the home arena of the Memphis Grizzlies.