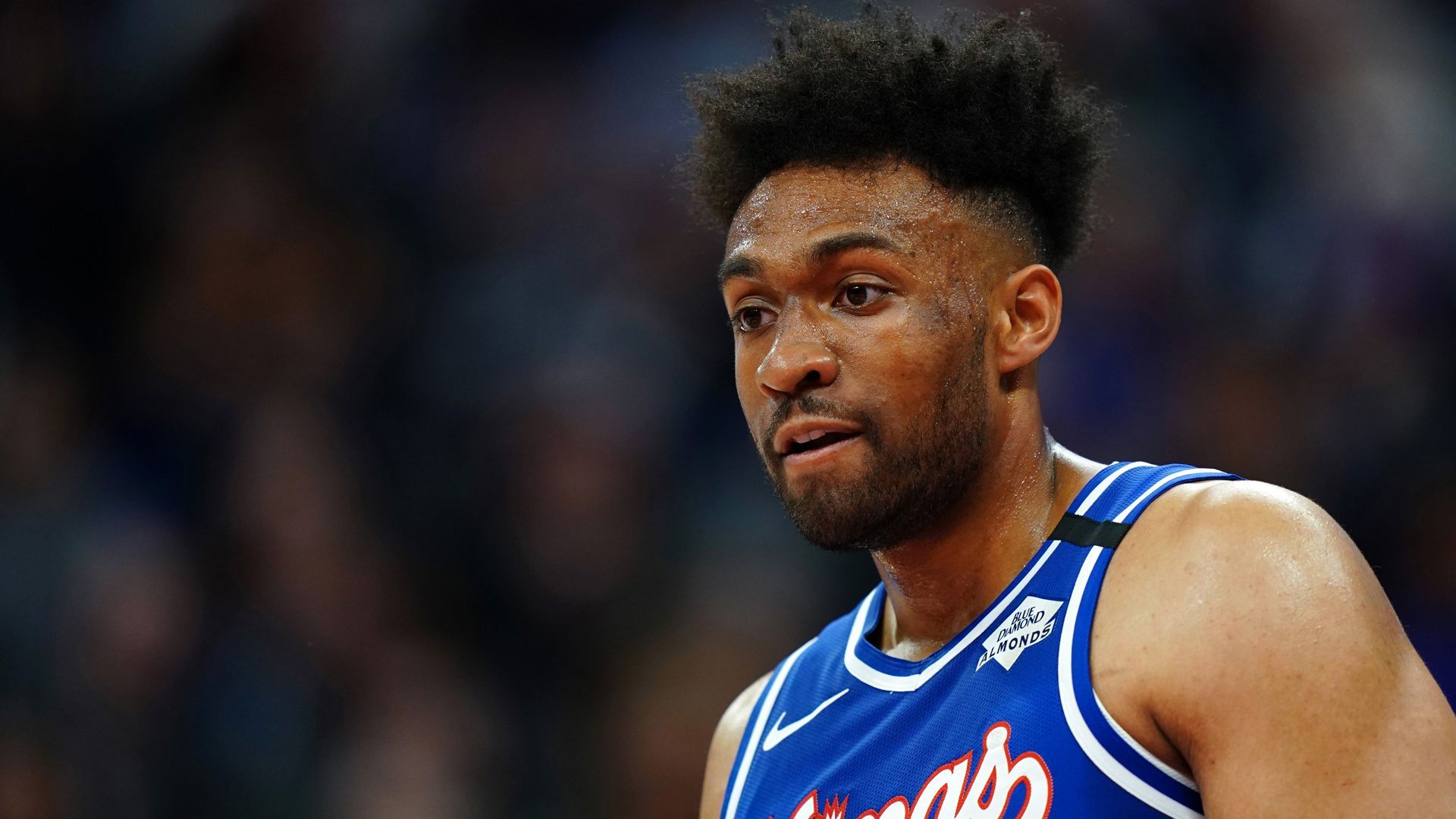 Three Sacramento Kings hoopers have announced that they have tested positive for the coronavirus, and one of them is combo forward Jabari Parker. In his personal statement officially released by the Kings organization, Parker reiterated that it has been “several days” since he went into full quarantine upon learning that he contracted the virus.

"Several days ago I tested positive for COVID-19 and immediately self-isolated in  Chicago which is where I remain. I am progressing in my recovery and feeling well. I  look forward to joining my teammates in Orlando as we return to the court for the resumption of the NBA season."

The 25-year old scoring power forward is averaging decent numbers of 14.7 points, 5.9 rebounds, 1.8 assists and 1.3 assists this season. He played 32 games for the Atlanta Hawks before being part of a mid-season trade that landed him in Sacramento. He has only appeared in one game for the Kings, logging in 15 minutes while putting up 4 points, 4 rebounds and a couple of assists.

Parker has been quite a story in the NBA. Selected 2nd overall by the Milwaukee Bucks during the 2014 Draft, there’s no doubt that the 6-foot-8 forward has been a consistent scorer throughout his six-year career. He has put up double-digit scoring averages every year, and has shown that he can make buckets from almost anywhere.

But it is also true that Parker has not lived up to the billing as a second overall draft pick. Before entering the NBA, Parker was one of the most hyped up prospects along with Andrew Wiggins, who was the top overall pick in that same draft class.

Right now, Parker is bent on proving that could still pour in big contributions to any team. He has been on different teams for much of the past couple of years. The Chicago native also said that he relished his brief stint with the Bulls, though it did not produce the results that they want to see. As per NBA.com’s Sam Smith, Parker said that there’s no love lost between him and the city of Chicago.

"It was great. I love my experience here just because I met some great people. I love my teammates, got a chance to get a great group of relationships with my teammates.  And I really mean that. I love those guys. That (the Bulls) was somebody that wanted me from the beginning. It wasn't all about money because not a lot of people knew my financial situation. People only knew about the Bulls. I just wanted to be here for the city and try to be here as much as I can for the city.

I handled everything I could with the situation I had. I made the best of it and more importantly the man upstairs knows my heart and that's what I care about the most. I'm still from the city. I'm still from Chicago. So I'm always going to come back. That doesn't change as much. I'm rooted here. I don't forget where I come from. If it was meant to be, it was meant to be. If it wasn't mean to be, then, hey, that's OK. No love lost."

The Kings are one of the 22 teams invited for the season resumption. It remains to be seen if Parker will have a consistent spot in head coach Luke Walton’s rotation, especially now that they just signed veteran small forward Corey Brewer. Still, Parker’s ability to score is valuable and it’s just a matter of him doing more on the defensive end.

Len, another Kings player, has also tested positive for the coronavirus. The 27-year old big man was acquired by the Kings through that same trade deal that landed them Jabari Parker. Shams Charania of The Athletic reported about this development, and included a personal statement from Len.

“I underwent testing yesterday in Sacramento and was found to be positive for COVID-19. I want to thank the Sacramento Kings for their great care and the NBA for putting the protocols in place to allow me to catch this early. I have immediately entered isolation and look forward to being cleared and rejoining my teammates for our playoff push.”

Having arrived at Sacramento the same time with Parker, Len has enjoyed more minutes on the court. With the Kings trading Dewayne Dedmon and Marvin Bagley still sidelined due to an injury, Len has become a valuable rotational piece for the team. He is logging in 16.7 minutes per contest, while norming 6.6 points, pulling down 7.1 boards, and rejecting 1.4 shots.

It’s still up in the air if Bagley will be medically-cleared for the season resumption, although expectations are not that high. Jason Jones of The Athletic hosted a mailbag column, and mentioned that it’s unlikely that Bagley will have tons of minutes if he indeed returns this season.

“Bagley hasn’t played in an NBA game since January, so his layoff is nearly two months longer than the rest of the team. If Walton’s first time bringing Bagley back from injury is an indicator, Walton will use him as a backup power forward and center and that’s what I expect.

It would be a mistake to force Bagley back into the starting lineup and disrupt the chemistry of the group that was starting in March. Nemanja Bjelica at power forward and Bogdan Bogdanovic at shooting guard probably gives the Kings the best chance at immediate success, which the Kings will need if they are going to make the playoffs.”

With that said, Len could be assured that he will have the minutes in the season resumption. Of course, his priority right now is to quarantine himself and get rid of the virus. But Len’s excellent rebounding, partnered with an above average scoring on the other end of the floor, should be of essence for this relatively young Kings squad.

Not one, not two, but three Kings hoopers have unfortunately contracted the coronavirus. Scoring guard Buddy Hield has tested positive for the virus, although it is being reiterated that the 27-year old spitfire gunner is in good condition. Jason Anderson of The Sacramento Bee wrote a column about this development, and mentioned that Hield himself assured everyone that he is doing just fine.

“Kings guard Buddy Hield seemed to be in good spirits Thursday, a day after he and two teammates revealed they tested positive for the coronavirus.

In a brief exchange with The Sacramento Bee, Hield said “I’m good” and he believes he will “be fine by Monday,” but it will probably be at least two weeks before the 27- year-old sharpshooter is cleared to resume basketball activities under the NBA’s COVID-19 protocols.”

This comes at the heels of the news surrounding Hield’s teammates Jabari Parker and Alex Len, who also are in quarantine after testing positive for the virus. Hield, who is putting up all-around numbers of 19.8 points, 4.8 rebounds and 3.1 assists, is a key cog of this Sacramento squad.

Although there seems to be a bit of a fallout between him and the team after he was demoted to a sixth man role at the second half of the season, the Kings still depend a lot on Hield’s scoring. There are speculations that Hield may want to be traded out of Sacramento if this sixth man trend continues. But if the Kings pull off a stunning comeback to snatch away the last playoff spot in the Western Conference, Hield may just change his perspective and deem his sixth man role as a norm.

As for the Kings’ health situation, this trend of players contracting the virus should not be ignored. Marcos Breton of The Sacramento Bee chimed in his thoughts on the matter, and emphasized that the league should just cancel the rest of the season.

“The NBA should cut its losses and cancel the remainder of this season before more players test positive for COVID-19. Honestly, what are we doing here?

So many of us have missed the NBA since it shut down on March 11, the week the coronavirus interrupted our lives and made close human contact dangerously contagious. Well, now star Kings shooting guard Buddy Hield has reportedly tested positive for the virus. Kings forward Jabari Parker confirmed that he tested positive for COVID-19 and is self-isolating in Chicago. Kings center Alex Len confirmed he did as well.”

It also doesn’t help that the season resumption will take place in Florida, where the COVID-19 cases are increasing in number.