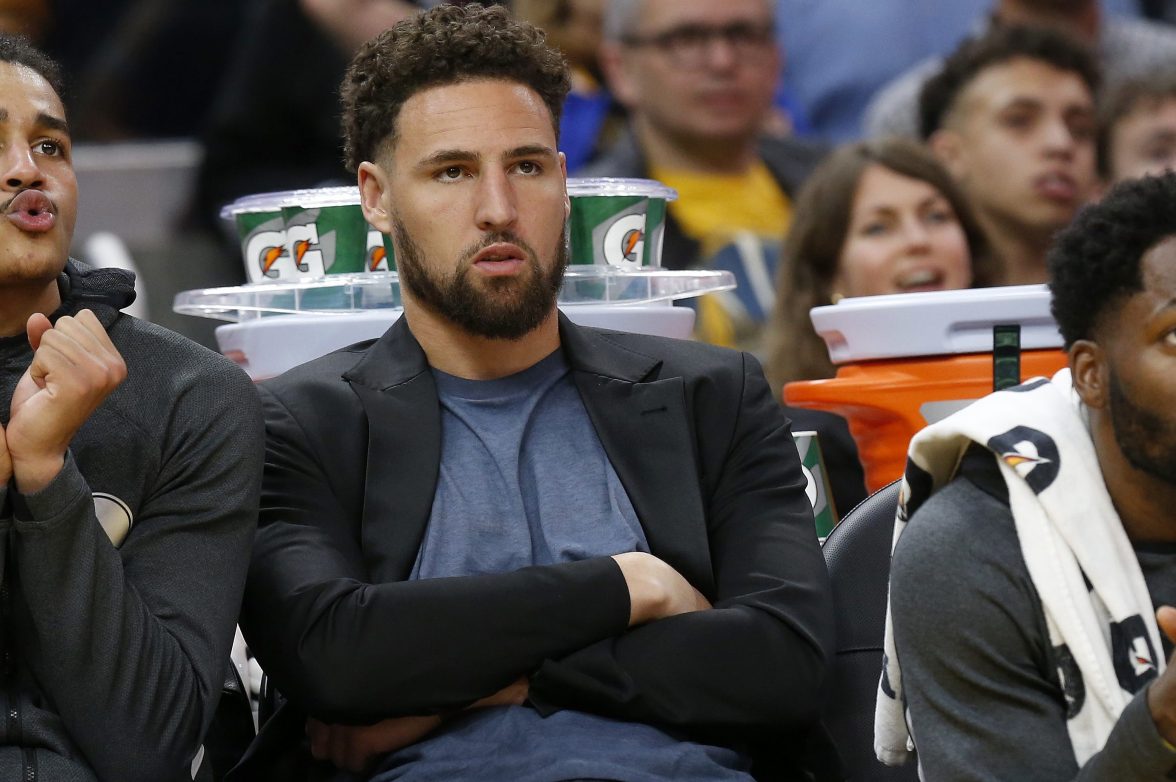 The Golden State Warriors are aiming to reclaim their throne next season, as they were expecting to have a healthy Klay Thompson back in the roster. However, the Warriors suffered a major blow to their title aspirations, as Thompson will miss the entire 2020-21 NBA season after multiple reports confirmed that he suffered a torn right Achilles tendon based on an MRI on Thursday.

According to ESPN, Thompson suffered the injury while working out in Southern California on Wednesday. The superstar guard was reportedly playing with several NBA players when he felt pain in the calf area, and was unable to put weight on his left leg after the incident. It was a crushing blow for Thompson, as he also missed the entire 2019-20 NBA season due to a torn ACL he sustained during the 2019 NBA Finals.

Thompson was reportedly informed that based on the type of tear in his Achilles, he could make a full recovery and would be ready to return before the start of the 2021-22 NBA season. Warriors general manager Bob Myers said that he knows that Thompson has a strength of will needed to recover from a huge setback, but he admitted that the development was painful for him, Thompson, and the entire Warriors organization.

Warriors owner Joe Lacob also admitted that Thompson's latest setback is "personally devastating" for him. While the mood is hard to fathom because of the magnitude of the injury, Lacob expressed confidence that Thompson will persevere and recover again from another major injury. The Warriors owner added that they would give Thompson the time he needs to recover fully before making his return to action.

"He’s got a lot of basketball left in him," Lacob said of Thompson via NBC Sports. "He will recover from this and his job is waiting for him when he returns. I would like him to spend as much as he can with the team and his teammates. And even with me. I offered that up. I said stay involved. Because it’s going to be tough for him to get through this and we all know that."

Thompson was about to play in the second season of his five-year, $189.9 million contract, which he actually signed after suffering from an ACL tear. The Warriors were hoping that Thompson's return would help them become a threat again at least in the Western Conference, which is currently dominated by the two Los Angeles teams -- the Lakers and the Clippers.

While the Warriors are optimistic, there are more questions now on Thompson's ability to regain his confidence and form that he had before the ACL injury. Tim Kawakami of The Athletic admitted that while Thompson has shown resilience over the past several months, he admitted that it is hard to imagine him becoming the impactful player that he once was after suffering a second major injury.

"It was actually hard to imagine Thompson being at that level again after the ACL tear," Kawakami said. "Now adding in an Achilles, going into his 30s, there’s little doubt that he will be a lesser player when he is back on the floor again. It’s just a discussion of how deep the decline will be and whether he’ll have to adapt his game significantly and the Warriors adapt around him, if possible. He might make a lot of  3-pointers into the future, but the days of Thompson as a two-way terror and All-NBA   candidate are almost certainly over."

The Warriors knew about the injury shortly before they selected James Wiseman as the second overall pick in the 2020 NBA Draft. Wiseman would have been a great fit alongside Curry and Thompson. There were rumblings that the Warriors might change course by selecting LaMelo Ball, but they still opted to go with Wiseman. The former Memphis standout is oozing with potential, but it remains to be seen how much of an impact he'll have in the NBA.

Kawakami admitted that losing Thompson effectively made the Warriors incapable of beating the Lakers and the Clippers in a seven-game series to regain their throne in the Western Conference. Zach Harper also told The Athletic also said that Thompson's injury is likely the final nail in the coffin for Golden State's dynasty because their core players are not getting any younger.

"This Klay Achilles’ tendon injury was the death knell for the dynasty," Harper said. "You don’t have to win straight through for it to be a dynasty. Technically, the Spurs had a dynasty for 15 years. It’s about the chance of winning the title every single year or nearly every single year that makes it a dynasty. By the time Klay is back, he won’t have played for two years. Curry will be in his mid-30s."

Lacob was asked if he thinks that the dynasty is still alive, and he told Kawakami that he does not know what to say about it, and it will all depend on the moves that they can make before the start of next season. He admitted that Thompson is irreplaceable, but he is still optimistic that they can at least be a good team that would make the playoffs next season.

The Memphis Grizzlies will be an intriguing team to watch next season after almost making the playoffs this year. However, the Grizzlies would need to rely a lot on reigning Rookie of the Year Ja Morant early in the season, as they are expected to miss Jaren Jackson Jr. and Justise Winslow.

Grizzlies executive vice president of basketball operations Zach Kleiman told the Commercial Appeal that both Jackson and Winslow are still recovering from the injuries they sustained inside the NBA bubble. He said that while the morale within the organization is high, they will not make decisions that could hurt the future of the team.

"We're still taking the long view on everything that we're doing. That's what we're building towards," Kleiman said of deciding on when to allow Jackson and Winslow  to play. "With injuries, we're going to be patient on these things. We're not going to do anything that sets back the long term vision."

Jackson, who averaged 17.4 points and 4.6 rebounds for the Grizzlies last season, suffered a torn meniscus in his left knee inside the NBA bubble. Initial projections suggested that the 21-year-old forward would be ready to return in time for next season, but Kleiman said that it is now unlikely because the upcoming season will start earlier than what they were initially expecting.

"Jaren is ahead of schedule but now he is coming off a repair of the meniscus, which is a real surgery," Kleiman said of Jackson. "We can't wait to have Jaren back as soon as he's ready to play but it's going to be a minute."

Kleiman did not give a timetable for Jackson's return. But as for Winslow, who averaged 11.3 points on top of 6.6 rebounds and 4.0 assists last season, Kleiman revealed that the defensive-minded forward is unlikely to miss a lot of games as he is recovering well from his hip injury.

"I would say that Justise is going to return early this season. It might not be day one, but no setbacks," Kleiman said. "He's been in our facility in Memphis, working out twice a day, doing an awesome job in his rehab and we'll be excited to have him early in the season."

Kristaps Porzingis to Be Unavailable for Start of Next Season

The Dallas Mavericks also need to wait to play at full strength, as they are expected to miss Kristaps Porzingis at the start of the 2020-21 NBA season. Porzingis underwent surgery to repair a torn meniscus in his right knee, which he sustained in Game 1 of their first-round playoff series against the Los Angeles Clippers.

Mavericks president of basketball operations Donnie Nelson said that they are taking a cautious approach on Porzingiz's return from the injury. For his part, the Latvian star is optimistic about his recovery, saying that the rehab is much easier than what he experienced when he was trying to return from a torn ACL.

"I’m rehabbing six days a week," Porzingis said. "Just doing a lot of rehab stuff and strengthening the quad and just focused on the rehab pretty much. The good thing about this is that compared to the ACL, this one is like almost day-by-day I can see some progress. The ACL, I would say it was like walking in a desert a little bit. This one is moving faster and I’m making progress quicker, and I'm feeling good."

Porzingis, who signed a five-year deal worth $158 million with the Mavericks last year, averaged 20.4 points and 9.5 rebounds on top of 2.0 blocks and 1.8 assists for the Mavericks last season. The 25-year-old power forward helped the Mavericks reach the playoffs after missing the postseason for three consecutive years.