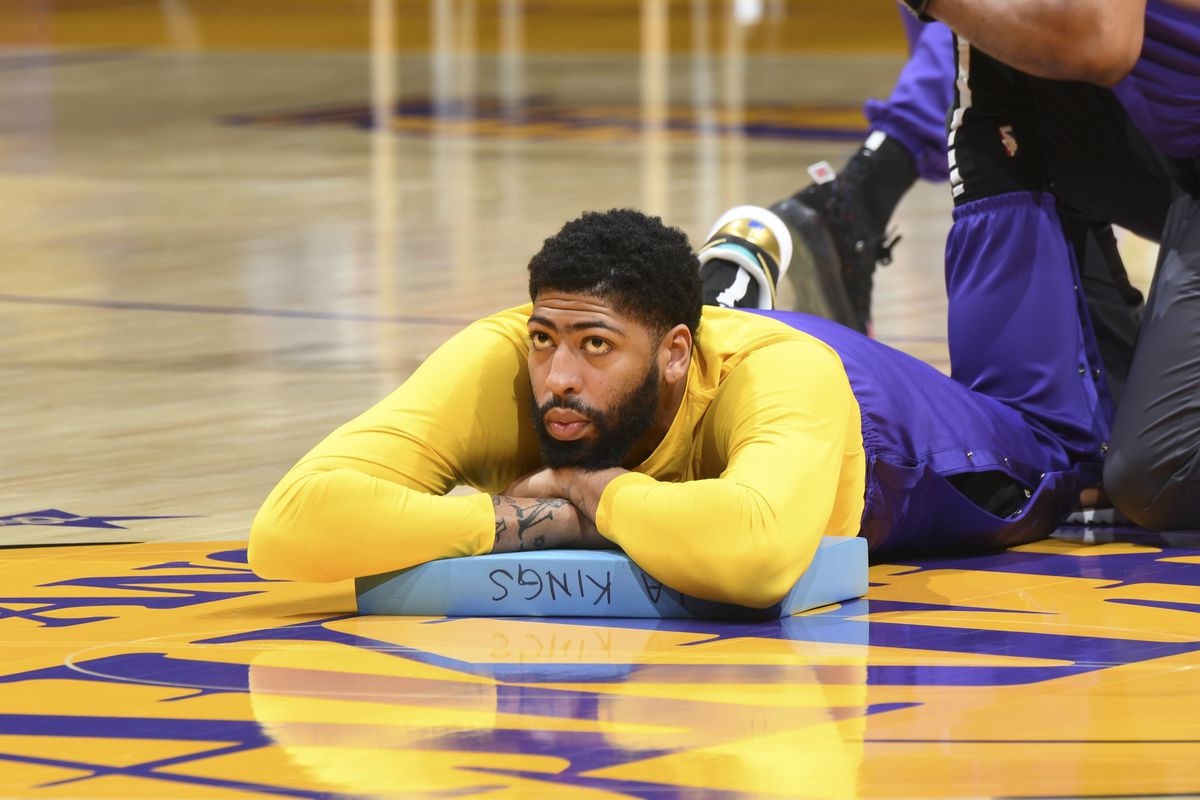 After a couple of months of being sidelined by an injury, Los Angeles Lakers superstar big man Anthony Davis is finally returning to action. Davis, who has been out since the 14th of the month of February, has finally recovered from the calf strain injury that has been keeping him out for two months now.

Davis, who is on his second year with the Lakers, is putting up all-around numbers of 22.5 points, 8.4 rebounds, 3.0 assists, 1.3 steals and 1.8 blocks this season. He is also notching a career-high 53% clip from the field, although his three-point shooting percentage has gone down to only 29%. But there is no doubt that Davis could bounce back from that drought, especially now that the NBA is approaching its last stretch run towards the more important games in the playoffs.

As per Greg Beacham of the Associated Press, Davis is set to return to action when the Lakers go up against MVP candidate Luka Doncic and the Dallas Mavericks on Thursday night. Davis said that he did not want to come back if he knows that he has not totally recovered from the calf strain injury. Davis also says that the pain that he felt in his calf was something that he has not felt before, which makes the injury more terrifying than it looked.

Davis then emphasized that he focused on breaking down games in film sessions and talking and interacting more with his teammates. At this point in his illustrious career, Davis is looked upon as a leader and an elite star, and he is bent on showing all those positive attributes when he suits up again for the defending champs.

It was something I’ve never felt before as far as pain. I didn’t want to have to go through that again. … I’ve felt pain there before, just going through the process the  first time I injured it, but the second time — knock on wood, I never tore an Achilles, but I kind of felt like sharp pain, like it was ripping, which I never felt before. It was tough to flex my foot. I knew it was something serious. It wasn’t as serious as it could have been, but it was still a pretty significant injury. I think that’s  how I stayed engaged and got my fix not being able to play, just being in the gym with the guys and breaking down the games for the guys and helping them learn. It kind of helped me become a better leader as well. It was good for me, but I think it was also good for them to hear my voice.”

Davis, the first overall pick in the 2012 NBA Draft, was selected by the New Orleans Pelicans, who were still named as the Hornets back then. Davis was immediately thrust into a starting role for New Orleans, and he averaged impressive numbers of 13.5 points, 8.2 boards, 1.2 steals and 1.8 blocks, while logging in only 28.8 minutes per game, a testament to how efficient he was in just his first year in the league.

Davis has been selected to the All-Star Game eight times in his career, and he won his first NBA championship during the Lakers’ successful title run last year. He was also named as the Most Valuable Player in the 2017 NBA All-Star Game, and a four-time All-NBA Team member. On top of all these accolades, Davis is also a tremendous defensive player. He led the league in blocks for a total of three seasons, and was named to the All-Defensive Team four times already. It is not a secret that his elite two-way skill set makes him one of the most coveted superstars in today’s positionless type of basketball.

Now that he is returning to action to help the Lakers avoid entering the play-in scenario at the end of the regular season, Davis is expected to carry a heavier workload especially with LeBron James still sitting out due to an ankle sprain injury. It also remains to be seen how he would mesh with newly-acquired center Andre Drummond, who the Lakers signed via the buyout market.

As per Christian Rivas of SB Nation’s Silver Screen and Roll, Davis says that he has “high hopes” for Drummond’s impact on both ends of the floor. Davis also reiterated that he is almost sure that they could build a much-needed chemistry on the Lakers frontcourt.

“Dre’s a good adapter. We had a couple of plays today in practice where we connected, but he’s a good adapter, he’s always asking questions. He asked me today “AD if you catch it here, where do you want me to go? If you’re doing this, where you want to be?’ He’s always trying to learn knowing that it’s different when   I’m on the floor, his role changes a little bit. I think it’ll be fairly quick for us to really adapt to each other because we’re both guys who want to learn from each other and want to win at the end of the day, and when you got two guys that want to win, you find ways to make it happen.

I think he’s a great fit for us. He’s been great for so far, but he’s only going to get better. The more he continues to learn the system and the more me and him play  with each other, we’ll get better. And then when ‘Bron comes back and he’s getting  his lobs, he can he can be the Andre Drummond that everybody is looking forward to, which he’s been, but he really is going to blossom and show everyone why he wanted to come here.”

Drummond started the season with the Cleveland Cavaliers, but the two sides eventually reached a contract buyout agreement that paved the way for the former All-Star big man to enter unrestricted free agency. In the seven games that he played for the Lakers, Drummond has put up averages of 11.6 points, 8.9 rebounds, 1.9 assists and 1.6 steals per contest, while logging in 24.6 minutes.

With Drummond’s intimidating presence on both ends of the floor, the Lakers now have an athletic rim protector, something that they really lacked of when both JaVale McGee and Dwight Howard switched teams during the off-season. While it is true that their acquisition of veteran center Marc Gasol has been beneficiary on both offense and defense, Drummond’s unique skill set as a capable rim protector and an elite rebounder is something that the Lakers will need when they defend the likes of Nikola Jokic in the playoffs or even a player like Joel Embiid if both the Lakers and the Philadelphia 76ers reach the Finals this year.

As for the Lakers as a whole, they are currently sporting a decent record of 35 wins against 23 defeats, which is good for the 5th spot in the stacked Western Conference standings. It has been quite a long while since they last fielded in either Davis or James. Even with those two superstars sitting out, the Lakers are still holding on mainly because of their work on the defensive end of the floor.

The Lakers are ranked second in opponent points per game (106.1) and first in defensive rating in the league (106.2). Those stellar numbers they are putting up on defense has been sustaining them, even if their top two scorers are not on the active roster. As per Dave McMenamin of ESPN, Lakers head coach Frank Vogel says that they have to take it up as a challenge and have that tough collective mindset moving forward. Even before the trade deadline passed last month, Vogel already told his players that each one of them has to be ready for anything that will happen, most especially if one of their key cogs gets injured.

That's the reality though. That's where things stand, and that's why this moment, less than 48 hours before Thursday's trade deadline, has some of the same feeling for the Lakers that it did two days before the deadline two years ago.

"My expectation is we're going to win games with this group, and I believe in the group that we have," Vogel said. "If nothing happens [at the trade deadline], we're gonna win games and we'll figure out a way to win games during this stretch, and it will benefit us in the long run. I'm not sure if we'll see any changes or not. ... Most trade deadlines are a lot of talks that result in nothing, and that's my expectation as a coach."

But of course, things are not that good in the defending champs’ camp. With both James and Davis sitting out a lot of games, the Lakers have been struggling to rack up the wins across the board. For one, Drummond is still struggling to be really effective, evident in the drastic dip in his shooting percentages in the seven games that he has played for the Lakers.

Drummond is just shooting a lowly 46% overall clip from the field, which happens to be his lowest output in the nine seasons that he has been in the league. He is also turning the ball over 2.7 times each game, and is committing 4.1 fouls per contest. This is not something that Drummond or the Lakers coaching staff will panic about, but it is a certainty that Drummond is struggling as a Laker.

In a separate column written by McMenamin for the ESPN, Drummond admits that he is indeed struggling on the court as of late. Drummond even described it as the worst stretch of his career, but he also emphasized that he knows that things will change for the better soon.

"Offensively, this is probably the worst I've played in my career," Drummond said after Tuesday's game at Spectrum Center in Charlotte. "I'm still trying to figure it out here. I'm not allowing it to take me out of my game. I know why I'm here, which  is to help this team defensively. Offensively, it will come for me.

I think for us as a team, we're going to find a way to get it done when guys come  back healthy," he said. "Because you got to think, we're playing with a different five every night when we're stepping on the court. So you can't expect us to have much chemistry when we don't know who we're playing with each and every night. So we're hanging our hat on defense and allowing that to project us to a win.”

But young Lakers forward Kyle Kuzma also chimed in on this particular situation, saying that Drummond is still transitioning to the system that a championship organization like the Lakers have in place.

"I mean, it's just a process, man. It's not going to happen overnight. Rome wasn't   built overnight," Kuzma said. "I think for him, it's a big adjustment. When you think about it, he's kind of never really been coached in his career -- in Detroit, in Cleveland and then coming here to a championship organization, it's tough. It's  tough."

After their recent 111-97 loss to Rudy Gobert and the Utah Jazz, the Lakers will then embark on a four-game road trip starting with a mini two-game series against Doncic and the Mavs, followed by a game against Wendell Carter and the Orlando Magic. The Lakers will then finish their road trip with a tough match-up against Russell Westbrook, Bradley Beal and the streaking Washington Wizards.