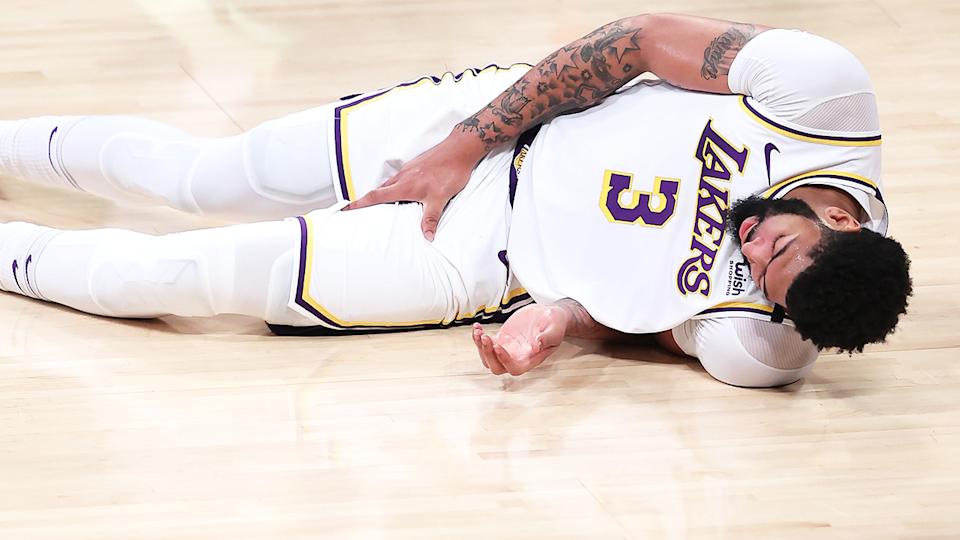 The Los Angeles Lakers continue to be hit with injuries this season, and the latest setback could be a big hit on their lofty hopes of returning to the NBA Finals stage to defend the championship they won against Jimmy Butler and the Miami Heat in the version of the Finals last year.

Davis played only 19 minutes in Game 4 of the Lakers’ first round playoff match-up against Chris Paul and the Phoenix Suns, and finished with six points, four rebounds, three assists, one steal and one block while norming a 2-9 overall clip from the field, including a measly 0-3 shooting from the three-point line.

The reason for his unexpected early exit from the game was a strained groin inury that he suffered in the second half. Davis drove down the baseline, went up for a difficult reverse lay-up then appeared to wince on his way down. He stayed on the ground for a few minutes then managed to walk on his own. However, it was already obvious right there and then that he was in a high level of pain. Davis did not return to the game, and the Lakers lost the fourth game of the series.

With Davis now listed as day-to-day in the defending champs’ injury report, veteran big man and former NBA champion Marc Gasol still likes their chances against the Suns. As per Christian Rivas of SB Nation’s Silver Screen and Roll, Gasol reiterated that the mindset and approach to win every game are still there for the Lakers. Gasol also says that there is still “plenty of confidence” in the defending champs’ locker room, and that they just have to execute their game plan on both ends of the floor.

In the three games that Gasol has logged in for the Lakers this playoffs, the veteran big man has put up averages of 7.0 points, 4.3 rebounds, 2.3 assists and 1.3 steals, while logging in 20.0 minutes per contest.

“Obviously you miss a guy like AD, you center a lot of the offense around him, but I’m sorry, to me that’s not enough,” Gasol said after the Lakers’ loss on Sunday. “To me we have to have a ‘next man up mentality.’ I know that sounds cliche, but that’s the truth. We’ve still got to execute whatever we’re doing on the floor defensively, offensively, take more control of the game, dominate physically, communicate. All the little things that go by, possession by possession, that you need to do to win playoff games.

There’s plenty of confidence that we can win without AD, that’s not even a question for anybody in the locker room,” Gasol said. “Obviously you lose him in the game, that can kind of get your mind off track a little bit for some people. It shouldn’t though. I don’t know if that was the case to be honest... But we’ve just got to keep playing. It’s as simple as that.”

Davis’ injury and probable absence in Game 5 will certainly be a huge loss for the Lakers. It is no coincidence that when Davis plays great in this series, they have won in those games. In Game 1 which the Lakers lost via a nine-point decider, Davis only produced 13 points on a lowly 31% clip from the field, while missing the target on his two attempts from beyond the arc.

But the landscape of the series quickly changed when Davis put up masterful performances in the next two contests. AD came through with a brilliant Game 2 outing of 34 points, 10 rebounds, 7 assists, 1 steal and 3 blocks. Then he followed it up with an almost similar dominant showing in Game 3 when he tallied 34 points, 11 rebounds, 1 steal, and 1 blocks, while going 50% from the field and norming a stellar 12-14 clip from the free throw line. The Lakers won in both of those games that Davis stamped his class on the Suns’ frontcourt.

That is the main reason why Zach Kram of The Ringer looks at Davis as the most important player of the team right now. When he is clicking on both offense and on defense, the Lakers are at their best. There is also the fact that Davis is facing an incredible amount of pressure in this playoffs, especially with LeBron James coming off a long layoff from a severe high ankle injury in the regular season.

That is the first time in memory that LeBron suffered an injury that forced him to miss a significant amount of time. Of course, the four-time NBA Most Valuable Player is still a different beast in the playoffs, but if the Lakers lost to the Suns in this series, Kram noted that it will be the first time in LeBron’s illustrious career that he will be losing in the first round of the playoffs.

That should place enough emphasis and pressure for Davis to be always at his greatest in every game this series. Of course, Davis need to recover well from this groin injury first before he can do more damage against Deandre Ayton and the rest of the Suns’ frontcourt.

Heading into the first-round series against Phoenix, the Davis mismatch in particular seemed to weigh on many pundits’ minds when picking the Lakers to pull the technical upset, especially after he torched the Suns for 42 points with LeBron hurt in a win earlier this month. (The Ringer’s Odds Machine, which doesn’t consider individual positional matchups, calculated the Suns as favorites before Game 1.)

There is still time for Davis to fulfill those expectations—and the broader expectations, from LeBron and others, that he would take a step forward this season as an all-around offensive player following his hot shooting in the bubble. One off night is no reason to disregard all prior belief in his abilities. But add in the surrounding context of the Suns’ overlooked  talent, the Lakers’ iffy supporting cast, and LeBron’s injury, and there’s  legitimate pressure on Davis to take on more responsibility. Otherwise, LeBron is in real danger of losing in the first round for the first time in his career.

As for the Suns, possibly facing a Davis-less Lakers squad will not be a sure pathway towards a win. The Lakers are still a deep team in terms of individual talent. Aside from Davis and James, the Lakers are fielding in a strong supporting cast that includes Gasol, Andre Drummond, Dennis Schroder, Montrezl Harrell, Kyle Kuzma, Alex Caruso, Kentavious Caldwell-Pope, Markieff Morris, Talen Horton-Tucker, and Ben McLemore.

But it is also true that this is a Suns squad bannered by two young stars, a proven veteran star point guard, and a bevy of 3-and-D stalwarts that could make a difference in any game. Even with Chris Paul ailing with a bothersome shoulder injury, his presence alone is already a tremendous addition on both ends of the floor.

That was evident in the Suns’ Game 4 victory when Paul put up an exceptional all-around stat line of 18 points, 3 rebounds, 9 assists, and 3 steals, while not committing even a single turnover. It is true that Paul is having a very difficult time in being efficient while playing through his multiple injuries. In this first round playoff series against the Lakers, Paul did not even produce a double-digit output in the scoring column in the first three games.

So it is indeed evident that Paul is hurt, and this could be something that he would sit out if it is in the regular season. As per an article written by Senior Writer Ramona Shelburne for the ESPN, Suns head coach Monty Williams knows how mentally strong Paul is. Williams emphasized that he knows that Paul will be able to handle his injury well and help the team in whatever way there is.

"I'll watch his face to see if I see the same look I typically see from him on a night-in, night-out basis," Williams said before the Suns' 109-95 loss to the Lakers on Thursday night dropped them into a 2-1 hole in the series. "I'm not going to put him in harm's way. I'm probably not the guy to talk to about cruel stuff. I know what cruel is, so it's just basketball," Williams said, alluding to a car accident that killed his wife, Ingrid, in 2016. "I know how bad he wants to win, but at the end of the day, when we get paid to do what we do, you got a beautiful wife and children with a Hall of Fame career.

He's handled these things well, and I don't doubt that Chris will come through this stronger and better. But what we're going through now is not the worst thing in the world. Now, as it relates to his career and legacy, it is hard, and I get that. To be where he is and how he's played  for us, and not be able to play at the highest level, that's hard. But Chris is mentally strong -- he'll be able to handle it and help us the right way."

If the Suns want to make this a really tough series for the Lakers to win, they also have to rely on the able shoulders of young star shooting guard Devin Booker. Booker, who is only 24 years of age, just notched his second straight All-Star appearance this season.

He is producing another all-around stat line of 25.6 points, 4.2 rebounds, 4.3 assists and 0.8 steals per game. His three-point shooting percentage may have dipped to 34% this season, but he is still the same deadly scorer this season. Add to that the fact that he now has a proven and credentialed playmaker in Paul, there is no doubt that Booker has the tools and the resources to drastically improve his overall skill set from this point forward.

It is Booker’s first crack at the playoffs in his young career, and he is already averaging tremendous numbers of 25.3 points, 4.8 rebounds, 5.5 assists and 0.5 steals per game. However, it is also true that he is launching a large volume of field goal attempts to get there. Booker is only producing a lowly 40% overall clip from the field, including a measly 26% clip from beyond the arc.

It is true that Booker is struggling to be efficient with his shooting percentages, and that has something to do with the fact that the Lakers are filled with tough-minded veterans who know what to do in their defensive schemes. They have scouted Booker a lot, and they are putting the young Suns star in places where he would have the utmost difficulty in putting up a shot.

Still, Booker is a multi-dimensional scorer and he could still impact the game in more ways than one. Just his mere presence alone forces the Lakers to second-guess on their decisions on defending the whole team. As per Jonathan Tjarks of The Ringer, Booker has not even taken a step back even with the arrival of Paul and the continuous development of Ayton.

Despite the arrival of another lead guard, Booker hasn’t taken much of a step back. But he has adjusted his game to make Paul more comfortable. The biggest change is his drop in assists, from 6.5 per game last season to 4.3 this season. Going from Ricky Rubio to Paul as his backcourt partner meant that Booker would have to give up some control of the offense. There’s no point in trading for Paul to play him off the ball. Booker has become more of a pure scorer, averaging a career high in 2- point percentage (55.6 percent on 12.3 attempts per game) and is just off  his career high in 3-point percentage (38.7 on 5.7 attempts).

He’s a bucket-getting machine. Only 11 players in the NBA this      season have reached his marks in efficiency and volume from 2-point range. That list includes some of the biggest, strongest, and most athletic players in the league.