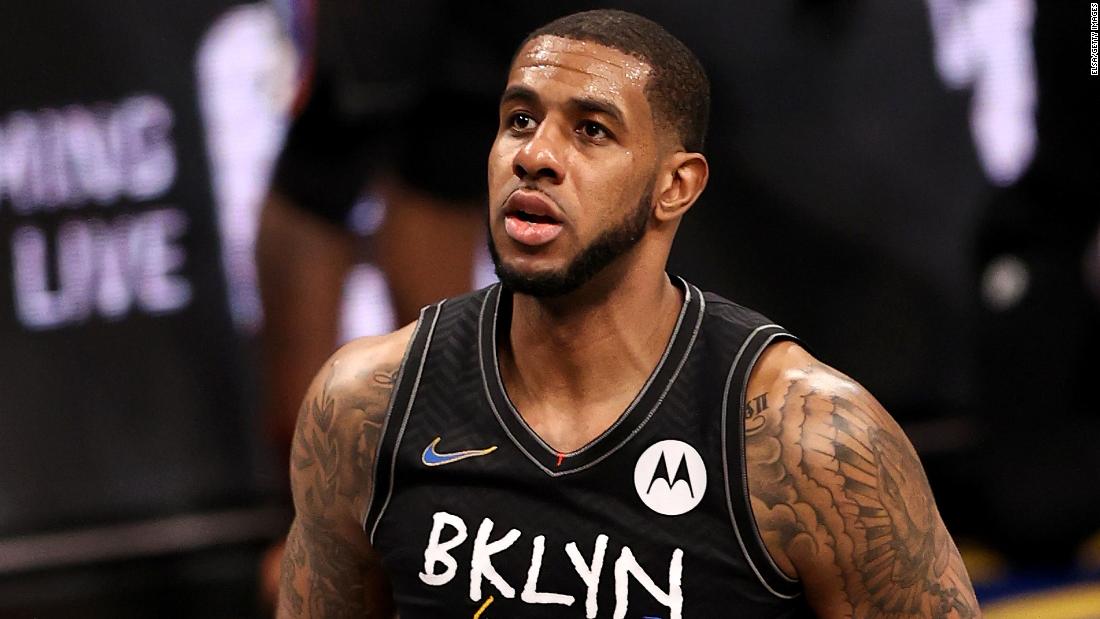 Seven-time All-Star combo big man LaMarcus Aldridge has retired from playing in the NBA. The sudden announcement shocked the basketball community all over the world as Aldridge revealed that he experienced an irregular heartbeat during a recent game between the Brooklyn Nets and the Los Angeles Lakers, in which he put up decent numbers of 12 points, 3 rebounds, 2 assists and 3 blocks, while making five of his eight field goal attempts.

It is indeed an unfortunate turn of events for Aldridge, who previously reached a contract buyout agreement with the San Antonio Spurs that paved the way for him to join established stars like Kevin Durant, Kyrie Irving, James Harden and Blake Griffin in Brooklyn. It was obvious that the Nets organization looked at Aldridge as someone who could bring in leadership and experience, on top of his unique skill set as an excellent frontcourt player who can torch opponents both inside the paint and even on the mid-range.

The 35-year old Aldridge retires from the NBA after a very productive 15-year career that started in the year 2006. Aldridge was the second overall pick in the 2006 NBA Draft. He was selected by the Chicago Bulls but Aldridge never played in the Windy City. The Bulls traded his rights to the Portland Trail Blazers in exchange for a draft pick, Tyrus Thomas and Viktor Khryapa.

It was during his illustrious tenure with the Blazers that he became an All-Star power forward in the league. He was also able to forge excellent partnerships with some of the backcourt stars that Portland has seen don their jerseys in the past two decades. He first created a star tandem with Brandon Roy, who is one of the greatest what-ifs in NBA history. Roy had a bright future ahead of him, but multiple major injuries stripped him of his career.

But the loss of Roy opened up to a new door with Damian Lillard entering the league in 2012. Lillard immediately made his presence known, and his partnership with Aldridge produced consecutive playoff appearances for the Blazers. After the shocking announcement of Aldridge’s retirement, Lillard provided heaps of praises for the veteran combo big man. Lillard also emphasized that there is no doubt that Aldridge’s Blazers jersey should be retired in Portland. (as per Aaron Fentress of The Oregonian)

“I came in and I was like, I just want to be the best compliment to him. Let him know he had like a real running mate in me. I’m going to be ready to go when it’s good, when it’s bad, whatever. As a young player, sometimes it could be uncomfortable because you’re in a room full of stars that you grew up watching and you’ve never been there before, so going into something like that with a teammate  was helpful.

His jersey should be retired here. It’s just sad that he couldn’t go out on his own terms. The fact that it’s something related to his health, which is the most important thing, basically took him out of the game instead of him deciding when he wanted to stop. But he has two beautiful sons and me having kids now, I know how important it is to be around and watch them grow, and to be a part of raising them and loving them as a parent. That comes first. I told him I feel like you made the right decision.”

As for Aldridge, there is no doubt that he has built a case to be enshrined in the Naismith Basketball Hall of Fame years from now. He has been selected to seven All-Star games, with four selections coming from his time with the Blazers, and three more with his tenure in San Antonio. Aldridge was one of the best post scorers in the past decade, and he did not do it with brute strength or elite athleticism.

Aldridge was one of the most-skilled frontcourt players in the past several years. He has that patented turnaround fade-away jumper on the post, and the high release point in his jumper makes it possible for him to shoot even over the outstretched arms of a defender. On top of that, Aldridge can also shoot consistently from the mid-range, and he is mobile and skilled enough to take his defenders off the dribble and blow past them for a drive down the lane.

Aldridge’s best scoring year came during the 2014-15 season when he notched 23.4 points, 10.2 rebounds, 1.7 assists, 0.7 steals and 1.0 blocks per game for the Blazers. However, Aldridge decided to jump ship when he entered unrestricted free agency after that season. The 6-foot-11 power forward decided to sign with the San Antonio Spurs in 2015, as he was touted as the team’s next cornerstone following the impending retirement of the legendary Tim Duncan.

Aldridge and the Spurs would also enjoy much collective success in their partnership, but they were never able to win a championship. They even reached the Western Conference Finals in 2017, but a Kawhi Leonard ankle injury in Game 1 of that series derailed their hopes of possibly beating the mighty Golden State Warriors and potentially returning to the NBA Finals. As per Kevin Pelton of ESPN, that series was actually Aldridge’s deepest run in the playoffs, so it was really unfortunate that Leonard went down with that ankle injury.

By the end of that period, Aldridge was in San Antonio, having left the Blazers as the most coveted free agent on the market in the summer of 2015 to sign with a Spurs team two years removed from winning a championship. The addition of Aldridge figured to push San Antonio to a new level after a relatively down 2014-15 by its standards (55-27), and it did: The Spurs won a franchise-record 67 games in Aldridge's first season with the team, tied for the seventh-most wins in NBA history.

There was only one problem: The 2015-16 Golden State Warriors were busy setting the league record with 73 wins, leaving San Antonio seventh in NBA history but second in the Western Conference. That meant a brutal matchup with the Oklahoma City Thunder in the conference semifinals, where the Thunder upset   the Spurs before nearly doing the same to the Warriors. With Kevin Durant in the Bay and Kawhi Leonard sidelined after spraining his ankle on Zaza Pachulia's infamous closeout into his landing spot in Game 1 of the 2017 Western Conference finals, San Antonio got swept in the deepest playoff run of Aldridge's   career.

With Aldridge entering the twilight stages of his career in the past couple of years, countless rumors of him being potentially traded would always come up in media platforms. That is certainly as expected, especially with the Spurs fielding in young talented players like Dejounte Murray, Derrick White, Keldon Johnson, and Lonnie Walker IV.

A trade never happened, but Aldridge and the Spurs front office eventually reached a contract buyout agreement last month. It was not the ending to a productive partnership, but the writing was already on the wall with this move. In his last few games with the Spurs this season, Aldridge was demoted to a role off the bench, and logged in a measly amount of playing time.

As a matter of fact, Aldridge only logged in 25.9 minutes in the 21 games that he played for the Spurs this season, which is his lowest since his rookie year during the 2006-07 season. Aldridge only averaged 13.7 points, 4.5 rebounds, 1.7 assists, 0.4 steals and 0.9 blocks per contest with the Spurs, and this drastic dip in his production on the court was also a result of the fact that his role greatly diminished in San Antonio this season.

Aldridge would join the Nets following his contract buyout with the Spurs, a move that gave Brooklyn the post scorer that they lack this season. By joining a powerhouse quartet in Durant, Irving, Harden and Griffin, Aldridge’s arrival even bolstered the Nets’ chances of going all the way to the NBA Finals this year, and potentially winning it all, especially with all the star power they have on their powerhouse roster.

As per Dan Devine of The Ringer, Aldridge will be known in NBA history as a multi-faceted post scorer who has both the size and the skill set to inflict damage on opponents, especially on the defensive end of the floor.

Aldridge’s game came to be viewed as somewhat anachronistic, as the focus of  scoring in the NBA moved from the low post and midrange to beyond the 3-point  arc. But he remained a player of consequence throughout nearly his entire career—a viable scoring threat, valuable offensive piece, and underrated defender until age and injury started to chip away at his game. (Even then, he showed signs of being able to contribute as a reimagined stretch-5, knocking down nearly 39 percent of his 3-point tries over the last two years with a newfound comfort and volume.)

At 6-foot-11 and 250 pounds, a level of bulk that belied the balletic grace he evinced as he pivoted and pirouetted, Aldridge presented a rare package of size, skill, and scoring touch, averaging at least 17 points per game for 13 straight seasons. Watching him work from the left block was like attending a master class in low- post footwork: Year after year, he bedeviled the best interior defenders in the business with an evil array of feints, counters, step-throughs, and turnaround fadeaways. Once he’d created space, he’d rise up, flicking the jumper with that signature, impossibly high release afforded by his 7-foot-5 wingspan—a skyscraping    delivery that even the best of the best couldn’t touch when he was feeling it.

As for the Nets organization, there is no doubt that they have been incredibly supportive of Aldridge’s decision to prioritize his health over everything. After all, basketball is not the only important thing in Aldridge’s life. The 35-year old veteran combo big man also has a family and children, and it is very important for Aldridge not to put his health and body in a great risk so that he can be with his family for the years to come.

But if we are to talk about the Nets’ chances of competing for the NBA Finals this season, it is really unfortunate that they will be losing Aldridge. Still, they have three superstars in the peak of their abilities, a solid coach in Steve Nash, and an underrated supporting cast who can shoot and score the rock from almost anywhere.

After their recent loss to the Philadelphia 76ers, the Nets will be going back home to host Terry Rozier and the Charlotte Hornets. After that match, they will then embark on a three-game road trip that will feature tough games against Jimmy Butler and the Miami Heat, Zion Williamson and the New Orleans Pelicans, and excellent combo forward Pascal Siakam and the Toronto Raptors.