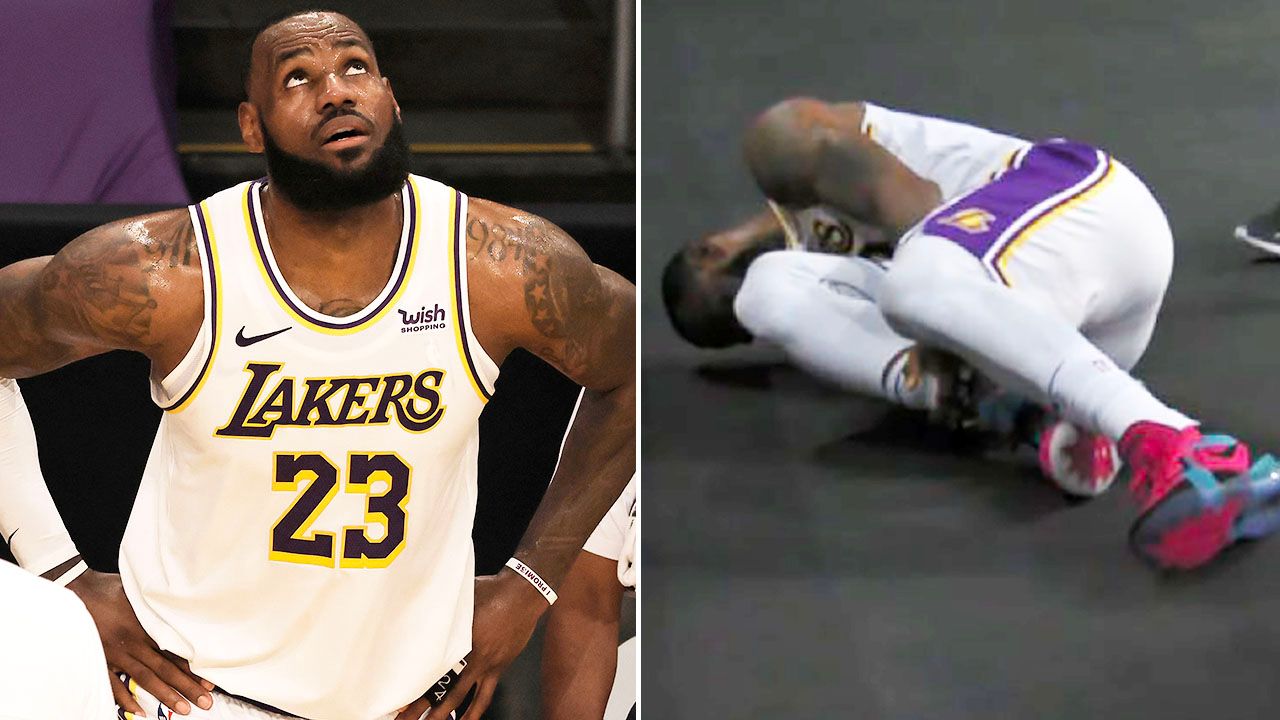 NBA Injury Report: LeBron James Assures Everyone That Ankle Injury Is A Thing Of The Past

Is Father Time finally catching up to the four-time NBA Most Valuable Player and four-time NBA champion? LeBron James has played only 45 of the Los Angeles Lakers’ 72 games this season, and there is a feeling that the 36-year-old superstar might just have entered the twilight stages of his very illustrious and productive basketball career.

This is the first time in his career that LeBron has missed that much games in the regular season. That setback has been caused by his high ankle injury, which he re-aggravated during the fourth quarter of the Lakers’ win against the New Orleans Pelicans last Sunday. It was a worrisome scene to see, especially with the Lakers fighting for a playoff spot in the stacked Western Conference.

But James says that his ankle is “fine” and that he just tweaked it a bit. James also said earlier this month that there is a feeling that he won’t ever get back to a 100% healthy form at this point of his career. As per Dave McMenamin of ESPN, James also emphasized that he will be there for his team even if he’s not yet fully-recovered, especially with the team not yet assured of a spot in the first round of the playoffs.

"For my first game in six weeks, I felt OK. As far as my wind, I felt pretty good. As far as my ankle, it was a little tight at times, obviously. But I came out unscathed and pretty good. So it's a good start. It's only nine games left. It's just been ... it's been a hell of a season, obviously. ... But we look forward to the challenge. It is what it is. This is the season, and we've got to make the most out of it.

It's been urgency for me to get back ever since I got injured. So that's just who I am. You guys could have seen the logging of the minutes and hours per day that I was doing as far as rehab and treatment, it was a lot more than I slept. So over the last six weeks, that's all I've been doing, is having an urgency to get back and play. I knew I wasn't going to get back to 100%. It's impossible. I don't think I will ever get back to 100% in my career.”

James has been in the league since the 2003-04 NBA season when he was playing as a highly-touted rookie for the Cleveland Cavaliers. He instantly made his impact in the league, producing an all-around stat line of 20.9 points, 5.5 rebounds, 5.9 assists and 1.6 steals per game as a rookie. James then made it to the All-Star team in his sophomore year, and he has been a part of the February festivities ever since.

On top of the tremendous numbers that James would produce each and every night, it was his ability to stay healthy and available that sustained his superstar status in the league. There is no doubt that James is one of the most explosive athletes in all history of sports, but it is just amazing that he has avoided any kind of major injuries in his career.

So this bothersome high ankle injury is definitely an unfamiliar territory for the Lakers superstar. This comes after the year where he won his fourth Larry O’Brien championship trophy, having led the Lakers to a successful title run in the Orlando bubble last season. So is it time to hit the panic button on this specific LeBron James injury?

It is not a secret that the Lakers’ hopes of defending their title will depend on what kind of LeBron we are getting in the play-in and possibly in the playoffs. The odds are stacked against the defending champs, especially with most of the other elite contenders coming in even healthy and stronger this season. As per Bill Oram of The Athletic, Lakers head coach Frank Vogel says that James provides a unique kind of presence on both ends of the floor, and that is something that they direly need when the league enters the more important games in the playoffs.

Vogel also shed light on why James still played through the rest of the Pelicans game even though he tweaked his ankle in the fourth quarter of that very inspiring win.

“It is a little bit of a snapshot of what we could look like,” Frank Vogel said. “Certainly on the defensive end, we can be a lot better than we were. We’ll have to be if we’re going to win in the playoffs.

James, who is turning 37 years of age this December, is currently putting up excellent numbers of 25.0 points, 7.7 rebounds, 7.8 assists, 1.1 steals and 0.6 blocks per game. James is also logging in 33.4 minutes per contest, and is producing an efficient set of shooting percentages that includes a 51% overall clip from the field, and a 36% clip from the three-point line.

James’ availability may be the biggest factor in the Lakers’ success this season, but it is also true that the members of the team’s supporting cast must step up to the plate. On paper, it seems like the Lakers are fielding in a stronger roster this season. They acquired big-time names in Dennis Schroder, Montrezl Harrell, Wesley Matthews and Marc Gasol last offseason.

On top of that, they also signed former All-Star center Andre Drummond via the buyout market this season. Talen Horton-Tucker is also steadily developing as a young talented swingman, and the trio of Kyle Kuzma, Kentavious Caldwell-Pope, and Alex Caruso surely shore up the rest of the line-up.

Last year, John Hollinger of The Athletic wrote a column where he detailed out about the fact that the Lakers’ supporting cast actually was a key cog in last year’s successful NBA Finals match-up against Jimmy Butler, Bam Adebayo, Tyler Herro and the Miami Heat squad.

And yet … “top-heavy” does not necessarily mean “bottom-light.” This distinction is important in understanding why the Lakers are up 3-1 on Miami right now. Because as much as James and Davis had to carry the offensive load, it’s the Lakers’ depth of quality defenders that has allowed them to wear down opponents in every postseason series thus   far. Those “other” Lakers were the key to the Lakers’ Game 4 win, one where the offense choked and wheezed at times but six supporting players played significant roles in drowning out Miami’s confusing offensive symphony.

Most notably, despite being built around two superstars, the Lakers are actually winning the battle of the benches in these Finals. This wasn’t necessarily a given coming in, especially with the way Tyler Herro had played off the pine for the Heat. Yes, it comes with the asterisk that the Heat had to move two bench players into the starting lineup in Games 2 and 3 because of injuries, including Herro, but L.A.’s bench superiority  has been a common theme throughout.

The Lakers may be at the bottom part of the playoff picture in the West, but their healthy version would certainly be a scary team to match up with in the postseason when the stakes are definitely higher. Despite their lackluster offense this season, the Lakers are still thriving on the defensive end of the floor.