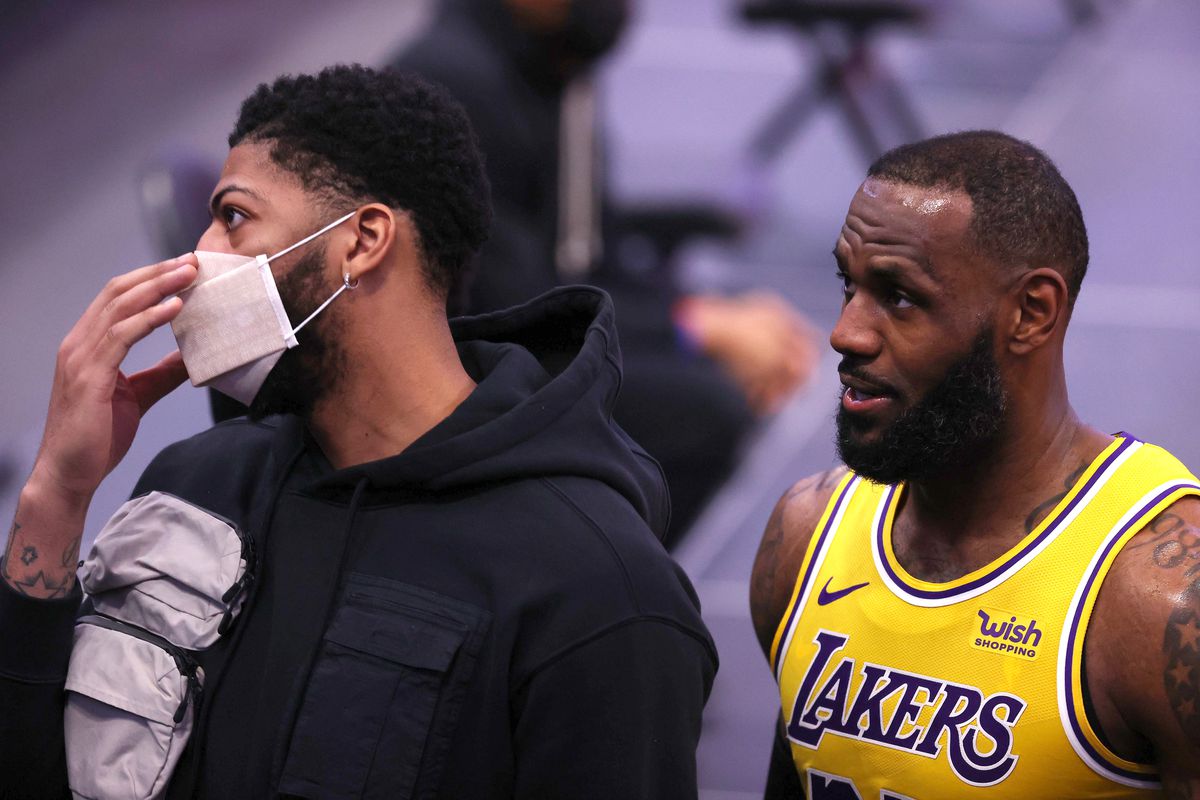 Los Angeles Lakers superstar big man Anthony Davis is set to sit out his team’s games for the next four weeks. The seven-time All-Star, who is on his second year with the Lakers after winning the championship last year, already missed two games due to a minor Achilles injury. He returned to put up an outstanding 35-point performance in a win against the Memphis Grizzlies, but suffered another injury 14 minutes into the Lakers’ contest against Nikola Jokic and the Denver Nuggets.

It first appeared to be a re-aggravation of his previous injury as he was seen holding on to his Achilles area right after the play. Davis did not return to that game, and the Lakers suffered a 17-point loss at the hands of the Nuggets.

As per the expert input of both Andre Snellings and Stephania Bell via ESPN, they chimed in their thoughts on the unfortunate injury of Anthony Davis. It was written in that column that the Lakers star big man went through an MRI that revealed a calf strain and an aggravation of the tendinosis.

“Last week, Davis missed two games against the Thunder and reported       that he was dealing with tendinosis in his right Achilles tendon. Davis         stated that he wanted to be careful while managing the issue because of the location, and he hoped this was a situation where he could miss a couple of games early in the season as a trade-off to be healthy and available for the rest of the season and playoffs.

Unfortunately, Davis aggravated the issue in the second game after he         returned to the court in a scary looking scene, as he repeatedly grabbed    in the area of his Achilles tendon. A subsequent MRI diagnosed Davis with a calf strain and an aggravation of the tendinosis. He was re-         evaluated Thursday and is expected to miss approximately four weeks which means he'll be sidelined beyond the NBA's March 5-10 All-Star       break.”

This is indeed a huge blow for the Lakers, who are also missing the services of scoring point guard Dennis Schroder as he complies with the NBA’s safety and health protocols. Schroder has started in all of the 29 games that he played for the Lakers, and is putting up all-around numbers of 14.2 points, 3.6 rebounds, 4.3 assists and 0.9 steals per contest.

As for Davis, he is currently norming an outstanding stat line of 22.5 points, 8.4 rebounds, 3.0 assists, 1.3 steals and 1.8 blocks per game. His production this season has dipped as compared to his first year with the Lakers, but that’s not to say that he has been playing bad.

Davis is still putting up a solid 53%  overall clip from the field, although his three-point shooting is on a lowly 29%  clip. His scoring may have dipped, but it is also true that the Lakers have shored up their offensive arsenal this season. They brought in Schroder and Montrezl Harrell, two of the frontrunners for the Sixth Man of the Year award last season. Kyle Kuzma is still an excellent scoring punch off the bench, and Marc Gasol has been a frequent recipient of LeBron James’ brilliant kickout passes to the three-point line.

Still, Davis is the second-best player for this Lakers squad aiming to defend their championship last year. There were tons of expectations for him to turn in another MVP-worthy season, but LeBron has been leading the charge for the team. It remains to be seen when exactly he will return to the court, but it is expected that Davis will be placed on a minutes restriction program until the more important games in the playoffs.

“Because Davis has both issues (strained calf and tendinosis)  simultaneously in an acute-on-chronic situation, it makes his treatment     and rehab plan a bit more complicated. While the calf strain might    respond well to pure rest, tendinosis responds best to modified loading.     Applying strategic loading to Davis' Achilles will be a component of       treating the tendinosis, so Davis' rehabilitation will have to be      accomplished in a balanced way that addresses both issues.

There is a good chance Davis will be able to return to the court in the             second half of the season and even contribute at a high level. The               unfortunate news is that he is unlikely to come back after the All-Star        break and immediately play at his typical level. While there are a lot         of details and factors that we don't know from a distance, it's  reasonable to assume Davis could see some minute limitations when he returns or reduced back-to-backs, with an incremental return to his normal minutes.”

If it takes some time for Davis to return to a fully-healthy form this season, expect the Lakers front office to gauge the trade market or the buyout market for another frontcourt player who can put the ball in the hoop on a more consistent basis.

Reports have it that the Lakers are interested in bringing back DeMarcus Cousins, who is now set on parting ways with the Houston Rockets after just a brief partnership this season. Cousins was with the Lakers in the first half of the regular season last year before he was waived by the team. A Torn ACL injury that he suffered the offseason prior negated any chance for Cousins to log in even a single game for the storied Lakers franchise. But if the Rockets buy out his contract, there is no doubt that a reunion would be beneficial for both Cousins and the Lakers organization.

It may be a couple of weeks more before the Portland Trail Blazers get back their star shooting guard CJ McCollum. The positive takeaway from his road to full recovery is that McCollum is indeed putting in the progress. As per the team’s president of basketball operations Neil Olshey, McCollum will be evaluated again after a couple of weeks.

“CJ McCollum, who suffered a left mid-foot fracture on January 16   against the Atlanta Hawks, continues to progress in his return to action, it was announced today by Trail Blazers president of basketball operations, Neil Olshey.

McCollum, who was examined today by team medical personnel, will no           longer be required to wear a walking boot and will advance to the next               stage of his rehabilitation. He will be reevaluated again in two weeks.              Further updates will be provided as appropriate.”

McCollum has been one of the best shooting guard to lace it up this season, there is no doubt about that. You could even make a case that he is having an underrated MVP-caliber year as he is putting up stellar numbers of 26.7 points, 3.9 rebounds and 5.0 assists per game on a very efficient 44%  clip from beyond the arc.

That outstanding stat line definitely speaks of an All-Star player, and McCollum could have been on his way to the March festivities if he did not get injured after the 13 games that he logged in this year. The Blazers also provided video updates of McCollum, who was recently seen returning to the team’s practice with Jusuf Nurkic, who is also injured.

During his recovery from the foot injury, McCollum’s name has also been swirling on the trade rumors. Stefan Bondy of the New York Daily News recently made it known that the New York Knicks are interested in trading for the Blazers star shooting guard, although it remains to be seen if Portland is willing to let go of their 29-year-old spitfire gunner.

“The Knicks have been linked to other potential trade targets in            various reports, including Zach LaVine in Chicago, Victor Oladipo in        Houston and Lonzo Ball in New Orleans. A source said they’re also  monitoring Portland’s CJ McCollum, who is rehabbing from a broken foot  and still has about $100 million guaranteed over three years after this  season.

The Blazers (18-10) have played well since McCollum’s injury, with  shooting-guard replacement Gary Trent Jr. rising to the occasion. But it’s unclear if Portland is willing to deal McCollum.”

The Knicks, who are on their first year under new head coach Tom Thibodeau, are currently putting up a surprisingly good season so far. They are sporting a 15-16 record, good for the 7th spot in the Eastern Conference. They came in without a true star on their roster, but Julius Randle’s sudden emergence has given them a potential star power that they can rely upon when they put on a serious chase for a coveted playoff ticket.

Still, this is a long shot for the Knicks. McCollum loves to play with his long-time backcourt partner Damian Lillard, and the Blazers are also fielding in a very strong supporting cast. If we are talking about the chances of possibly competing for a championship ring, there is no doubt that McCollum is better off staying in Portland where his chemistry and continuity with the team can help them to finally break out of the middle pack of the stacked Western Conference.