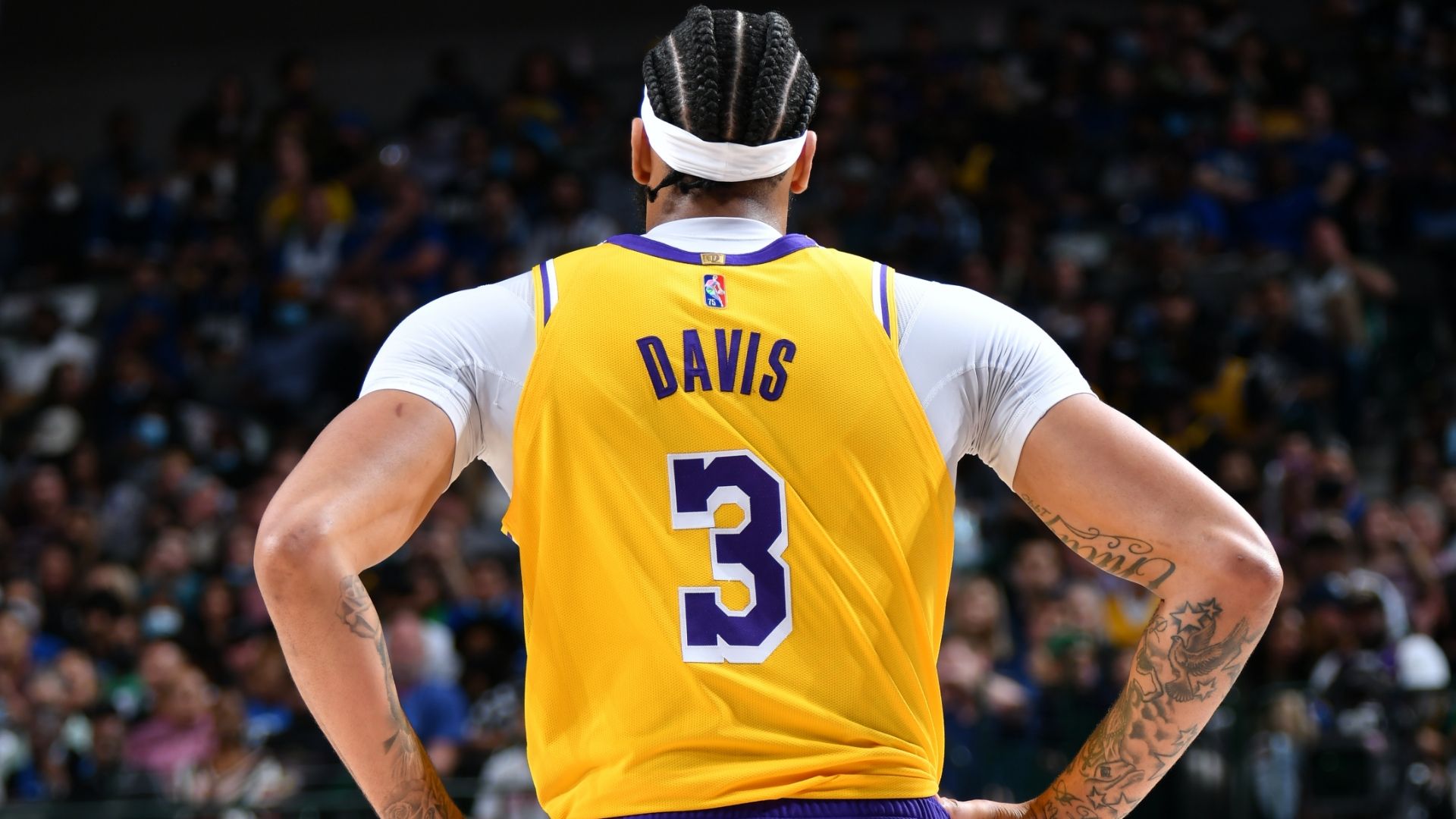 After missing a significant period of time, Los Angeles Lakers superstar big man Anthony Davis has now returned to the team’s active lineup during their 106-96 victory over superstar shooting guard and former Most Valuable Player James Harden and the short-handed Brooklyn Nets. Davis has missed a total of 17 games due to an MCL sprain injury that he suffered last December. During that period of time in which he was sitting out, there was no doubt that the Lakers missed his elite services on both ends of the floor. Davis, when he is healthy and available, is still one of the best two-way players in the league, and there is also an argument that he is a Top 3 talent in that category.

In his return from a long 17-game absence, Davis only logged about 25 minutes as the Lakers coaching staff were obviously trying to manage his workload and taking an extra precaution to get their superstar big man accustomed to the pace of an NBA game again. In the 25 minutes that he logged in, Davis was able to put up a decent stat line of eight points, two rebounds, two assists, one steal, and four blocks, while only turning the ball over once. He made three of his eight total attempts from the floor, missed his only three-point attempt, and made both of his two trips to the free throw line. Davis also committed four fouls, and accumulated a game score of 7.2.

The victory over the Nets was the Lakers’ third win in the last five games, including victories over the Orlando Magic and another one over the Utah Jazz. Along with Davis’s contributions on both ends of the floor, the Lakers also got significant contributions from their key players. LeBron James again led the charge for the team as he put up another tremendous all-around stat line of 33 points, 7 rebounds, 6 assists, 3 steals, and 2 blocks, and did not even commit a single turnover in the 34 minutes that he logged in the win. Star point guard Russell Westbrook committed a team-high five turnovers, but he still stuffed the rest of his stat line with 15 points, 6 rebounds, 4 assists, and 1 steal. The Lakers also got plenty of contributions from their second unit, particularly from shooting guard Malik Monk, who put up a stat line of 22 points, 5 rebounds, 2 assists, and 1 steal, while making seven of his 13 field goal attempts, including six made attempts from beyond the arc. Veteran combo forward Carmelo Anthony also came off the bench to put up 13 points, 3 rebounds, 1 assist, 2 steals, and 1 block, and made four of his 10 total attempts from the field, including three of his seven tries from deep.

With Davis now in the active lineup, there is no doubt that the Lakers should be able to do better than they did in the past couple of weeks. As per a column written by Jonathan Tjarks for The Ringer, Davis has the potential to become an even better and more impactful player, especially if he has that mindset of always attacking on offense at all times.

The game plan against Davis has always been to get physical, crowd him,  and hope that he takes himself out of the game by putting up jumpers. That’s what Houston tried in the second round with P.J. Tucker. It worked well in Game 1, with AD becoming a meme for his difficulty overpowering the smaller opponent. He scored 25 points in the Lakers loss, but only had one assist. The series-altering adjustment that Los Angeles made in Game 2 was  downsizing and moving Davis to center, which gave him more room to attack.    Houston never figured out a counter, with Davis averaging 29.7 points and  five assists over the next three games. He’s a much more dynamic offensive player at the 5. His true shooting percentage in the playoffs with McGee  (56.7) and Howard (56.7) on the floor isn’t in the same ballpark as what it is without them (71.5). The two big men are a pair of governors on the Lakers’ engine. Take them off and the team starts flying.

That’s what Smith was getting at when he asked Davis about playing his  “natural position.” People have been questioning his reluctance to play center  his entire career. The comparison with players like Tucker, who embraced the demands of the position despite being only 6-foot-5, only makes AD’s preference look worse. The subtext of James Harden’s comments after the  Rockets upset the Lakers in Game 1 last round—“I don’t care if you’re 7-feet.If you don’t have heart, it doesn’t matter.”—was fairly obvious. Playing Davis at center was easy against the Rockets. Guarding Jokic, who is averaging 25.4 points and 5.9 assists per game in the playoffs, is a completely different challenge. Davis can’t shut him down. The key is making him work without  fouling and then getting those points back on the other side of the ball. Davis has an easier time scoring on Jokic than Jokic has scoring on him. They are the two best centers in the league. Both are great offensive players. But only   Davis is a great defensive one. Los Angeles needs him to win that matchup. Denver isn’t going away down 0-2. It has already come back from two 3-1 deficits in the playoffs.

Davis was the top overall pick in the 2012 NBA Draft. He was fresh from an excellent year with the Kentucky Wildcats in which he nabbed an NCAA title, while also winning the NCAA Final Four Most Outstanding Player award, and the consensus national college player of the year. He came into the league as the most hyped prospect in a draft class that includes top-tier stars such as Bradley Beal, Damian Lillard, Draymond Green, and Khris Middleton, along with other good players like Dion Waiters, Harrison Barnes, Terrence Ross, Austin Rivers, Andre Drummond, Evan Fournier, Tomas Satoransky, and Will Barton. The notable undrafted players in that class also include role players such as Kent Bazemore, Jonathon Simmons, Mike James, and JaMychal Green.

Davis played the first half of his illustrious career with the New Orleans Pelicans, where he was named to the All-Rookie First Team while also notching six appearances in the All-Star Game. He carried the Pelicans to multiple appearances in the playoffs, but they never made a deep run in the postseason, which was understandable considering that they are positioned in a stacked Western Conference. Their little team success forced Davis to request a trade to a contending team, and the Pelicans front office granted his wish, sending him to the Lakers during the offseason prior to the 2019-20 NBA Season. Davis helped the Lakers nab the championship in his first year with them, and there is no doubt that he is the integral key that will unlock further success for the team, especially with the fact that they are fielding a lot of new faces on the roster this season.

Throughout his entire productive career, Davis has collected a lot of individual accolades such as being a member of the NBA 75th Anniversary Team. He was also named to the All-NBA First Team four times in 2015, 2017, 2018 and 2020, to the NBA All-Defensive First Team two times during 2018 and 2020, to the NBA All-Defensive Second Team two times in 2015 and 2017, and to the All-Rookie First Team in 2013. He also led the league in blocks per game for three seasons, and was named as the NBA All-Star Game Most Valuable Player in 2017. He is also an eight-time NBA All-Star, and he has won two Gold Medals while representing the USA men’s national basketball team in the 2012 London Olympics and the 2014 Spain World Cup.

This is also Davis’s third year in Los Angeles. Through the 28 games that he played this season, the All-Star big man is putting up a productive stat line of 22.8 points, 9.6 rebounds, 2.8 assists, 1.2 steals, and 2.1 blocks per game, while also producing a set of shooting percentages that include a 51% overall clip from the field, a 17% clip from the three-point line, and a 73% clip from the free throw line. The numbers, especially the shooting percentages, have taken quite a dip but it is still true that Davis’s presence makes the Lakers a far better team on both ends of the floor. As per a column written by Dan Devine for The Ringer, losing Davis’ elite services on offense and defense was definitely a very tough pill to swallow for the 2020 NBA champions.

It’s hard to find silver linings in the Lakers losing Davis—an eight-time All- Star who ranks second on the team in minutes played and points per game, and who leads it in rebounding and shot blocking—for what could be 15 to 20 games. (And potentially longer, depending on what the scans turn up when AD gets reevaluated.) That any return this season is possible seems like a pretty good one, considering Davis said he “heard something pop” when Minnesota forward Jaden McDaniels fell into his leg. And maybe having some time off to rehab and rejuvenate will ultimately benefit Davis, who was averaging more minutes per game than he has since 2017-18 and just under  38 minutes per contest in his last 10 appearances before going down, allowing him to come back fresh for the stretch run as the Lakers look to peak heading into the postseason.

They’ll have to get there first, though. And given both Davis’s absence and  what we’ve seen from L.A. so far this season—a 16-15 record heading into Tuesday’s game against the West-leading Suns, a bottom-10 efficiency differential, and the NBA’s sixth-worst offense—that proposition is getting dicier by the day. As much respect as the LeBron-AD combo deserves and gets, and as much as the Lakers have shown glimpses of being a good team  when healthy, they haven’t really been good or healthy for most of this season. The lack of margin for error created by that underwhelming early start might catch up to them: The predictive models at FiveThirtyEight, Basketball-Reference, and ESPN’s Basketball Power Index all now project them to finish below .500, making the playoffs in fewer   than 50 percent of their simulations. Inpredictable and PlayoffStatus are     more bullish, giving L.A. better than 75 percent odds of reaching the    postseason. But even they see it as far less likely that LeBron and Co. finish in the top six than as a seventh, eighth, ninth, or 10th seed, needing to scrap it out in the play-in tournament.

With Davis finally on board, there is no doubt that the Lakers are now a more difficult team to handle on both ends of the floor. As of now, the Lakers are sporting a record of 24 wins against 24 defeats, which is still good for the 8th spot in the Western Conference standings.

The Lakers are currently on a very tough road trip in the East Coast, but has lost one — a 113-107 defeat at the hands of Jimmy Butler, Bam Adebayo, Duncan Robinson, P.J. Tucker and the Miami Heat. They will close out their road trip when they go up against the Philadelphia 76ers, the Charlotte Hornets, and the Atlanta Hawks.