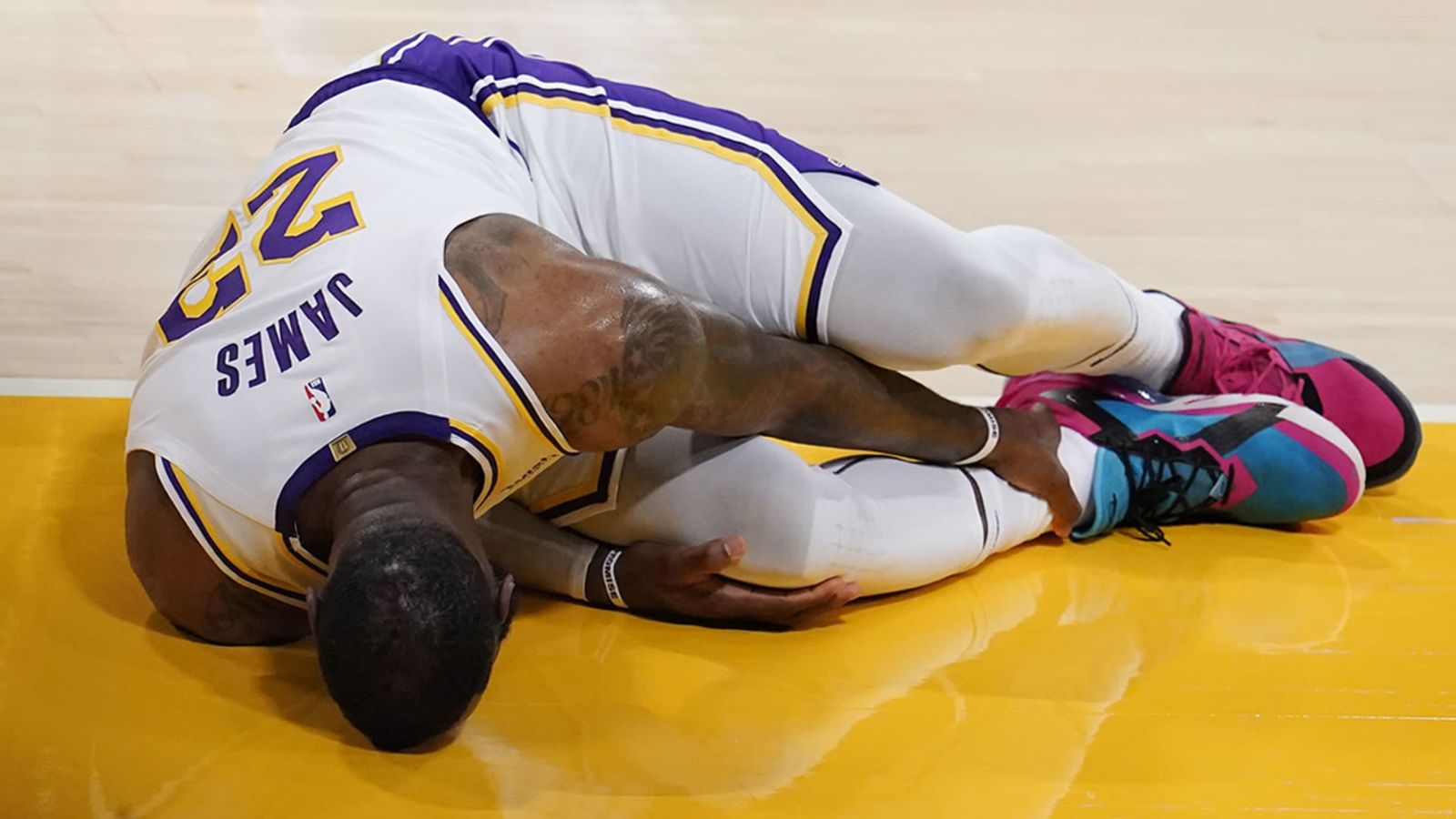 LeBron now out indefinitely due to ankle injury

The defending champs Los Angeles Lakers continue to be hit with an unfortunate injury plague. The latest to be hit with this setback is four-time Most Valuable Player and last year’s Finals MVP LeBron James. James suffered an ankle injury after Atlanta Hawks veteran forward Solomon Hill collided into him.

As a result of that collision, James sustained an injury that was found to be on the high ankle upon diagnosis. The King only logged in 10 minutes in that loss to the Hawks, tallying 10 points, 4 assists, 1 rebounds and 1 turnover. The Lakers went on to lose that game on a five-point decider, ending their four-game winning streak.

ESPN Senior Writer Kevin Pelton recently wrote a column as he detailed out the effects of this LeBron injury to the Lakers’ goals this season. Pelton pointed out that it is still difficult to come up with an exact timetable for the superstar forward’s return, but emphasized that LeBron has always shown a great resistance against sustaining ankle injuries.

Of course, we also have to keep in mind that LeBron’s age may be catching up on him in terms of recovering from this kind of injuries. His 36 years of age may not show yet on the court, but it could be a different thing in completing a full injury recovery.

Without more details about the severity of James' high ankle sprain, it's tough to pinpoint exactly how long he might be out. When Jeff Stotts of  InStreetClothes.com wrote about the history of the injury during the 2018 NBA Finals, he noted that the typical high ankle sprain resulted in players missing 10 games. However, the player he was writing about - - Golden State Warriors All-Star Klay Thompson -- didn't miss a single game, playing after two days of rest between suffering the injury in Game 1 and the subsequent Game 3.

James' initial attempt to remain on the court after the injury (he even made a 3-pointer on the next possession) recalled his strong track record of playing through more common ankle sprains, which involve a different group of ligaments. As Stotts noted on Twitter on Saturday, his database showed James missing just three games total with eight previous ankle   sprains. In this case, there's reason for the Lakers to be more cautions with James' health -- certainly as compared to Thompson's desire to rush back during the NBA Finals. Where the Lakers finish in the Western Conference standings is less important than having their stars healthy for the postseason.

This is indeed an unfortunate setback for the Lakers, especially with how great of a season LeBron is putting up this year. The 17-time All-Star forward is currently tallying impressive numbers of 25.4 points, 7.3 rebounds, 7.9 assists, 1.0 steals and 0.6 blocks this season.

James has also been dialling it up from beyond the arc for the Lakers this year. He is producing a decent 36% clip from the three-point line, but he did put up quite a stellar show from deep during the early stages of the season. That outstanding streak helped James gain much-needed confidence, along with the fact that opposing teams’ defenders now respect his three-point shooting.

There is no doubt that James is again putting up a performance worthy of an MVP award. As per Dave McMenamin of ESPN, James himself believes that he should have won more MVP trophies than the four plums that were awarded to him throughout his productive career.

James won his first two MVP awards with the Cleveland Cavaliers in 2009 and 2010. He then followed it up with two more during his time with the Miami Heat (2012, 2013). However, James reiterated that he won’t dwell on not winning the award, but that he will always go out there to be “recognized as the best player.”

"I should have more than four, I believe," James said. "But ... I don't sit around thinking about it or crying about it, or whatever the case may be. I just try to come in the next season and be the MVP and be talked about [for] it again. I bet a lot of the greatest that played this game feel like they should have more as well, if you ask any one of those guys.

"This is another opportunity for me to able to be recognized as the best player for that particular season, and this season. So, hopefully, I can continue to just play great basketball and see what happens at the end."

But on top of crossing out LeBron’s excellent momentum this season, it is also true that the Lakers are piling up one injury after the other. Their current injury report now includes James, superstar big man Anthony Davis, veteran center Marc Gasol, and veteran role player Jared Dudley.

To make matters worse, the Lakers have already dipped in the Western Conference standings. They are now sporting a record of 28 wins against 14 defeats, which is only good for the third seed in the stacked conference. Currently, it is the Utah Jazz who is on top with a record of 30 wins against 11 defeats, while Chris Paul and the Phoenix Suns come second with their impressive win-loss slate of 27 wins against 13 defeats.

For sure, the Lakers will be able to book a playoff ticket this season. But the concern is on the chemistry of the team moving forward. They have been without Davis for several weeks now, and this recent James injury could further impede their progress. With these things in mind, should the Lakers then get some more help from the outside?

Pelton said that it is possible for the Lakers to get into trade negotiations before the March 25 deadline in an obvious effort to add more depth to their roster. However, Pelton also points out that the Lakers currently do not have much assets to entice other teams in trade negotiations, which means that the defending champs could be more interested in signing potential buyout candidates this season.

The Lakers' efforts to add to their roster via trade are complicated by being subject to a hard cap at the luxury-tax apron because they used their non-taxpayer midlevel exception to sign Harrell as a free agent. The Lakers can add up to about $1.7 million in salary, at most, in a trade and have to weigh doing so against the possibility of using that money to     sign free agents on the buyout market. It is possible for the Lakers to take back a larger salary by including their current players in a trade. For example, a package of Wesley Matthews ($3.6 million) and Alfonzo McKinnie ($1.8 million) would allow the Lakers to bring back a player making around $6 million after factoring in the need to sign two players to fill out the roster. (The Lakers currently have two open roster spots  after the expiration of the second 10-day contract for Damian Jones, who has been starting for them at center.)

The other complication for the Lakers is that they don't have much to offer in a trade. The only first-round pick the Lakers can deal is in 2027, and their nearest second-round pick comes in 2023. Realistically, the Lakers probably don't have the ability to add the kind of player who would really help them manage the absence of Davis and James. The Lakers' in-season additions are more likely to come via buyouts.

If the Lakers then pursue an avenue for buyout candidates, a name that comes to mind would be Andre Drummond from the Cleveland Cavaliers. Drummond has logged in only 25 games for the Cavaliers this season, while putting up 17.5 points, 13.5 rebounds, 2.6 assists, 1.6 steals and 1.2 blocks per contest.

However, both Drummond and the Cavaliers organization seem to come into terms that the big man will not have a future in Cleveland. Drummond, who is now 27 years of age, last played on February 12 in which they lost to Damian Lillard and the Portland Trail Blazers.