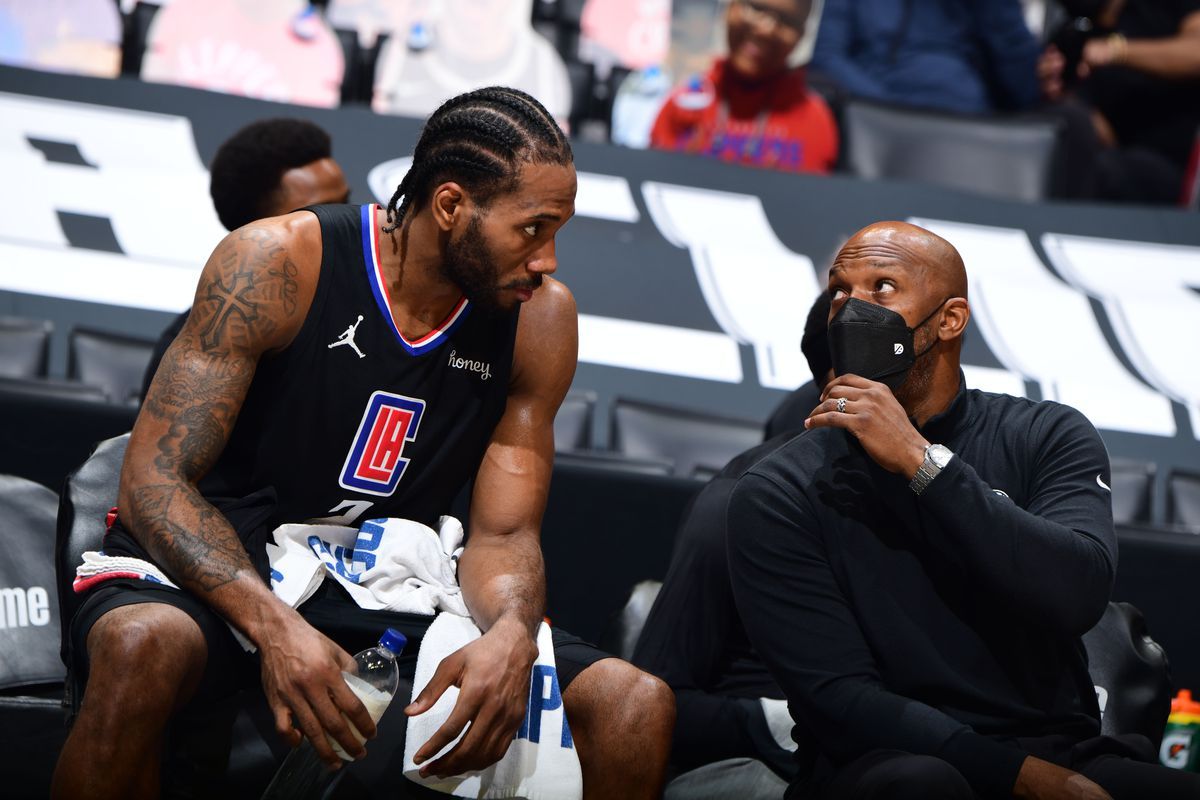 Clippers yet to know timetable for Kawhi’s return

Los Angeles Clippers superstar Kawhi Leonard is currently recovering from an ACL injury, but the bad news is that there is still no exact timetable as to when the All-Star forward will fully recover from the injury and return to the hard court. As per an article written by Ohm Youngmisuk of the ESPN, the Clippers pointed out that Leonard is coming off a “significant rehab”, but that it is still up in the air if he can still return to the Clippers’ active lineup this upcoming 2021-22 NBA Season.

Clippers president of basketball operations Lawrence Frank was positive that Leonard is currently making progress in his rehab from the ACL injury, but he dodged questions as for the topic of when Kawhi can make his return to the active lineup. It could be remembered that the former two-time Finals Most Valuable Player played only 11 of the Clippers’ 19 games in the recent 2021 NBA Playoffs, and sat out the entirety of the team’s matchup against Chris Paul, Devin Booker, Deandre Ayton and the Phoenix Suns in the 2021 NBA Western Conference Finals.

Frank said that even though Leonard has a “very detailed plan” with the team’s group of medical experts and physical trainers, he also pointed out that predicting the exact timetable for a return from a major ACL injury is always a tricky business. He said that the Clippers organization will take the Kawhi recovery one day at a time, while also chiming in his thoughts on the issue of full vaccination among all players, coaches, and other staff members.

"Oh, we don't even breach that," Frank, the Clippers' president of basketball operations, said when asked if he anticipates Leonard playing this season. "I think at this point, it's just no one knows when you're dealing with a recovery from an ACL [injury], the time frame. Even just to save you guys [from asking] throughout the year, is no one knows. You just attack it day by day. He has a very detailed plan with a great group, and we'll just let his body and the doctors tell us when it's the right time.

Personally, I'm a huge advocate of the vaccinations. I believe in the science and believe in the evidence as a personal viewpoint," Frank  said. "But in regard to speaking on behalf of players or staff, I'm not comfortable sharing that type of information other than personally, what my beliefs are and what we spread and what we educate everyone in the organization. But ultimately, that's not my news to share."

Leonard, who will be entering his third year with the Clippers in the upcoming season, is coming off another productive stint in the 2020-21 NBA season in which he put up a tremendous all-around stat line of 30.4 points, 7.7 rebounds, 4.4 assists, 2.1 steals, and 0.8 blocks per contest. He also shot a good set of shooting percentages, including a career-best 57% overall clip from the field, an outstanding 39% clip from the three-point line, and an excellent 88% clip from the free throw line.

Leonard joined the Clippers squad in the summer of 2019, right after he won his second career NBA championship with the Toronto Raptors during the 2018-19 NBA season. Before he suited up with the Raptors, the 6-foot-7 two-way player played the first six years of his career with the San Antonio Spurs. He was not at all very much hyped during his rookie year, but he immediately showed that he can be an excellent player on the defensive end of the floor.

His playing time under Spurs head coach Gregg Popovich would immediately grow in his second year in the league, and he broke out of his shell with a dynamic performance in the 2014 NBA Finals. Leonard was the primary defender against Miami Heat superstar LeBron James, and he also showed out with an equally excellent display on the offensive end of the floor. His brilliance in that series helped the Spurs snatch away the championship trophy, and he was also rewarded with his first Finals MVP plum.

However, Leonard’s relationship with the Spurs front office and coaching staff would turn sour when he suffered two injury-riddled seasons from the 2015-16 NBA season and the 2016-17 NBA season. He only played a total of 22 games in that two-year span, and it became apparent that he has not had productive conversations with the Spurs management anymore. That unfortunate turn of events paved the way for him to be shipped to the Raptors in the summer of 2018 in a deal that also saw long-tenured Raptors star shooting guard DeMar DeRozan move to the Spurs.

But now that he is with the Clippers, it is most assuredly that he is with a team that is very dedicated to winning it all. As per a column written by Ramona Shelburne for the ESPN, Clippers chairman Steve Ballmer assured everyone that the Clippers’ announcement of the groundbreaking of their new arena means that they are serious in their pursuit of forging their own identity in the league and leaving the shadow of the more popular Los Angeles Lakers.

"We needed to say, 'We're our own guys. We don't play in the same place as the other guys. We're going to have our own identity. I've never been in a place where you had two teams in a town. I grew up in Detroit. Everybody's a Pistons fan. And I think for enough years the Clippers were bad enough, everybody could just ignore the Clippers. We're good now, and we're going to be good year in and year out. We're going to build our own building, more of our own identity, more of our own personality. And I think some of the fans on the other side, if you  will, it's like, 'What? You dare to question our supremacy?' No, we do.

There's 30 teams in the league. There's 29 others. And we got one that  happens to be based in L.A. And we got our fans. We use our expression, 'LA Our Way.' And we're building our own presence, identity. And if the other guys feel a little threatened -- the other guys' fans, I mean; the players are actually a little different deal -- but if they feel a little threatened, that's OK. It means we're doing good. Every year I want to win. Some people will talk about 'We're taking a step back' or 'We got an injured year.' No. Our fans can count on the fact that we are going to try to win as many ballgames as we can every year. Now, we took a little setback. We got to get Kawhi healthy. And when he's back, we're back at full strength."

Of course, winning it all will not come easy for the Clippers. Along with the unpredictability of Leonard’s injury, it is also true that the Western Conference has a lot of powerhouse teams aiming to make a play for the championship next season. The Lakers have acquired another star in Russell Westbrook to pair with superstars LeBron James and Anthony Davis, while the star trio of Mike Conley, Donovan Mitchell, and Rudy Gobert makes the Utah Jazz a deadly threat in the conference.

On top of that, the return of Jamal Murray will again pair him up with reigning Most Valuable Player Nikola Jokic in the Denver Nuggets camp, and the impending return of Klay Thompson will complete his Splash Brothers tandem with Stephen Curry and make Draymond Green and the rest of the Golden State Warriors a serious title contender in the West. We are not even mentioning the fact that Paul, Booker, Ayton and the reigning Western Conference champions Phoenix Suns are also part of the equation.

With Leonard sitting out probably most of the upcoming season, it is expected that his co-star Paul George will take the lion’s share of the workload not just on offense, but also on the defensive end of the floor. George, who also played for the Indiana Pacers and the Oklahoma City Thunder, joined forces with Leonard at the same time that the latter signed with the Clippers.

George, who is a seven-time All-Star and the steals leader during the 2018-19 NBA season, is coming off a productive season with the Clippers in which he was able to put up an excellent stat line of 23.3 points, 6.6 rebounds, 5.2 assists, 1.1 steals, and 0.4 blocks per contest. George also normed an efficient set of shooting percentages, including a career-best 47% overall clip from the field, an outstanding 41% clip from beyond the arc, and an excellent 87% clip from the free throw line. As Frank also pointed out, he said that he is very sure that George is “looking forward to the challenge”, and that he is assured that George can definitely carry a heavier workload in the upcoming NBA season.

“I think he’s looking forward to the challenge. He’s been in this position before, in other places, probably more Indiana than Oklahoma City. But I think Paul has shown throughout his career that he’s more than capable to rise to the challenge. And I think as a competitor, obviously you’d love for Kawhi to be there from day one, but we also understand what we’re dealing with and he’s looking forward to it.

He was a heavy load carrier, so you know they were like, ‘Paul, you got to take a little time off,’ and then he got right back in the lab. So with the work he does with both our coaching staff and his trainer, he’s right  back at it. I think he addressed, and we sit down every post, after the year, and go through, we target three to four different things with each player to focus on. And I think Paul has attacked that just like he attacked some different areas last offseason. I think with his body, he’s  put a lot of time, effort into his body. And so we fully expect Paul to continue to be one of the best players in the world and to do whatever it takes to help the team win.”