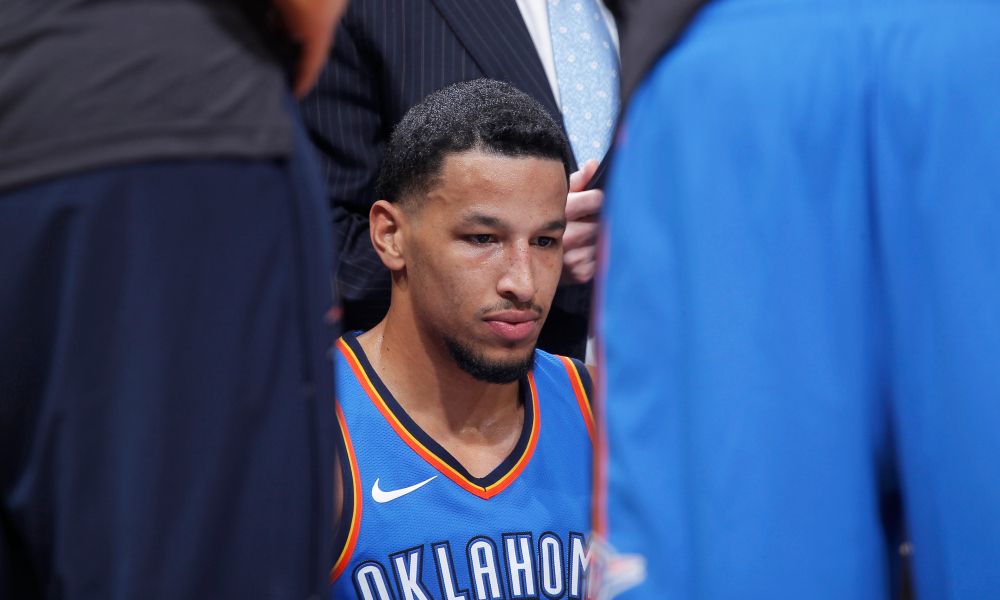 After already missing two years, Andre Roberson can make his long-awaited comeback when NBA commissioner Adam Silver decides to resume the currently-suspended season. The 6-foot-7 defensive-minded small forward has been missing in action since rupturing his left patellar tendon in a game against the Detroit Pistons dating back to January 2018.

Since then, Roberson has had some setbacks that prolonged the timeline of his recovery. Maddie Lee of The Oklahoman reported last December that the forward sustained an “avulsion fracture” in his left knee, a very unfortunate issue that hampered his plans to finally make his return this season.

Thunder big man Steven Adams, a long-time teammate of Roberson in OKC, expressed his remorse on how this setback has been saddening for Roberson and for the whole organization.

“It’s probably pretty s--- to be in that sort of situation. He wants to come out here and play … . Anyone in that situation is not going to be positive. It’s quite frustrating,especially for him, the duration that it’s been, it’s very frustrating. And it’s frustrating for everyone around here. Obviously, we support him and stuff, but it’s just like,‘Damn, man, that’s just so unlucky.’”

On top of that, Roberson’s current contract with the Thunder will expire after this year. He signed a three-year, $30 million deal in the summer of 2017, so it’s safe to say that Roberson has not completely fulfilled his end of that lucrative contract. But with the season suspended, there is a chance that the NBA will end the regular season games and push through with the playoffs once doctors and medical figures give the green light for the league to play basketball games.

With that said, the Thunder are sporting a 40-24 record while sitting on the 5thspot in the Western Conference. When they traded away their long-tenured superstar in Russell Westbrook, many people expected that the Thunder front office will look to rebuild their roster. They also shipped star forward Paul George to the Los Angeles Clippers, and got a young excellent player in Shai Gilgeous-Alexander. With a young point guard slated to be the future cornerstone of the franchise, it was also highly-anticipated that they will then ship Chris Paul, the veteran All-Star they received from the Houston Rockets.

However, Paul’s very hefty contract proved to be very difficult to trade, and that ultimately became a blessing in disguise for the Thunder. Behind the leadership of Paul, the scoring of Dennis Schroder and the all-around versatility of Gilgeous-Alexander, they now have three outstanding point guards who have different skill sets. Veteran players like Adams and Danilo Gallinari continue to be effective, and the young guns in their second unit provide the needed energy and hustle off the bench.

Yet, Roberson’s return would give them a piece that their puzzle has been missing all season long: a proven defender who play both forward positions, lock down opposing team’s best players and serve as an anchor for their defense. Right now, Terrance Ferguson is holding the fort on that role but Roberson is still the best defender that they have on their line-up.

So it is really a welcome sight for the Thunder when they see their best defensive player finally suit up on the court. As per The Oklahoman’s Joe Mussatto, Roberson views the games’ suspension as a blessing in disguise, while also revealing that he is already done with the rehab stage of his recovery. The 28-year old forward is now looking forward to being acclimated to the game speed and getting the feel of a competitive game.

“It’s a blessing in disguise because it’s given me more time to continue to work on me. But it’s also kind of taken away because I need other people to play against, to get a feel for the court, play five on five again and obviously get back into plays and stuff like that.

I’m kinda past the rehab stage. I’m almost to the point where I should be cleared, honestly. Still taking it a day at a time until I get back into our medical staffs’ hands and get re-evaluated. So just staying patient through it all knowing that the light is right there at the end of the tunnel. It’s definitely been a long journey and, you know, coming to an end.”

Should Roberson indeed makes his return to the Thunder in the playoffs, he could work his way towards a starting role. The Utah Jazz are sitting on the 4thseed of the conference, so defending star shooting guard Donovan Mitchell will be Roberson’s primary assignment. He would take some minutes off Gallinari, Ferguson, Hamidou Diallo, and Luguentz Dort if he is healthy enough to come back.

But if the NBA decides to cancel the season, earning another big payday might be difficult for Roberson. His long history of injuries would be a risk that a team has to take, not to mention the weaknesses that he has in his game. Roberson is still a terrible three-point shooter as his very limited offensive arsenal continues to be a liability for his team.

Two-time Most Valuable Player of the Year and three-time champion Stephen Curry has admitted that he was the first NBA player who took a test to see if he is positive for the COVID-19 virus. Although he fortunately tested negative, Curry said that it was still an anxious time for him, his family and his teammates. In a heartfelt article that he penned for the Time, Curry emphasized that the fever he had last March 6 made him decide to receive a test for the virus.

“March 6. That’s when it all became very real. I had just played my first basketball game in months the night before, and conversations were swirling about what this virus might mean for the league. That night, I started to feel sick. The fever set in. First at 100. Then 101. My first thought was, “What are the chances? Could this really happen?” After months of waiting to get back on the court following a broken hand and two surgeries, I just wanted to play. But the threat of this mystery virus locked me in my bedroom to protect everyone I cared about: wife, kids, teammates, fans.

I was the first NBA player tested for COVID-19. Thankfully, my test came back negative. But that experience hit me, and it hit me hard.”

It was indeed an anxious moment not just for Curry and the people close to him, but also for Warriors fans and the whole basketball community. After missing three months due to a hand injury, Curry finally made his return last March 5 against the defending champions Toronto Raptors. The 32-year old star put up an all-around performance of 23 points, 6 rebounds and 7 assists, while making three triples and hitting all eight of his free throw attempts. It was safe to say that Curry was very comfortable in his first game back, as he just turned the ball over once and did not show any rust in terms of his movement and scoring.

However, the Warriors would then announce that the All-Star point guard will not play in their next game due to a seasonal flu. This was a very concerning setback as the number of people who tested positive for the COVID-19 around the world was drastically increasing. It would turn out that Curry didn’t have the virus, but by the time that he has recovered from the fever, the NBA has already suspended the season.

As for Curry, he and his wife, Ayesha, are working hard to feed families in Oakland whose income has taken a very big hit due to the lockdown and stoppage of work and businesses in the country. In the same column that he wrote, Curry encouraged all his readers to have the initiative to reach out and help people who are in dire need these days.

“We have a unique opportunity to come together, to bridge humanity; and the future of our world depends on what you do next. Whether it’s giving blood, donating to your local food bank, checking in on your elderly neighbors or just staying home, our small gestures in times of crisis can end up being the big gestures that made the difference.”

As for the NBA, it will be a couple of months more before we even receive an update when the games will resume. The tally of people who are testing positive for the virus is still increasing, and it remains to be seen when and how the curve will finally be flattened.