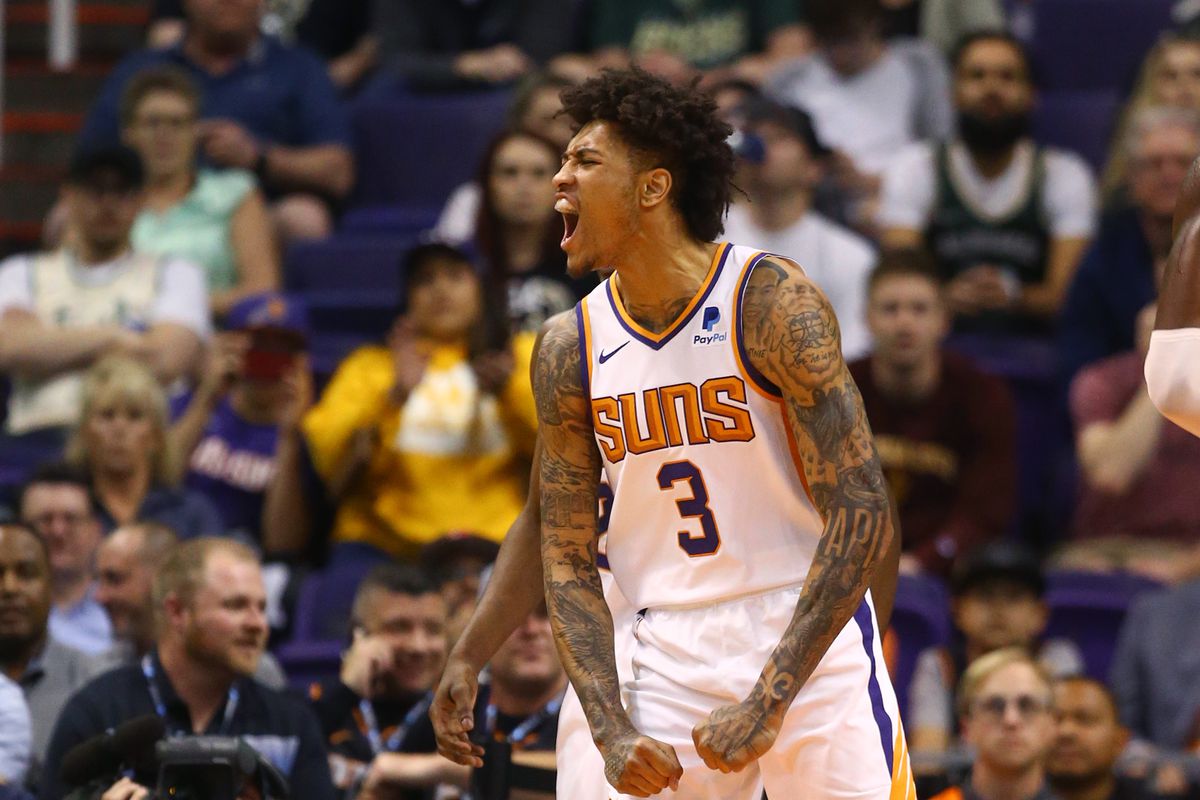 The Suns have lost their best small forward in the middle of their chase for a coveted playoff spot in the Western Conference. It has now been announced that Kelly Oubre Jr has went through an arthroscopic surgery to repair the torn meniscus he sustained in his right knee. The timetable for his recovery will be at least four weeks, and then he will be re-evaluated after that given time span.

The lefty budding star has sat out the last four games after suffering the injury during the team’s 20-point victory over the Utah Jazz last February 24. There was not an obvious instance in that game when Oubre injured his knee, making it difficult for the team to gauge the severity of his injury right after the win. But as per Kevin Zimmerman of the Arizona Sports, team general manager James Jones detailed how Oubre got hurt.

“You can see it. If you go back and watch, the play was I believe he attacked the rim from the right side over Rudy and he missed a dunk. And then maybe a possession or two later, he’s in transition, he goes up down the left side for a dunk and as he’s up, Rudy taps his hip and it propels him a little bit forward, and so rather than hanging on the rim and coming down on his toes, he kind of comes down on his heel and that’s the point you can see he took a shot to his meniscus and it resulted in an injury.

You can see him wince a little bit. He continued to play on it because he plays through everything. Eventually we realized it was a … tear and he had to get it fixed.”

This is indeed an unfortunate setback for the team as Oubre is producing a career-best season so far. The 24-year old swingman is posting career-highs of 18.7 points, 6.4 rebounds and 1.3 steals per game, while also averaging a career-best 35% clip from the three-point line. More known as a headcase during his tenure with the Washington Wizards in the first three years of his career, Oubre has blossomed into a more consistent role for the Suns since being traded last season. Not only did he develop a more complete package in his offense, but he has also took on the challenge of defending the opposing teams’ best players.

With Oubre being sidelined for at least a month, this will be a huge blow for the Suns’ playoff hopes. They are sporting a 25-38 record, and are still six games below the 8th-seeded Memphis Grizzlies. The good thing for this team is that they are not new to enduring long absences from their key cogs. Starting big man Deandre Ayton went on a 25-game suspension this season for violating the league’s anti-drug policies.

Although they have went on tough, long stretches of losing skids, the Suns have been resilient all season long. During a sitdown with the Doug & Wolf show on 98.7 FM Arizona’s Sports Station, Phoenix first-year head coach Monty Williams reiterated that Oubre’s absence will give the team’s other players to step up big time.

“Unfortunately Kelly most likely won’t be with us for a while. We’re fine. We’ve dealt with it before, with guys being out. Our guys are continuing to grow and play with a great level of intensity.

It’s an obvious blow to the team, but it’s a great opportunity for Mikal (Bridges) and  Cam (Johnson) to step in there. Dario (Saric) will play more minutes.”

With a crucial win against Damian Lillard and the Portland Trail Blazers, the Suns have snapped a recent four-game losing streak. But the road will get bumpier from this point forward as they have a tough stretch of games ahead. They will go back to work when they face the Milwaukee Bucks on Sunday, followed by a road rematch with the Blazers and a date with Luka Doncic and the Dallas Mavericks.

The Grizzlies’ impressive sophomore combo big man could return from an injury layoff as early as next week. After suffering a left knee sprain during a loss at the hands of the Los Angeles Lakers last February 21, Jaren Jackson Jr has yet to appear in another game for the 8th-seeded Grizzlies. Jackson only managed to log in sixteen minutes in that game before exiting early with the injury. The team announced that it will take a couple of weeks before Jackson will be re-evaluated.

Now, it is reported that the young power forward is slated for an upcoming return. Michael Wallace of the Grind City Media tweeted out that head coach Taylor Jenkins has confirmed plans on bringing back Jackson next week. Jenkins emphasized that his young gun has already been re-evaluated and there hasn’t been any setback to his recovery process so far.

“As @jarenjacksonjr (Jackson) pushed through court workout before tonight's @memgrizz (Grizzlies) game at @BrooklynNets (Brooklyn), Jenkins confirms Jackson's recovery "is progressing in a positive direction." Jenkins says Jackson return from knee sprain may be as soon as next week, based on reevaluation results.”

Right after Jackson went down in that Lakers game, the Grizzlies would immediately feel the effects of his absence as they lost all three of their next match-ups. They were able to make up for it and adjust with a morale-boosting victory over the Lakers, followed by two massive beatings of the Atlanta Hawks and the Nets. With a 31-32 record this season, the Grizzlies have surprised a lot of people by positioning themselves for the playoffs. They are 3.5 games ahead of the 9th-seeded Blazers and the Sacramento Kings.

Indeed, Jackson has been very instrumental for the surprising run of this young Grizzlies squad. The 20-year old is averaging 16.9 points, 4.7 boards and 1.6 blocks per contest, including a stellar 39% clip from beyond the arc. His partnership with rookie point guard Ja Morant has been one of the most exciting things to see in the NBA this year.

As the Grizzlies do everything they can to maintain their playoff spot in the stacked Western Conference, it still boils down to how resilient and motivated this team is. They actually started the season on the wrong foot, netting a lowly 6-16 record to start their campaign. But this is a young team on the verge of development and maturity, something that has been very evident in their sudden rise in the standings.

As per Dime’s Bill Difilippo, Jackson emphasized that the team has been indulging on a lot of film sessions as they vigorously study the game more.

“I didn’t even realize we were 6-16. Everything gets better with time, the chemistry just got better, we meshed better, we had better practices. When you’re able to do all that, everything kinda lined up and, yeah. Film, big key, film, man. We watched so much film, so we were able to see a lot of the mistakes we were making. And our staple is defense, so when our started getting better, our offense was kicking ass … did I just say kicking ass? Good god, it’s been a long day.”

With Jackson set for a probable return to next week, it will be a big boost for the Memphis’ depleted frontcourt. Along with Jackson, back-up forward Brandon Clarke is also down with an injury on his right quad. In just his first season as a pro, Clarke has assumed an important role off the bench, norming decent numbers of 12.0 points, 5.8 rebounds and an excellent 62% overall clip from the field. The team is also without the services of small forwards Grayson Allen and the recently-acquired versatile defender Justise Winslow.

Following a tough 26-point loss at the hands of the Mavericks, the Grizzlies will face the Orlando Magic on Tuesday then end their week with games against the Blazers and the Utah Jazz. In their remaining 19 games, 12 of those will be against currently playoff-positioned teams. That does not include two more important match-ups with the New Orleans Pelicans and the Blazers.