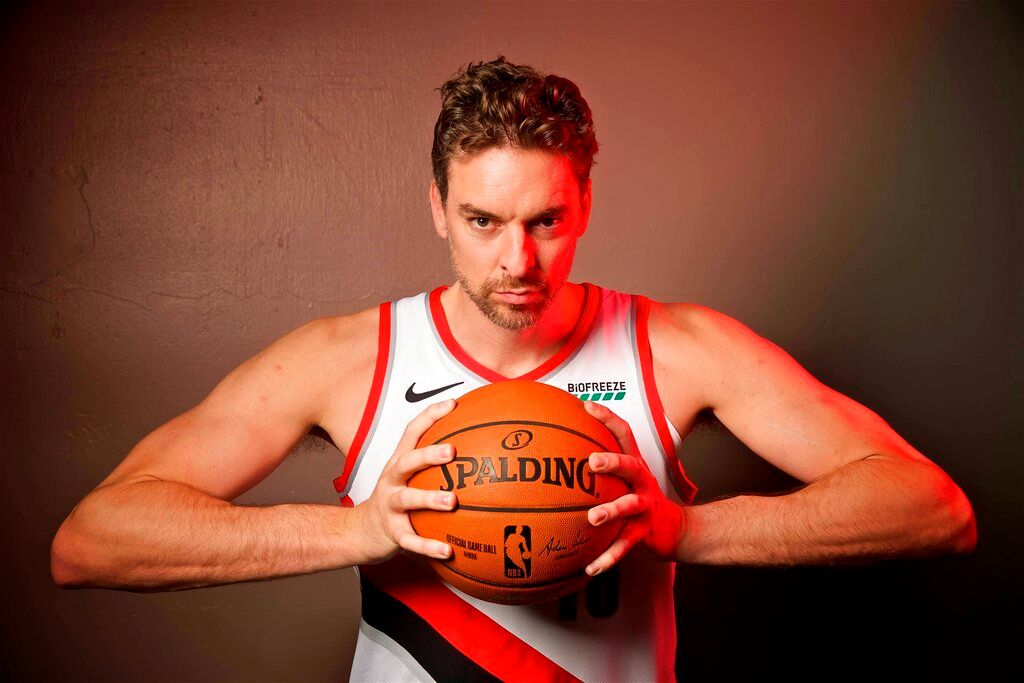 Could we seen another great European big man retire from the NBA? Last season, Dallas Mavericks legend Dirk Nowitzki announced his retirement from the league. Now, we might see another future Hall of Famer go as Pau Gasol has been released by the Blazers following an unsuccessful recovery from a left foot surgery he went through last May. In a heartfelt statement that he posted on his Instagram account, Gasol announced that he will be leaving the Blazers organization to prioritize his rehabilitation process.

“As of today, I will no longer be a member of the Portland Trail Blazers players roster. The injury that I’ve been dealing with and for which I underwent surgery last May can take anywhere from six to 12 months to heal completely.

I underwent surgery in hopes that it would expedite my return. But unfortunately in  the last few days we have assessed that my recovery is going to take longer than originally hoped for.”

This development surprised a lot of people, but not the ones inside the Blazers franchise. When they signed the two-time NBA champion to a one-year deal last summer, they already had an agreement that the team has the right to waive him if he doesn’t make significant progress in his recovery. Unfortunately, Gasol will need more time to recover and might not be fully healthy to come back this season.

As per Marca’s Jesus Sanchez, Gasol is now in his home country Spain to assess his options for his recovery process. Of course, it is more difficult for the Spaniard to heal his body now that he is already 39 years old. Still, the international star has made it clear that he is not retiring from playing basketball just yet. Gasol reiterated that he is taking a serious approach on his rehab so that he could return to the court.

"I have the same excitement and passion for the game of basketball that I had when I  first started playing. And I will work as hard as I can on my recovery with a clear goal in mind: to get healthy in order to play the game that I love."

Whether his return will be with an NBA team or with a European basketball club, Gasol’s comeback will be welcomed by basketball fans all over the world. He could still be a key cog off the bench for any team in the NBA, but it’s intriguing if there is a chance that he changes course and spend the last years of his playing career at his home country. As per Lluis Canut of Catalan website ESports, Barcelona is mulling an offer to Gasol should he consider the possibility of playing in the EuroLeague. Barcelona has just acquired former NBA cager Nikola Mirotic this summer, a sweet-shooting big man who also hails from Spain.

It remains to be seen how Gasol will decide on his basketball venture, but how great it would be if the Spaniard legend ends his decorated career in front of his very supportive countrymen.

The injury bug just continues to bite for the already-depleted Magic squad. Just a week after losing All-Star center Nikola Vucevic to a severe ankle injury, the team announced that combo forward Al-Farouq Aminu has sustained a torn meniscus injury on his right knee. Here’s the team’s official statement on this recent unfortunate setback.

“Orlando Magic forward Al-Farouq Aminu underwent an MRI on his right knee which has revealed a torn meniscus.

Aminu will undergo further evaluation which will determine treatment options and the length of time he will be sidelined.”

Aminu, who was signed by the Magic to a three-year, $29 million contract just last summer, is averaging 4.3 points, 4.8 rebounds, 1.2 assists and 1.0 steals per contest this season. There’s no question that the 29-year old forward is having a down year in terms of his production. His scoring average this season is the lowest of his career, a direct effect of a decline in his playing time. Aminu is just playing 21.1 minutes per contest for the Magic, his lowest since the 2014-15 season.

Of course, he is battling for minutes against the Magic’s bevy of good, talented forwards. Young combo forwards like Jonathan Isaac and Aaron Gordon are ahead of him in the rotation. The fact that Isaac and Gordon are both young assets could mean that the Magic is more bent on developing them for the future. Moreover, Aminu is just posting a lowly 8.0 player efficiency rating this season, a possible indicator that Orlando’s system may not be a right fit for his unique all-around skill set.

Still, he and the Magic didn’t really anticipate big minutes for him when they agreed to a deal last offseason. Aminu is more of a quality reserve in case either Gordon or Isaac get injured. Take note that Isaac has been plagued by injuries throughout his young career, so it’s understandable that the Magic front office looked at Aminu as a safety net. He is a proven unselfish player who can generate the offense and play well on defense. Magic head coach Steve Clifford says that the team will certainly feel Aminu’s absence on the defensive end, per Zach Oliver of the SB Nation’s Orlando Pinstriped Post.

“He just gives us such good size at the position, he’s a good defender. He’s a proven   veteran player. We’ll miss him for sure.”

Aminu’s absence should mean more minutes for small forward Wesley Iwundu and big man tweener Mo Bamba. The Magic will travel to Washington to face Bradley Beal and the Wizards in their next assignment.

Prized rookie point guard Ja Morant will be on the Grizzlies’ injury list and is considered “week-to-week” after hurting his back in a freak collision with a baseline cameraman in a Friday night game against the Utah Jazz. It could be remembered that the amazing rook already had problems with his back earlier in the season that forced him to miss a couple of games.

Here is the team’s official statement on Morant’s injury status:

“In last night’s game against the Utah Jazz, Morant aggravated back spasms which first occurred against the Indiana Pacers on Monday night. Morant did not travel  with the team to Minnesota and is considered week-to-week, as a period of short-term off-loading is needed. Further updates will be provided as appropriate.”

Although he did return in that game, further assessments after the contest could have tilted the decision for him to rest and completely heal his back injury. The 20-year old rookie phenom is currently on top of the Rookie of the Year race as he is posting stellar averages of 18.6 points, 3.2 rebounds, 6.4 assists and 1.4 steals per game. Morant’s basketball IQ and fearlessness to drive to the rim have been topnotch among the current rookies. Even Clippers veteran head coach Doc Rivers heaped praises for the 6-foot-3 speedy playmaker, as per David Cobb of the Memphis Commercial Appeal.

"He's lightning quick, he's got great vision. To me, that's the part that I like the most about him is his toughness and his vision."

With Morant’s return still needing an exact date, the Grizzlies will rely on back-up point guard Tyus Jones to man the primary playmaking position. All-around small forward Kyle Anderson can also handle the playmaking duties, as well as shooting guard Dillon Brooks. After the Timberwolves game, the Grizzlies will then go up against the Pacers in an opportunity to extract revenge following their 126-114 loss in their first match-up.