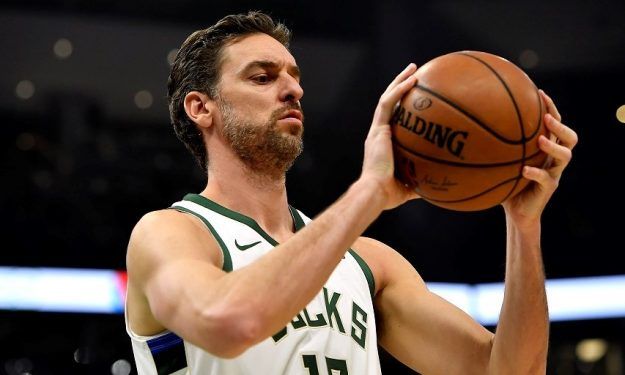 We have been seeing less and less of Pau Gasol in the last couple of years, but it was this season that he finally took a well-deserved break to focus on his injury rehab and spend more quality time with his family. Many people thought that he could be pondering retirement, especially how little playing time has he has garnered at the tail end of his very productive career.

Gasol, who will be turning 40 years old this July, played only 30 games last season and logged in a career-low 12.0 minutes per contest. After successfully negotiating a buy-out with the San Antonio Spurs, the veteran big man signed with the Milwaukee Bucks to help young superstar Giannis Antetokoumpo and the Milwaukee Bucks to prove their mettle against the elites in the Eastern Conference. However, Gasol injured his left ankle, ending his Bucks stint after only appearing in three games.

Still, the two-time NBA champion isn’t bent on hanging up his sneakers just yet. In fact, Gasol reiterated his desire to suit up for Spain for the last time and play in his fifth Olympics stint. But the widespread coronavirus outbreak forced the Olympic committee to postpone the Tokyo Olympics until the summer of 2021. As per the Olympic Channel, Gasol isn’t scratching off his plans but admitted that playing at a high-level against elite international teams would be a challenge as he will already be 41 years old by that time.

“I was hoping, before everything changed and everything got postponed or cancelled, that I was going to have enough time to heal my injury, to get in the appropriate shape after more than year, if not, of being able to compete and play and still, at 40 years old, play my fifth Olympics this summer in Tokyo. Now, for one side, I have more time to recover, but I will have to play competitively in order to get to the summer of 2021 at a high level and be able to compete and help my country. Which is, it’s not a bad thing. But the truth of it is that in summer 2021, I’ll be 41, which is a  challenge.

And it’s something that might excite me, being a very challenge-driven person and very ambitious always. And it is very much still a desire to be able to play my fifth  Olympics and potentially that being my very last tournament. I don’t know if there is such a thing, you know, as a perfect ending. Obviously winning an Olympic medal, a gold medal, would be, I think, the best possible way that you could think of. I’ve come to terms with the fact that if I didn’t have a chance to play again, I’ve had an incredible career. So, I’ll be happy regardless.”

Should Gasol pushes his body to the limit and makes it to the Spanish basketball national team in 2021, he will be the 5th player ever to appear in five Olympics. NBC Sports’ Dan Feldman found out that as per Basketball-Reference, only Puerto Rico’s Teo Cruz, Brazil’s Oscar Schmidt, Australia’s Andrew Gaze and Gasol’s fellow Spaniard Juan Carlos Navarro are the only players to achieve such feat.

Of course, Gasol could only reach that incredible feat if his 40-year old body holds up until next year. By the time the Tokyo Olympics finally opens its doors in 2021, it definitely won’t help that he has not played a single minute of competitive basketball for almost two years. He could still put in the hours on individual workout sessions, but nothing beats the grind and speed of real competitive game.

The road back to the NBA could still be open for the seven-footer. The Portland Trail Blazers acquired him last offseason to provide veteran experience and savvy to the team’s depleted frontcourt. But it turned out that his injury was healing slower than expected in his initial timetable, so Gasol never logged in a single minute with the Blazers. Both parties agreed that it would be better for the All-Star center to focus all of his energy on his recovery.

There is also the saddening possibility that Gasol may have to retire. When he signed with the San Antonio Spurs in 2016, his minutes and production decreased. That was the point in his career that Gasol finally entered his inevitable decline. The best years of his Hall of Fame career are traced to his championship years with late great Kobe Bryant and the Los Angeles Lakers.

He won two rings with the Lakers, although their partnership was marred when the team planned to trade him to the New Orleans Pelicans for the services of point guard Chris Paul. It was a widely-documented agreed trade deal that was surprisingly vetoed by then NBA Commissioner David Stern. In an interview with ESPN’s Zach Lowe on Instagram early this month, Gasol emphasized that it was indeed an emotional challenge for him to still don the Lakers threads after learning about the vetoed trade.

“It was difficult. Emotionally it was difficult for me, but I tried my best. I tried my best to be the best professional I could be and do my job at the end of the day and get back into it. It’s like ‘okay, this happened. It almost happened, but it didn’t happen.  It’s part of the business.’ You’ve got to understand that sometimes it plays in your favor, sometimes it doesn’t... But it didn’t, and I was able to play two or three more years with the Lakers and I enjoyed that as well even though they weren’t my best years.”

True enough, Gasol’s three straight All-Star appearances as a Laker came to a halt during that same season when the trade was vetoed. He would spend three more years in Los Angeles, consistently averaging in double-double numbers in each season. Then it was in the summer of 2014 that Gasol finally moved on, and signed a three-year deal with the Chicago Bulls.

While many thought that his departure from the bright lights of Hollywood would also result to his drastic decline, Gasol proved his critics wrong. He normed 18.5 points, 11.8 rebounds and 1.9 blocks in his first season with the Bulls, then proceeded to put up a more all-around stat line in his second year. He spent two seasons in Chicago, both of which Gasol was selected to the All-Star game.

As for now, Gasol has not expressed a concrete plan to return to the league. In fact, he hinted that there could be a possibility that he will end his fruitful basketball career in his home country. Gasol said that he has always entertained the idea of playing pro basketball in Spain, but reiterated that he still wants to play with the “best players” in the NBA.

“Yes, it has an appeal for sure. I’ve said that since I left Barcelona to come to the NBA but I’ve always said that the longer I play in the NBA, which I love, the harder will be for me to go back and play for one year in Spain. We will see, maybe it will work out, maybe it’s in the books, maybe it’s not. It has a certain appeal but I still like to play in the best league [NBA] with the best players.

I got to focus on what I control which is my rehab and kind of follow that process and be healthy. I got to take it one day at a time, stay strong, stay positive, stick to my routines and be ready for when I’ll be able to go out there.”

If he indeed plots a return to the NBA, it’s safe to say that plenty of teams will still come knocking on his door. He has a multi-dimensional offensive talent that allows him to score or make plays for his teammates from the post. Gasol can log in quality minutes for any contending team, while being a vocal leader and anchor on both offense and defense.