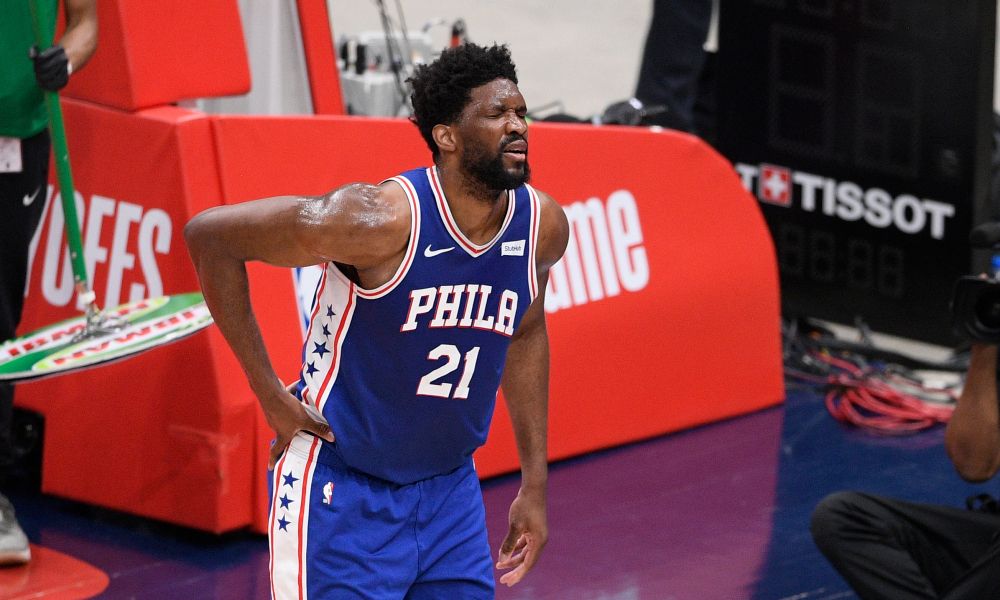 The Philadelphia 76ers were on the verge of potentially sweeping the Washington Wizards, until their Most Valuable Player of the year frontrunner Joel Embiid exited with a right knee injury. Embiid only logged in a total of 11:24 minutes in Game 4 of the Wizards’ first round playoff match-up against the Wizards when he appeared to collide with bruising big man Robin Lopez in mid-air. Embiid stayed on the ground for a while, and even tried to finish the first quarter of the game.

But it was obvious right there and then that Embiid was just trying his best to play through the injury. Embiid was able to put up a decent stat line of 8 points, 6 rebounds, 2 assists and 1 steal, and finished with a 2-6 overall clip from the field, a 0-2 clip from the three-point line, and a perfect 4-4 clip from the free throw line.

Senior writer Brian Windhorst of the ESPN wrote a brief but concise narration of what went down with Embiid’s unfortunate injury in Game 4. Windhorst also mentioned that Embiid is set to have an MRI, and there is still a cloud of uncertainty as to whether the superstar big man can play in the all-important, pivotal Game 5 in Philly.

Sixers coach Doc Rivers said Embiid would have an MRI on Tuesday and   was uncertain if he would be able to play in Wednesday's Game 5 in Philadelphia as the 76ers, up 3-1 in the series, try again to clinch. Embiid crashed to the floor after he was met in the air at the rim by Wizards center Robin Lopez just over seven minutes into the game. Lopez cleanly blocked the shot, but Embiid lost his balance on the way  down and crashed onto his backside, instantly grimacing in pain.

Embiid stayed in the game after a timeout and finished out the first quarter but was in some discomfort, holding his lower right back area. After checking out of the game in the final seconds of the first quarter, he went to the locker room, limping slightly, and never returned. Embiid made an impact in his time on floor, scoring eight points with six rebounds, two assists and a steal in the first quarter. He came into the game averaging 30 points on 67% shooting in the series.

Embiid, who is now on his fifth year in the league, is currently putting up a career-high of 28.5 points per game this season. He puts up all that scoring on a daily basis while also norming an all-around stat line of 10.6 rebounds, 2.8 assists, 1.0 steals and 1.4 blocks per contest.

On top of all these exceptional numbers, the Sixers big man is also producing a career-best performance in terms of his shooting percentages. Embiid is norming a very efficient 51% overall clip from the field, a stellar 37% clip from beyond the arc, and a much-improved 85% clip from the charity stripe.

It is indeed an extraordinary story for Embiid, who sat out his first two seasons in the league due to a major foot injury. He was selected 3rd overall by the Sixers during the 2014 NBA Draft, but waited until the 2016-17 season for him to play. There were doubts back then if the foot injury could have hampered Embiid’s development as a young player, but he quickly shut down those criticisms when he averaged 20.2 points, 7.8 rebounds, 2.1 assists and 2.5 blocks in his rookie year.

He has now notched four straight All-Star appearances, and has positioned himself in a front-running spot for the MVP award this season. He is doing all this in today’s small-ball era, but it is also true that Embiid is not your ordinary traditional big man. Rob Mahoney of The Ringer took note of why Embiid is an exception to the NBA’s defensive schemes against a big man.

All it takes for an NBA defense to neutralize a typical post-up is a little bit of organization. It’s simple enough to station a few defenders within range of a posting giant, to pounce and swipe at the ball when he eventually makes his move. Even teams giving up size can run enough interference to make passing the ball into the post a chore, and  scramble enough once it gets there to turn the shot clock in their favor. When pitted against efficient pick-and-roll machines that manufacture  layup opportunities and open 3s, high-volume post play—like many of its Jurassic practitioners—is too cumbersome to be worth the trouble.

Joel Embiid is the towering exception. Every game Embiid plays in is a game about Embiid. He is, if not the main character, its central theme. Long before he can begin pummeling overmatched big men down on the block, opposing coaches are forced to reconsider their entire approach to defense. Should they double? Should they try that zone they’ve barely had time to practice? Embiid all but wrests away the lineup card and adjusts his opponent’s rotation himself—first by demanding that the biggest, beefiest center available match up with him in the starting lineup, and then by drawing so many fouls as to call second- and third- stringers into play.

But of course, this version of the Sixers squad is not just about one superstar in Joel Embiid. While it is true that the Sixers still rely very heavily on their superstar big man, the team has a lot of weapons on their arsenal. They have their 6-foot-11 point guard in Ben Simmons, who is putting up an all-around stat line of 14.3 points, 7.2 rebounds, 6.9 assists, 1.6 steals and 0.6 blocks per contest.

But then again, Simmons also has his glaring limitations. While it is true that you cannot pinpoint a specific weakness in his defensive skill set, he still has a lot of work left to do in terms of his scoring. His playmaking and instincts on that end of the floor are exceptional, but just imagine how much damage he can do if he has at least a reliable shot starting from the mid range.

Jonathan Tjarks of The Ringer dove deep into Simmons’ lack of three-point shooting, and why that limits him and the whole Sixers team.

The focus on Simmons’s refusal to shoot 3s misses the bigger point. Simmons attempted one 3 on Thursday, and already has hoisted almost half as many (three) as he did all of last season. The more glaring issue  is that he struggles to score from anywhere outside of 3 feet from the   basket. Simmons is shooting 33.3 percent between 3 and 10 feet and  zero percent between 10 feet and the 3-point line. That trend goes back to his rookie season. Simmons doesn’t really have a plan when he     can’t get to the rim. He can’t shoot off the dribble, and has never had a consistent floater. The end result when he’s forced to shoot are off- balance shots that don’t have much chance.

With his shot not falling, Simmons is looking to pass at every        opportunity. Playmaking always has been the best part of his game, and he has more teammates who can shoot than ever before. Tobias Harris has been revitalized under Rivers, who coached him in Los Angeles, while Seth Curry, Danny Green, rookie Tyrese Maxey, and Milton have all scorched the nets on various nights this season. The biggest benefit of Simmons’s ability to run point at 6-foot-10 is that it allows smaller        combo guards like Curry and Maxey to gun for shots without worrying about setting anyone else up.

Aside from Embiid and Simmons, one could argue that this is the best supporting cast that the Sixers front office have assembled in recent years. Tobias Harris, who is putting up an all-around stat line of 19.5 points, 6.8 rebounds, 3.5 assists, 0.9 steals and 0.8 blocks per game this season, is also producing a very efficient set of shooting percentages.

Harris is shooting a very efficient 51% overall clip from the field, a stellar 39% clip from the three-point line, and an excellent 89% clip from the free throw line. Many people criticized and doubted the max contract that the Sixers front office gave him a couple of summers ago, but Harris’ off-the-charts efficiency this season surely justifies that interesting move by the team.

Still, Embiid’s injury remains a big question for the Sixers to answer. Will he miss a playoff game? If yes, how many games will he miss? They are still leading the series against the Wizards, 3-1, but this is a completely different team when Embiid is not there putting forth his elite presence on both ends of the floor. On top of that, Simmons is also struggling mightily from the free throw line, giving the Wizards coaching staff the idea to dust off the Hack-A-Shaq strategy.

Dan Devine of the Ringer examines how a potential absence from Embiid could impede the Sixers’ march to the second round of the 2021 NBA Playoffs, and why it is of utmost importance to boost Simmons’ confidence in performing well in the free throw line.

That’s perfectly fair. Simmons is a fantastic All-NBA-caliber two-way ace who plays a massive role in Philadelphia’s success as a facilitator and defensive weapon. Him taking only a handful of shots and missing a half- dozen free throws, while not the preferred outcome, isn’t the primary reason the Sixers dropped a game to the eighth-seeded Wiz rather than finishing off the sweep. However, one might wonder if this is a“physician, heal thyself” situation—one in which the prescription for what ails Philly, particularly if Embiid needs to miss Game 5, would be for Doc to celebrate the stuff Simmons does well (like creating offense with the ball in his hands for the many catch-and-shoot targets on the Sixers’ roster) rather than presenting him as a target for derision because of what he doesn’t (like waiting on the baseline for someone else to make something happen so he can flash to the middle or hit the        offensive glass).

The Sixers didn’t get the normal they were looking for in Game 4, but they still have more than enough to knock off Washington back at home, with or without the big fella. Getting Embiid as close to 100 percent as possible is the most important thing Philly can do to prepare for the tougher tests that lie ahead. Doing what’s necessary to maximize Simmons, though—rehabilitating his confidence at the stripe, yes, but   just as importantly putting him in positions where he can endanger a  defense rather than let it rest—isn’t far off.

On top of Embiid’s injury and Simmons’ struggles from the free throw line, it is also true that the Wizards are no pushovers. With an explosive, do-it-all point guard in Russell Westbrook and a brilliant scorer in Bradley Beal, the Wizards could try to keep the games close until the end and make shots and put up the defensive stops in the game’s crucial moments.

Game 5 between the Sixers and the Wizards is slated on June 2, Wednesday. The pivotal game will be held at the Wells Fargo Center, the home arena of Simmons and the Sixers.