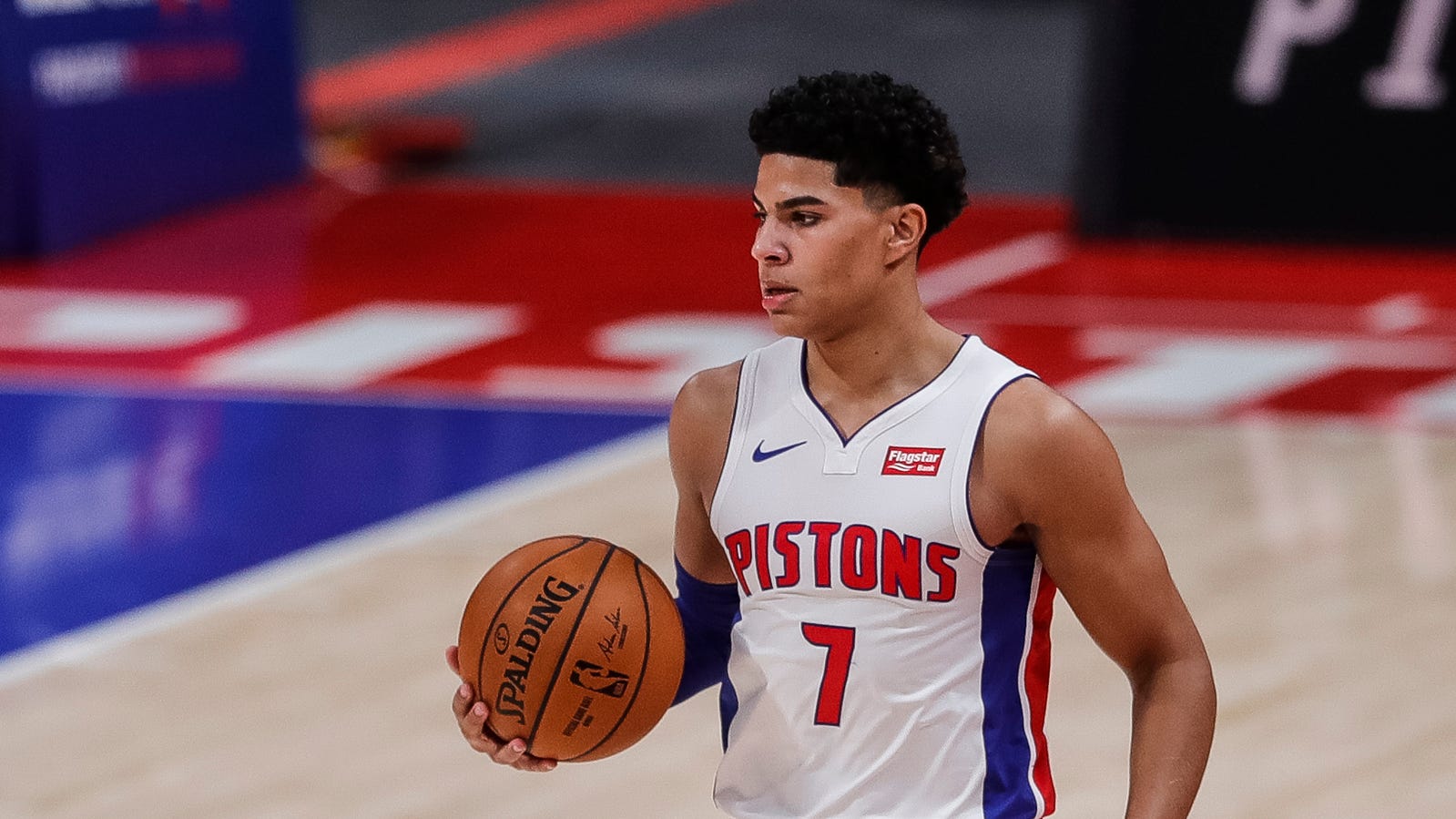 Killian Hayes, the Detroit Pistons’ top selection during the 2020 NBA Draft, has sustained a hip injury that could keep him out for a while. The French point guard suffered the injury during the Pistons’ recent loss to the Milwaukee Bucks, and it was certainly worrisome considering that it was a non-contact injury.

Keith Langlois of NBA.com detailed out how Hayes sustained the injury during that Pistons-Bucks game.

“The Pistons knew accelerating the learning curve of rookie Killian     Hayes by making him a starter would necessitate absorbing a healthy     dose of NBA lessons. They’re now hoping learning how to deal with            lingering injury and the agony of rehabilitation isn’t one of them.

Hayes survived a tweaked right ankle that sidelined him for a half  last week, but Monday’s injury to his right hip might be more troublesome. Hayes crumpled to the court while pursuing Milwaukee’s Jrue Holiday in transition after a Pistons turnover early in the second half of their 125-115 loss to the Bucks, grabbing at his upper right thigh and hip as he grimaced from a non-contact injury and sending the team’s medical staff into scramble mode.”

Even though Hayes is not producing eye-popping numbers, this will definitely hinder his progress, as well as the Pistons’ pursuit of their collective goals this season. Hayes has started in all of his first seven games in the NBA, and is norming averages of 4.6 points, 1.1 rebounds, and 3.6 assists in the 21.1 minutes per contest that he is logging in this season.

The obvious setbacks lie within Hayes’ efficiency and shooting percentages. He is only producing a lowly 25%  clip from the three-point line, and a measly 27% overall clip from the field. Hayes is obviously struggling right now, but the Pistons may have already calculated this misery as a growing pain in their rookie point guard’s development.

Pistons beat writer James L. Edwards III of The Athletic wrote a column detailing out why people shouldn’t focus a lot on Hayes’ struggles, especially at these early stages of the season.

“The rookie has had a tough time adjusting to the NBA, but that is        expected from anyone in his position. Hayes, who was labeled as an  exceptional passer coming into the league, has shown regular flashes  of the vision and high IQ that made him a lottery pick. Defensively, he’s      further along than many 19-year-old point guards. But Hayes has               regularly struggled to create space against pestering NBA defenders. He      still doesn’t look comfortable against aggressive on-ball defenders who     are picking him up at half court. Furthermore, Hayes has yet to figure  out how he can effectively score at this level.

All are aspects that, with more playing time, should improve over the           course of the season. A lot of his inconsistencies are a product of a lack of feel for the NBA game. There was no Summer League and the  preseason was shortened, leaving this rookie class at a disadvantage. These first few weeks of the regular season essentially were going to act as an extended preseason.”

With Hayes sitting out maybe a few more games, veteran point guard Derrick Rose and Delon Wright will see an uptick in their playing time. Wright, who has been quite the journeyman in the past four years, is currently averaging 7.9 points, 3.0 rebounds and 3.1 assists for the Pistons. He is mostly coming off the bench for his new team, and is logging in 23.0 minutes per game.

As for Rose, the former MVP is tallying 16.2 points and 6.2 assists in just 26.5 minutes per contest. That is a very efficient average for the 32-year old guard, especially considering that his assists average this year is his highest since the 2013-14 season.

Despite knowing that he can still put up the numbers if he wanted to, Rose has accepted the sixth man role for the Pistons, as well as the job of a mentor for the 19-year old Hayes. Rose said that he will be exerting much effort to prepare Hayes for the real game, just like how he was mentored when he was still a new player in the NBA years ago.

“They’d pick us up full court, trap us, make us feel uncomfortable. I’ve           kind of got to do the same thing with him – make it uncomfortable for       him so when he’s in the game, it feels normal. I’m not worried about him, but being an older guy, my job is to prep him.

I love his game. It’s an honor to play with a talent like that. I told him, he was the future of the game. My job is to push him and to groom him. Coming from overseas, guys are going to try to play aggressive with him, so it’s my job to play aggressive on him throughout this whole camp   so when he gets in a game he won’t feel that much pressure.”

It will be a tough, grind-it-out season for the Pistons, especially given the depth of the teams in the Eastern Conference this year. There’s a high chance that the Pistons will not make it to the playoffs this season, but the important thing is that they are headed to the right direction moving forward.

Griffin sits out for the third time this season

Blake Griffin has sat out for the third time early into this season. The Pistons’ injury report indicated that Griffin is out on a day-to-day basis due to a left knee injury.

Griffin, who is now 31 years of age, is producing decent numbers of 15.5 points, 5.3 rebounds, 3.3 assists and 1.3 steals per game this season. While it’s true that those are numbers below the standards of a player with a max contract, Griffin has also slightly increased his shooting percentages this year.

Griffin is currently attempting a career-high 8.3 shots from beyond the arc, and he is making an excellent 39%  of those shots. That is a good sign moving forward, especially with him having endured tons of injuries that have stripped him of his elite athleticism.

Even though his athleticism has now decreased to an all-time low, Griffin reiterated that he still wants to win. The veteran power forward also put in his thoughts on mentoring the Pistons’ young guns, and why individual awards never mattered to him. (h/t Sopan Deb of The New York Times)

“I’ve also just really enjoyed it, especially this group of rookies that we have now. They’re great players, but great kids. They want to learn. They come. They ask you questions.

The individual awards and these things are fine, and I’m appreciative of them, but I just want to win. Not making it to a conference final, yeah, it does gnaw at me. Not to the point where I’m losing sleep over it. But that’s the main goal — I want to win.”

It will be a very difficult year for Griffin, and will be even harder if he again suffer an injury that will further impede his skills and physical prowess on the basketball court. Still, the Pistons will look at him as their leader, and Griffin knows that he has the right amount of tools to be a good one.