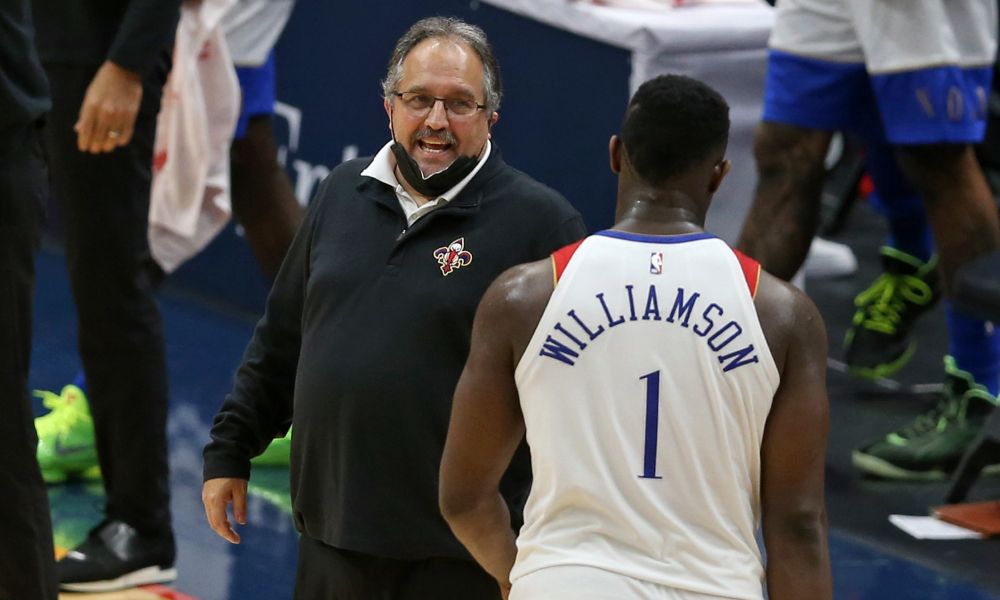 With the New Orleans Pelicans in the thick of chasing a coveted ticket to the NBA play-in tournament, they will pursue this mission without their main star. It is being reported that Pelicans star power forward Zion Williamson has suffered a fracture on his left ring finger, an injury that would keep him out indefinitely. There is no exact timetable for Zion’s return, but this setback could force him to sit out the rest of the regular season considering that the Pelicans only have four games left on their schedule.

This is indeed an unfortunate turn of events for the Pelicans, especially considering how Zion has turned into a more well-rounded player this season. Williamson, who notched his first All-Star appearance this year, is currently putting up a tremendous all-around stat line of 27.0 points, 7.2 rebounds, 3.7 assists, 0.9 steals and 0.6 blocks per game.

On top of all these excellent numbers, Zion is also shooting a very efficient 61% overall clip from the field, and has improved his free throw shooting from 64% last season to a 69% clip this year. That is not much of a development if you just look at the numbers, but any improvement for Zion in that facet of his game is much-welcomed considering that he is averaging 8.7 free throw attempts per contest.

Zion has stayed largely healthy this season, having played 61 games while logging in 33.2 minutes per contest. But as per Andrew Lopez of ESPN, Pelicans executive vice president of basketball operations David Griffin laments the fact that referees have not called enough fouls against opposing teams, which is resulting to Zion absorbing all kinds of hits without even getting the benefit of going to the free throw line. Griffin even said the hits and non-called fouls that Zion is getting are comparable to how teams would maul Shaquille O’Neal in his prime.

I'm really frustrated because this was avoidable. We told the NBA through every means available to us, through sending in film, through speaking to everybody in the officials department and everybody in basketball operations, that the way they were officiating Zion was going to get him injured. And quite frankly, he's injured because of the open season that there's been on Zion Williamson in the paint. He has been absolutely mauled in the paint on a regular basis to the point that other players have said to him, 'I'm going to keep doing this to you because they don't call it.' There is more violence encouraged in the paint than any player I've seen since [Shaquille O'Neal]. It was egregious and horrific then, and the same is true now."

Of course, you cannot say all these things and escape with no punishment from the league. It was announced earlier today that the NBA has fined Griffin a total of $50,000 for what is perceived as “public criticism of the officiating and comments detrimental to the NBA,” as per a column written by ESPN.

Still, Griffin does have a significant amount of evidence pointing out to the fact that the referees could have called more fouls by opposing teams on Zion. Even during his rookie season last year, Zion has made it known that he will a unique blend of creativity and brute force to get his shots around the rim. His special combination of elite athleticism and herculean physique have made that goal possible, and his defenders would often resort to being more physical to him than on any other player.

So far, Zion has 529 free throw attempts this season, putting him in third place behind Milwaukee Bucks superstar Giannis Antetokounmpo and Philadelphia 76ers superstar Joel Embiid. It means that Zion is still getting a big share of free throws every game, but it is also true that that number could further increase if referees will be stricter in giving Zion’s defenders more leeway in getting physical with the first-time All-Star power forward.

This is not the first time that Zion has sustained a finger injury. William Guillory of The Athletic wrote that the Pelicans young star also suffered a thumb injury last month, a setback that forced him to sit out three games. But Guillory also pointed outthat Zion and the Pelicans may complain again and again, but the NBA is an “entertainment business” and fans and people do not want to see a free throw fest going on in every game. It is the same sentiment that basketball fans complained about when James Harden would go to the free throw line at least ten times in almost every game, and that thought could be hurting the league.

Williamson was similarly silent after he suffered a thumb injury in early April that cost him three games because people were constantly hacking his arms on drives. Griffin said the injury was so severe that it would’ve required surgery for many players, but Williamson played through the pain.

In the end, the NBA is an entertainment business. The league’s priority should be protecting their stars so they can always be available to play on their TV broadcasts and bring in loads of money. Having a transcendent talent like Williamson on the sidelines is always going to be  bad for business, especially if the reason he’s there is something avoidable. But the NBA also knows that people don’t want to tune in to watch free-throw contests either. This is where the Zion dilemma becomes such a big issue for New Orleans. There’s always going to be  that natural conflict as long as Williamson’s game remains dependent upon aggression and physicality.

As for the Pelicans as a whole, it is without a doubt that there is still a lot of work left to do. They are currently sporting a record of 30 wins against 37 defeats, which is good for the 11th seed in the stacked Western Conference standings. They still have a lot of ground to cover if they want to catch up to the San Antonio Spurs’ record of 32 wins against 35 defeats, which is enough to nab the 10th spot in the West and the last seat to the play-in tournament after the regular season.

The Pelicans have been improving at a steady rate in terms of their offense this season. They are currently ranked 8th in total points per game (115.0 points), and 11th in offensive rating with 114.1. With the likes of Zion and Steven Adams gobbling up the boards on both ends of the floor, the Pelicans are currently ranked 3rd in the league in total rebounds per game (47.3 rebounds). They are also pounding the ball inside the paint, evidenced by their 58.3 two-point attempts per game, which is already ranked 4th in the whole league.

But while it is true that their offense is improving, it is on the defensive end of the floor that the Pelicans are having tons of problems. They are only ranked 24thin the league in giving up total opponent points per game (114.7 points), and they are not closing out well on the opposing teams’ three-point shooters as they are only ranked 28th in the league in opposing teams’ three-point percentage (38%).

With head coach Stan Van Gundy just in his first year with the team, it might take a while before the Pelicans become a solid playoff contender in the West. There are just so many great teams in the conference right now, not to mention that the Pelicans’ main core are all young and inexperienced. As per Kevin O’Connor of The Ringer, Van Gundy challenged his players to become more of a two-way player, a term that we use nowadays to describe players who can excel on both offense and defense.

“Some guys have to start taking individual responsibility here to come out and play hard. You can’t have the guy you’re playing against be playing harder than you on a consistent basis. Your best players have to take responsibility to defend, play harder, and take care of the ball. I think these guys will turn it around. I have confidence in them. But I would say it’s more that I have faith in them because faith is a belief in  things unseen. I talked to them today and I said, ‘Let’s look at some of the great duos in this league: LeBron James and Anthony Davis, Paul George and Kawhi Leonard, and Giannis Antetokounmpo and Khris Middleton. What do they all have in common?’

My point was they’re all guys that play both ends of the floor. They’re two-way guys. My challenge is to create a better offensive framework and spacing for those two guys. Their challenge is to take the   responsibility defensively, step forward, and become better defenders.  We need to get a defensive disposition back, where we play harder, where we’re into people more, putting pressure on people, where we’re closing out harder, where everything is done at a higher level,” Van Gundy said.  “We need to go to work to build better habits. But you don’t build a habit in one game or one practice or overnight. It’s day after day after day after day.”

But with Zion probably sitting out the rest of the regular season, the Pelicans will need more than energy on the defensive end to hack out wins. They have to be almost perfect in each possession, and their role and bench players have to step up to the challenge of providing timely buckets on the offensive end and timely stops on the defensive end of the floor.

After their recent win against LaMelo Ball and the Charlotte Hornets, the Pelicans will close out their current five-game road trip with tough important games against Ja Morant and the Memphis Grizzlies, Luka Doncic and the Dallas Mavericks, and Stephen Curry and the Golden State Warriors. Brandon Ingram, Eric Bledsoe, Lonzo Ball and the rest of the Pelicans squad will then complete their regular season schedule with a very important match-up against Anthony Davis and the defending champs, the Los Angeles Lakers.