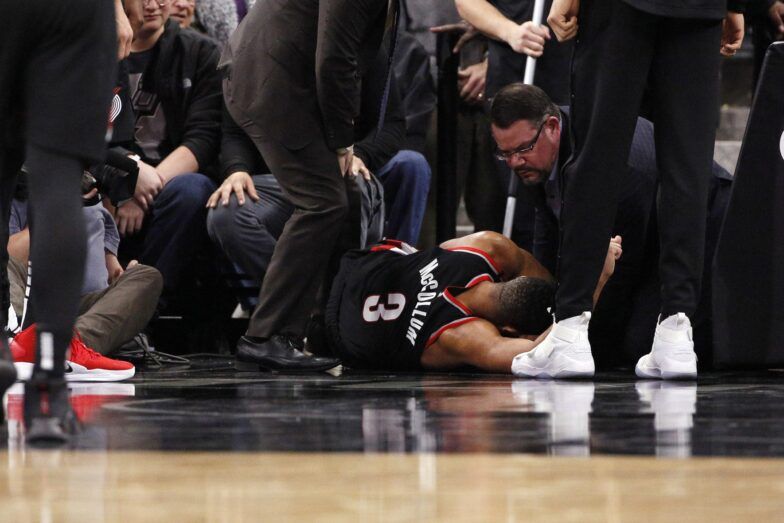 Portland Trail Blazers star shooting guard CJ McCollum is set to miss some time due to a left foot injury. It is being reported that the 29-year old spitfire gunner will take up to four weeks to recover, a significant amount of time considering that this NBA campaign features a shortened regular season.

McCollum, who is having a career-best season so far, is currently putting up 26.7 points, 3.9 rebounds, 5.0 assists and 1.3 steals per contest. He is also norming a stellar 44%  clip from the three-point line, an astounding percentage for a perimeter player who almost always takes his shots off the dribble.

This is indeed an unfortunate setback for the Blazers, especially now that they also lost starting center Jusuf Nurkic to a separate injury. Diagnosis concluded that there is a small fracture in McCollum’s left foot that will force him to sit out tons of games for the Blazers, as per ESPN.

“McCollum left the Blazers' 112-106 victory over the Atlanta Hawks on          Saturday at halftime with what the team called a left foot sprain. It    was unclear when he was hurt, but it appeared the Hawks' Clint Capela stepped on McCollum's foot following a layup in the opening quarter.

Earlier Monday, Stotts had told reporters that McCollum's sprained left     foot would be reevaluated in a week. But the Blazers, in a statement late Monday night, said further imaging showed "a small hairline             fracture to the lateral cuneiform" in McCollum's left foot.”

McCollum has been nothing short of spectacular this season. He finished with 44 points in the Blazers’ second game of the season, and has eclipsed the 25-point mark eight times in the 13 games that he played this year. The excellent efficiency that comes with his high usage rate launches him in the MVP conversation this year, and there is no doubt that McCollum is just getting started.

Damian Lillard, still the Blazers’ undisputed leader, credits CJ’s dedication to improve on his craft that has been the driving force of his brilliance this season. He said that this same commitment has made their backcourt partnership stronger on and off the court.

Lillard also reiterated that they take much pride in seeing each other grow and improve. As per Ashley Young of NBC Sports, the Blazers point guard say that he and McCollum bring out the best of each other.

“It’s the work that you do behind closed doors. It always comes to the     light. I think because me and CJ come from similar backgrounds as far       as our route getting here, being under-recruited players coming out of high school, going to small schools and having to earn everything that we have, we’ve always had to work for it, we’ve always had to believe in ourselves and accepting mediocrity was never a part of that.

McCollum, the 10th overall pick in the 2013 NBA Draft, has been with the Blazers throughout his whole career. He only logged in 12.5 minutes per contest as a rookie, which then drastically grew to 34.8 in his third year with the team.

His scoring also took a drastic increase in his third season with the Blazers. From only 6.8 points, 1.5 rebounds and 1.0 assists during his sophomore year, McCollum’s stat line grew to 20.8 points, 3.2 boards and 4.3 dimes in that third season. It is no coincidence that he won the Most Improved Player of the Year during that season, an excellent indication of how he has developed his overall skill set.

With McCollum set to sit out games, the Blazers will have to rely heavily again on Lillard, then dig deep into their roster depth to make up for McCollum’s impact on the offensive end of the floor. Veteran scorer Carmelo Anthony should be able to ramp up his scoring a bit more, while the likes of Gary Trent, Rodney Hood and Anfernee Simons will be seeing an uptick in their playing time.

Still, the ball is on Lillard’s court, and it boils down to how and where he can steer this injury-plagued Blazers squad this season.

Indiana Pacers center Myles Turner has suffered a fracture in his right hand. The 24-year old big man, who is on his sixth year with the Pacers, is on a day-to-day basis but it is expected that he will be sitting out a few games to fully recover from his hand injury.

The good news is that the injury will not require any form of surgery. That is a fortunate circumstance considering that fractures almost always result to some type of surgery for players. Despite the injury, Pacers head coach Nate Bjorkgren said that Turner even recently attended a team practice session as he credited his player’s resiliency despite already being hurt, as per ESPN’s Eric Woodyard.

"He's a stud. ... There's nothing that's going to stop him," Bjorkgren said      following practice. "There was first news that this could be two or   three weeks and all that. He comes up to me and he's like, 'Coach, no way.' ... The thing I like most about him is what he said to me today and just his toughness. He didn't sit out one part of practice. They put like a little pad on his hand and they taped it up. I mean it, just his overall toughness is very impressive."

This is an unfortunate setback for Turner, especially with him putting up arguably the best year of his career. The sixth-year man is currently tallying an all-around stat line of 12.4 points, 6.8 rebounds, 1.5 steals and career-high 4.2 blocks per contest. Turner is steadily building up a solid case for the Defensive Player of the Year plum this season, and there is no doubt that he is already a top-notch rim protector in the league.

Malcolm Brogdon, the Pacers’ starting point guard, emphasizes how valuable Turner is on the defensive end of the floor. He says that Turner’s mere presence makes the opposing team’s offensive players think twice before they go strong and hard to the rim, as per J. Michael of the Indianapolis Star.

Staying in front of the opponent, anticipating and helping, is the key.  So is being able to switch 1 through 5. This actually takes more effort and discipline than relying on a shot-blocker to erase every mistake of a defense that breaks down. The Pacers have to get into correct position  first. They can worry about Turner at a later date.

"Everybody has to step their energy up and a play a bigger role          defensively because Myles is such a presence at the rim blocking shots,      rebounding the ball," Brogdon said. "Just his presence in the game     discourages people from driving to the rim and that's what we haven't    had. Our help side and team defense has to be even better."

With Turner out, All-Star big man Domantas Sabonis will be playing more minutes in the center position. The Pacers are already missing the services of scoring forward T.J. Warren, while they have announced that Caris LeVert, the star they acquired in that powerhouse four-team James Harden deal, is out indefinitely due to issues found in his left kidney.