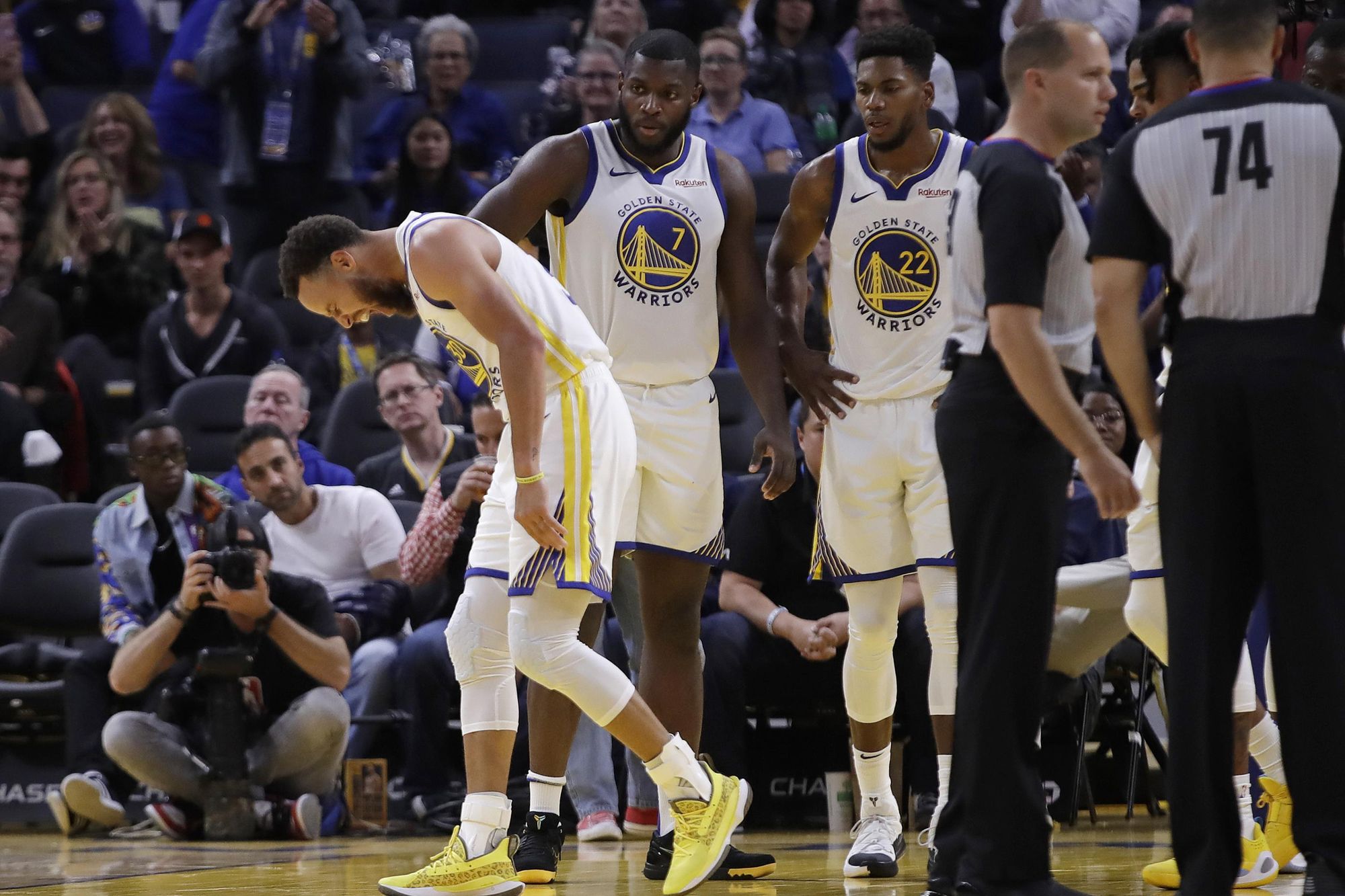 NBA Injury Report: Season May Be Lost For Warriors As Curry Goes Down

We won’t see the Splash Brothers splash triples anytime soon. The Warriors again hit another major setback as Stephen Curry broke his left hand after an awkward fall during a game against the Phoenix Suns. The Warriors already lost Klay Thompson due to his recovery from a Torn ACL injury. This recent Curry setback could just might cost Golden State a playoff spot in the Western Conference. Curry is reportedly set to miss three months, and he will be re-evaluated after that span of time.

Warriors team owner Joe Lacob expressed his remorse over what happened but also pointed out that it will give their younger players the opportunity to show what they can do, per Nick Friedell of the ESPN.

The Warriors were coming off a much-needed win against the New Orleans Pelicans after losing their first two games in embarrassing fashion. They were also down big against the Suns before Curry suffered that awkward fall. Through four games this season, the two-time MVP averaged 20.3 points, 5.0 rebounds, 6.5 assists and 1.3 steals per contest. The major dip in Curry’s performance is his lowly 24% clip from three-point territory, an uncommon territory for the six-time All-Star. Curry averaged above 40% from beyond the arc in each of his previous 10 seasons.

Still, this is not the first time that Curry will go through a major rehabilitation. He already endured consecutive ankle injuries, and he has powered through all of those hurdles. Curry’s father, Dell Curry, says that his son is still committed to playing for Team USA in next year’s Olympics. However, the 16-year NBA veteran also emphasized that Steph will be patient throughout the recovery, per Marc J. Spears of The Undefeated.

He's been through injuries before with the ankle. He understands the rehab that it takes to get through it. He knows about injuries and what goes through that. He's got to be patient and make sure he is fully healthy before he comes back."

Without Klay and Steph, the Warriors will rely on all-around stalwart Draymond Green and newly-acquired All-Star D’Angelo Russell. But the bad news is that both Green and Russell recently sustained short-term injuries. If the Warriors keep on losing games this season, they might even manage the load of those two stars and probably decide to shut down Curry and Thompson for the entirety of the year.

The Kuzmania is finally showing at Los Angeles. Lakers young budding forward Kyle Kuzma has made his return following a lengthy recovery from an ankle injury that kept him out of training camp and the team’s first few games of the season. Kuzma had his season debut in a win against the Dallas Mavericks, where he logged in 18 minutes and tallied 9 points and 3 rebounds.

It remains to be seen if Lakers head coach Frank Vogel will insert him to the starting line-up at some point of the season. But for now, both Kuzma and the team will benefit from him coming off the bench and delivering his scoring punch with the second unit. Kuzma says that he is still receiving treatment for his ankle, per Broderick Turner of the Los Angeles Times.

“I’ll probably have it for a while. It’s a cold compression that I need, especially this being my first game, being able to size down my inflammation, if I have any.”

The 24-year old gunner could have played for the national squad in the recent FIBA World Cup. But the injury he sustained ultimately forced him to withdraw from contending for a spot in Team USA. He is coming off an impressive sophomore year that saw him average 18.7 points, 5.5 rebounds and 2.5 assists per contest. The fact that Team USA head coach Gregg Popovich took notice of his skill set already tells us enough about how good a player Kuzma already is.

There’s no denying that the injury will strip Kuzma of his desire to improve his game. Lakers superstar big man Anthony Davis told the Lakers Nation that he was inspired of Kuzma’s work ethic while recovering from his injury.

“He works his ass off to get back every day before practice, after practice. He’s one of those guys you got to pull off the floor

He’s been doing a great job with coach Phil on adding to his game, staying in the  weight room, getting stronger, making sure his foot is OK, and it all paid off. The more I see him work, the more he inspires me.”

Furthermore. Kuzma’s vast arsenal on offense greatly complements the skill sets of both Davis and LeBron James. While his three-point shooting percentage dropped to 30% last season, Kuzma is still a threat from beyond the arc. Combine that with his adept ball-handling skills and his ability to slash to the rim, the Lakers’ offense will definitely receive a huge boost from Kuzma’s return.

Blake Griffin is yet to play his first game of the season, but reports have it that he is closing in on a return. Before the regular season began, the Pistons announced that Griffin has sustained injuries to his knee and hamstring that will keep him out until the first week of November. Eight games through the season, Griffin now tells Shams Charania of The Athletic that he is just waiting for the Pistons medical staff to give him the “green light” to return to the court.

“I feel great and I’m ready to go whenever they give me the green light.

I’m close, very close. The training staff tells me it’s one day at a time. They tell me what I’m doing the next day, and that’s it, because they know I’d go crazy if I have a timetable.”

Without his services, the Pistons are sporting a 3-5 win-loss card to start the year. Derrick Rose, their prized offseason acquisition, has been a bright spot so far. Andre Drummond is pulling in massive double-doubles one after the other. But Griffin’s Swiss Knife-like skill set should be the glue that will produce more cohesiveness and fluidity in the team’s performance on both offense and defense.

The 30-year old six-time All-Star is coming off a very productive season that saw him put up a career-best 24.5 points, while also grabbing 7.5 rebounds and 5.4 assists per game. He led the Pistons to a playoff appearance last year, although they were swept by an inspired Giannis Antetokounmpo-led Milwaukee Bucks squad.

Still, Griffin maintains his excitement on leading Detroit to a more successful playoff run. He described this year’s version of the Pistons as tough and gritty.

“I’m excited because I like this team a lot. We’re tough and we fight. There’s a grit to this team. We have a lot of guys on this team who have played meaningful minutes and are battle-tested vets.

I’m excited about this team and the prospects of coming back and leading this group.”

The Pistons’ next three games will be against the New York Knicks, the Indiana Pacers and the Minnesota Timberwolves. It’s still unsure if Griffin makes his return in those string of games, but the Pistons fan base are certainly excited to have him back in the line-up.