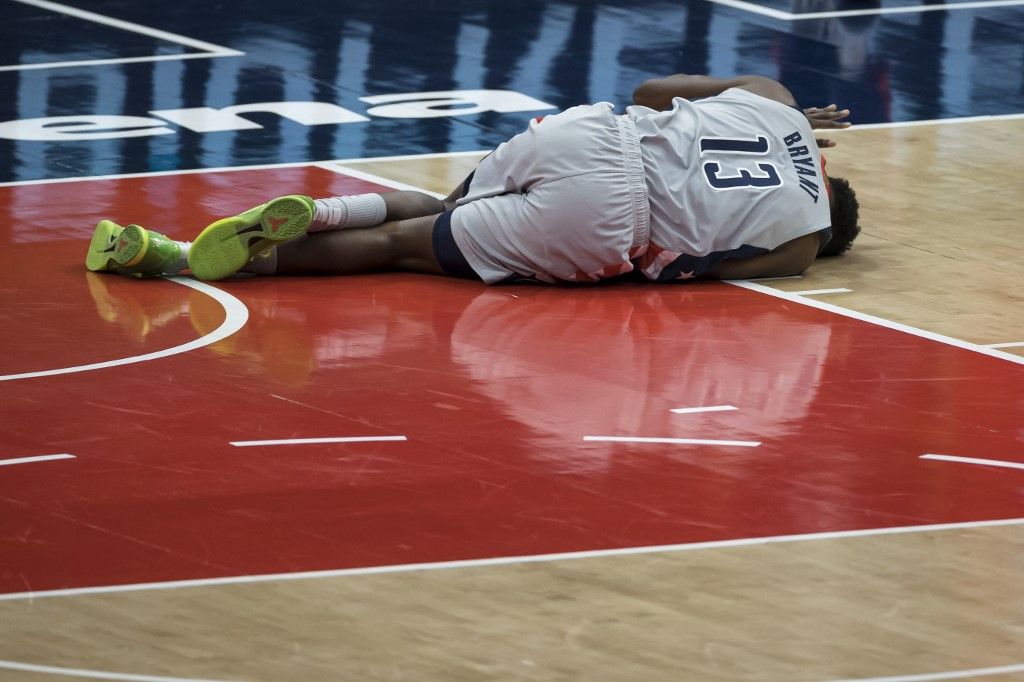 The Washington Wizards’ unfortunate setbacks continue to pile up this season. Thomas Bryant, their 23-year old budding big man, has suffered a Torn ACL injury that will keep him out for the rest of the year. Bryant sustained the injury during a tough 128-124 loss at the hands of the Miami Heat, and exited the game at the ninth-minute mark of the opening quarter.

Via a source by Adrian Wojnarowski, ESPN published a column confirming that Bryant is going to sit out the whole year to recover from the partially torn ACL in his left knee.

“Washington Wizards center Thomas Bryant has a partially torn ACL in      his left knee, with a source telling ESPN's Adrian Wojnarowski that      Bryant will miss the rest of the season.

The Wizards announced the diagnosis Sunday. Bryant suffered the injury   less than two minutes into the Wizards' 128-124 loss to the Heat on     Saturday after incidental contact with two Miami players.”

It is indeed a huge blow for the Wizards, especially with how good and efficient Bryant is playing this season. The 6-foot-10 center is putting up a career-high in the scoring column with 14.3 points per contest, and is shooting a stellar 65%  overall clip from the field. He is not attempting too much three-pointers, but he is making a high 43%  of the 2.1 triples he puts up every game.

While it is true that Bryant is still not yet a caliber of player who could move the needle for a franchise, he has been a positively-contagious presence on both ends of the floor. The energy and intangibles that he brings on the court do not exactly show at the stat sheet, and the maturity that he shows especially on the offensive end has been a bright spot for the Wizards.

Wizards head coach Scott Brooks, who has handled top-notch superstars like Kevin Durant, James Harden and Russell Westbrook, emphasized how fun it is to coach someone like Bryant. But the best improvement that he saw out of Bryant is how he is effectively controlling his emotions, something that he failed to do in his first three years in the NBA. (h/t Ava Wallace of The Washington Post)

“It’s fun to coach him, because he’s emotional. Last year it was not to our advantage. This year, he’s controlling it. His growth in that area, it’s going to help us win a lot of games this year.

[I told him] you’re going to have the best year of your career. You’re     going to have a level of expectation that’s going to be a lot higher than what I could do, what any coach could do. … I think Russell and Brad are going to help him get to another level that he probably didn’t even expect to get to as quick as he has. He’s shooting the ball and playing with confidence — the rebounding and blocking shots is not by happenstance. It’s not because I’m all of a sudden coming up with a better plan.”

Bryant was the 42nd overall pick in the 2017 NBA Draft. He was first selected by the Utah Jazz, but was then shipped to the Los Angeles Lakers. Bryant only logged in a measly 4.8 minutes in the 15 games that he appeared for the Lakers. He was then moved to the Wizards the following year, and his averages drastically grew from 1.5 points and 1.1 rebounds to 10.5 points and 6.3 rebounds.

Most importantly, Bryant is just 23 years of age. There is no doubt that he still has tons of room to grow. He says that having excellent teammates helped him become more patient on the court, and be more efficient and effective in terms of spending his energy and stamina.

It was really, most times, just checking myself, looking at myself in the  mirror, and figuring out key ways to help this team. I play the game  with so much energy, but I don’t want to be a downfall. It took a while.    It took a good while, but it’s a lot of just, like, self-observing.”

However, Bryant’s absence for the rest of the season will definitely sting for the Wizards. The Wizards, who traded long-tenured star guard John Wall in exchange for Westbrook, have started the year on a lowly 3-8 win-loss slate. This is happening in spite of Bradley Beal averaging enormous numbers every game, which speaks for the inefficiency of the rest of the Wizards roster.

If this downward trend continues for Washington, it will not come as a surprise if they put up a fire sale and focus on rebuilding the team moving forward.

The Dallas Mavericks will be receiving a much-needed reinforcement as they gun for a playoff spot in the stacked Western Conference. It is now being reported that star center Kristaps Porzingis is set for his much-awaited return after missing the team’s first nine games of the new season.

ESPN’s Tim MacMahon reported that Porzingis could be suiting up for the Mavericks in their scheduled Monday night face-off against Zion Williamson and the New Orleans Pelicans. It could have been the Latvian big man’s first game since Game 3 of their playoff series against Kawhi Leonard and the Los Angeles Clippers last season.

“Porzingis, who underwent surgery in October to address a lateral meniscus injury in his left knee, is listed as questionable for the first time this season. He is included among the Mavs' likely starters in the team's media notes.

Porzingis has been a full participant in the Mavs' practices for the  past two weeks as he has been ramping up for his return. He has been given a clean bill of health but said he needed time to practice and scrimmage to regain his rhythm before playing in games.”

Despite Porzingis’ absence early into the new season, the Mavericks are off to a decent 5-4 start. They have won games against the Clippers, the Miami Heat, the Houston Rockets, the Denver Nuggets and the Orlando Magic. Dallas is riding a three-game winning streak, and has won four of their previous five assignments.

With Luka Doncic tallying another MVP-caliber stat line of 26.6 points, 9.3 rebounds and 8.3 assists per contest, the Mavs will be a fun team to watch especially when Porzingis comes back.

In a column written by Shlomo Sprung for Forbes, Mavericks head coach Rick Carlisle pointed out to the fact that Porzingis’ recovery and rehab haven’t encountered any issue or setback. Carlisle also reiterated the team’s priority to dig deep on their defensive schemes, and focus on that end of the floor.

“He’s really looked good the whole time in relation to what the given           threshold is. Everything from post-surgery rehab through beginnings of     being in the weight room, beginnings of being on the court. Everything’s gone without issue, which is great.

This is a real challenging road game for us. We’ve just gotta decide that the defensive end is where our bread is buttered.”

Porzingis, who will be turning 26 on August of this year, normed outstanding numbers of 20.4 points, 9.5 rebounds, 1.8 assists and 2.0 blocks per game for the Mavericks last season. His growth to become a solid rebounder and an excellent rim protector will bode well in his important role as the Mavs’ main big man.