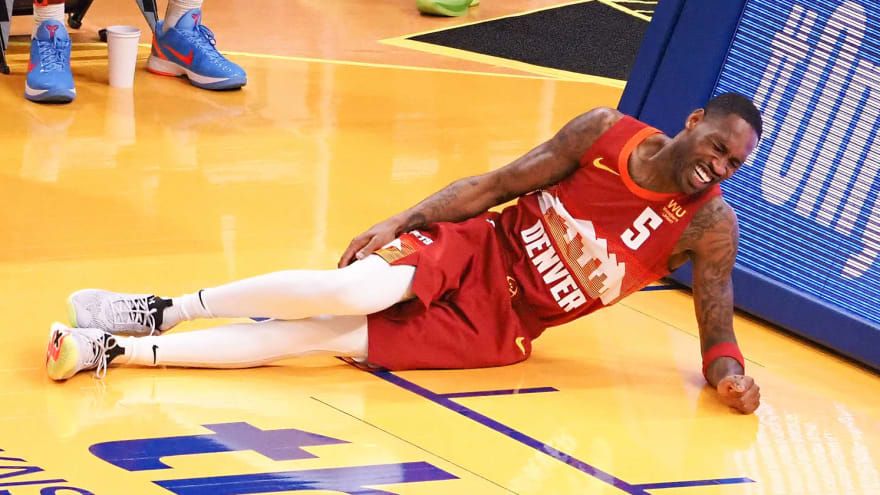 The injury woes continue to pile up for the Denver Nuggets. With the league entering its last stretch towards the more important games in the 2021 NBA Playoffs, the Nuggets will lose all-around small forward Will Barton for at least a couple of games due to a hamstring injury he sustained in the team’s disappointing loss to Stephen Curry and the Golden State Warriors.

It was a very unfortunate turn of events as Barton exited the game early in the first quarter. It was a non-contact injury that would keep Barton out for a significant amount of time, although he is very positive that he will eventually return to the court this season. Barton has started in 52 of the 56 games he played for the Nuggets season, and is currently putting up all-around numbers of 12.7 points, 4.0 rebounds, 3.2 assists and 0.9 steals per contest, including an excellent 38% clip from the three-point line.

As per ESPN, Nuggets head coach Michael Malone pointed out that Barton’s injury was a significant hamstring strain, which could mean that the veteran forward will require at least a couple of weeks to recover from this setback.

The veteran guard pulled up awkwardly after driving to the basket, grimacing as he passed the ball to a teammate. He hobbled his way over near the Nuggets' bench and went down on the baseline, grabbing at his leg. He exited the court and was ruled  out of the game shortly thereafter.

Malone called the injury a "pretty significant hamstring strain" ahead of the Nuggets' game against the Houston Rockets on Saturday night. While a timetable hasn't been set for his return, Barton said you hadn't "seen the last of me this season" in a tweet  on Saturday. Barton's injury leaves the Nuggets short-handed in the backcourt. Star guard Jamal Murray is out for the season after tearing an ACL at Chase Center less than two weeks ago. Backup point guard Monte Morris strained his hamstring earlier this week and has missed the past four games.

But with the recent injury that will keep starting point guard Jamal Murray out for the rest of the season, the Nuggets’ chances of defeating the other elite contenders in the West have definitely lessened. The conference-leading Utah Jazz should be a tough match-up for just about everyone, while Chris Paul and the 2nd-ranked Phoenix Suns squad are steadily building up their chemistry on both ends of the floor.

There is also the fact that the two Los Angeles squads – the Clippers and the Lakers- are still deemed favorites in a seven-game playoff series. Without Murray’s multi-faceted scoring skill set, it would be very difficult for the Nuggets to have enough arsenal and weapons to win four games against those teams.

As per Pat Graham of The Associated Press, Malone said that losing Murray for the rest of the season means that Jokic and the rest of the Nuggets’ supporting cast should be ready to come in and play at their 100% each and every game. Malone singled out Jokic’s brilliance and says that this is a great opportunity for the Serbian big man to show to everyone that he deserves to win the Most Valuable Player award this season.

Malone also reiterated that his team has always been underrated by many in the past couple of years, which means that they are already used to this kind of familiar situation.

“He’s got to be the guy that rights the ship and puts the team on his back, because that’s what MVPs do. Nikola, because he’s that great of a player and has that leadership quality within him, I expect him to understand that and start handling these situations in a manner he’s shown many times before. It’s going to be a terrific opportunity to handle a really difficult situation — for Nikola and all of his teammates. It’s not just on him.

Don’t go out there and try to be something you’re not. Be true to yourself and just bring it every single night. Play hard, compete, play with discipline, play with effort and play on both ends of the floor. If they do that, we’ll have a chance to weather the storm without Jamal. No one ever gives us a chance and we’re fine with that. I think we kind of thrive in that element. We’re underdogs. If they want to talk about all of the other teams, let them talk about them.”

As for the 30-year old Barton, this is certainly a frustrating setback as the Murray injury could have given him the chance to further solidify his position as a tremendous starting small forward in the NBA. It is his sixth year in Denver, and during the first few years that he was with the team, he would usually come off the bench to fulfill a main role for the Nuggets’ second unit.

Barton, a second round selection in the 2012 NBA Draft, started his career with the Portland Trail Blazers. He never eclipsed the 20-minute mark in terms of playing time in the three years that he was with the team, but he showed glimpses of his potential to become an all-around forward that could garner a starting slot for any squad.

He was then moved to the Nuggets in the middle of the 2014-15 season, and Barton immediately blossomed into a quality contributor for his new team. However, it seems like Barton would always get injured right before the playoff, hindering him from really helping his team out there when the stakes are higher in the postseason.

Last season, Barton was not able to fully participate in the Orlando bubble when the Nuggets made that inspiring run to the Western Conference Finals. As per Kendra Andrewsof The Athletic, Barton admits that he was definitely “crushed” because he cannot help his teammates on the court when it matters the most. Barton says that being healthy all-season long is very difficult, but he knows that he could be an excellent player if he achieves that feat. He believes that he is a starter-caliber player in the NBA, and it is just a matter of maintaining his health, especially when the Nuggets transition to the more important games in the postseason.

“Not being able to go out there and compete at a high level with my teammates, it crushed me. It crushed me. It was kind of mentally more difficult than the first injury because I was playing so well and looking forward to playing (in the playoffs)  and then that happening, it was just crushing.

It’s challenging. But, I’m just going to push myself every day and try to do as much as I can. I’ve always said that there’s no shape like basketball shape, and you have to play games to actually be in that type of shape. So I just can’t get frustrated. Keep pushing myself every to do the best I can. I know it’ll come in time, so I’m not really worried about it. As long as I’m healthy, which I am, the rest will fall in place. I’m a starter in this league. I think I’ve proved that year in and year out being one of the  most consistent players in the whole NBA … I think it’s clear cut who I am in this league. I am a starter.”

After their recent win over Kelly Olynyk and the Houston Rockets, the Nuggets will close out their current four-game home stand with tough games against Ja Morant and the Memphis Grizzlies, Zion Williamson and the New Orleans Pelicans and Kyle Lowry and the Toronto Raptors.

They will then embark on a very difficult two-game road trip down in Los Angeles to face both the Clippers and the Lakers.

Kings lose Fox for the next couple of weeks

Sacramento Kings star point guard and main man De’Aaron Fox will sit out the next couple of weeks as he has been placed in the NBA’s health and safety protocols. This setback comes in a very difficult time as the Kings are currently chasing a ticket to the play-in tournament at the end of the regular season.

With Fox sitting out the team’s next several games, it strips the Kings of their primary scorer and playmaker. The Kings are currently sporting a record of 24 wins against 35 defeats, which puts them in the 12th seed in the Western Conference standings. Only the 7th to the 10th-ranked teams are qualified for the play-in tournament, spots that are currently manned by the Portland Trail Blazers, the Memphis Grizzlies, the San Antonio Spurs and the Golden State Warriors. The 11th-seeded New Orleans Pelicans are also positioned ahead of the Kings with their record of 26 wins against 34 defeats.

This is certainly a disappointing setback for Fox, who is currently putting up a career-high in points with 25.2 markers per game, along with his all-around numbers of 3.5 rebounds, 7.2 assists and 1.5 steals. There is no doubt that Fox has established himself as a star in the league, and it is only a matter of time before he can notch his first All-Star appearance in the league.

As per Jason Jonesof The Athletic, Fox is not just performing well on the court, but he is also improving from the leadership standpoint. Fox also says that his aggressiveness on the offensive end of the floor is paying dividends this season. The young star point guard reiterated that he will always try to drive down the lane for a strong finish around the rim.

“For me, I feel like no matter who it is I can pretty much get to the basket. A lot of teams start with taller, longer guys, and in that second quarter a lot I had someone who was my size or smaller. For me sometimes it’s being able to get into the post, get easy, easy looks. And once you see the ball go through the basket a few times then it definitely helps to shoot jumpers after that. I continue to try to play the same way every game: Take what the defense gives you because every team is going to guard you differently. But as long as it’s being in attack mode and being aggressive then you can kind of live with the results.

When I’m going in, I’m still trying to score. Some people are going to the basket just looking for the foul and not even trying to score the layup or whatever shot they’re taking. I’m still going in there to score because if the foul’s not called, I still want to be able to finish. Just being able to figure out those little things has definitely helped me. I think even last year I was kind of learning to do it, but I still wanted to be one  of the best finishers in the league. This year I’m just continuing to grow at it, continuing to get better at it.”

Without their leader and court general, the Kings will have to stay glued together to potentially snatch a spot in the play-in tournament. After their recent win against Karl-Anthony Towns and the Minnesota Timberwolves, the Kings will then travel to Golden State to go up against Steph Curry and the Warriors.

They will then go back home to host Luka Doncic and the Dallas Mavericks, followed by a difficult match-up against Rudy Gobert and the Utah Jazz. It is expected that Fox will be sitting out all those games.