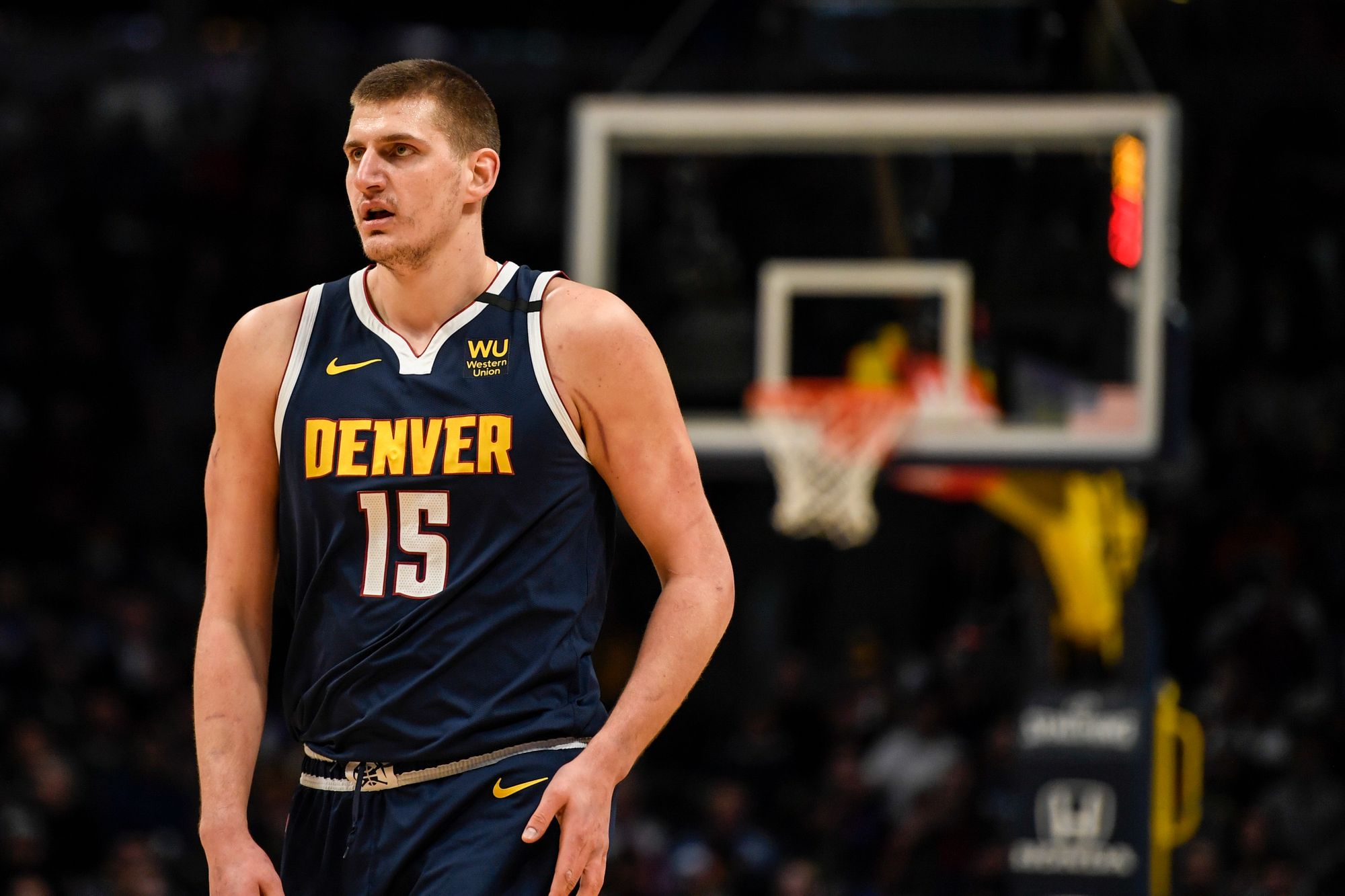 The Nikola Jokic freight train is taking on a brand new level in Denver. With career highs on almost all fronts, the Serbian big man is almost single handedly carrying the Denver Nuggets on his back and on the top of the stacked Western Conference.

It seems like Jokic is getting better year in and year out. We all know him as probably the best playmaking big man that the league has ever seen, but he is doing literally everything for the Nuggets this season. With career highs of 26.1 points, 11.6 rebounds, 8.4 assists and 1.7 steals per contest this season, the Nuggets All-Star center has literally improved just about every category in his already well-rounded stat line.

Nuggets head coach Michael Malone, who has handled Jokic for several years now, said that the fact that his star big man is producing all these numbers every night makes him an elite and true contender for the Most Valuable Player plum this season.

As per Kendra Andrews of The Athletic, Malone pointed out that Jokic has a realistic opportunity to finish this season with a triple double stat line, a feat that is very difficult to achieve, especially if you’re playing the center position.

“He’s going to get the minutes, he’s going to get the opportunity,” Nuggets coach Michael Malone said. “We know that (Jokic) is an efficient scorer. He is a tremendous playmaker and he’s a heckuva rebounder. I think he’s one of the few players in the NBA that you could realistically say would have a chance to average a triple-double on a season.

He doesn’t go into games saying, ‘I’m going to get a triple-double tonight.’ He’s just playing his game. And that’s what we need from him. We need scoring, we need the playmaking, we need the rebounding,” Malone said. “That’s why he’s playing at an MVP level because he’s doing it at a high level every single night.”

On top of all these primary stats, Jokic is also putting up an efficient display in terms of his shooting percentages. He is producing a stellar 56%  overall clip from the field, including an excellent 38%  from the three point line. This is really a tremendous body of work considering that Jokic is also putting up a career high 17.8 field goal attempts per game. Despite the increase in his shots each contest, his efficiency has also improved.

It has gotten to the point that it seems like the rest of the NBA is still puzzled over what they should do against the Nuggets star. Dan Devine of The Ringer recently wrote a detailed column as to why Jokic is bringing in a lot of confusion to the opposing teams’ defenders.

“Four possessions, four buckets, and an awfully tidy encapsulation of  the figure-four that Jokic locks on defenses every night. Show him help in the post, and watch him drop the ball off to a cutter for a layup. Bring a double from the baseline, and watch as he slings a crosscourt dart for a wide-open 3. Play him straight up and a step off, and he dots your eye with the jumper. Play him one-on-one and press him tightly, and he backs you into the charge circle before softly dropping a hook in over your head. As you call timeout, he quietly rumbles back to his bench, and you quietly curse whichever god you pray to, searching for the answer that continues to elude you.

Nobody has solved Jokic yet this season. The Nuggets as a team got out of the blocks slowly, dropping four of their first five games in a disappointing start after making the Western Conference finals last season. (Maybe we should’ve expected some stumbling out of the gate for a team that lost rotation players Jerami Grant, Mason Plumlee, and Torrey Craig in free agency.)”

It won’t be an easy path towards the MVP plum for Jokic, especially with Joel Embiid of the Philadelphia 76ers putting up an MVP worthy season of his own. LeBron James is continuously evolving his unique skill set to adapt to his age and to the type of basketball that we play nowadays. Milwaukee Bucks’ Giannis Antetokounmpo could be making his case for a third straight MVP award, and Dallas Mavericks third year superstar Luka Doncic is constantly putting up the triple doubles.

The Nuggets, who are sporting a decent record of 12 wins against 9 defeats this season, are sitting on the 4th spot in the West. They are still in the middle pack in the conference at this points, especially with the Utah Jazz playing at a higher level this season.

But there is no reason to believe that the Nuggets can climb all the way to the top and compete in the Western Conference Finals again. They are currently ranked 4thin total points per game, 6th in three point percentage, 6thin overall field goal percentage, 5th in steals per game and 7thin assists per game. It is on defense that they need to put in more work as the loss of their previous defensive ace in Jerami Grant could hurt them especially come playoff time.

So everything boils down to how far Jokic can take them, and there is no doubt that the Serbian’s unique skill set could eventually help the Nuggets get over the hump and finally reach the NBA Finals. Even Brooklyn Nets head coach Steve Nash, who was a two-time MVP and one of the most creative passers in league history, could not help but be amazed at how unique Jokic’s game is.

“His IQ, footwork, hand-eye coordination, shooting, vision, reading of the  game is remarkable,” Nets coach Steve Nash said of Jokic. “Offensively, he is a total unique challenge because he’s a point guard in a center  position who can also be a traditional center on the block. He scores  from the three, from the elbow at the free-throw line, he can make plays  that benefit everyone else. He’s a completely unique player historically.”

After their recent loss to the Kings, Jokic and the Nuggets will then go back home to Denver to go up against Giannis and the Bucks. That will be the start of a four-game home stand that will also feature games against the Lakers, the Cleveland Cavaliers and the Oklahoma City Thunder.

The 36-year old LeBron James is still standing above his peers in his 18thyear in the league. With all-around numbers of 25.1 points, 7.8 rebounds and 7.7 assists per contest, the Los Angeles Lakers superstar has garnered the first seat in the recent NBA.com MVP Ladder.

Michael C. Wright wrote that LeBron is not showing any signs of decline, and the fact that he is breaking a lot of records to start the season is a barometer of how well he is playing right now.

“James provided plenty of evidence in the Lakers’ 113-93 win over the  Nuggets by reeling off his second triple-double (27 points, 10 rebounds,  10 assists) of the season — not to mention the 96th of his NBA career —  while also sliding past Wilt Chamberlain for third place all-time in career field goals made (12,691), as Los Angeles captured its 11th victory in 14 games.

At 36 in Year 18, the King continues to show no signs of slowing down, as he’s now notched at least 15 points, five rebounds and five assists in  all 23 games to start the season. That breaks his own league record set in 2011-12 for the most such games to start a season. We can debate whether James deserved more than the four Kia MVPs already in his trophy case (he did), but if he keeps this up, it’s going to be tough to deny this man MVP No. 5.”

It is not usual for players above 36 years of age to still be performing at a level like this. But LeBron has always shown that he is not like any other player. He has always been the role model in keeping his body in optimum shape, and his ability to be almost always available in games is an underrated asset in his skill set.

The greatest part of James’ game is his ability to adapt to the changing styles of how basketball is being played in the NBA. In the first half of his career, he was the best in driving down the lane and coming up with strong finishes around the rim.

That changed when he played for the Miami Heat, where he would introduced a post-play asset in his game. During his second year with the Heat, he was thrust into a power forward role that eventually became one of the starting points of the small-ball movement in the NBA. His ability to play all four positions on offense then guard all five positions on defense made him the perfect player to look up to in today’s positionless basketball.

Now, he has expanded his range and is looking to put more focus on his long range marksmanship. The four-time MVP is putting up a career high 40%  clip from beyond the arc, and is attempting 6.7 triples, also a career high. This efficiency has helped him and the Lakers in their bid to defend their championship.

Most importantly, Jonathan Tjarks of The Ringer points out that his inclination towards hoisting more three-pointers will help LeBron in the long run. It will preserve his stamina and help him avoid sustaining injuries as he approaches the twilight stages of his very illustrious career.

“The most important thing about LeBron’s improved jumper is that it makes the game even easier for him. It takes less energy to put up a jumper than to put your head down and plow to the rim. According to NBA Advanced Stats, his number of drives per game (10.1) is way down from last season (14.1). LeBron is developing his old-man game just as he becomes an old man, by NBA standards.

The amount of miles on his body is staggering. He’s no. 1 in career minutes among active players and no. 7 all time (49,139). The next active player on that list is Carmelo Anthony at no. 32 (40,416). Emphasizing his jumper lets LeBron pick and choose when to run and jump.”

It remains to be seen if James will secure the top spot for the rest of the season, but it is a sure thing that he will again steer this Lakers squad to another deep run in the playoffs.