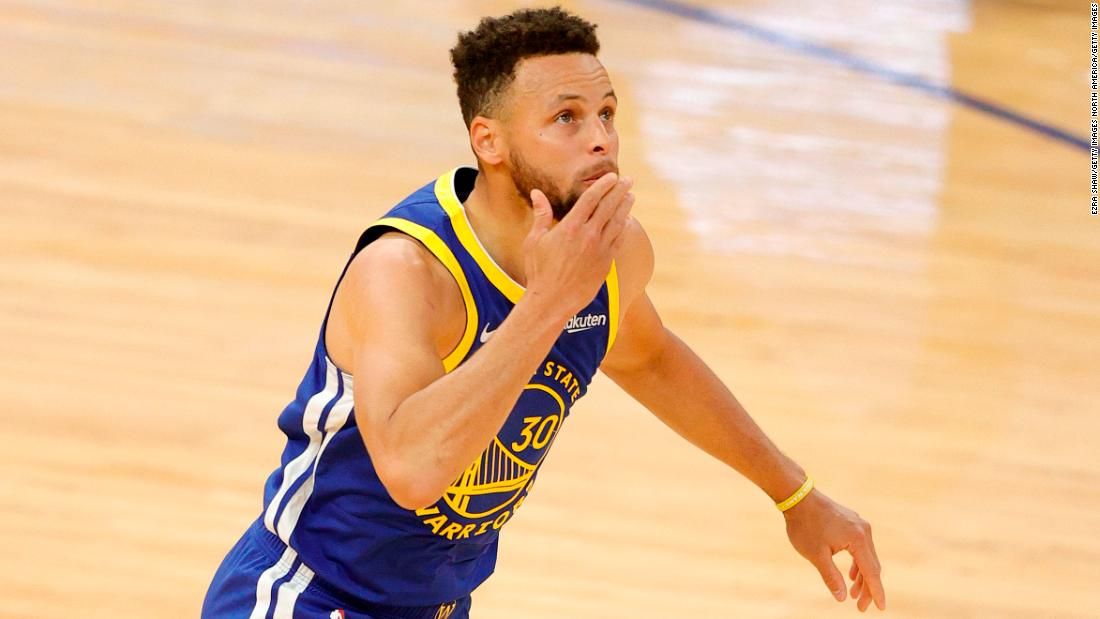 There should not be any question on the fact that Golden State Warriors superstar point guard Stephen Curry is currently putting up another MVP-caliber season. Many people had their doubts on whether the seven-time All-Star guard could still be effective now that he is not playing alongside the injured Klay Thompson, or Kevin Durant, who is now playing for the Brooklyn Nets in the Eastern Conference.

But the two-time Most Valuable Player is certainly silencing all his critics and doubters. Curry, who is now 33 years of age, is currently putting up an impressive all-around stat line of 31.1 points, 5.5 rebounds, 5.9 assists and 1.2 steals per game, including tremendous shooting percentages of a 48% overall clip from the field, and an excellent 42% clip from the three-point line.

With him putting up a career-high on the scoring column, Curry should not doubt be considered as a candidate for the MVP plum this season. He is on pace to have a historic performance on the offensive end of the floor, and he is doing it as the team’s primary scorer. In fact, this version of the Warriors’ active roster does not have other really credible scorers, making life even more difficult for Curry because the opposing teams’ defenders’ sole focus is on containing and stopping him from taking over games.

However, it is becoming apparent that that strategy is not working as the Warriors star is taking his game to greater heights even during this stage of his career. With all the playoff mileage he has coming from the five NBA Finals runs he had been to, it is indeed a surprise that Curry is still performing at this level.

As per ESPN’s Kirk Goldsberry, he wrote a column detailing out just how impressive of a season Curry is putting up right now. Goldsberry chimed in on the fact that Curry has forever changed the game, and that he is doing that by scoring from almost anywhere on the court.

Curry changed the NBA forever by demonstrating it is possible to both create and convert unassisted 3-point shots from distances that used to be considered ludicrous. He has done it all season, converting 41.3% of his 286 unassisted 3-point attempts. In other words, Curry dribbling into 3s is one of the most dangerous actions in the league, and while that has been true for years, it has been especially true during this stretch. Since April 12, Curry has made 50% of  his off-the-dribble 3-pointers with an average shot distance of nearly 28 feet.

For context, these shots are essentially 10-yard completions in football, but instead of a pass-catcher with a catch radius of six feet, Curry's triples are flying right through an 18-inch ring 10 feet above the ground. His accuracy is legendary, and coming into tonight's game versus Denver, Curry leads the NBA in both 3- pointers attempted and made, while converting 42.5% from downtown. He's a threat to score from any angle, but this season he has been particularly dangerous from the wings. He leads the league in scoring from both wings beyond the arc.

Curry has been on a hot streak this season, especially from the three-point line. He has six games this season in which he drained at least ten triples, which now gives him a total of 21 games in his whole career. To put that into a different and more interesting perspective, he now has the most 10+ three-pointers made in a single game in the whole league history. Klay, who is ranked second in that list, only has five games of such performance. That’s how much Curry is dominating that all-time record list.

On top of that impressive performance from beyond the arc, Curry is also producing from almost all fronts on the offensive end of the floor. He had a 62-point performance early in the season, and he already has two more games in which he had at least 50 points. More than those two impressive stats, Curry also eclipsed 40 points in five more games.

To say that Curry has been great this season is indeed an understatement. We have not seen a performance like this before, and it is a testament to how the three-time NBA champion is still changing how the game of basketball is being played nowadays. Recently, he had a scoring streak of 11 games in which he produced at least 30 points each contest. That ended when he scored only 18 points in a disappointing four-point loss to Russell Westbrook and the Washington Wizards.

But it was still a very difficult thing to do, especially with the opposing teams’ defensive game plans focused on stopping him. As per Nick Friedell of ESPN, Curry pointed out to the fact that it was a great run considering that the feat was not accomplished before. Curry also emphasized that he is the least surprised by how he is still performing at a high level. He says that he is peaking at the right time, especially with the Warriors entering the final stretch to potentially booking a ticket to the 2021 NBA Playoffs.

"It was a great run. It was something that hadn't been done before. It was going to end at some point. Now you got to start another one. So it's just a matter of the next-play mentality. Just try to get rejuvenated when we go home -- to do it home,  road, some big games, put a streak together. It was a special ride, for sure. And never really get too hyped up on individual streaks or accolades like that. There  were some historical names that I was able to pass. And doing something at this age was pretty special.

Peaking at the right time. Usually, the trend of our seasons, or my seasons, getting better as each game goes, so I'm glad this season's no different. Just trying to continue to get better and build that confidence of playing my best basketball towards the end of the season."

As for the Warriors team as a whole, there is no doubt that they still have a lot of work left to do. Their recent string of wins have put them in the 9th position in the stacked Western Conference standings. They are sporting a decent record of 30 wins against 30 defeats, which positions them in the play-in tournament if the regular season ended today.

Other teams who are positioned in the play-in tournament in the West are Damian Lillard and the 7th-seeded Portland Trail Blazers, Ja Morant and the 8th-seeded Memphis Grizzlies and DeMar DeRozan and the 10th-ranked San Antonio Spurs. One can’t also count out the fact that Zion Williamson and the New Orleans Pelicans still have a shot in entering the play-in tournament with their record of 26 wins and 33 defeats. De’Aaron Fox and the Sacramento Kings are also just behind the Pelicans with their record of 24 wins against 35 defeats, although it is being reported that the Kings will be without their star point guard for the next couple of weeks due to the league’s safety and health protocols.

So this last stretch of the regular season will be very important for the Warriors, and they cannot afford to have more injuries on their roster. With Thompson already sitting out the whole season, rookie big man James Wiseman also sustained a knee injury that will also force him to take the rest of the season off to recover. On top of that, Damion Lee will also miss the next 10-14 days as compliance to the league’s safety and health protocols. It remains to be seen when the Warriors will expect Eric Paschall to be back as he has been out for a significant period of time due to a hip injury.

During the game against the Wizards in which they lost by four points, Warriors head coach Steve Kerr pointed out to the fact that he felt that his players were already tired and exhausted. So it was not a surprise for him to see Curry struggle a bit with his shooting, especially after the incredible yet exhausting scoring streak that he just produced in the last couple of weeks.

Still, Kerr could not help but be amazed by how Curry is still putting up all these incredible scoring outputs each and every night. Kerr emphasized that the reason behind that brilliance is Curry’s tremendous work ethic that he has been able to sustain even at this stage of his very illustrious career.

"I thought the Wizards played well defensively," Kerr said. "Did some good things  to get the ball out of Steph's hands. But nothing that Steph hasn't seen before. I thought we were gassed. I thought that included Steph and everybody -- we just didn't look like we had our legs out there tonight.

It looks like magic, but it comes from a great combination of genes and work," Kerr said. "There's no doubting that he comes from an incredible set of genes, given his parents being so athletic. Obviously, Dell was one of the great shooters    in the history of the game, and you see Seth, also one of the best shooters in the league; so there's some genetics there, but the work ethic is what puts Steph over the top."

There is also the fact that Curry is quickly climbing in different MVP ladders. His recent scoring outburst certainly has put his name in that conversation, especially if the Warriors finish the regular season with a record that would position them for a coveted ticket in the more important games of the playoffs.

However, it is also true that Curry faces a tough opposition in winning that coveted MVP award. Joel Embiid of the Philadelphia 76ers is currently dominating not just on offense, but also on the defensive end of the floor as well. Embiid, who notched his fourth All-Star selection this season, is currently putting up a tremendous stat line of 30.0 points, 11.1 rebounds, 3.1 assists, 1.0 steals and 1.4 blocks per contest.

And then there is Nikola Jokic, who has been producing a stellar performance for the Denver Nuggets this season. The Serbian big man is tallying impressive numbers of 26.3 points, 10.9 rebounds, 8.7 assists and 1.4 steals, all of which are his career-highs. Jokic was already good in the past couple of years, but he has taken his brilliance to another level. If the Jamal Murray-less Nuggets rack up the wins in this last stretch of the regular season, Jokic’s case for the MVP plum will get even stronger.

But as per Marcus Thompson II of The Athletic, he emphasized that Curry is putting up a season that is even better than an MVP trophy. Thompson compared Curry’s performance this season as to that of the brilliant season performances of Michael Jordan, Kobe Bryant and LeBron James.

Years from now, basketball fans should be able to look up this year and see Jokic  or somebody as MVP, see the Warriors’ record as mediocre, and have the context of what happened completely lost in the data. But those who are here for this will remember the spectacle being experienced, a level of brilliance that makes adjectives shy. The greatness of this Curry season should be the privilege of those present.

After their recent win against Jokic and the Nuggets, the Warriors will close their three-game home stand with games against Buddy Hield and the Sacramento Kings, followed by a match-up against Luka Doncic and the Dallas Mavericks.

After that home stand, Curry and the Warriors will then embark on a four-game road trip that will feature games against Karl-Anthony Towns and the Minnesota Timberwolves, John Wall and the Houston Rockets, and a two-game mini series against Zion Williamson and the New Orleans Pelicans.