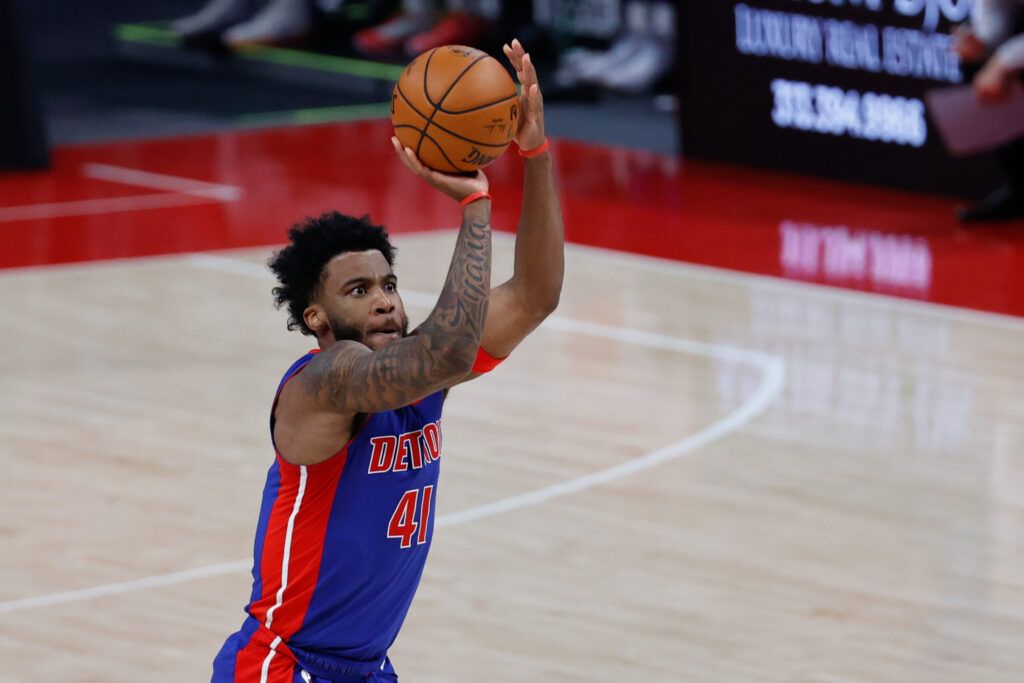 The Detroit Pistons have truly found a gem of a catch in rookie swingman Saddiq Bey. The 21-year old rookie has been scorching hot in his past few games, earning himself the coveted Eastern Conference Player of the Week honors as he was a vital cog in the Pistons’ two wins against the Boston Celtics and the New Orleans Pelicans.

In a tough match-up against two stars like Jaylen Brown and Jaylen Tatum, it was the rookie who stole the show. Bey came through with a team-high 30 points off the bench, while also adding 12 rebounds to his tally, also a team-high that night. Bey only missed twice in his 12 attempts, and made a scintillating 7-7 perfect clip from beyond the arc.

He also made a perfect 3-3 clip from the free throw line in that same game, and did not commit even a single turnover. That kind of elite efficiency is something that you do not see often from a first-year player, and that is the main reason why the NBA gave the weekly individual plum to the Pistons’ prized rookie.

After that 30-point performance, Bey broke a couple of records. He became the first Pistons rookie to put up at least 30 markers since Kentavious Caldwell-Pope in 2014, and his seven made three-pointers was also a franchise record for a first year player.

But even with this kind of stellar performance, Bey emphasized the importance of staying humble and staying focused on his individual goals, and also his team’s collective goals. As per Keith Langlois of NBA.com, the Pistons rookie also talked about the importance of helping a storied franchise get back on its feet and rack up the wins again.

“I’m more happy about the win, for sure,” said Bey, who practically recoils when forced to talk about himself. “This is a blessing, to be able to play this game each and every day for a living. I try to stay even-keeled as much as possible. That’s kind of the mentality I have because there’s so many games.

It means a lot. This is a storied franchise, man,” Bey said of setting the Pistons record for triples in a game by a rookie. “Honored and blessed, but I know I’ve got to keep working and get better each and evdery day to try to help this team win and just be the best player I can possibly be.”

Bey, a Villanova product, was the 19th selection in the recent NBA Draft. He was projected to be a lottery pick, so the Pistons were definitely lucky to see his name slide down to the time when they were about to make their selection. Bey spent two productive seasons with Villanova as he established himself as one of the best young long range shooters in the country.

Bey only put up 8.2 points and 5.1 rebounds in his first year with Villanova, but he bounced back nicely in his sophomore year. Bey improved to an all-around stat line of 16.1 points, 4.7 boards and 2.4 assists per contest. He also shot an excellent 45%  clip from beyond the arc.

“Bey has an unusually low release, but his footwork is rock solid and he’s able to get it away relatively quickly. And at 6-7, he has a bit more margin for getting shots away than smaller wings. For instance, check out the last of his seven 3s Friday against Boston, a late-clock game- icer, and note how quickly he gets this sucker away to beat a contest  from Grant Williams.

The more compelling part of Bey’s 3-and-D package, however, is his             ability to hold up in switches against smaller players at the defensive           end. The one standout feature from his game film on Villanova, (as I noted pre-draft), was how many guards made fools of themselves trying to take Bey on switches. His steady feet have carried over to the NBA.”

So on top of Bey’s ability to put the ball into the hoop, he also has the potential to be a 3-and-D stalwart, and probably a two-way star down the road. He is a 6-foot-7 forward, and that length will help him guard all four positions in today’s pace-and-space and positionless basketball.

But this string of brilliant performances does not mean that Bey is just cruising through his rookie season. He struggled a couple of weeks ago, the reason why he is just averaging 9.1 points per game. But Bey was able to maintain his confidence, and this resilient approach to the game will certainly help him create a name in the league.

“Bey’s best performance came against the Celtics on Feb. 12 where he set   a Pistons rookie record with seven triples made. He scored a career-high 30 points going 10 of 12 overall to go along with his seven shots from three. He pulled down 12 rebounds to end the night with his second career double-double.

He became the only rookie in NBA history to make seven threes in a game   without a miss and became the fourth rookie in NBA history with at  least 30 points and seven three-pointers. Bey joins a list that includes Jason Kidd, Stephen Curry and Lauri Markkanen. He also became the fourth Pistons rookie to score at least 30 points in a game over the last 35 seasons and the first since Kentavious Caldwell-Pope did so in  2014. The other Pistons rookies to score 30 or more points in a single game along with Bey and Caldwell-Pope are Grant Hill and Allan  Houston.”

The crazy thing about Bey’s recent string of brilliant nights is that he was not even the Pistons’ most coveted rookie entering the season. That title belonged to the young Killian Hayes, a lefty French point guard who garnered tons of attention and high expectations even if he did not play college ball in the US.

However, Hayes struggled mightily in his first few games with the Pistons. He produced 4.6 points and 3.6 assists on a high turnover count of 2.4 per contest. His lowly 27%  overall shooting clip from the field was abysmal, and it did not help that he suffered a major hip injury that will force him to miss at least two months.

James L. Edwards III of The Athletic recently pointed out that he is not surprised with Hayes’ struggles, especially if one looks on the fact that the 6-foot-5 playmaker is not that athletically-gifted as the other players in the NBA. Edwards also reiterated that Hayes could have felts tons of pressure from the fact that he was immediately inserted to a starting role for the team.

“For reference, I was not quite as high on Hayes as the Pistons were. I had him down at No. 10 on my pre-draft board, and would have taken Tyrese Haliburton ahead of him (as I said at the time of the selection). I  worry about his ability to separate consistently against NBA athleticism, length and talent as a lead, then also worry about his ability to shoot consistently in order to play as a secondary guy. So yeah, I’m not particularly surprised that was struggling early on.

In general, teenage point guards have it tough in the NBA. They suffer  the most from the adjustment in terms of speed of the game because they’re the players responsible for making rapid decisions on the fly most often. And of course, last season was his first time playing as a  true lead guard for a high-level team in Europe. I know fan engagement is a real thing, but I kind of think the Pistons did a real disservice just handing him the keys to the offense from Day 1 and telling him to run with it, ESPECIALLY given the shortened training camp and preseason games.”

The Pistons, who are currently riding a mini two-game winning streak in the Eastern Conference, will go up against DeMar DeRozan and the San Antonio Spurs to close out their two-game home stand. They will then have their next five assignments on the road as they face the Dallas Mavericks, the Memphis Grizzlies, two straight games against the Orlando Magic and the New Orleans Pelicans.