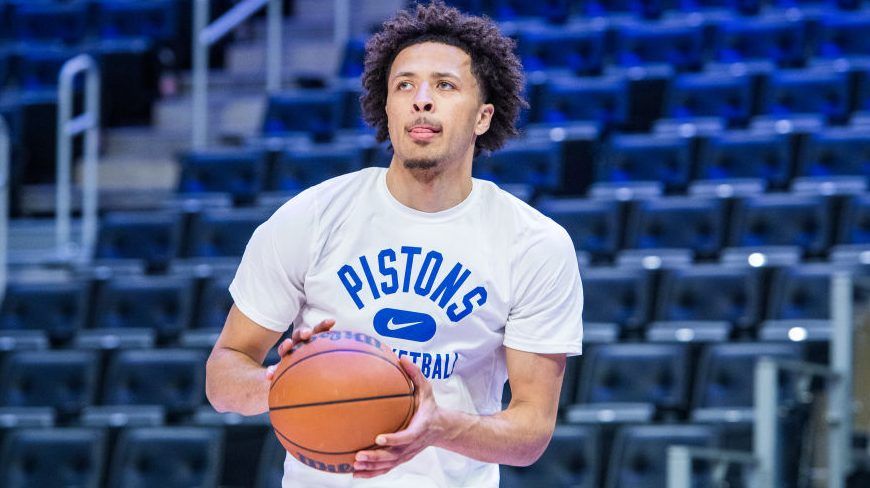 Cunningham makes debut for the Pistons

The top overall pick in the 2021 NBA Draft has finally surfaced on the hard court. After missing the team’s first four games to start the 2021-22 NBA Season, Detroit Pistons prized rookie point guard Cade Cunningham finally made his debut, although it was indeed a very quiet outing. Cunningham, the top overall pick in the recent 2021 NBA Draft, logged almost 19 minutes in his first professional game and finished with a stat line of 2 points, 7 rebounds, 2 assists, and 1 block, while missing seven of his eight total field goal attempts and missing all of his five attempts from the three-point line.

The silver lining in his quiet debut was that the Pistons won their first game of the season. They lost their first four games, with two losses coming at the hands of Zach LaVine, DeMar DeRozan, Lonzo Ball, Nikola Vucevic and the Chicago Bulls, a loss to Trae Young, John Collins, and the Atlanta Hawks, and another one at the hands of Joel Embiid, Tobias Harris, Tyrese Maxey, and the Philadelphia 76ers.

Jerami Grant, who was one of the most improved players in the previous season, led the charge for the Pistons as he tallied 22 points, 7 rebounds, 5 assists, and 1 steal. Veteran combo big man Kelly Olynyk came off the bench to put up an all-around stat line of 18 points, 6 rebounds, 4 assists, 3 steals, and 2 blocks. Other players who scored double digits for the Pistons are Saddiq Bey and Josh Jackson with 13 markers, Trey Lyles with 12 markers, and Isaiah Stewart and Cory Joseph with 11 markers.

As per a column written by Eric Woodyard for the ESPN, Cunningham pointed out that even though he struggled with his offense, he felt that he did a solid job on the defensive end of the floor. That is indeed true, and the fact that he moved so well on the court means that he is on his way to completely recovering from the sprained ankle injury that he suffered during the team’s training camp.

"I think it was good. I feel like coming in, just being able to make some plays off the ball, get some rebounds. I felt like I was solid defensively. And, I mean those are the points that I really wanted to come out and just prove to myself that my ankle was straight and that I could move, guard and do everything else. So, I got all the jitters out now and now I can just go play free. I wouldn't say it was anything I didn't envision or I couldn't imagine it being like. But, whenever you step out there, it's always different than what you might've had in your head as far as once you get out there, all the time you spent trying to prepare your mind for it, once you get out there, you're still gonna feel the over-excitement of just wanting to play.

You don't have to listen to everything. I mean, they could say it, but  it's all about if I put my ears to it and really let it resonate with me. I try to keep my energy in the right place. I try to keep my head in the right place and so, my team, they know what they expect out of me, I know what I expect out of me, so that's all that's really mattering to me. People can say whatever they want, outside  of that, but I probably won't hear it."

Cunningham, who just turned 20 years of age last September, was a highly touted prospect coming out of college. With a lengthy 6-foot-8 frame and the mobility and skill set of a point guard, it is without a doubt that Cunningham is poised to be a high-impact star in the positionless and pace and space game in the NBA nowadays.

During his lone year in Oklahoma State, Cunningham put up a tremendous all-around stat line of 20.1 points, 6.2 rebounds, 3.5 assists, 1.6 steals, and 0.8 blocks per game, while producing a decent set of shooting percentages that include a 44% overall clip from the field, a stellar 40% clip from beyond the arc, and an efficient 85% clip from the free throw line.

Coming out of high school, Cunningham was advertised as someone who could prove to be of utmost value on both ends of the floor. He exceeded all those expectations in college as he proved that he is not just a great defender, but he can also score and facilitate, which essentially helps him to become an effective anchor for Oklahoma State on both offense and defense. As per Jonathan Tjarks of The Ringer, he pointed out that Cunningham may be a deliberate player, but it is also true that he can play more than one role.

Cunningham is a more deliberate player who loves to probe the    defense and then kick the ball back out. The upside of that approach is that he’s not forcing up shots early in possessions and preventing teammates from getting in a rhythm. The downside is that he rarely takes over games on offense or puts his team on his back. He scored more than 30 points only once last season. He’s  more of a traditional point guard in that he can dominate the ball without taking a lot of shots. But Cunningham also showed in Vegas that he can play more than one way. Cade can give up control of the offense and succeed in a smaller role in which he plays off the ball and bombs away from deep. His stats from three summer league games don’t mean much by themselves—what’s interesting is how they compare to his numbers from college. His per-game assist average dropped to 2.3 while his 3-point attempts jumped from 5.7 to 8.7.

The question is whether playing off the ball is something he wants to do in the NBA. Or, more specifically, in Detroit. It would be one thing if Cunningham had landed on a team ready to compete at a  high level. He would have been great next to Steph Curry and Draymond Green if Golden State had won the lottery. It’s even possible to imagine him accepting a more complementary role on an up-and-coming team like Minnesota, playing off of elite talent in Karl-Anthony Towns and Anthony Edwards. Detroit doesn’t have anyone like that. There’s no one whom Cade should sacrifice for.

After their recent 110-103 victory over the Magic, Cunningham and the Pistons will travel to Brooklyn to go up against Kevin Durant, James Harden, Blake Griffin, LaMarcus Aldridge and the powerhouse Nets squad. It will be just a short trip on the road as the Pistons will be going back to Detroit for a three-game home stand.

That home stand will feature tough games against the perennial contenders in the Eastern Conference. The first game will be against Giannis Antetokounmpo, Khris Middleton, Jrue Holiday and the defending champions Milwaukee Bucks. The second game will be against Embiid and the 76ers, followed by another matchup against Durant, Harden, and the Nets.