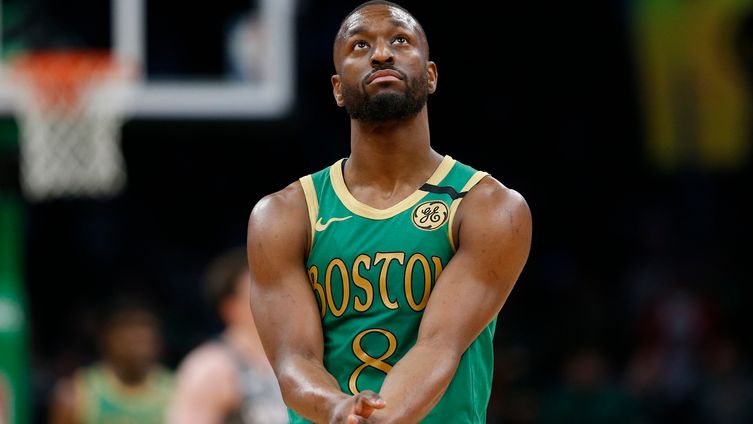 Boston Celtics head coach Brad Stevens reassures the team’s fans that there’s nothing to worry about Kemba Walker’s health. Stevens emphasized that the All-Star point guard recently ramped up his workout activity for the first time.

Walker, who notched his fourth All-Star appearance this season, has been playing through a bothersome knee even before the NBA suspended the games last March. In a column written by Chris Forsberg of NBC Sports Boston, Stevens said that the scoring guard has been doing a “lot more over the last few days.” Forsberg would also note that Kemba indeed did not participate in the team’s first several practices.

"With regard to Kemba getting back into it, I think ‘worrying' is a strong word," said Stevens. "I think there's a lot more to worry about in the world right now so, when he gets back, we'll get him as acclimated as we can. I don't think it'll be as fluid in our first scrimmage, or whatever the case may be, as maybe three weeks from now. But there's time to do that. He practiced the first 50 minutes of today's practice, so he's done a lot more over the last few days.”

Walker sat out Boston's early practice sessions while strengthening his knee during the Celtics' first days in Orlando. Walker, during his first Bubble chat with reporters Friday, admitted he experienced pain in the side of his knee during initial individual workouts in Boston but likewise downplayed concern after going through a portion of the team's practice that day.

It’s also worth noting that Walker is also logging in 31.8 minutes per game this season, his lowest since his rookie year during the 2011-12 NBA campaign. Of course, that could be an effect of the depth of this Boston Celtics squad. Despite this, Walker is still norming an all-around stat line of 21.2 points, 4.1 rebounds, 4.9 assists and 0.9 steals per game.

Going back to the season resumption, Stevens also said more than a week ago that they will be managing Walker’s workload in the first few games. It’s not a reason for heavy concern, and it’s understandable why the team would want Kemba’s knees to be fresh and fully-healthy in time for the big games in the playoffs. They can’t forget that players didn’t have access to practice facilities for more than three months, so their conditioning shouldn’t be rushed.

In that same article written by Forsberg, Celtics big man Enes Kanter gave a positive insight regarding their preparations for the restart. Kanter pointed out how fun and competitive the practices are, and it’s all about them pushing each other to be better individually and collectively.

"This is my ninth year in the league. Probably the last practice we had, we had an off- day [Saturday], but the day before was one of the best practices I have ever witnessed. Everybody was talking, everybody was going against each other, everybody was pushing each other but, at the same time, we were learning and we were having fun,  and a lot of the trash talk out there, but it's good, though.

[Sunday's] practice was also really good because we were having fun, played hard, played smart, having fun, and just going at each other at the same time. The important thing is that we are communicating and trusting each other, so it's been great fun."

Walker, Kanter and the rest of the Celtics squad will have a tough first assignment in the Orlando bubble as they will be going up against reigning MVP Giannis Antetokounmpo and the league-leading Milwaukee Bucks on August 1. That will be followed by games against the Portland Trail Blazers, Miami Heat, Brooklyn Nets, Toronto Raptors, Orlando Magic, Memphis Grizzlies and the Washington Wizards.

The race for the Most Valuable Player award is arguably down to two players this season. Milwaukee Bucks’ Giannis Antetokounmpo could be on his way to bagging two individual plums – the MVP and the Defensive Player of the Year. With his elite two-way versatility, he has been the Bucks’ anchor on both ends of the floor.

And then there’s the 35-year old LeBron James, the point guard/forward of the Western Conference frontrunners Los Angeles Lakers. He is still scoring and rebounding at a high rate of 25.7 points and 7.9 boards, but James is also compiling a career-best 10.6 assists in his second year with the Lakers.

Some experts say that the race isn’t as close as what fans think. Giannis’ leadership on both offense and defense makes him the frontrunner for the MVP race, although there are others who bring up LeBron’s case through his playmaking and overall efficiency. Having said that, the NBA recently announced they the criteria for choosing individual awards will be the games that each team had until the season suspension last March.

It means that even if James will put up 50-point performances in the season resumption, those won’t help his case for winning his potential 5thMVP trophy. But as for the three-time NBA champion, he couldn’t care less. As per ESPN’s Dave McMenamin, James said that he’s not disappointed with the league’s decision. “The King” also reiterated that his priority this season has always been on bringing the Larry O’Brien trophy back to the Lakers’ lore.

"I'm not disappointed because things happen. You control what you can control, and I can't control that. As far as the MVP race, I think that I've shown what I'm capable of doing. Not only individually but from a team's perspective, us being No. 1 in the West. There was a lot of conversation about, 'LeBron can do those things in the East, but if he ever came to the West, what could he do?' So I heard all of that. To be able to have our team at the top of the Western Conference and playing the way that we were playing at that time and the way I was playing, it's definitely a good feeling.

I think those awards are always great throughout this time of year, to acknowledge  the individuals that have had great years. Not only from a player's perspective but for a coach's perspective, as well. So we'll see what happens."

It seems like James has always been in MVP conversations since he won his first in 2009 when he was still playing for the Cleveland Cavaliers. But it doesn’t take away the fact that Antetokounmpo clearly deserves the award too. The Greek Freak is averaging a double-double stat line of 29.6 points and 13.7 boards, along with 5.8 assists, 1.0 steals and 1.0 blocks per contest.

However, Lakers head coach Frank Vogel reiterated his belief that it is his star forward who should bag the award. In just his first year with the Lakeshow, Vogel has steered the purple-and-gold squad to an excellent record of 49 wins against 14 defeats. As per Melissa Rohlin of Sports Illustrated, Vogel points out to James’ underrated yet top-notch defensive performance this season as something that pundits can look to as a solid case for the Lakers star to win the MVP.

"In that weekend, LeBron took the toughest assignment in both games. He guarded Kawhi [Leonard] in the Clippers game and did a great job with him there. And then he guarded Giannis [Antetokounmpo] in the Bucks game when AD was in foul trouble and did a great job in those two situations. I feel like after what he’s able to do on the defensive end, combined with the dominance that he exhibits with not just scoring the ball, assisting the ball, but orchestrating our offense, leading us on the break, I think that weekend was probably a great indicator or a great measuring stick to those two awards."

James, Anthony Davis and the Lakers will face hometown rivals Los Angeles Clippers in the first night of the NBA’s season resumption at the Orlando bubble.

After putting up 18.7 points, 5.5 rebounds and 2.5 assists in just his second year in the NBA last season, people expected tons of more improvement from Los Angeles Lakers young budding forward Kyle Kuzma. However, Kuzma regressed this season as his production declined to only 12.5 points, while his three-point shooting spiralled downward to a 29% rate.

Still, there’s no denying that Kuzma has talent oozing over his potential. Lakers head coach Frank Vogel expressed his excitement how locked in Kuzma is right now, and even went on to say that he has been dominating the team’s scrimmages. Vogel talked to reporters after last Monday’s practice, and had heaps of praises for his young gunner. (h/t Christian Rivas of SB Nation’s Silver Screen & Roll)

“He’s had a couple of stretches where he’s dominated the floor and it’s been really encouraging to see. He had some inconsistency with the beginning of our season because he dealt with three different injuries that really prohibited him from getting his legs under him.

The shot-making wasn’t always there, but it’s been there at a very high level during this restart, and we’re very encouraged and excited about what having a real training camp, or a healthy training camp could mean for him. Hopefully that leads to an increased role and gives us that boost that we’re looking for.”

With LeBron James and Anthony Davis at the helm, the Lakers also need Kuzma to step up and be the team’s third star. Veteran guard and three-time Sixth Man of the Year Jamal Crawford said that Kuz is the Lakers’ X-factor on their potential championship run.

Kuzma’s high potential is not just because of all the hype he is getting. It’s worth remembering that Team USA coach Gregg Popovich selected him to be in the roster pool for the 2019 FIBA World Cup last summer. All signs pointed towards Kuzma securing a roster spot, but an ankle injury derailed this golden opportunity.

It remains to be seen if Kuzma can become the All-Star the team wants him to be, but Vogel is not worrying about. The Lakers head coach reiterated that playing behind two superstars in James and Davis provided Kuzma the opportunity to “round out his game.”

“Obviously he can get a lot better — he’s a young player, but he brings a lot to the table right now. And he’s in a difficult predicament, because a lot of his counterparts at his age that are on teams without established superstars are getting bigger roles, and he certainly is capable of that, but his role is going to be different on this team. And he’s had great acceptance of trying to find ways to contribute to winning basketball and has had a great attitude about it.

It’s actually helped him to round out his game so to speak, rather than just focusing on scoring. The defense, the rebounding, the hustle plays that maybe you’re not focused on as much if you’re the young focal point of an offense. So I think in the long run this is really going to help his career.”

Along with LeBron, AD and Kuzma, the Lakers will be fielding in a veteran supporting cast that includes quality role players like Danny Green, JR Smith, JaVale McGee, and Dwight Howard. Avery Bradley has opted to sit out the restart, and Rajon Rondo sustained a thumb injury that will keep him out for at least six weeks. But that’s where the Lakers’ depth will enter the picture, as guard Alex Caruso and Dion Waiters could fill in for those two absences.