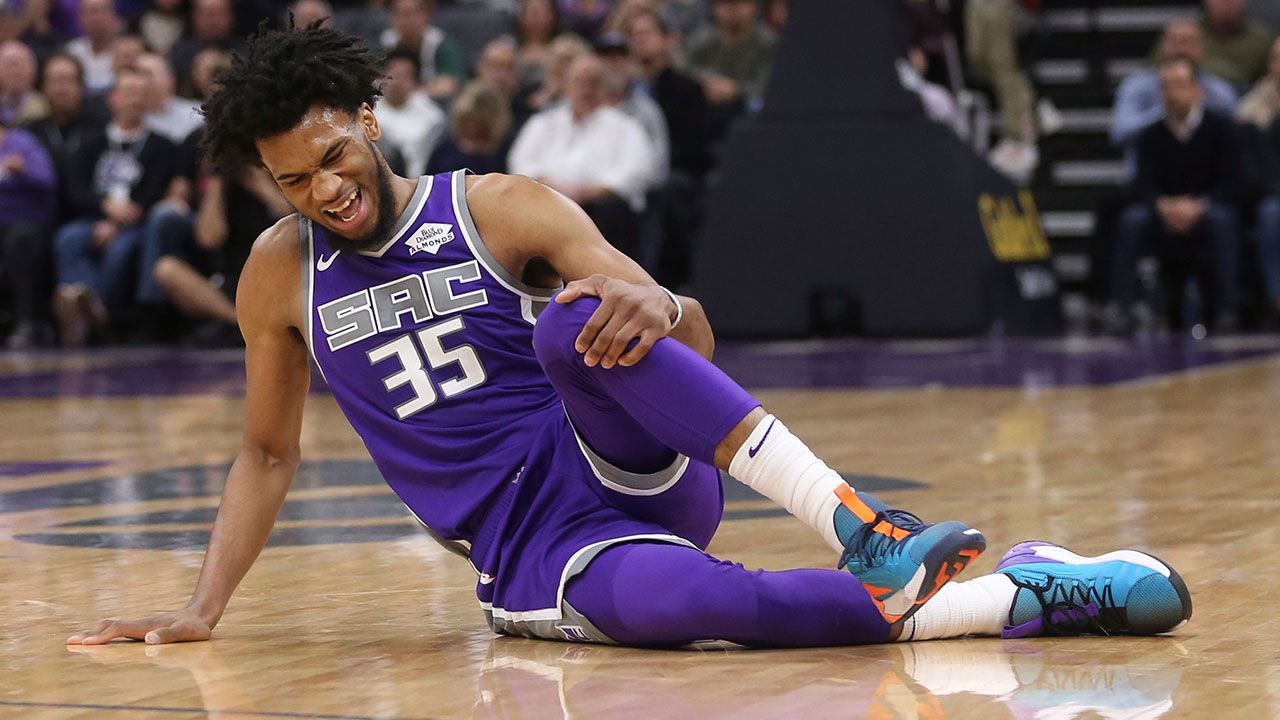 NBA Season Restart: Injured Bagley Officially Out For The Rest Of The Season Resumption

Sacramento Kings’ sophomore power forward Marvin Bagley III will miss the rest of the season due to a right foot injury. The lefty big man sustained the injury during practice, and MRI results confirm fears that he will not be able to play again in the season restart at the Orlando bubble.

The Kings organization released a statement on this unfortunate development. It has been an injury-hounded season for the young talented Bagley as he has appeared on a grand total of 13 games for the Kings this year.

“During an intra-squad scrimmage on July 19, Kings forward Marvin Bagley III sustained a right foot injury. Evaluation of his MRI results by a foot specialist today confirmed a lateral right foot sprain. The team has decided to hold Bagley III out for the remainder of the season. He is expected to make a full recovery.”

Last season, Bagley was able to show his potential as he normed 14.9 points, 7.6 rebounds and 1.0 blocks during his rookie year. It’s clear to everyone that he has a multi-dimensional offense packed in his skill set, a great attribute to have in today’s pace-and-space game. Even with his 6-foot-11 length, he is mobile on his feet and can step out the paint for mid-range jumpers.

Bagley is still very young at 21 years of age, and there is no doubt that he has the potential to possibly notch an All-Star appearance in the future. It’s also important to note that he was mostly healthy last season as he logged in 62 games for the team. This year is just a disappointing setback for him, especially considering that he and his young Kings teammates were expected to break out and book a playoff spot.

So, what’s next for the sophomore big man? James Ham of NBC Sports emphasized that Bagley actually added 10 pounds of muscle during the hiatus, an obvious effort to prepare his body for playing the center spot for the Kings. Ham reiterated that there is nothing to worry about Bagley’s long-term health.

“Kings big man Marvin Bagley did everything right during the NBA’s shutdown. Bagley worked hard with his dad and two brothers. He gained 10 pounds of muscle. The 21-year-old had a workout partner to battle in the post and clearly got stronger knowing that he was likely to play center moving forward. In the short term, none of that matters now. A bad step in practice Sunday cost Bagley the remainder of the 2019-20 season, however long that will last for Sacramento.

Bagley goes back to square one. He eventually will be cleared to restart basketball- related activities, but it will be well after the season ends. Hopefully, he will be able to continue his workouts with a focus on his upper body and core. The reality for the Kings is that Bagley’s season ended Jan. 20, when he reinjured his other foot while playing 38 minutes in a loss to the Miami Heat. He played in just 13 games in what now is a completely lost season for the No. 2 overall pick in the 2018 NBA Draft.”

Without Bagley, the Kings are now depleted on all fronts. Veteran small forward Harrison Barnes is still not with the team at Orlando after testing positive for COVID-19, while athletic center Richaun Holmes was put into self-quarantine after violating the league’s safety protocols at the bubble.

But the good news is that the team may have their starting point guard back in time for the official start of the regular season games. De’Aaron Fox injured his ankle last week, prompting the Kings to announce that the speedy guard will be re-evaluated after 7-10 days.

However, it is becoming apparent that a Fox comeback may be sooner that what we expected. As per a separate column written by Ham for NBC Sports, Kings head coach Luke Walton revealed that Fox actually went hard during yesterday’s practice. This is great news for Kings fans, as the team cannot afford losing Fox’s leadership on both ends of the court.

“We’re very hopeful that he’ll be ready for game one. He looks good. We pushed him pretty hard yesterday in practice, and he didn’t have any setbacks in how he felt when he woke up today.

I’m pleasantly surprised how good he’s looked since the short amount of time he’s been back. I was a little concerned -- that much time by yourself, not playing basketball, not running, not jumping -- that he’d be a little further behind, but he looks good.”

Fox and the Kings will have their first seeding game against DeMar DeRozan and the San Antonio Spurs on August 1. That will be followed with match-ups against the Orlando Magic, Dallas Mavericks, New Orleans Pelicans, Brooklyn Nets, Houston Rockets, and the Los Angeles Lakers.

The Minnesota Timberwolves could be facing a brand new era soon. In a column jointly written by The Athletic writers Jon Krawczynski and Shams Charania, Wolves long-time team owner Glen Taylor revealed that he is now open to selling the franchise, although there is one great condition. The buyer should be sure not to relocate the franchise, and the Timberwolves will stay in the city of Minnesota.

Krawczynski and Charania also pointed out that this is not the first time that the 79-year old business tycoon is trying to sell the team. Before today, Taylor tried to bring in a new owner twice, suggesting that this has been long time coming for Taylor and his people.

“That was the basis for their conversations in 2013 that birthed a reunion between Taylor and Saunders and re-instilled the family atmosphere that Taylor always preferred with his team. At the press conference introducing the former coach as the   new team president, Saunders recounted how he could tell that Taylor wasn’t ready   to give up just yet. Saunders joined the ownership group with a small piece of the pie  and Taylor also announced that day that he was not only taking his team off the market, but he was buying out some of his limited partners to strengthen his hold on the team.

Two years later, Taylor again explored the idea of selling the team when Steve Kaplan, a minority owner with the Memphis Grizzlies at the time, made a strong push to buy 30 percent of the team initially with a plan to eventually take over the majority share of the franchise from Taylor. But as the talks progressed, Taylor started to have doubts once again. Kaplan was having a difficult time extricating himself from the Grizzlies and was constantly bringing new members into his group.  And with the team reeling from Saunders’ death and being led by an interim general          manager in Milt Newton and an interim coach in Sam Mitchell, Taylor felt like the organization was in too much disarray to foist onto someone else.”

It’s no secret that the Timberwolves have been struggling to be successful on the court. After reaching the Western Conference Finals in 2004, the team has been to the playoffs only once ever since. Kevin Garnett, the long-time face of the franchise, left the team and joined the Boston Celtics in that widely-documented summer of 2007.

When they did make the playoffs in 2018, the team exited early in the first round. Then the Jimmy Butler fiasco went down during the 2018 offseason, leading to the team trading Butler and firing head coach Tom Thibodeau. The Wolves front office then installed Ryan Saunders to the coaching job, the son of a famous Wolves figure, the late Flip Saunders.

It is also mentioned in the report that another factor in this decision to finally sell the franchise is the fact that Taylor’s other business ventures are currently struggling during this global pandemic.

“Now Taylor is again considering selling the team, but the feeling is much different this time. He is concerned about his other businesses that have been struggling during the COVID-19 pandemic. He is confident that with CEO Ethan Casson,  president of basketball operations Gersson Rosas and coach Ryan Saunders leading the way, the Timberwolves’ basketball and business operations are on stable footing  for the first time in years. And at 79 years old, the man who rescued the Wolves from extinction back in 1994 wants to make sure his fiscal house is in order so he doesn’t put any undue pressure on his family after he is gone.

Perhaps for the first time in 26 years at the helm of the franchise, Glen Taylor appears to be comfortable with the idea of letting go of something he has loved for so long.”

Having said that, it’s expected that there will be a number of bidders for the franchise. Despite the fact that the team is sporting a measly record of 19 wins against 45 defeats this season, the Wolves now have a 1-2 star punch in Karl-Anthony Towns and D’Angelo Russell. They also acquired quality role players like Malik Beasley and James Johnson, and it’s also important to note that they could land a top overall selection in this year’s draft.

On another interesting development in this matter, among the early bidders for the ownership of the franchise is Garnett. Since it was reported that Taylor is now considering buyers, the former NBA champion has been publicly voicing out his desire to buy the team and lead the franchise to greater heights. Garnett tweeted out his plans to potentially have a stake at the franchise, and work with Taylor in ensuring the bright future of the team.

“My passion for the Minnesota Timberwolves to be a championship team is well known but I have a deeper affection for the city of Minneapolis,” began Garnett. “I once again want to see Minneapolis as the diverse and loving community that I know it is. No two people love the city more than myself and Glen Taylor and I look forward to trying to work with him to achieve my dream.”

While it does not come as a surprise that Garnett is reserving a place in the bidding wars, it’s interesting to see how well he would work with Taylor. Garnett and Taylor had a falling out years ago, so it remains to be seen if Taylor would indeed strongly consider the former All-Star’s case for buying the franchise.