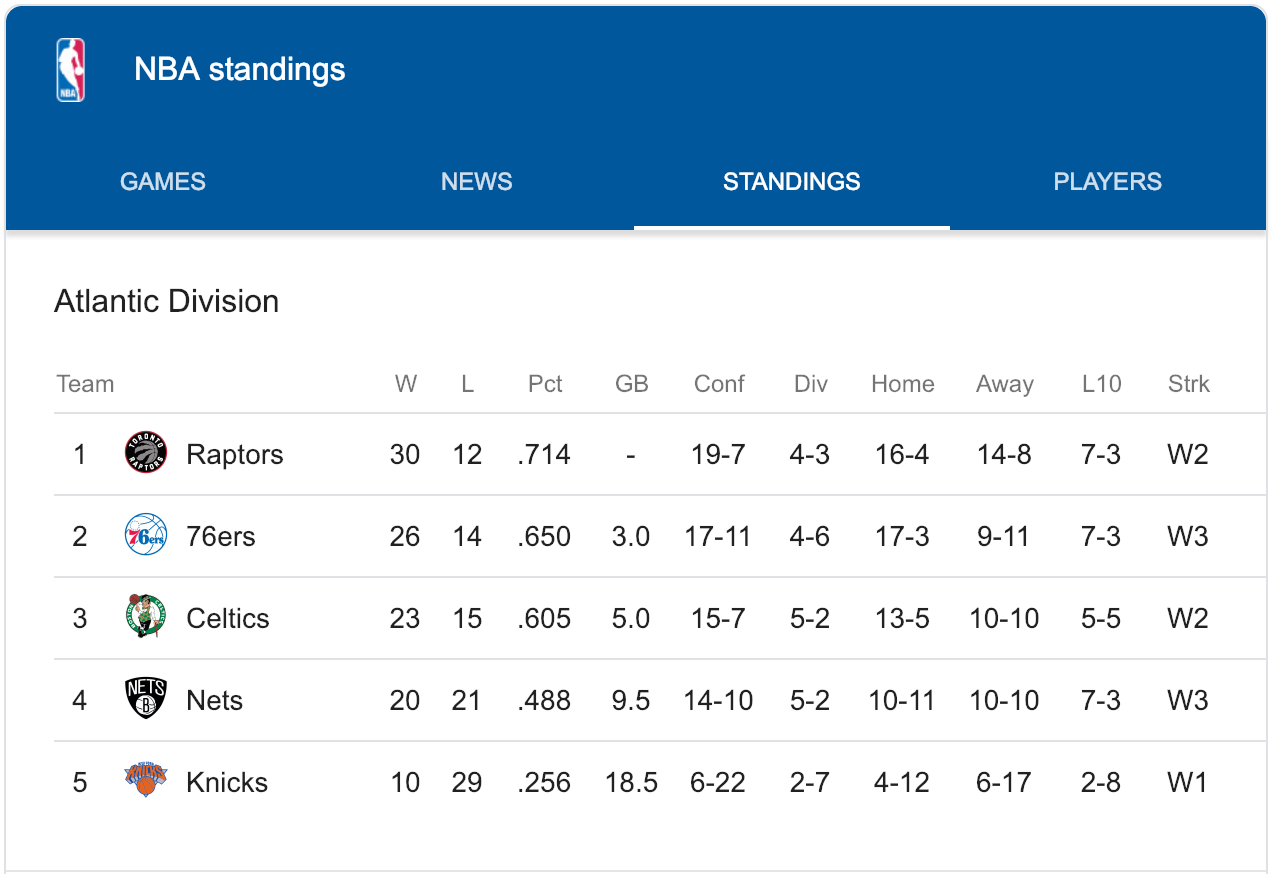 With the exception of the New York Knicks, the Atlantic Division teams have been superb at this point of the season. With Toronto leading the pack, there’s still ample room for Philadelphia and Boston to catch up with the Raptors. Brooklyn has surprised people with an average record so far, while the Knicks are still hunting for another lottery pick.

With the new year now upon us, here are some points of improvements for each team in the Atlantic Division.

It’s really hard to think of a resolution for a team that is running smoothly on both ends of the floor. With new superstar acquisition Kawhi Leonard playing above expectations with a stat line of 27.3 points and 8.2 rebounds per game, it’s safe to assume that the Raptors will finish the regular season with a home-court advantage in the first two rounds of the playoffs.

Head coach Nick Nurse is doing a brilliant job juggling minutes in his stacked rotation, with Pascal Siakam (14.9 ppg, 6.6rpg, 2.7apg) becoming a pleasant surprise for the team. However, long-tenured star Kyle Lowry would still be the key for the Raps’ hopes of going to the Finals for the first time in franchise history.

Despite averaging a career-high in assists with 9.8 dishes per game, Lowry hasn’t been in his usual tenacious and aggressive self on offense. His field goal attempts are in their lowest since 2013, and his three-point shooting percentage is down to 33%, his lowest in the last nine years.

It also doesn’t help that Lowry is sidelined with a lower back injury for some time now. With no timetable for a return, this could spell a problem for him to get going on offense once he comes back. Come playoff time, Kawhi will eventually tire out from carrying most of the scoring load in a seven-game series. If Lowry could throw up more shots and improve his long-range shooting percentage, a Larry O’Brien trophy is up for grabs in Toronto.

It seems like ‘The Process’ will never stop for the Sixers. Despite addressing a dire need for a third superstar to play behind Ben Simmons and Joel Embiid, the Sixers are still yet to be a dominating team in the league, alternating between wins and losses for the past couple of weeks.

The problem is that opposing teams have already figured out the major flaw in the Sixers offense: Simmons’ inability to shoot from the perimeter. It’s the same thing that is hindering Draymond Green to be more effective on offense for the Golden State Warriors. Simmons isn’t really adept in shooting beyond the paint and opposing defenses have been sagging off him while his defender is blocking passing lines or double teaming Embiid and Butler.

Sure, Simmons doesn’t have the good percentages of a good shooter. But we have seen videos of him chunking up successful shots even from beyond the arc during warm-ups and practices. Basketball is always different in in-game situations and limiting Simmons from taking a wide-open jumper could be the factor that is hindering his development on that part of his game.

Even if Simmons makes just a quarter of his mid-range shots, it will keep defenses thinking and on their heels each time out.

Boston Celtics (21-15) – Stop cramming for a permanent rotation. You’ll never get one.

Even if LeBron James didn’t leave the East, the Boston Celtics were primed to dominate the conference this season. With Kyrie Irving and Gordon Hayward coming back after missing the playoffs, there were no doubts that the Brad Stevens-led Celtics will eventually lead the pack.

Despite their key players staying healthy this season, the Celtics are yet to find their groove on both ends of the floor. Hayward’s return has Stevens searching for answers as to who among the team’s bevy of excellent perimeter players are to be inserted to the starting lineup. Hayward, Marcus Smart, Jaylen Brown and Marcus Morris have taken turns in the starting unit with Hayward recently thriving in the sixth man role.

With that said, the Celtics shouldn’t look at this as a disadvantage and instead, view it as a norm. They have been cramming for an identity for the team, but maybe ‘without an identity’ could be their real identity. It will come in handy especially in a playoff series where opposing teams will always play guessing games against the Celtics.

The Nets are hands-down the most pleasant surprise in the Atlantic Division. D’Angelo Russell and Spencer Dinwiddie has provided excellent leadership in the backcourt while Jarrett Allen has grown into an outstanding defensive anchor. On top of that, the team has gotten contributions from their veteran players like Joe Harris, Jared Dudley, and DeMarre Carroll.

A playoff appearance is not far on the horizon for the team and it will be a welcome gift for a Brooklyn fanbase desperate for bragging rights over their hometown rivals in New York. But the team’s worries can be seen down the road as the Nets will have issues to address with their players’ contracts.

Carroll and Kenneth Faried are sporting two of the most lucrative contracts in the team and they will enter unrestricted free agency this year. No problem with them. But with the $18M they still owe to Allen Crabbe next year? That’s the problem that could hinder them from signing big-time free agents in the offseason.

With Russell, and Rondae Hollis-Jefferson set to sign new contracts in the summer, the Nets front office should get creative in dealing with Crabbe. Unless they are willing to let go of either Russell or Spencer Dinwiddie(who they just signed to a $34M,3-year extension), it will be difficult to convince other teams to take up Crabbe’s bloated contract considering that the Nets don’t have any valuable future draft picks to sweeten the deal.

Unless the Knicks are bent on risking Kristaps Porzingis’ health and take on more wins to veer away from a possible Zion Williamson returns, the team should already consider giving the red light on any possible Porzingis comeback this season.

With a 9-29 record and a surefire top-five draft pick, New York is midway through another season of rebuilding. Sure, it’s difficult to tank especially if you have a tough-minded coach in David Fizdale who is very accustomed to winning. But a Porzingis return doesn’t make any sense at this point.

With their sights set on the stacked 2019 free agency, the Knicks front office should also consider trading away Courtney Lee and Tim Hardaway Jr. Hardaway is still owed $18M next year while Lee is guaranteed $12M. The problem is that the Knicks don’t have a valuable asset to go with those two players and it’s hard to imagine them letting go of the likes of Kevin Knox or Mitchell Robinson just to spice up the deal.

Like their rivals in Brooklyn, the Knicks have to get creative here if they don’t want to miss out on signing two max free agents in the summer.