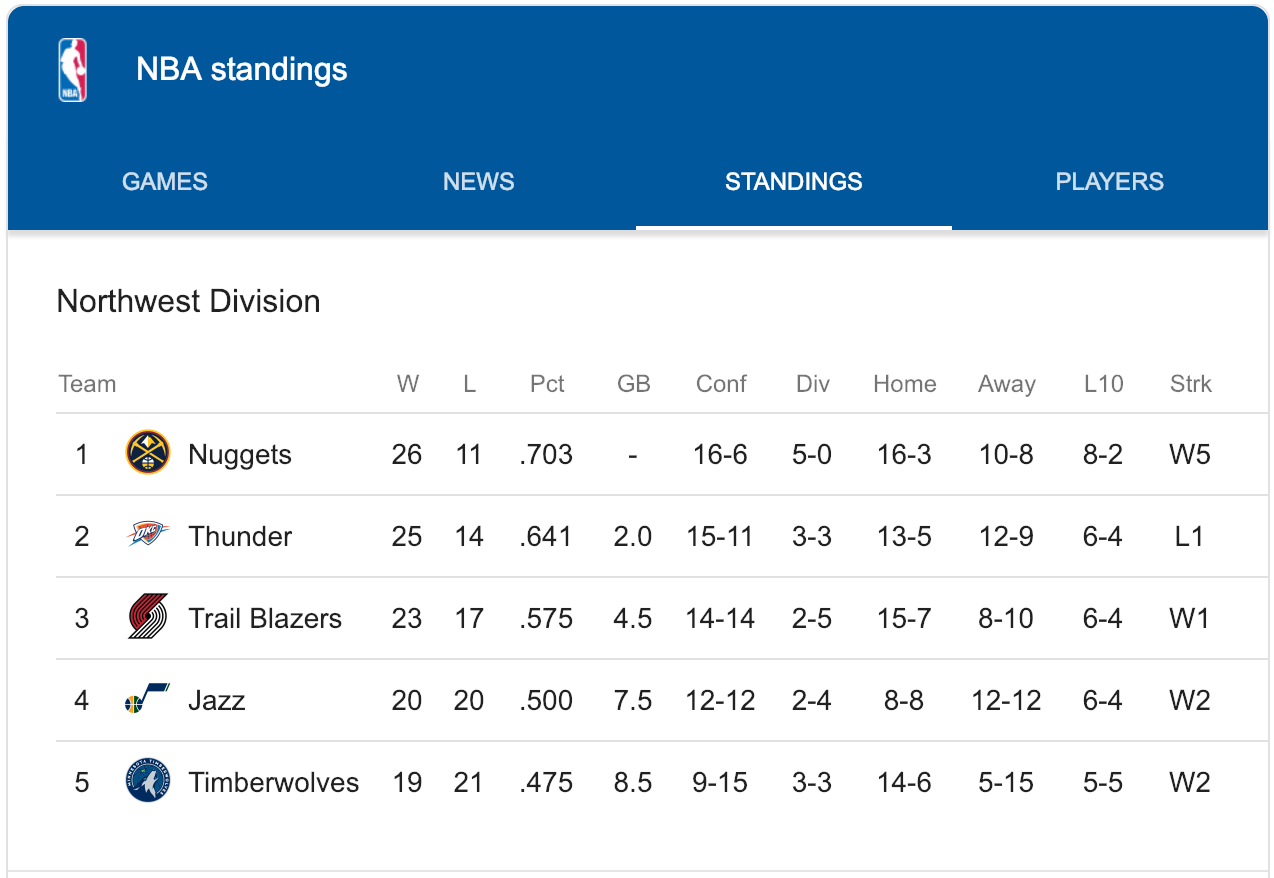 The Northwest Division has been filled with up-and-down surprises across the board, summer and early season roster moves, and outstanding superstars filling the stat sheet with ridiculous numbers.

Claiming the top seed in a stacked Western Conference half-way through the season, the Denver Nuggets have been proving all year long that they belong in the league’s tight circle of elite teams. But the rest of the division have stayed competitive with its lowest-ranked team, the Minnesota Timberwolves, just four games behind a playoff spot.

We look at each Northwest team’s resolution this year and how they can stay in contention for a coveted playoff spot.

Nikola Jokic and the Nuggets have been surpassing all expectations of them before the season began. They aren’t even completely healthy yet, with offseason acquisition Isaiah Thomas, first-round pick Michael Porter Jr and all-around combo forward Will Barton sidelined by major injuries.

But the Nuggets are in a bit of a tricky situation with salary matters. While Mason Plumlee has been a steady frontcourt presence in the team’s second unit, paying another $14M next season for a role player could bite the Nuggets hard in the long run. Young big man Juan Hernangomez is slowly breaking out this season, a modern center who can shoot the lights out from beyond the arc (43%), making Plumlee an expendable.

Still, Plumlee has been the Nuggets’ best rim protector this season. If they can’t get another defending big man in return for Plumlee, they could just let him stay and explore trading him in the offseason.

Another intriguing trade asset that Denver has is the 6-foot-6 Barton. He was supposed to be an integral piece for the team but his injury has limited him to just two games this season. Furthermore, the Nuggets have shown they can win a lot of games without him. Barton is also owed $14M/year until the 2021-22 season so it’s a no-brainer that he could find himself in a deal come the February trade deadline.

Even with Russell Westbrook’s recent struggles with his shooting, the flamboyant All-Star guard is still filling stat sheets from left to right. Paul George, after also going through a drought of his own at the start of the season, is now on his way to arguably one of the most productive seasons of his career. Together with the steady play of center Steven Adams, and a Sixth Man of the Year candidate in Dennis Schroder, the Thunder has climbed to the 3rdspot of the West standings after starting the year with a 0-4 record.

But the Thunder still has a hole to fill, something that could cost them a true shot at a Finals appearance. Aside from George and Jerami Grant, the team’s wing players still has lots of work to do before they could make a true impact come playoff time. Terrance Ferguson and Alex Abrines haven’t been as consistent as you would like, and with primary defender Andre Roberson having no timetable for a return, it might be time to consider a play for an experienced and valuable 3-and-D player.

Enter Washington Wizards’ Trevor Ariza, and the Thunder has a legitimate chance of stopping LeBron James or Kevin Durant in a seven-game series.

It’s getting tiring seeing the Blazers impress in the regular season, only to lose steam come playoff time. Damian Lillard and CJ McCollum have been carrying most of the workload for years, and this season could be the final window for the Blazers before their two superstars elicit a desire of wanting out.

Jusuf Nurkic is still a nightly double-double machine and there’s no disputing that. But the seven-foot big man isn’t the piece that will lift the Blazers to a legit shot at the Larry O’Brien trophy.

Prioritizing Lillard should be a matter of urgency for the Blazers front office right now. While McCollum is a bonafide second fiddle to his All-Star backcourt partner, packaging him with Nurkic for New Orleans Pelicans’ Anthony Davis could be an intriguing trade to make. A Lillard-AD partnership will be a handful for teams, and an exciting sight to see for Portland hoops fans.

Donovan Mitchell has hit the so-called ‘sophomore slump’ this season as opposing teams have clamped and scouted him already. It’s a bit unfair to place the burden of a disappointing season on the shoulders of a sophomore guard, but it’s also a testament on how good Donovan is as a player.

On the other side of the coin, it’s also a concrete evidence that the current Jazz roster is not yet built for championship contention. They shocked the basketball world when they beat the Thunder in the first-round of the postseason last year, thanks to some elements of surprise in their game. However, it’s hard to imagine how the Jazz can still surprise playoff teams now that opposing defenses have scouted Mitchell and head coach Quin Snyder’s offensive style.

There’s no doubt that the Jazz should build around Mitchell and Rudy Gobert from this point on but the supporting cast doesn’t necessarily make them an elite team. Combo forward Joe Ingles could be the ultimate glue guy, leaving Derrick Favors as an expendable. With Ricky Rubio and his $14M/year contract entering unrestricted free agency this year, the Jazz should opt to make future plans of getting big returns in the summer.

Head coach Tom Thibodeau and the Minnesota Timberwolves were the most talked-about team in the league during the early stages of the season. The Jimmy Butler drama finally ended when the team traded the disgruntled All-Star to the Philadelphia 76ers in exchange for two young, excellent players in Dario Saric and Robert Covington.

With the 33-year old Taj Gibson entering unrestricted free agency this year, it could be time for Thibodeau to replace the veteran with Saric at the starting lineup. A frontcourt trio of Covington, Saric, and Karl Anthony-Towns is the future core of this Wolves team, and it doesn’t hurt if the team already gets a look on how the future would look like. After all, the Wolves may find it difficult to get a playoff spot this year.

Furthermore, Thibodeau can also elect to stagger Andrew Wiggins with the second unit from this point on. Wiggins hasn’t been close to the superstar that scouts projected him to be before he was drafted. His $147M contract also makes it really difficult for Minnesota to find a willing trade partner for the 23-year old small forward. So subbing him out early from the starting lineup in the first quarter and inserting him at the start of the second period with the bench unit can be helpful in quickening his progress and developing him as a leader.