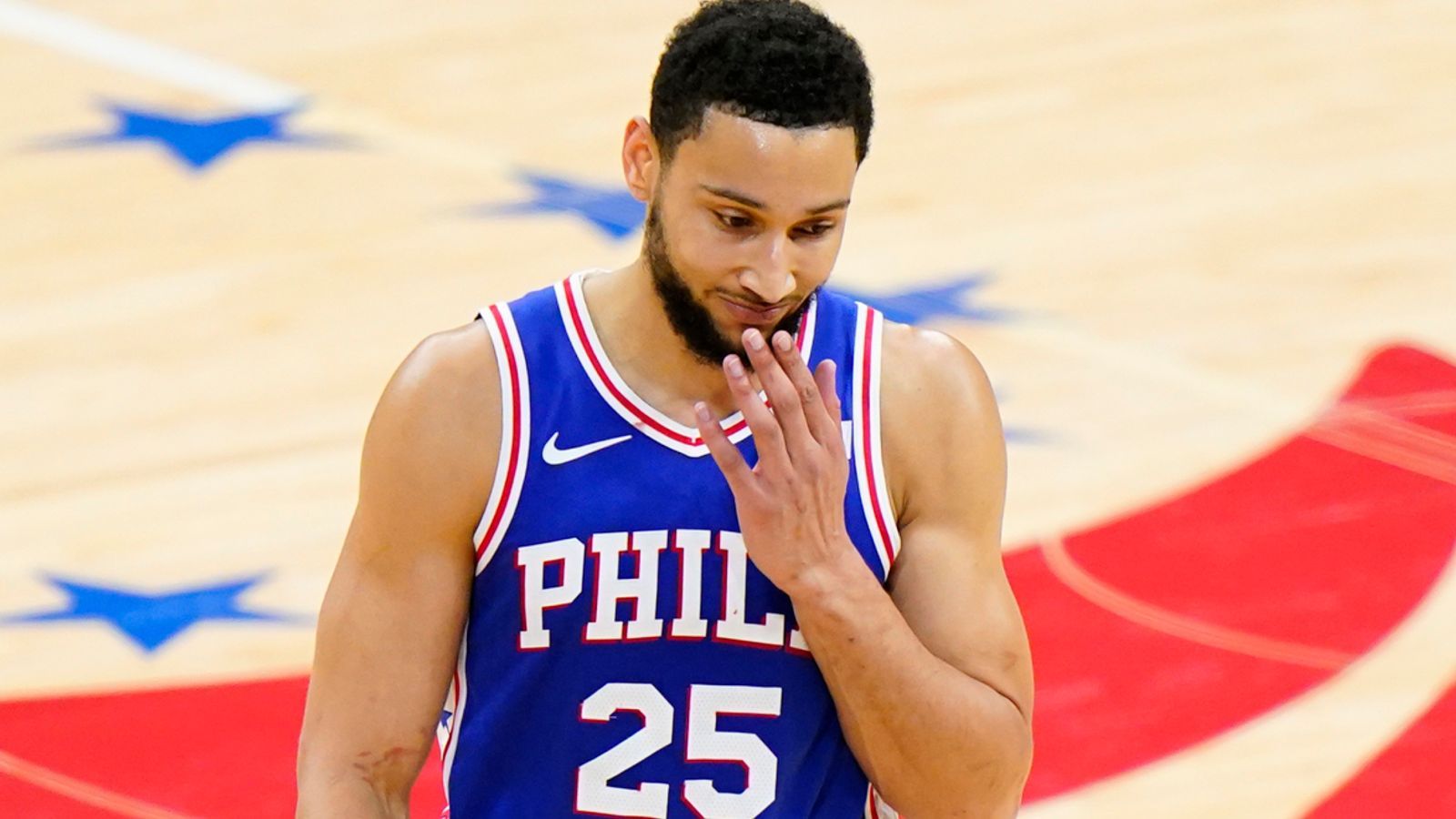 It will now be almost impossible that All-Star point forward Ben Simmons will return to the line-up of the Philadelphia 76ers in the upcoming 2021-22 NBA season. After suiting up for the Sixers in the first four years of his career, the 6-foot-10 Simmons has made it known that he will not return to the team and will not be with his teammates when the training camp officially starts next month.

This is a bitter end for the two parties, and it is indeed a shame that they cannot figure out what will work for them in terms of preserving their partnership. When Simmons was selected as the first overall pick in the 2016 NBA Draft, he redshirted the entirety of the 2016-17 season to recover from a major foot injury. Simmons would then debut the following season, and he immediately showed what he can do as he put up an outstanding all-around stat line of 15.8 points, 8.1 rebounds, 8.2 assists, 1.7 steals and 0.9 blocks per contest.

Simmons would continue filling up the stat line, and his all-around skill set helped him notch three All-Star appearances in his first four year in the league. Last season, the lefty point forward put up a stat line of 14.3 points, 7.2 rebounds, 6.9 assists, 1.6 steals, and 0.6 blocks per contest. He also led the league in steals per game with 2.1 during the 2019-20 season, establishing himself as one of the best defenders in the NBA.

However, Simmons’ inability to shoot has been a glaring weakness in his game, and this makes the Sixers’ offense a bit predictable for the opposing teams’ defensive schemes. His confidence spiralled downward in the 2021 NBA Playoffs when he was criticized by a lot of people for his reluctance to shoot from outside. As per Shams Charania of The Athletic, he mentioned that Sixers president of basketball operations Daryl Morey has already opened up trade talks with other teams in their pursuit of finding a suitable trade partner for the services of Simmons.

After a disappointing defeat in the second round of the playoffs to Atlanta, the 76ers and president of basketball operations Daryl Morey has been surveying the landscape for ways to improve their roster. Philadelphia lost to the Hawks in seven games in the Eastern Conference semifinals, culminating in coach Doc Rivers and MVP runner-up Joel Embiid singling out Ben Simmons’ play.

The mandate was for Simmons and Embiid to coexist on the court this past season under their new head coach and regime and to make a deep playoff run. Neither was accomplished. By all accounts, Embiid and Simmons have never been closer — off the court. But from Simmons’ inclusion in trade packages for James Harden with the Houston Rockets during the season to critical comments made about him from key 76ers people after Game 7, the writing is on the wall for Simmons and his future with the franchise. The 76ers have opened up trade conversations surrounding Simmons and have engaged with teams, sources told The Athletic. Those sources also say that teams that have engaged with the 76ers about Simmons have been met with a high price threshold for the three-time All-Star.

While it is true that both Simmons and Joel Embiid are two excellent All-Stars about to enter the peak years of their respective careers, it has become apparent right now that the Sixers front office are leaning towards building the roster around the latter. Embiid is coming off a season in which he put up 28.5 points per game, which also happens to be a career-high for the four-time All-Star big man. Along with his tremendous work in the scoring department, the superstar center also came through with his 10.6 rebounds, 2.8 assists, 1.0 steals, and 1.4 blocks per contest.

With Embiid’s high production and efficiency in almost every category, it is indeed a wise decision for the Sixers front office to build around him. However, he needs more spacing when he is on the floor, and the Sixers can give him that by acquiring more players who could consistently shoot from the outside. The Sixers had the likes of Seth Curry, Danny Green, Tobias Harris, and Furkan Korkmaz, who are all great three-point shooters. However, it is also true that Simmons’ inability to shoot from the outside meant that defenders could just sag off him, which messes up the Sixers’ flow on offense.

As per a joint column from notable beat writers of The Athletic, Sixers beat writer Derek Bodner mentioned that this divorce between the Sixers and Simmons was inevitable after the team bounced out of the second round of the 2021 NBA Playoffs. The Sixers front office may still want to have Simmons on their roster come training camp to increase his trade value, but that possibility still remains to be seen. If that happens, Simmons’ trade value could see an uptick and the Sixers could get a more upgraded trade package from other teams.

The Sixers and Simmons have seemingly been headed toward a divorce ever since his disappearance in the second round of the playoffs against the Hawks,  and after head coach Doc Rivers responded that "I don't know the answer to that question right now" when asked whether Simmons could be the point guard of a championship team. Simmons has been in trade rumors ever since, but team president Daryl Morey has reportedly been asking for a king's ransom in return, leading to a lack of traction of substantive talks. The question now becomes whether this report getting out could have any impact on lowering the Sixers' asking price and help grease the wheels toward a trade being completed before the start of camp.

With the news being out, it's unlikely teams will step up the quality of their existing offers between now and the start of training camp to meet the Sixers' demands. From the Sixers' perspective, they'd probably like to get into the season with Simmons on the roster and participating, and get closer to the trade deadline. That would help Simmons rehabilitate his trade value and get closer to a time in the NBA calendar when teams have more incentive to make significant moves.

Moving forward, the question now lies on which team will be serious in linking up with the Sixers on a possible trade involving Simmons. Even with his weakness in terms of his outside shooting, Simmons is a three-time All-Star for a reason. He is one of the best two-way players in the league right now. He can effectively defend all five positions as he combines his 6-foot-10 length with a high level of mobility and defensive instincts.

It is without a doubt that Simmons still packs a high value as a trade asset for the Sixers. The Sixers front office would certainly want to receive one or even two star-caliber players in return, players who will immediately contribute to the squad. Philadelphia cannot afford to take their foot off the gas pedal, especially considering that they have to do everything to make Embiid happy. We all know that to make a superstar happy, you have to surround him with a supporting cast that’s strong enough to contend for the coveted championship.

One of the teams that could make an offer to the Sixers could be the Sacramento Kings. The Kings have a couple of good players that they could dangle to the Sixers in combo guard Tyrese Haliburton and shooting guard Buddy Hield. Haliburton is coming off a rookie year in which he put up an all-around stat line of 13.0 points, 3.0 rebounds, 5.3 assists, and 1.3 steals per contest. Haliburton’s potential as a two-way player is certainly intriguing. Hield could also be someone that the Sixers could covet, especially if you look at his excellent shooting percentages in the past several seasons.

But as per Jon Krawczynski of The Athletic, one of the teams that could become more aggressive in acquiring Simmons could be the Minnesota Timberwolves. He mentioned that the Wolves don’t have a good power forward right now, and that is where Simmons could fit in. The only problem now lies on which players they will move to possibly get Simmons.

As of right now, the Timberwolves do not have a trade package that offers Morey the win-now assets a team in championship mode wants. They are not going to put Karl-Anthony Towns into any type of multi-team deal to try to get the wheels moving and Anthony Edwards remains untouchable as well. Even if the Wolves did include D’Angelo Russell in an offer — and they have talked all summer about  building a team with Towns, Edwards and Russell around Simmons — it would  not appear to be the magic bullet move that Morey needs to part ways with one of  the best defensive players in the league … yet.

In conversations with teams in Las Vegas, I came away with the impression that the Timberwolves were the team that was most active in talks to try to make a Simmons deal happen. Shams Charania reported earlier this week that Toronto has also inquired, but the market seems to be relatively quiet for Simmons at the moment. He’s a fantastic player on defense and in transition, one the Wolves believe would fit beautifully with some of their more offensive-minded core. But his struggles in the playoffs, and the widely held belief that the Sixers must move him before the season opens and things get really contentious, has cooled the activity around him.

The Sixers are also banking on the continuous development of a couple of their young talented players such as defensive-minded combo wing Matisse Thybulle and young scoring point guard Tyrese Maxey. Thybulle is coming off a spectacular stint with the Australian national team in the recently-concluded 2021 Olympic Games at Tokyo.