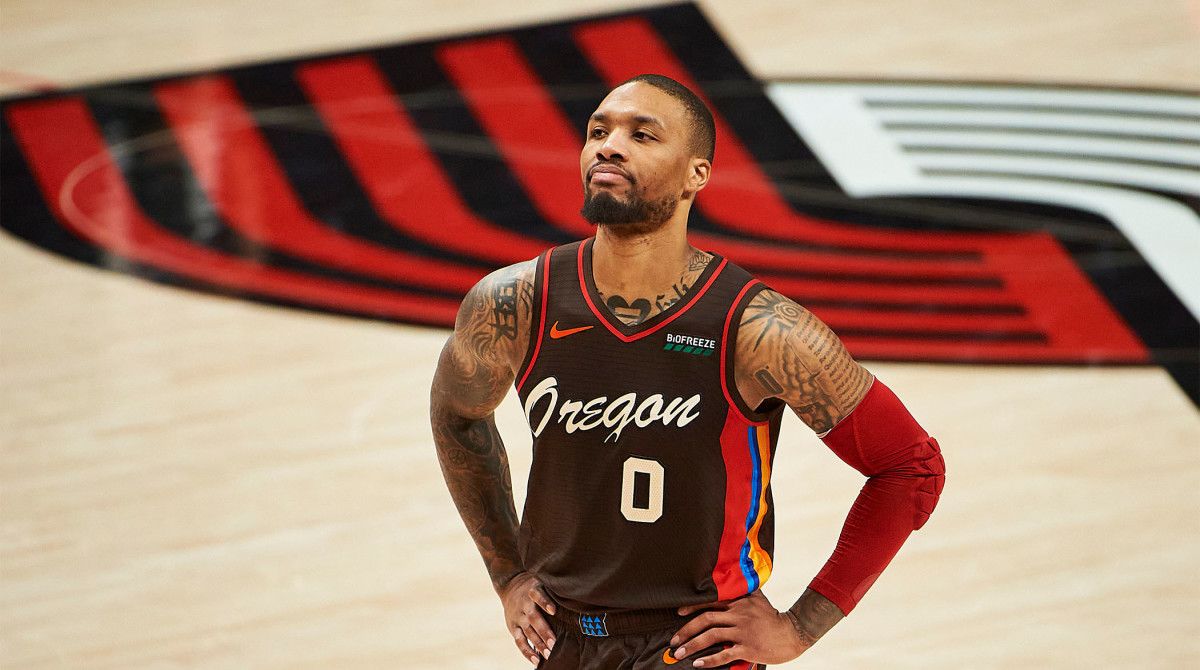 It has become apparent that Portland Trail Blazers superstar point guard Damian Lillard is not going anywhere. After multiple media outlets put out rumors and speculations that the long-time Blazers star will be requesting a trade away from Portland, Lillard himself shut down these talks during a recent media session.

Now in the thick of his pursuit of an Olympic Gold Medal when Team USA travels to Tokyo, Japan next week, Lillard took the time to address the trade rumors surrounding his name. As per an article written by senior writer Brian Windhorst of the ESPN, Lillard talked to the reporters and said that he still wants to win an NBA championship while donning the Blazers’ threads.

While it is true that he denied making any trade requests at this point, Lillard also made it known that he expects the Blazers front office to make immediate and drastic moves to improve the roster. Lillard said that the team has to be urgent in their approach this offseason, and that is completely understandable because he is not getting any younger. Lillard has just turned 31 years of age this month, and there is no doubt that his championship window in the NBA is slowly closing.

"Right now I'm not sure what I'm going to do. What I can say is my intentions and my heart has always been set on being in a Trail Blazers uniform for my entire career. But I think over time, you want to win it all. And I want to win it all in a Trail Blazers uniform. But we all have to be making strides toward that. The best way to put it is to be more urgent about what our next step is and how we move     forward. We're not a bad team; we're a winning team. We've got a great environment, we've got a great city, we've got great fans, there's a lot of positives.

I just think we've reached that point where it's like, OK, it's not enough. Do we actually want to win it all? Is that what we're shooting for? We've got to do things to show that. We've got to put action behind that. That desire to win at that level -- that's been my only thing this entire time. I haven't made any firm decision on what my future will be. A lot of things go into it."

Lillard, who has been with the Blazers since his rookie year during the 2012-13 NBA season, is coming off another tremendous performance this season. He put up all-around averages of 28.8 points, 4.2 rebounds, and 7.5 assists, including efficient shooting percentages of a 45% overall clip from the field, a 39% clip from the three-point line, and a 92% clip from the free throw line. Most importantly, Lillard is having these efficient numbers and percentages while being targeted as the number one priority of the defensive schemes of opposing teams.

During the playoffs this season, Lillard turned it up a notch. In the Blazers’ first-round match-up against the Denver Nuggets, Lillard went on to put up an excellent stat line of 34.4 points, 4.3 rebounds, 10.2 assists, and 1.0 steals per contest, while producing another efficient set of shooting percentages such as a 46% overall clip from the field, a tremendous 44% clip from beyond the arc, and a 94% clip from the charity stripe. But despite his herculean efforts in that series, the Blazers still lost to the Nuggets in six games, bowing out of the first round of the playoffs yet again.

So it is understandable why the Blazers front office are in some kind of a desperate situation. It is without a doubt that they still have a fairly good roster. CJ McCollum has proven time and time again that he can rise up to the occasion and be an excellent backcourt sidekick to Lillard. McCollum was actually tallying career-best numbers in the first half of the season before he suffered a major injury in the middle of the year. The 6-foot-3 shooting guard was still able to return to the court after a couple of months, but it was completely obvious that he never regained his deadly form during the first half of the season.

Other than McCollum, the Blazers also boast an excellent starting big man in Jusuf Nurkic, along with veteran scoring forward Carmelo Anthony and veteran defensive-minded combo forward Robert Covington. This is still a good team but it is obvious that they still need another superstar to pair with Lillard. As per Dan Devine of The Ringer, this Blazers squad is fully reliant on how far Lillard can take them. While that is not a bad thing, there is only so much that a single player can do to carry his squad.

“Dame Time” has been part of the NBA fan’s lexicon for years now, but it’s reached a brand-new stratosphere this season. He’s always been good in close-and-late situations: In the first eight years of his career, Lillard  ranked 16th, fifth, eighth, 15th, third, eighth, ninth, and sixth in total points scored in the final five minutes of games where the score was within five points, NBA Advanced Stats’ definition of “clutch” moments. This season, though? No. 1, by a lot; he’s scored 19 more points than second-place Zach LaVine in seven fewer “clutch”  minutes.

Lillard’s accuracy in those minutes has defied logic and physics: 19-for-28 (68 percent) from 2-point range, 16-for-30 (53 percent) from 3-point land, and a perfect 38-for-38 at the stripe, with a stellar 16-to-6 assist-to-turnover ratio to boot. And, as a result, the Blazers have been one of the best crunch-time teams in the NBA, going 16-6 in clutch games (second best in the league behind the 76ers) with a plus-24.1 clutch net rating (no. 3, behind Philly and the soaring Hornets). This is why Portland is 23-16, tied for fifth in the West and just two games behind an excellent Clippers team for fourth: When the outcome’s in the balance, Damian Lillard has   straight up taken it.

But of course, Lillard has a mission to do right now. After Team USA failed to win the gold medal in the most recent version of the FIBA World Cup Tournament, they are now pressed to turn the program around and win it all in the Olympic Games. San Antonio Spurs long-tenured head coach Gregg Popovich is still leading the charge for the national team, but it is a fact that the road ahead is as tough as it can be.

Team USA has just lost two exhibition games, one against Nigeria then followed with another tough loss to Patty Mills and the Australian squad. The winning percentage does not look good for the Americans since the last World Cup, and it is without a doubt that there is a cloud of uncertainty hovering above the team that proved to be invincible in the past decade.

But for Lillard, who is one of the leaders of this team, he believes that there is a rigorous process that he and his teammates will have to go through to win it all. Obviously, the talent gap between the United States and the rest of the world is not as huge as it was before. Other countries are closing in, and a bad shooting night from Team USA is all they need to manufacture another upset.

But of course, Team USA will not back down from the challenge. There is still a lot of work left do, and Lillard pointed out that he and his teammates have to be in shape and have to be as sharp as they can be to win the gold medal in Tokyo, Japan, as per Casey Holdahl of NBA.com’s Forward Center.

I think it’s been a process for all of us. None of us have ever really played together other than KD and Draymond. International game is so much different. Like, we trying to figure out how to play that game. And also how to be a team and not just a bunch of talented individuals. These other teams, they’ve been in camp longer than we have, they in better shape than we are right now. They’ve been playing as a team for years and years as a national team, so I think it just shows that the talent is getting better around the world and we’re just not going to roll out the ball and beat ‘em.

We’ve got to be in shape, we’ve got to be sharp and we’ve got to come together as a team to win these games. Each game we’ve played better, like (versus Argentina) I thought we looked like Team USA, but that’s because we’re playing ourselves into better shape, we getting more comfortable with each other, guys are kind a just falling into what they see themselves being on the team. And that’s it. Everybody is expecting us to just blow everybody out, I think it’s better that we experienced it now. Australia is a competitive team, Nigeria is a really good team this time around, they got NBA players out there.

Reports have it recently that both Bradley Beal and Kevin Love’s name were pulled out of the official roster. Beal was placed in COVID-19 safety and health protocol, while Love had to withdraw from the line-up due to a lingering right calf injury that he thought would heal as the Team USA camp progressed.

Replacing Beal and Love on the roster are Denver Nuggets veteran big man JaVale McGee and Spurs young forward Keldon Johnson. The Team USA will travel to Tokyo in the next few days as they prepare for their first assignment against Utah Jazz big man Rudy Gobert and the French Team on July 25.