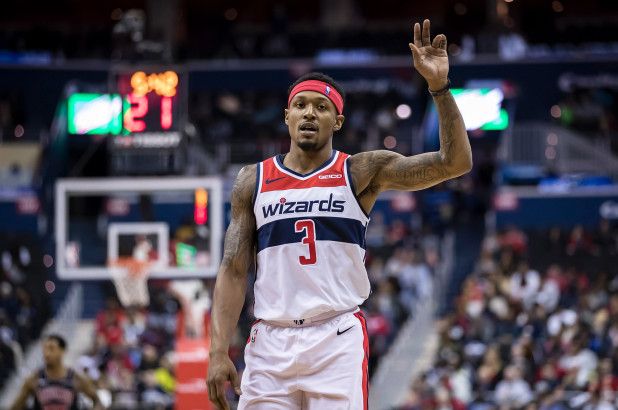 Wizards could be forced to move Beal soon

There has been a lot of traction on the possibility of the Washington Wizards trading away franchise player Bradley Beal to start a full rebuilding process. The Wizards front office has been staying firm on their statement that they are bent on keeping the All-Star combo guard, but a recent development could change all of that. Candace Buckner of The Washington Post reports that there’s a chance that Beal will decline a contract extension from the Wizards, leading to a potential parting of the two camps.

“On July 26, exactly three years after Beal signed his max deal, the Wizards can officially present a three-year, $111 million extension. The team has indicated it plans to give Beal the offer, and both the player’s camp and the franchise have remained in contact throughout the summer. Around the league, however, the extension is not viewed as a done deal, and there is a growing belief that Beal will not remain in Washington for his entire career.

“He’s out of there,” one well-placed person within the NBA predicted.”

On his way to his second consecutive All-Star appearance, Beal carried the John Wall-less Wizards with career-high numbers of 25.6 points, 5.5 assists, 5.0 rebounds and 1.5 steals per game. With the team on the decline in the past couple of years, Beal became a sought-after trade candidate before the February trade deadline last season. Other teams thought that Washington could be planning on a full rebuild and might consider trading away their 26-year old star. But the Wizards reiterated time and time again that they aren’t going to give up Beal, and will be looking at him as their main man in the future.

But with how player movement has gained a lot of momentum and leverage nowadays, we won’t be surprised if the Wizards try to enter Beal in the trade market. Beal would be an unrestricted free agent in 2021, which means that he will carry an expiring contract through the 2020-21 NBA season. Shipping Beal right now could put the Wizards in the upper hand position rather than dangling his expiring contract to interested teams in 2020. Trading for superstars in expiring contracts puts other teams in precarious situations as they are not sure if that star will opt to re-sign with them. Because of that possibility, teams offer less desirable assets in exchange for that superstar so as to lessen the negative impact if that player bolts out the door in free agency.

The Wizards front office has been in a turmoil until now, and that might tip the scales towards a Beal departure. Last month, Beal talked with The Washington Post to point out his concern on how the organization are going to reconstruct their personnel after the firing of general manager Ernie Grunfeld.

“I’d be naive to say I wouldn’t be [interested in extension talks]. Washington is where  I’ve been the last seven years, going on eight. It would be great to play in one place  forever. But at the same time, you want to win and make sure you’re in a position to do so. I’m definitely going to evaluate who we hire as the GM and who we pick up on the team. All that plays a factor.”

Wall is expected to miss the entirety of next season as his recovery from a ruptured Achilles injury will take a full year to be completed. Their starting point guard in Tomas Satoransky recently signed with the Chicago Bulls, leaving Beal with no prominent partner in the backcourt. The Wizards selected Japanese star Rui Hachimura in the recently-concluded draft, but it might take a couple of years more for the young combo forward to meet his full potential. They re-signed young budding center Thomas Bryant and filled in the holes on their point guard position with Ish Smith and Isaiah Thomas. Other than that, Washington hasn’t made any big moves this summer so it would be expected that they are going to be a lottery team again next season.

Cavaliers fail to engage with trade partners for JR Smith

With the market showing no interest for a potential trade for veteran gunner J.R. Smith, the Cleveland Cavaliers have opted to waive the 33-year old shooting guard, paving the way for him to enter the free agency market. ESPN’s Brian Windhorst has the inside scoop on why the Cavaliers have to release Smith.

“The Cavs have been looking to trade Smith since November because only a portion of his $15.6 million salary for next season is guaranteed. The team worked out a deal  with Smith to extend his guarantee date from June 30 to July 15, boosting his   guarantee from $3.9 million to $4.4 million, but was unable to find a trade.

By waiving Smith and stretching the guaranteed money, the Cavs will move below the luxury tax for the 2019-20 season.”

Smith played in only 11 games for the Cavaliers last season, averaging 6.7 point, 1.9 assists and 1.6 rebounds, including a lowly 31% clip from beyond the arc. But those low numbers don’t necessarily indicate what Smith could contribute to playoff-contending teams. the former Sixth Man of the Year is a career 37% shooter from three-point territory, and is one of the underrated defenders at his position. To top it off, Smith normed a stellar 43% clip from deep during the 2016 playoffs when the Cavaliers captured their first NBA championship.

With an aim towards moving below the luxury tax space entering the 2019-20 season, the Cavaliers have been aggressive this summer in gauging the trade market’s interest on Smith. However, the team didn’t find any taker, per Chris Fedor of Cleveland.com.

“The Cavs are surprised they haven’t found a taker yet, believing they made better   salary-dump offers than others accepted this off-season. They've also been stunned   by the bad, burdensome contracts teams have been trying to force on them.

According to sources, the Cavs offered lighter protections to the Golden State   Warriors in a potential Andre Iguodala swap. Instead, Golden State made its trade with Memphis, giving up Iguodala, cash and a protected future first-round pick.”

If they have succeeded in enticing the Warriors with Smith, receiving Iguodala in the trade shouldn’t mean a lot as it’s expected that they will waive the veteran defensive ace soon after. Of course, Iggy would want to compete for another championship at this point of his career and staying with the Cavaliers would not give him that platform.

It remains to be known what teams are interested in signing Smith next season, although ESPN’s Adrian Wojnarowski has already reported that the Los Angeles Lakers will not be a part of that list.

Still one of the most effective players at his position, sweet-shooting combo big man Kevin Love will be an outstanding starter for any contending team in the league. There are a lot of speculations that he doesn’t fit in with the Cavaliers’ rebuilding plans, prompting rumors that he will soon be traded. However, Chris Fedor of the Cleveland.com says that Cleveland isn’t that aggressive in pursuing a Love trade and points out that they would want a massive assets haul for them to consider shipping their 30-year old star.

“If the Cavs are blown away by a Love offer and receive the package that meets their demands then, of course, they would consider it. It would be foolish not to. According to sources, the Cavs would want some combination of young players and draft picks. Not one or the other. Both.

There’s something else to consider: Love is coming off a bad year, which has raised questions about his value. Not in Cleveland. Elsewhere around the league.”

An injury-marred season forced Love to appear in just 22 games for the Cavs, although he was still able to put up a double-double stat line of 17.0 points, 10.9 boards and 2.2 assists per contest. Love signed a four-year, $120 million contract with the Cavaliers last year, and will carry a cap hit of $28.9 million next season.