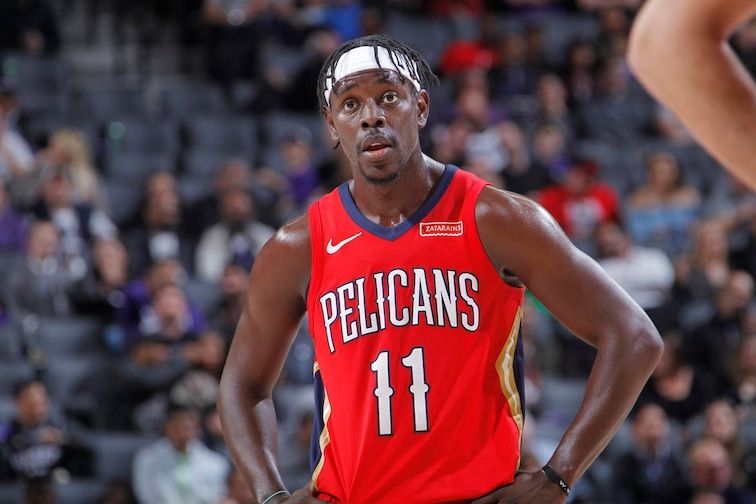 It’s becoming apparent that the Brooklyn Nets are going all-in for another star-caliber player next season. Reports have it that the Nets are already discussing a trade package for New Orleans Pelicans star Jrue Holiday, a combo guard who has the much-needed versatility to co-exist with Kyrie Irving and Kevin Durant.

Heavy.com’s Brandon “Scoop B” Robinson revealed that the Nets have already come up with an offer for Holiday’s services, a combination of two young budding stars and future draft picks.

“Players & picks have been discussed. Have heard that Nets offer is [Spencer] Dinwiddie/[Jarrett] Allen/[Dzanan] Musa and a protected future 1st. … nothing can be done before the Bubble ends and a trade window opens.”

This Robinson report comes after Durant praised Holiday’s versatility during an appearance on The Old Man and the Three podcast hosted by Pelicans veteran guard JJ Redick. Durant emphasized how willing Holiday is to be the primary defender on an opposing team’s best player, and even reiterated that the combo guard can thrive in any given system.

“You put Jrue in any system, any coach is going to ask him to guard the best player. We played them in 2018, second round and he guarded me the whole series. He was picking me up full court, he was guarding me in the post. Actually, it was tough to dribble on Jrue Holiday. He slides his feet so well, he’s got good hands, he’s strong, he’s got good instincts. I gained a lot of respect for him in that series because he went from guarding me to Klay (Thompson) to Steph (Curry) to guarding Draymond (Green), neutralizing picks and rolls. He’s special. He’s special on that side of the ball.”

It won’t be an easy negotiation to pull off, but the Nets should get really creative and do everything to acquire Holiday. The 6-foot-3 guard has been one of the most underrated NBA stars for so long, and his effectiveness on both offense and defense shouldn’t be taken for granted.

Holiday poured on 19.1 points, 4.8 rebounds, 6.7 assists and 1.6 steals per contest for the Pelicans this season while playing a primary role on both ends of the floor. That’s not an easy task even for a star, but that is also the main reason why Holiday is highly-valued in today’s positionless game.

But the main question in this potential deal is how willing the Pelicans front office are in letting go of their veteran star. Even with Brandon Ingram growing into an All-Star and Zion Williamson proving that he is not just all-hype, Holiday was the steadying presence for this very young Pelicans squad.

Can Lonzo Ball shake off his usual inconsistency and be an efficient offensive facilitator each and every night? Can you give the rock to Zion and expect him to also make plays for his teammates on a consistent basis? Can Ingram further improve his playmaking especially in a game’s most crucial moments?

But that’s where Spencer Dinwiddie comes in. Dinwiddie is coming off a career-best season that saw him tally 20.6 points and 6.8 assists per game. Bleacher Report’s Preston Ellis emphasized that Dinwiddie, along with Jarrett Allen, should be more than enough for the Pelicans to consider letting go of Jrue.

“Even if Holiday wants to finish his career in New Orleans, vice president of basketball operations David Griffin needs consider his age (30) relative to the core of  Lonzo Ball (22), Brandon Ingram (23), Josh Hart (25) and Zion Williamson (20).

Furthermore, Allen provides New Orleans with the rim protection that they sorely lacked this year. Favors is the better post scorer but he doesn’t have the athleticism and instincts that Allen has on the defensive end. It remains to be seen if the Pelicans will continue putting Zion on the center position, but they need someone like Allen to defend bigger frontcourt stars like Philadelphia 76ers’ Joel Embiid, Los Angeles Lakers’ Anthony Davis or Denver Nuggets’ Nikola Jokic.

As for Holiday, it’s turning out that he would be a highly-coveted player in trade talks. ESPN’s Tim Bontemps floated his name as a possible trade target for the championship-hungry Golden State Warriors.

“(Devin) Booker isn’t available. Neither is Washington Wizards guard Bradley Beal. Despite a first-round playoff exit, Philadelphia 76ers general manager Elton Brand has declared Ben Simmons and Joel Embiid off limits as well. The best package Golden State has to attract a star — forward Andrew Wiggins, the No. 2 pick and Minnesota’s lightly protected 2021 first-round pick — would almost assuredly be available if any of those players do hit the trade market.

The most gettable name might wind up being New Orleans Pelicans guard Jrue  Holiday, but he turned 30 in June and can hit free agency in 2021. Celtics guard Marcus Smart was mentioned as another good fit, yet it’s hard to see Boston being  willing to move him.”

Holiday should be a perfect partner for both Steph Curry and Klay Thompson as his ability to play off the ball will be excellent for the Warriors’ free-flowing offense. Furthermore, his stellar defensive skills will cover Curry’s weakness on that end.

After a disappointing semifinal round playoff exit at the hands of the Nuggets, it should be expected that the Los Angeles Clippers will do everything they can to bolster their roster. Stars Kawhi Leonard and Paul George can choose to enter unrestricted free agency in the 2021 offseason, an event that will negate the Clips’ tremendous efforts to change the dynamic of the franchise.

Having said that, it is being speculated that the Clippers might pursue acquiring Derrick Rose from the Detroit Pistons. Chris Haynes of Yahoo Sports reported about this development, which could be a huge plus for the Clips. According to the NBA Analysis Network, Rose’s elite ability to drive down the lane and make plays for his teammates will benefit the Clippers’ stars.

Having a player like Rose that is so dynamic at driving the rim would help  substantially with applying needed pressure on the defense. It would also help Paul George, in particular, since he’d be able to play more off the ball and get easier shots.”

Rose still has one more year left on his contract with the Pistons. With Detroit trading away their top players, they might move Rose and even Blake Griffin in the offseason to pave way for a full rebuilding stage. Rose, who is posting stellar numbers of 18.1 points, 2.4 boards and 5.6 dimes per contest, has embraced his role as a sixth man for Detroit.

He could still serve that role for the Clippers, depending on which pieces will the team move in exchange for his services. The Pistons may ask for young shooting guard Landry Shamet to complement their rebuild, along with a couple more role players to match salaries.