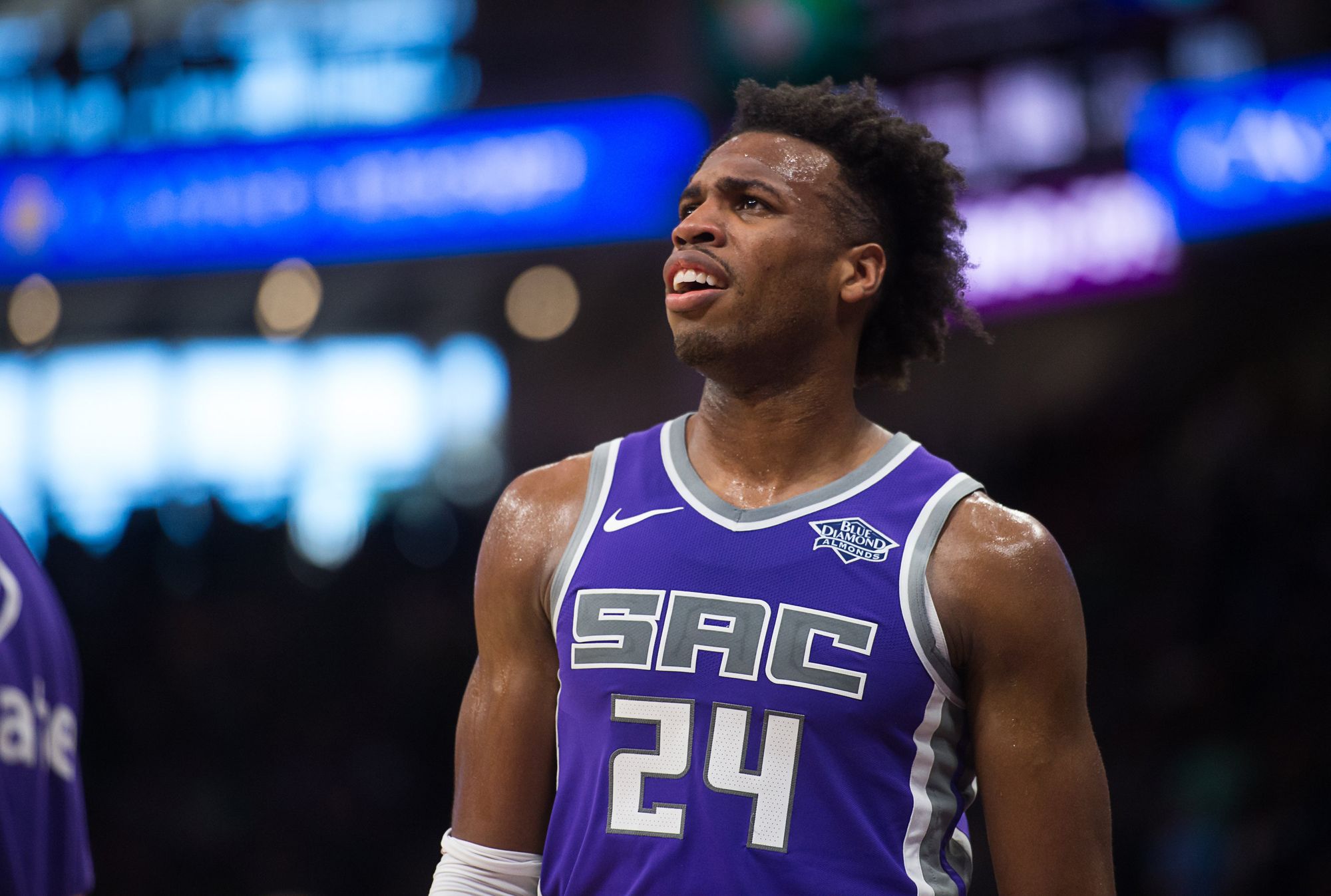 The Sacramento Kings might shakeup their roster with a new front office in place after the resignation of former general manager Vlade Divac and assistant general manager Peja Stojakovic. The Kings have decision to make with their free agents in the offseason, but they are also being mentioned in recent trade rumors with Buddy Hield as the main subject of the trade chatters.

Hield's name has floated in rumors again after he liked a tweetthat linked him to a possible trade to the Philadelphia 76ers. The action of Hield generated speculations that he wants out of Sacramento, and Philadelphia is his preferred destination. Like the Kings, the 76ers are expected to make significant moves this offseason after a disappointing end to their playoff campaign and the fact that they have a new head coach in Doc Rivers.

According to Jason Jones of The Athletic, Hield initially praised Kings head coach Luke Walton, but the relationship went on a downward trajectory late this season. Earlier this year, it was reported that Hield did not like how Walton handled his benching, which created talks about the guard requesting a trade after the 2019-20 NBA season. Hield and his camp is reportedly not returning the calls from Walton in recent weeks.

His decision to like the talks linking him to the 76ers might not be too significant, but Jones feels that it might have a deeper meaning. The 27-year-old guard, who averaged 19.2 points on top of 4.6 rebounds and 3.0 assists this season, reportedly felt that he was used as a scapegoat by their coaching staff this season.

"Hield’s personality is such that it’s not beyond him to be trolling fans and media who monitor his posts. This, however, is a different level of public frustration for Hield, who never brazenly called out Joerger as he did Walton this season," Jones said. "How the benching situation was handled left Hield feeling he could not trust Walton. Hield felt like he was used as the scapegoat for the team’s struggles in the first half of last season."

Hield's role in Sacramento was unchanged even after the long break due to the coronavirus pandemic. He looked lost inside the NBA bubble, as he averaged just 14.3 points in their last eight games of the season. It is worth noting that he tested positive for Covid-19 before the restart, but he said it had nothing to do with his performance. During a media session, Hield hinted that he was really unhappy of his role in Sacramento.

Jones said that the Hield situation remains fluid at this point. Sacramento is being linked to former New Orleans Pelicans head coach Alvin Gentry. Gentry could be the replacement to former Kings associate head coach Igor Kokoskov, and his arrival might turn the tables around for Hield because he was his first head coach in the league when he was drafted by the Pelicans. However, Gentry is also reportedly on the radar of the 76ers.

"If the Kings are inclined to keep Hield, it could help if Sacramento is able to land Alvin Gentry as its associate head coach," Jones said. "A league source said the Kings would like to make that happen, but they have competition from Philadelphia, which would like to add Gentry to Doc Rivers’ staff. Gentry was Hield’s first NBA coach in New Orleans before he was traded to Sacramento in 2017. Gentry has spoken highly of Hield."

It remains to be seen whether the two parties will find a common ground in the offseason. Jones thinks that moving Hield for the right pieces would make a lot of sense for a team like Kings, who are expected to cut cost because of the pandemic. Shedding the salary of Hield would also give the Kings more room in handling the restricted free agency of Bogdan Bogdanovic and the possible contract extension of DeAaron Fox.

The Brooklyn Nets will be one of the most intriguing teams next season, as they are expected to have a healthy superstar duo of Kevin Durant and Kyrie Irving. If Durant and Irving remains healthy, the Nets are tipped to become one of the favorites to win the Eastern Conference. Knowing that their championship window is now, the Nets will likely make moves to find a third star in the offseason.

The Nets were previously linked to Washington Wizards guard Bradley Beal, who is consistently being mentioned in trade rumors. However, Beal appears to be out of the trade picture at this point, as he has already expressed desire to remain in Washington and continue to play with fellow star guard John Wall. According to Alex Schiffer and William Guillory of The Athletic, the Nets are looking at the possibility of trading for Jrue Holiday.

"Jrue Holiday became the second guard to have his name mentioned in a possible trade to Brooklyn after a recent report indicated that the Nets have discussed potential packages with the New Orleans Pelicans," the report indicated. "Former Brooklyn assistant general manager Trajan Langdon is now David Griffin’s right- hand man in New Orleans with the same title, which makes for good relations between the two front offices."

Holiday will be one of the most-sought veterans in the trade market in the offseason. Schiffer believes that the veteran point guard would be a good fit alongside Durant and Irving simply because he does not need the ball in his hands to be effective. The 30-year-old point guard would also be the best defender of the Nets and has the ability to shoot off the ball, which is what the Nets need because they have two ball-dominant superstars.

However, Guillory thinks that the Pelicans would ask for a lot if they decide to trade Holiday. If Brooklyn decides to pursue Holiday, Schiffer thinks that the Nets might be forced to give up Caris LeVert, who is coming off a strong season with the Nets. LeVert was the main man for the Nets during their bubble run, and has received praises from Durant, but it is believed that teams would ask for him in any trade for a third star for the Nets.

"Durant recently endorsed LeVert as the team’s third star, which led me to believe that he wants him to stay," Schiffer said. "I’ve long argued that the Nets are better off going into next season with the roster as is and seeing who fits and who doesn’t fit alongside the two stars before going down the trade route. So I think as of right now the Nets will shop for a star and avoid trading LeVert if possible, but I think it’s inevitable that his name will come up."

LeVert turned heads when he averaged 25.0 points on top of 6.7 assists and 4.5 rebounds per game for the Nets in seven seeding games. He managed to sustain his momentum in the playoffs, where he posted 20.3 points to go along with 9.5 assists and 5.8 rebounds per game. Guillory feels that the Nets would really go after another third star but not at LeVert's expense.

"The Nets are going to be involved in talks around all of the big-time trade chips this offseason," Guillory concluded. "I’m just not sure they’ll be willing to go through with something unless they can get it done without including LeVert. Or they pull an old- school Brooklyn Nets move and throw a million draft picks on the table."

Chicago Bulls guard Zach LaVine were mentioned as a potential trade target for several teams, including the New York Knicks and the Brooklyn Nets. It is no secret that LaVine had a disappointing season despite averaging a career-high in points this season. However, based on how the Bulls made their moves in the past several weeks, an analyst thinks that the LaVine will stay in Chicago.

In his regular mailbag session, Bulls analyst Sam Smith was asked if the Bulls should agree to trade LaVine as part of a package for the first pick from the Minnesota Timberwolves. Smith pointed out that he feels the new front office of the Bulls view LaVine as the cornerstone of the franchise. He also added that Minnesota is unlikely to accept the deal because they can draft Edwards, who could play the same role as LaVine.

"I believe the new management is committed to Zach and I have made no secret of my belief in his abilities," Smith said. "Though it sounds good for Minnesota, I'd guess they view Edwards as similar to Zach, if not as mature. And Zach has just two years left on his deal at perhaps three times the price Edwards would cost them. There's no urgency there to make a huge jump and they'd be guaranteed five years with Edwards."

For his part, LaVine has also expressed excitement over the new era in Chicago. After the Bulls named Arturas Karnisovas as the new vice president of basketball operations and Marc Eversley as the new general manager, they also hired Billy Donovan as their new head coach. LaVine gave his stamp of approval to the hiring, saying that Donovan would be beneficial to him and the young core of the Bulls.