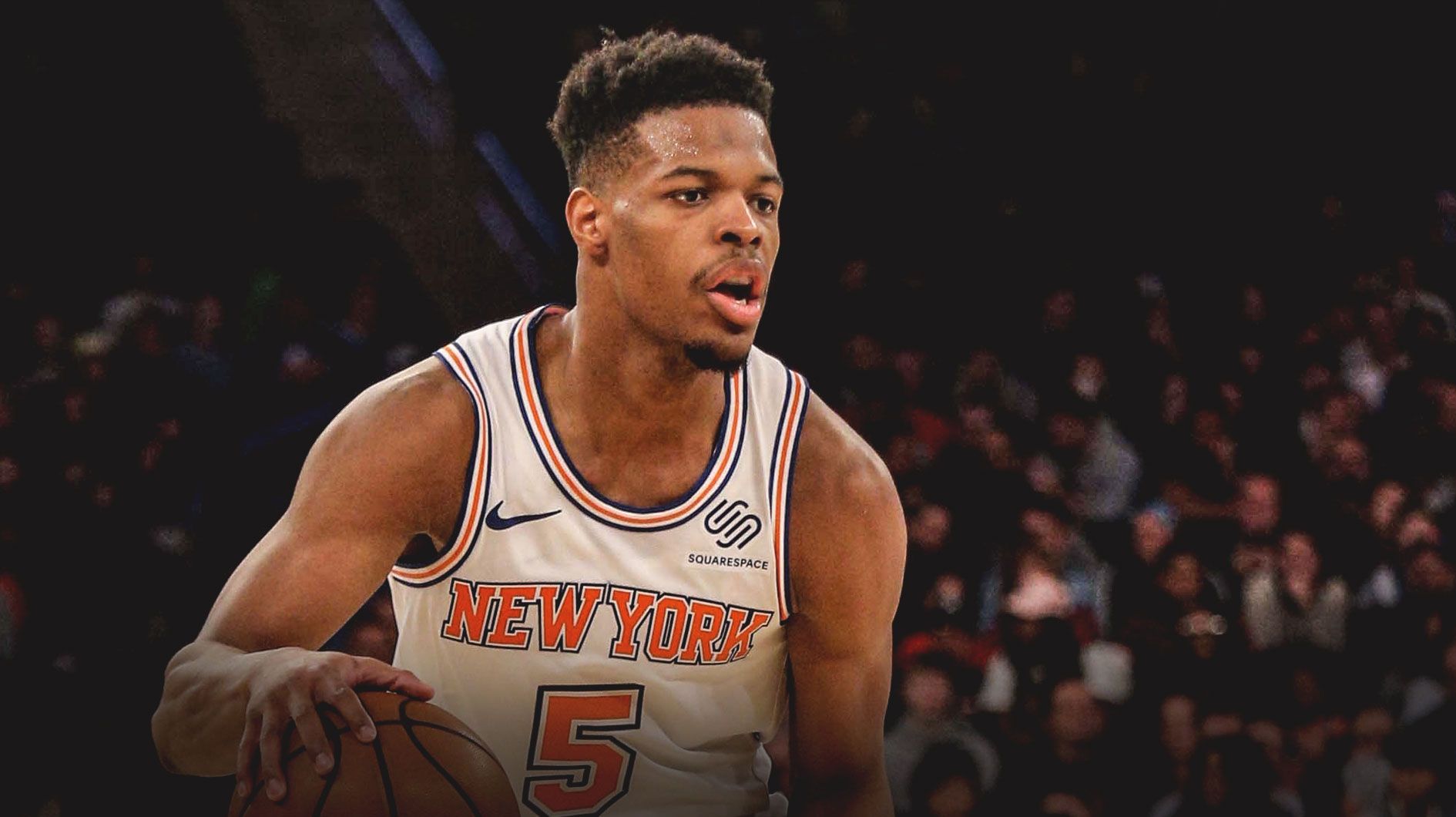 What are the Knicks’ plans with their young talented guard?

Dennis Smith Jr has always shown glimpses of his brimming talent, but the inconsistencies that come with his situations have greatly hindered his progress. Now in his third year in the league, Smith’s production has drastically regressed. From norming double-digit scoring averages in his first two seasons, Smith is only putting up 5.5 points, 2.3 rebounds and 2.9 assists per game for the New York Knicks this year. That decline in his numbers is definitely caused by a high decrease in his playing time as the Knicks have been giving him only 15.8 minutes in the rotation.

If the Knicks coaching staff doesn’t appear to provide him the playing time for him to grow, shouldn’t the front office try to move him already? Smith has always had the makings of a star player, but it seems like his progress is hindered every season. After a very productive rookie year with the Dallas Mavericks, he was sent to the Knicks as an important piece in the Kristaps Porzingis trade deal last season. However, injuries and off-court problems have forced Smith to sit out tons of games in the team’s current campaign.

As per SNY’s Ian Begley, many people believed that there was a strong possibility that Smith will be moved before the trade deadline last February. But Begley also noted that the team’s front office shuffle also could have prevented a trade from happening. Still, Smith has also hinted that “opportunity and fit” are two important factors in a young player’s individual success, prompting speculations that it’s still better for both Smith and the Knicks to part ways in the offseason.

“In mid-January, when talking about his friend Bam Adebayo's success in Miami, Smith Jr. said that big factors in a young player's performance in the NBA are opportunity and fit. That's a credo that other players, coaches and execs echo. Maybe the Knicks and Smith Jr.- - the best player the team received in the Kristaps Porzingis trade -- aren't the best fit at the moment?

Maybe another organization -- such as Orlando, which had some interest in Smith Jr. prior to the deadline -- would be a better fit for the young guard? No matter where he ends up next season, Smith Jr. would do well to strengthen his outside shooting. His athleticism is unquestioned; when healthy, he can get by defenders with ease and find teammates around the rim. But scouts and coaches say he needs to be a threat to knock down an outside shot in order to put maximum pressure on opponents.”

True enough, Smith has the potential to be a two-way player in the NBA. His elite athleticism goes both ways – vertical and speed. Not all point guards have that rare combination of athletic gifts, and he also has the ability to finish creatively around the rim. His ball-handling skills are still not an elite level, but he has a very quick first step to blow past his defenders.

Smith has also occasionally shown the vision to make accurate passes on the fly. He is very much underrated on that face of his game, and it is one his excellent selling points if he continues to use it. Smith also exerts decent effort on the defensive end, as evident by his average of 1.1 steals in his young career. The only downside in his skill set is his inconsistency as a long-range gunner. He has not averaged more than 32% from the three-point line. In fact, his shooting clip from deep has even declined to a lowly 29% this season.

To make matters worse, Smith is a terrible free throw shooter. It’s an unforgivable weakness to have if you are a point guard. It hinders him from fishing contact fouls from the defense. Still, it’s not as if Smith’s shooting form is broken or unorthodox. He makes some of his mid-range shots, may it be after slipping an on-ball screen or through a step-back move.

In a column written by Marc Berman of the New York Post, scouts still believe that Smith has what it takes to excel if he puts his mind into it. A personnel man from a Western Conference team told Berman that Smith’s basketball IQ still needs to develop because most of the time, it appears that he “doesn’t have a clue how to make others better.” That same person also observed that Smith only puts in the defensive effort when he is in the mood to exert the effort.

Berman also included a quote from an anonymous scout, who reiterated that the young talented hooper could be better if he seriously develops a pass-first mentality as a point guard.

“He thinks too much about his shot and trying to score the ball. He needs to be more of lead pass-first guard and score second. Dennis also need a coach who shows him love and gives him confidence. The quickness and ability to dribble drive is always there but he wants to always be the highlight play with traffic dunks.”

If and when Smith finally learns to play within his role as a playmaker, he should be a force to reckon with in the backcourt. There are lots of teams who still need shot-making point guards in their roster. The Phoenix Suns have been looking for depth behind their starting backcourt of Ricky Rubio and Devin Booker. Smith could be the scoring punch off the bench that the Suns direly lack this season, and a player development coach like Monty Williams should be instrumental in injecting confidence in Smith’s game.

Aside from the Suns, the Miami Heat could also use a shot creator like Smith if veteran sixth man guard Goran Dragic decides to leave in free agency. The New Orleans Pelicans could also come looking for Smith’s number if back-up point guard Frank Jackson, who is set to enter restricted free agency in the upcoming offseason, proves to be too expensive for their pockets.

The Knicks are very much hungry for a star presence, and they are now willing to give up future assets to get one. In a separate column written by Begley for SNY, he emphasized that the management could now be willing to let go of a future first-round draft pick to acquire an All-Star caliber player via a trade deal.

Begley cited past examples of how hesitant the Knicks management was in including a first-rounder on trade negotiations for stars like Jimmy Butler, Kyrie Irving and Anthony Davis. Yet, the team has recently softened their stance on this matter.

“The Knicks, you'll remember, had no interest in trading future assets for Butler. They engaged with Cleveland on Irving and with New Orleans on Davis, but New York wasn't comfortable giving up enough assets to land either player. Under former team presidents Phil Jackson and Mills, the Knicks had been strongly opposed to dealing future first-round picks. This was a reasonable stance to take for an organization that had been burned so often by trading first-rounders in the past.

But before the 2020 deadline, that approach changed. The Knicks were comfortable including future first-round picks in deals for Russell and Charlotte's Terry Rozier. The feeling among some in the organization is that they have so many picks (again, seven in the next four drafts) that they can afford to send one or two out in a trade if it nets a star.”

Before the February trade deadline, the Knicks heavily tried to swing a trade for D’Angelo Russell, who was with the Golden State Warriors back then. Begley reported that the Knicks had a package of power forward Bobby Portis, swingman Allonzo Trier and young defensive point guard Frank Ntilikina offered to the Warriors. But the Dubs went for the Minnesota Timberwolves’ offer of Andrew Wiggins instead.

New York also included a future first-rounder, along with Julius Randle, in a bid to nab Terry Rozier and Malik Monk from the Charlotte Hornets. Those negotiations also went for naught, and it may have been a blessing in disguise for the Knicks. If they are going to finally let go of a first-round draft pick, they should be able to acquire a proven star in exchange for it. Neither Rozier nor Monk are star-level players in the league.