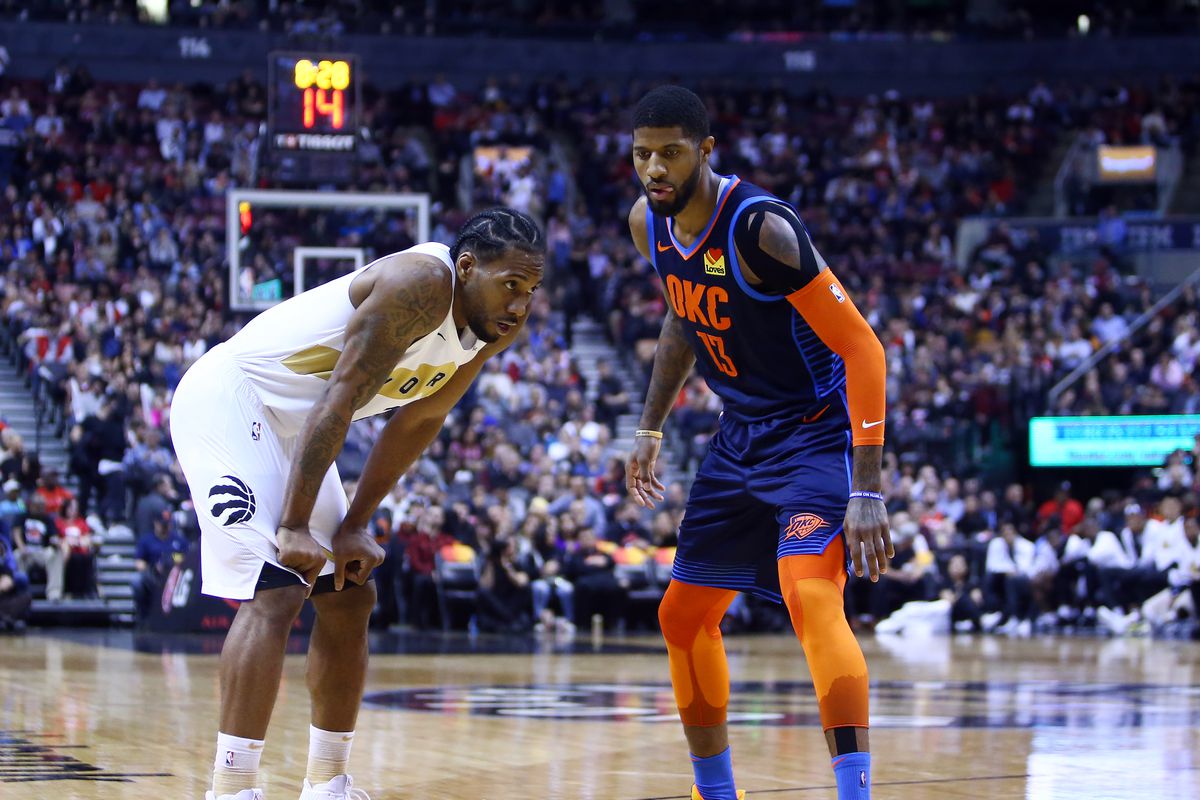 Clippers pull off heist with acquisitions of George and Leonard

The Los Angeles Clippers have completed quite a heist. With Kawhi Leonard issuing a condition that the Clippers front office should bring in Oklahoma City Thunder star forward Paul George first before he commits to them, Jerry West and the rest of the organization successfully negotiated a deal with the Thunder to secure the services of the 29-year old George. ESPN’s Adrian Wojnarowski has the full details on this landscape-changing trade.

The Clippers also are sending point guard Shai Gilgeous-Alexander and Danilo Gallinari to the Thunder in the deal, league sources said.”

With Kawhi also actively recruiting George to come and join him at Los Angeles, George immediately requested a trade from the Thunder front office, per Wojnarowski.

“George and Leonard wanted to play together, and George and his agent, Aaron  Mintz, approached Thunder general manager Sam Presti in recent days and requested a trade, league sources said. Leonard wanted to walk into a championship  contender, and he believed George was the co-star he wanted by his side.”

George, who averaged career-high numbers of 28.0 points, 8.2 rebounds, 4.1 assists and 2.2 steals per game last season, will partner with the recently-minted Finals MVP Leonard to further continue the winning culture that the Clippers have built last year. The Clips, who also re-signed defensive guard Patrick Beverley and young budding center Ivica Zubac this offseason, will be boasting star power and excellent depth on their roster. Reigning Sixth Man of the Year Lou Williams is still with the team, while Montrezl Harrell and Landry Shamet will be expected to effectively fill in their respective roles for the team.

Wojnarowski would also report that the Thunder also engaged the Raptors in a potential George trade, but it is believed that the Raps don’t have enough assets to satisfy the other party. The Thunder apparently wanted Pascal Siakam, the 2019 Most Improved Player, as the centrepiece of the deal. However, sources believed that even with Siakam in the agreement, the Raptors don’t have much to offer so the Thunder opted to take in the Clippers deal instead.

For the Thunder, this deal is all about rebranding for their future. Aside from the massive haul of first-round draft picks that they got from the Clippers, they also acquired Gilgeous-Alexander, a 6-foot-6 modern prototype point guard who can do almost everything on both ends of the floor. SGA normed decent numbers of 10.8 points, 3.3 assists, 2.8 rebounds and 1.2 steals per game, and also showed a natural knack of making the right decisions in crucial plays, something that rookies are not accustomed to doing. With Gilgeous-Alexander on board, the spotlight at Oklahoma City will now shine on long-tenured star Russell Westbrook’s future with the team.

For the Clippers, this will be a culmination of the patience that have shown in rebuilding the roster post-Lob City era. Their right approach towards winning caught the eye of Leonard, who Wojnarowski points out doesn’t want to build another Big 3 with LeBron James and Anthony Davis at the Lakers camp.

“In the end, Kawhi Leonard didn't want to construct a Super Team with the Lakers. He wanted a co-star across the Staples corridor with the Clippers, and made it clear  to Steve Ballmer and Lawrence Frank: Get PG, and I'm coming.”

Together with Beverley and Harrell, the formidable duo of George and Leonard will definitely impose a top-tier defense on the perimeter. On offense, both superstars will be joined by Lou Will, who put up 20.0 points and 5.4 assists per game for the Clippers last season.

Westbrook could be on his way out of Oklahoma

After 11 years of endearing himself to the basketball fans at Oklahoma City, Russell Westbrook could be heading to another city next season. With the recent blockbuster trade that saw teammate Paul George shipped to the Los Angeles Clippers, per Adrian Wojnarowski of the ESPN.

“Oklahoma City All-Star guard Russell Westbrook and his agent, Thad Foucher, are engaged with Thunder general manager Sam Presti about the next steps of  Westbrook's career, including the possibility of a trade before the start of next season, league sources told ESPN.

The two sides have 11 years of history together, and both understand that the time has likely come to explore trade possibilities for Westbrook, league sources said.”

With four years remaining on Westbrook’s $170 contract and the fact that the Thunder has nabbed a young star-caliber point guard in Shai Gilgeous-Alexander, Russ’ departure is already written on the wall. Not only that, but Shams Charania of The Athletic also points out that the league has become aware that George and Westbrook aren’t that happy playing for the Thunder.

“Rival NBA teams have been aware of the discontent of OKC's two stars: Paul  George -- and Russell Westbrook, league sources tell @TheAthleticNBA @Stadium. Leonard pushed the Clippers in recent days to deliver him a second star, and they did.”

Individually, Westbrook has been on a tear in the past few years. The departure of Kevin Durant to Golden State in 2016 paved the way for him to be the main man at Oklahoma, winning the MVP award during that season. Westbrook has also racked up three straight triple-double seasons, though his shooting percentages drastically dropped last season.

From a team standpoint, the Thunder haven’t been as successful in the playoffs as they were with Durant. They have bounced out of the first round in each of the past three seasons, so there was a dire need for change even before George and Leonard decided to team up this summer.

“The Houston Rockets are among the teams interested in trading for Oklahoma City   All-Star point guard Russell Westbrook, sources with knowledge of the team's thinking told ESPN.

One Rockets source, however, described trading for Westbrook as a "long shot" due to the challenge of finding pieces that fit with the Thunder or pulling off a complicated multiteam deal.”

The Rockets have long been searching for a team willing to take in Chris Paul’s massive contract. Reports earlier this offseason speculated that the star tandem of Paul and James Harden isn’t working anymore, and that the Rockets are now planning a revamp of the roster. The Rockets could entice the Thunder with a young rising big man in Clint Capela to pair with Gilgeous-Alexander, although it’s still difficult to imagine Oklahoma bringing in Paul as part of the deal. Even if the Rockets succeed in shipping Paul to Oklahoma, the tandem of ball-heavy guards Westbrook and Harden will pose more questions than answers for the Rockets offense.

Aside from the Rockets, The Athletic’s Sam Amick and Brett Dawson reported that the Pistons and the Heat are becoming the frontrunners for a potential Westbrook deal.

“And while the mountains of money owed to Westbrook are known to have scared quite a few general managers away, sources say that Detroit and Miami are very real possibilities as potential landing spots for the 30-year-old eight-time All-Star.”

Miami has been reiterating that the team will pursue another superstar to pair with recently-acquired two-way star Jimmy Butler. There are speculations that they will make a play for Washington Wizards combo guard Bradley Beal, but the Wizards are still firm in their vision of having Beal as their franchise player in the years to come. The Heat could dangle the expiring contracts of Goran Dragic and Meyers Leonard, along with defensive ace Justise Winslow.