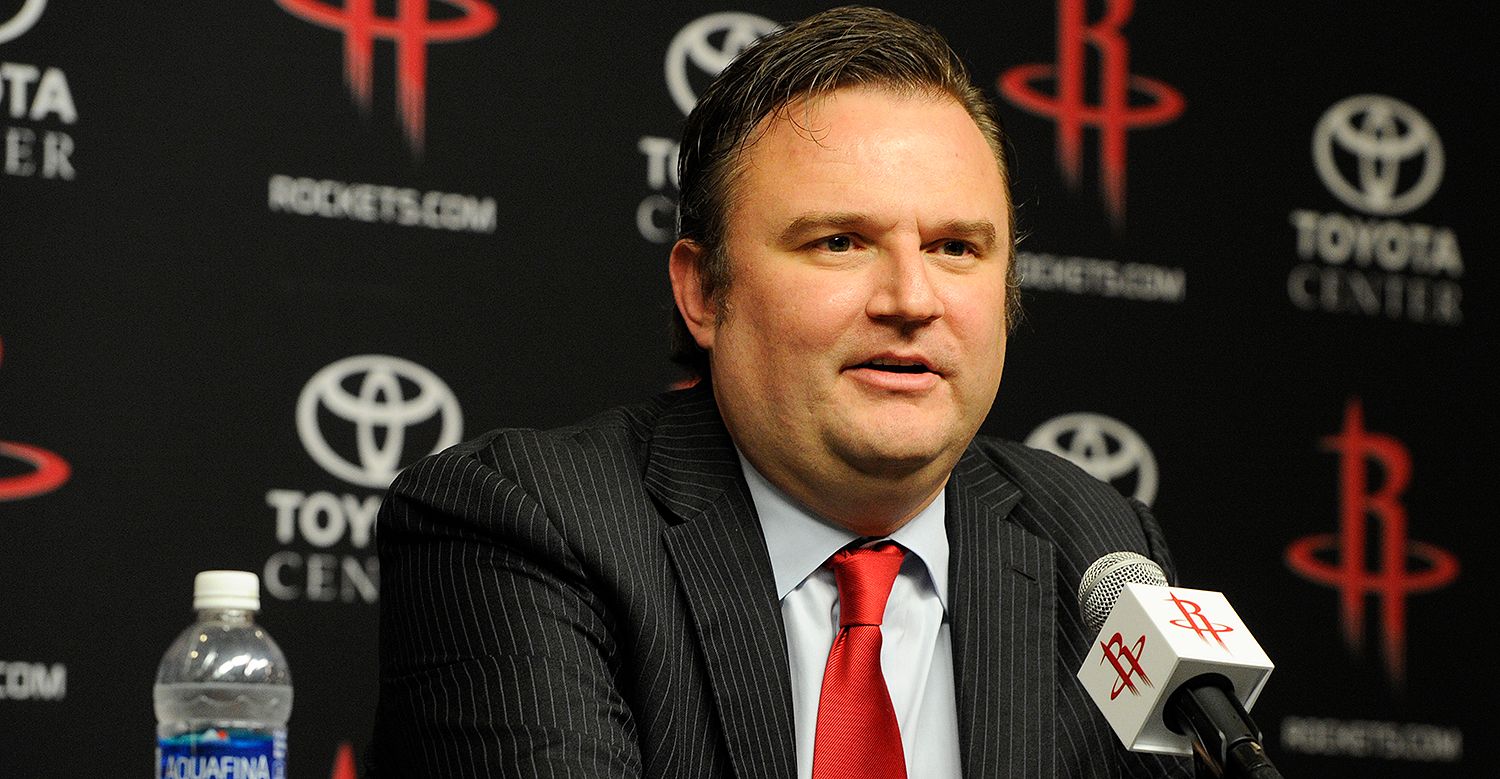 Daryl Morey is slowly making his presence felt after making his first big move for the Philadelphia 76ers. Morey, who was hired as the new president of basketball operations of the 76ers, has made it no secret that he wants to build a better team around All-Stars Joel Embiid and Ben Simmons.

According to Adrian Wojnarowski of ESPN, Morey and the 76ers decided to trade veteran Al Horford, the 34th pick in the 2020 NBA Draft, a protected 2025 first-round pick, and the draft rights to Serbian guard Vasilije Micic to the Oklahoma City Thunder. In return, Philadelphia acquired veteran guard Danny Green and Terrance Ferguson from the Thunder in the deal.

Horford, who only spent a season in Philadelphia, was earlier viewed as untradeable this offseason because of his expensive contract. The 34-year-old center signed a four-year, $109 million contract with the 76ers. When he signed with Philadelphia, he was viewed as a perfect fit and a solid veteran presence for the young squad, but the experiment did not work well, as Horford found himself losing his starting spot later in the season.

Morey said that the decision to trade Horford has nothing to do with the quality of play of the former All-Star. He pointed out that Horford was actually high on his list when he was still running the show for the Houston Rockets. The veteran executive had nothing but praises for Horford in his statement following the trade.

"I'd like to say, I haven't been here, but Al Horford is a really good player," Morey said. "I know there's been some buzz around fit and things like that, but honestly, we tried to sign him at my past team, and I don't like how that went down here because he's very good."

Aside from addressing the roster fit issues, the deal also has huge financial implications for the 76ers. Offloading Horford's contract saved them around $25 million in payroll and taxes, per ESPN. Danny Leroux also told The Athleticthat the deal was actually a huge win for Morey and the 76ers because it did not take them a lot of assets to dump the huge contract of Horford.

"This is a surprisingly cheap salary dump for the 76ers, who exchange Horford’s $69  million in guaranteed money for Green’s $15.4 million and Ferguson’s $3.9 million,"  Leroux said. "Offloading that sum for just a lightly protected future first and #34 looks good for Daryl Morey even before getting to Green really helping the 76ers this year as a better fit than Horford playing with their core."

Acquiring Green also makes a lot of sense for the 76ers. While the veteran guard struggled with his shooting during his playoff run with the Los Angeles Lakers last season, the 33-year-old is still considered as one of the best 3-and-D players in the league. Compared to Horford, he is a better fit for Embiid and Simmons because of his ability to knock it down from beyond the arc without sacrificing their roster flexibility.

Green, who has already won three championships with three different teams, would also bring his winning mentality in Philadelphia and his veteran presence inside the locker room. During his stints with the Lakers, Toronto Raptors, and the San Antonio Spurs, Green was one of the well-liked players in the locker room. Derek Bodner told The Athletic that while Green will not check all to boxes for Philly, he could play a critical role for the team next season.

"A career 40% 3-point shooter, the Sixers can certainly use as many players as possible who can put the ball in the basket from the perimeter," Bodner said. "Green can certainly do that. He doesn't solve some of the Sixers' other problems, as he doesn't create much at all off the dribble and has lost a step laterally as the 33-year- old enters his mid-30s. Still, Green should fill a role in the Sixers' perimeter rotation as he enters the final year of his contract."

As for the Thunder, the deal gave them another pick to add their huge haul of first-round picks in the next several years. Not only that, Horford could be the veteran presence that they need as they jump start their rebuilding process next season after losing Chris Paul to a trade with the Phoenix Suns. Erik Horne told The Athletic that Horford can still contribute in OKC and become a trade chip as well along the way.

"Horford is coming off a down year in Philly where he was played about a third of his minutes with little spacing next to Joel Embiid," Horne said. "Horford, 34, is past his prime, but he's a consummate pro who can space to the 3-point line and pass. He has three years left on his deal, but he's still a quality player and potential trade chip."

While the Horford deal was already a big win for the 76ers, Morey was not done yet. Morey and his front office struck another deal that would address another need for Philadelphia next season. The 76ers traded Josh Richardson and the 36th pick on Wednesday's draft to the Dallas Mavericks in exchange for Seth Curry.

Curry, who played 64 games for the Mavericks last season, would give the 76ers another three-point threat around Embiid and Simmons. The 30-year-old guard averaged 12.4 points on 49.5 percent shooting from the field, including an impressive 45.2 percent clip from beyond the arc. Morey said that Curry's ability to shoot from beyond the arc at a high level was obviously the reason why they traded for him on Wednesday.

"Those who watch the Sixers up close and personal -- like you have longer than me -- when Joel and Ben have had that, it's actually insane how good those lineups and how good those teams played when everyone was healthy," Morey said via ESPN. "So that was really the theme for tonight. Getting Seth -- you can argue for him as the best shooter in the NBA -- was really exciting."

Richardson was a factor for the 76ers on both ends of the floor last season. In 55 games, including 53 starts, the 27-year-old guard averaged 13.7 points and 3.2 rebounds for the 76ers, and was often tasked to defend the best perimeter player of the opposing team. According to Derek Bodner of The Athletic, the two deals of the 76ers might look bad in terms of the productions of players involved, but he feels that both trades make a lot of sense because Morey's main goal was to improve the fit of Embiid and Simmons' supporting cast.

"Horford is a more talented player, even at this stage of his career, than Green. Richardson is a better overall player than Curry," Bodner said. "It would be easy to come away disappointed with the Sixers’ night if you looked at just the names on the back of the jerseys, without any concern whatsoever applied to fit, contracts and maneuverability. But basketball requires deeper inspection than that."

It remains to be seen whether or not the 76ers are done dealing, as they are also being linked to several players like James Harden and Russell Westbrook. The free-agency period is also set to begin on Friday, and the 76ers might be an attractive destination for players chasing a title now that Morey is at the helm in Philly.

Veteran point guard Ricky Rubio is set to return to the team where his NBA career started. Multiple reports confirmed that the Minnesota Timberwolves acquired Rubio from the Oklahoma City Thunder. Rubio recently moved to Oklahoma City as part of the trade that sent Chris Paul to the Phoenix Suns.

The Timberwolves sent James Johnson and Aleksej Pokusevski, the 17th pick on Wednesday's draft, to the Timberwolves in exchange for Rubio to go along with 25th pick Immanuel Quickley and 28th pick Jaden McDaniels. The deal was consummated shortly after the Timberwolves also selected Georgia standout Anthony Edwards as the first overall pick in the 2020 NBA Draft.

According to Michael Kaskey-Blomain of CBS Sports, the deal for Rubio was a solid and exciting move for the Timberwolves, who looked ready to contend at least for a playoff spot in the stacked Western Conference next season. Rubio is expected to be a good fit alongside D'Angelo Russell and Karl Anthony-Towns, and he is also no stranger to Timberwolves fans, having spent the first six seasons of his career in Minnesota.

"Rubio could provide the team with a combination of on-court production and veteran leadership," Kaskey-Blomain said of the deal. "He played for the Wolves for six seasons previously, so he is very familiar with the franchise and the city of Minnesota, so his adjustment should be minimal, which is good since the season is coming up quickly."

Rubio, the fifth overall pick of the Timberwolves during the 2009 NBA Draft, is coming off a strong season for the Suns. In 65 games for Phoenix, the 30-year-old playmaker averaged 13.0 points and 8.8 assists to go along with 1.4 steals per game. He was instrumental in Phoenix's 8-0 stint inside the NBA bubble but became expendable when the Suns got the chance to acquire superstar point guard Chris Paul from the Thunder.