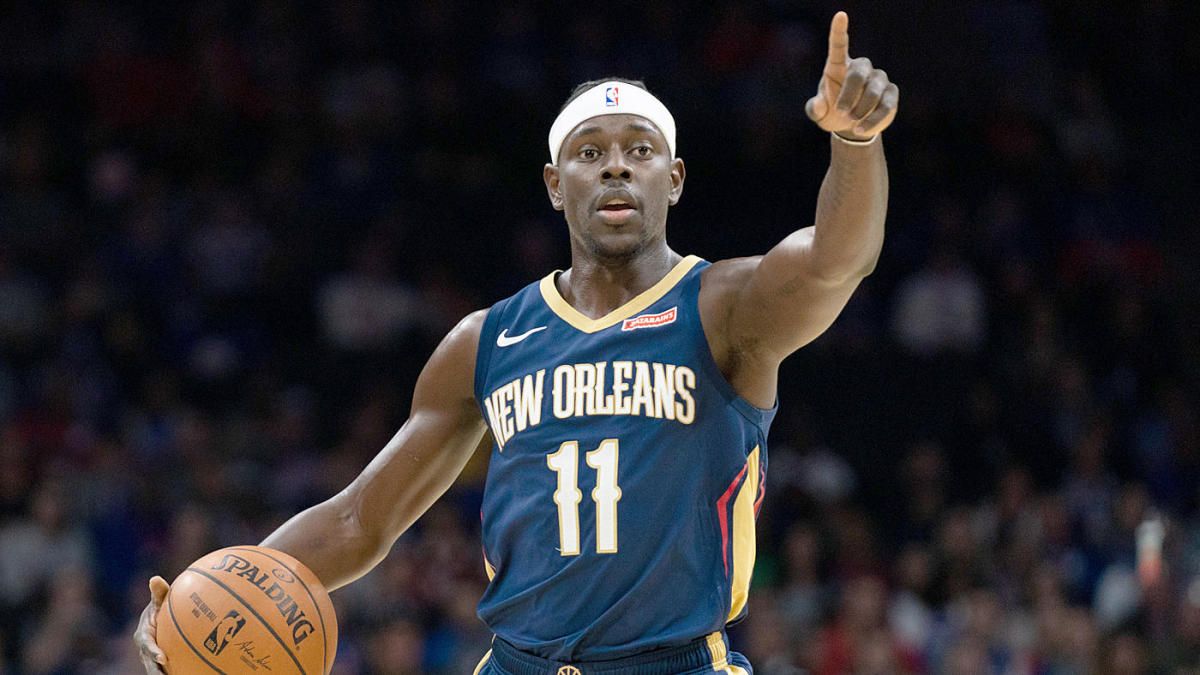 The Denver Nuggets are aiming to shore up their roster after reaching the Western Conference Finals last season. Although they fell short and were defeated by eventual champions Los Angeles Lakers in five games, the Nuggets are expected to become a force in the years to come with their young core of Jamal Murray and Nikola Jokic along with promising forward Michael Porter Jr.

This early, the Nuggets are already being linked to several players, who could help them get over the hump next season. According to Vincent Goodwill of Yahoo Sports, the Nuggets are one of at least 10 teams who are interested in acquiring New Orleans Pelicans guard Jrue Holiday, who is expected to become one of the most sought-after player on the trade market this season after coming off another strong season.

"Around 10 teams are inquiring about his services and one team hot after him is the Denver Nuggets, eager to capitalize on their appearance in the West Finals," Goodwill said of Holiday. "Holiday, an All-Defense performer capable of playing both guard spots, averaged 19.1 points and 6.7 assists for the Pelicans this past season and seemingly could fit in with the Nuggets’ youth and recent experience."

Goodwill added that he will not be a high-risk target for the Nuggets because he is still under contract in the next two seasons, including a player option for the 2021-22 NBA season. He also believes that the Pelicans will likely look to shed salary, especially now that they are entering a new era under new head coach Stan Van Gundy. The Pelicans have a young core led by Brandon Ingram, Zion Williamson, Lonzo Ball, Josh Hart, and Jaxson Hayes.

However, it remains to be seen how the Nuggets could make a room for Holiday, considering the fact that they are already committed to maximum deals with Jokic and Murray. They also have a key player in Jerami Grant, who could command a lot in free agency to stay in Denver. But regardless of the price that they need to pay, Zach Mikash of SB Nation strongly believes that the Nuggets should chase Holiday this offseason.

"Jrue and the Nuggets feel like a match that’s been waiting to happen for years, not unlike how Paul Millsap and the Nuggets felt the same way a few seasons back,"  Mikash said of a possible Holiday trade to Denver. "Ultimately the Nuggets waited until they had the cap space to give Millsap a very lucrative offer, but neither they nor the Pelicans have that luxury with Holiday. Denver is in win now mode."

Holiday will be an interesting player to watch out for when the league allows team to talk about possible trades. The 30-year-old point guard has been mentioned in numerous trade rumors, but it remains to be seen how it will change with Van Gundy now at the helm in New Orleans. Van Gundy is known as a defensive-minded coach, and a defensive-minded guard might be exactly what he needs to succeed in New Orleans.

The Indiana Pacers are also expected to consider making major roster moves this offseason, as they are also set to have a new system in place. The Pacers fired Nate McMillan after being swept by the Miami Heat in the first round of the 2020 NBA Playoffs and hired Toronto Raptors assistant coach Nate Bjorkgren as their new head coach. With a new coach place, there is a good chance that Indiana will consider trading some of their biggest assets.

According to Ian Begley of SNY, the Pacers are reportedly still interested in acquiring Gordon Hayward from the Boston Celtics. Hayward could become a free agent if he opts out of his deal for next season, but it is widely expected that he will exercise his $34.19 million player option next season. He could be a trade candidate for Boston, but it remains to be seen whether or not they will pull the trigger on any trade involving the veteran forward.

"Something to keep an eye on once we find out when NBA teams can start making trades: some within the Pacers organization continue to have interest in trading for Celtics’ Gordon Hayward," Begley said. "It’s unknown what Boston would want in return for Hayward -- or if the club is even open to moving him."

Hayward missed the majority of the playoffs after suffering an ankle sprain, but he had a relatively strong season for Boston. The 30-year-old started in 52 regular-season games, where he averaged 17.5 points on top of 6.7 rebounds and 4.1 assists per game, which are all his highest production in the three categories since the 2016-17 season when he was still with the Utah Jazz.

Right after their NBA bubble exit, Hayward's name has floated around the trade chatters and is always being linked to the Pacers. One factor is he is from Indiana and would love to play for his hometown team. The Pacers are also being named as an ideal trade target because they have several players, particularly Myles Turner and Victor Oladipo, who are reportedly open to getting traded this offseason.

"Indiana is still home for the Haywards, and with Victor Oladipo looking to move on this offseason, according to sources, and Myles Turner possibly in the same boat, there could be an opportunity for Ainge to move Hayward and the abundance of draft picks in his war chest in a mutually agreeable way," Jared Weiss of The Athletic reported. "Boston won’t have cap space again with three stars locked up long-term, so moving Hayward or Marcus Smart presents one of the few opportunities to get back a  player making starter-caliber money."

However, things have changed in Indiana since then, particularly now that they have a new coach in place. Oladipo has denied rumors about his trade desires, saying that he would love to continue playing for Indiana despite failing to reach a contract extension agreement. Pacers team president Kevin Pritchard also likes their chances of keeping the two-time All-Star guard and feels Bjorkgren would be a factor.

"We have Victor for another year," Pritchard said via Empire Sports Media, when  asked about the Oladipo situation. "At the end of the day in re-signing Victor, if that’s what he wants to do because we can give him a five-year deal, major bumps versus other teams. So the way the CBA was crafted, home team has huge advantage. We feel Nate will build incredible relationships with our players."

During his introduction as the new head coach of the Pacers, Bjorkgren revealed that one of the first things that he did when he was hired was talk to Oladipo. He revealed that he had a positive talk with the veteran guard about his role in the team. The 45-year-old head coach also feels that Turner will continue to become a vital cog in Indiana despite the development of Domantas Sabonis, who made the All-Star team for the first in his career last season.

The Los Angeles Lakers are not expected to relax despite winning the 17th championship in franchise history last season. The Lakers know that superstar LeBron James is not getting any younger and they would want to get the most out of the remaining years of the four-time NBA Most Valuable Player. The Lakers are actually already being linked to several big names, including Chris Paul and Derrick Rose.

A Western Conference executive told Eric Pincus of Bleacher Report that the Lakers are expected to reach out to the Oklahoma City Thunder about a possible trade for Paul. James and Paul are known to be close to each other, and have made it known before that they would like to play together at some point of their careers. Paul might be traded, especially if the Oklahoma City Thunder goes on a full rebuild.

On the other hand, one general manager told Sean Deveney of Heavy that the Lakers might acquire Derrick Rose in the offseason. The Lakers reportedly tried to trade for Rose before the deadline in February, but the they failed to convince the Detroit Pistons to agree to a deal. However, the general manager said that the Pistons are now more open to trading Rose for the right price.

If the Lakers will have to select between Paul and Rose, Jason Reed of Lake Show Life believes that the Lakers should go after the former NBA Most Valuable Player. Los Angeles might lose Rajon Rondo in free agency, and Reed thinks that Rose would be the perfect replacement for the veteran point guard.

"The Lakers don’t need a ball-dominant point guard that is going to play a lot of minutes. They need someone who can be ball-dominant when needed but does not need as big of a role to succeed. They need someone to essentially replace Rajon Rondo, who will reportedly test the free-agent market this offseason. That someone is Derrick Rose," Reed said. "Rose could essentially serve as the Lakers’ sixth man."

Reed also added that trading for Rose would be easier than trading for Paul. Rose has one year left in his deal that would pay him $7.68 million next season. Paul, on the other hand, might be too expensive for the Lakers, as he still has two years left in his contract worth around $85.56 million.