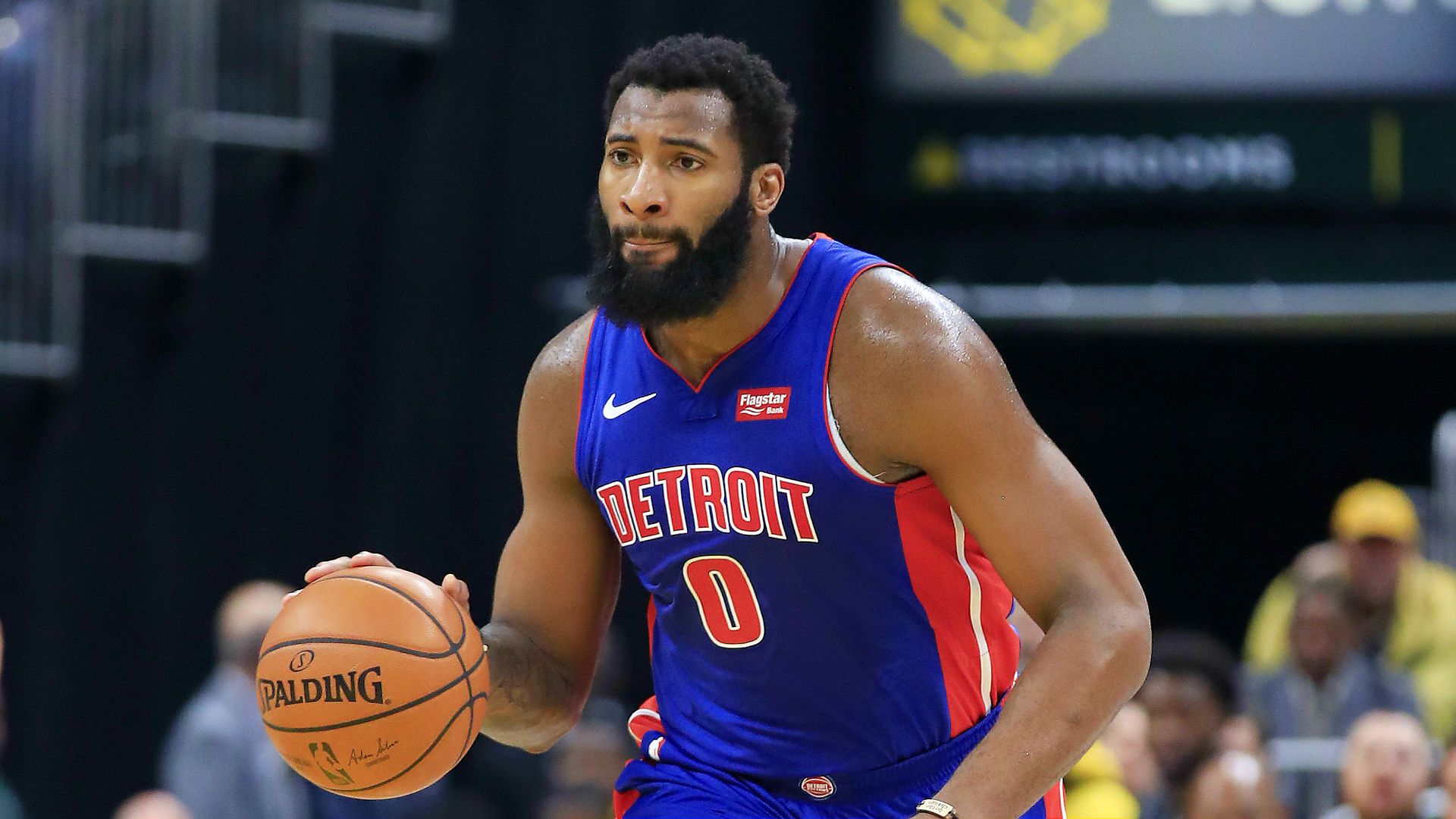 Pistons star big man is not quitting on his team

Despite hauling in superstar Blake Griffin a couple of seasons ago, the Detroit Pistons have not seen any drastic improvements in terms of team success. They made the playoffs last season while sporting a 41-41 regular season record, but they stood no chance to the Giannis Antetokounmpo-led Milwaukee Bucks. Even with a former Coach of the Year Dwane Casey at the helm, the Pistons have stayed as a playoff pretender in the Eastern Conference.

One of the main reasons why the Pistons have failed to become a perennial contender is the fact that their frontcourt punch of Griffin and Andre Drummond is not working well. While Griffin has recently displayed much-improved long-range shooting and ball-handling skills, his trump card still lies on his ability to score from the inside. Drummond is still yet to inject a consistent mid-range shot, making it very difficult for the Pistons to space out the floor when the two of them are playing together.

With Drummond entering unrestricted free agency in the summer of 2020, there are speculations that the Pistons front office will try to trade him mid-way through this season. Instead of just letting their star big man walk in free agency, a potential trade deal centering on Drummond would net them future draft picks and even young budding players projected to become stars in the next few years.

Yet, the 26-year old big man has recently reiterated his commitment to play for the Pistons beyond this season. Drummond emphasized that he is not bent on quitting on the team, and that it is his desire to spend the rest of his basketball career in Detroit, as per Vince Ellis of the Detroit Free Press.

“I’m not a quitter, never brought up to be a quitter. I started here, and I’m trying to finish here and try to complete the mission of winning a championship here. It’ll never be me that wants to go anywhere.

I’d love to play the rest of my career here.”

However, there are already multiple reports saying that the Pistons front office has indeed talked to other teams for a potential Drummond trade. ESPN’s Adrian Wojnarowksi even went on to say that the Pistons are already in serious talks with the Atlanta Hawks, a team who is highly-expected to engage in multiple trades before the February trade deadline.

The Hawks have discussed sending a package that includes a 2020 first-round pick via the Brooklyn Nets and the salary-cap relief of expiring contracts for Detroit, league sources said. A potential deal would include other assets.”

Drummond, a two-time All-Star, still has a $29 million player option for the 2020-21 season. However, it’s almost certain that Drummond will be able to command a max contract from other teams if he declines to opt in. Now in his 8thyear in the league, the hulking big man is averaging a career-high 17.4 points, on top of his 15.9 rebounds, 2.6 assists, 2.0 steals and 1.9 blocks per contest. An athletic, mobile center who imposes his presence down low, Drummond still has glaring weaknesses. He is a career 46% free throw shooter, and hopes are dimming that he can extend his offensive repertoire to include a solid mid-range jumper.

Aside from the Hawks, Vincent Goodwill of Yahoo Sports also reported that there are other teams about to engage the Pistons in offers for the All-Star center.

“Boston, Dallas, Toronto have also registered interest in Andre Drummond, according to sources. Drummond has relationships with Kristaps Porzingis and Kyle Lowry.”

With the exception of the Raptors, both the Celtics and the Mavericks are in dire need of a solid rim-protector and defender. Losing the ever-versatile Al Horford last summer has robbed the Celtics of a perennial defender in the paint. Right now, they have Enes Kanter, Daniel Theis and Robert Williams lined up on their frontcourt. While those three big men can be a bit effective in switching on multiple position on the defensive end, none of those names can contain the likes of Joel Embiid and Nikola Jokic.

As for the Mavericks, there’s no doubt that Drummond can blend better with Porzingis than with Griffin. Even with his 7-foot-3 frame, Porzingis’ game extends beyond the three-point line. Most importantly, Drummond can benefit from the playmaking of Luka Doncic, especially in pick-and-roll situations.

Of course, it all boils down to the package that the Pistons could receive for their star big man. D.J. Foster of The Ringer hints out that the Pistons might find it difficult to command an alluring package for a traditional center like Drummond.

“While a contender could view Drummond as a short-term rental, someone will be stuck with the bill for him soon, and spending max or near-max money on anyone who doesn’t space the floor creates a higher degree of difficulty, both for roster- building purposes and postseason play.”

Still, there’s no doubt that Drummond will be an excellent upgrade over the current frontcourt players of those four teams mentioned in the trade rumors. A change of scenery could even motivate Drummond to exert more effort and play with more fire, something that has been missing from him in his career.

The Golden State Warriors are experiencing a down year this season, but that hasn’t change their stance on returning to their elite championship contender status in 2020. Ethan Strauss of The Athletic recently reported that the Warriors front office are now eyeing a potential trade deal for Minnesota Timberwolves superstar Karl-Anthony Towns.

“The Warriors have been monitoring Karl-Anthony Towns’ situation in Minnesota. He’s under contract until 2023-24 but has less reason than (Giannis) Antetokounmpo to be thrilled with his team’s trajectory. This was a topic among multiple team executives at the recent G League Showcase, with a few relaying word that Towns is unhappy in Minnesota.

While the Wolves might dream of a scenario where (D'Angelo) Russell teams up with his good friend Towns, the Warriors have a differing vision of how a trade between  the two franchises could shake out.”

Towns, 24, has been an All-Star for the past couple of seasons. He is averaging a career-high in points with 26.5 this season, on top of 11.7 boards, 4.4 assists, 1.0 steals and 1.3 blocks per contest. Despite already having an excellent low-post offensive game, Towns has been deadly from the three-point line. He has cracked the 40% clip since the 2017-18 season, and is shooting at a very high 41% from beyond the arc this year.

Interestingly, Warriors’ newly-acquired star guard D’Angelo Russell was expected to sign with the Wolves last summer. There were already reports saying that the Russell signing is already a done deal for Minnesota, but the Warriors would succeed in negotiating a sign-and-trade move with the Brooklyn Nets. Kevin Durant went on to sign with the Nets, while Russell agreed to a max contract with the Dubs.

Furthermore, Towns has developed a very close friendship with Russell. During a sit-down hosted by GQ Sports’ Youtube, Towns emphasized that he wants to form a super trio with close friends Russell and former college teammate Devin Booker.

“Preferably for me it would be (on) the Timberwolves, so they’ll be in Minnesota, hopefully, one day. I’m gonna speak it into existence. I don’t know if it’ll happen, but I  want it to."

As for Russell’s part, he also chimed in on the possibility of playing alongside Towns and Booker as the three stars shared the cover of the 2019-20 NBA preview issue of SLAM Magazine.

With Stephen Curry and Klay Thompson out with injuries, Russell has been leading the Warriors in scoring this year. He has been great when he is playing, but the lefty scoring guard has also been hounded by injuries this season. Should the Warriors pursue Towns through a trade in the future, it’s difficult to imagine how they would move the pieces around to entice the Wolves to let go of their superstar.